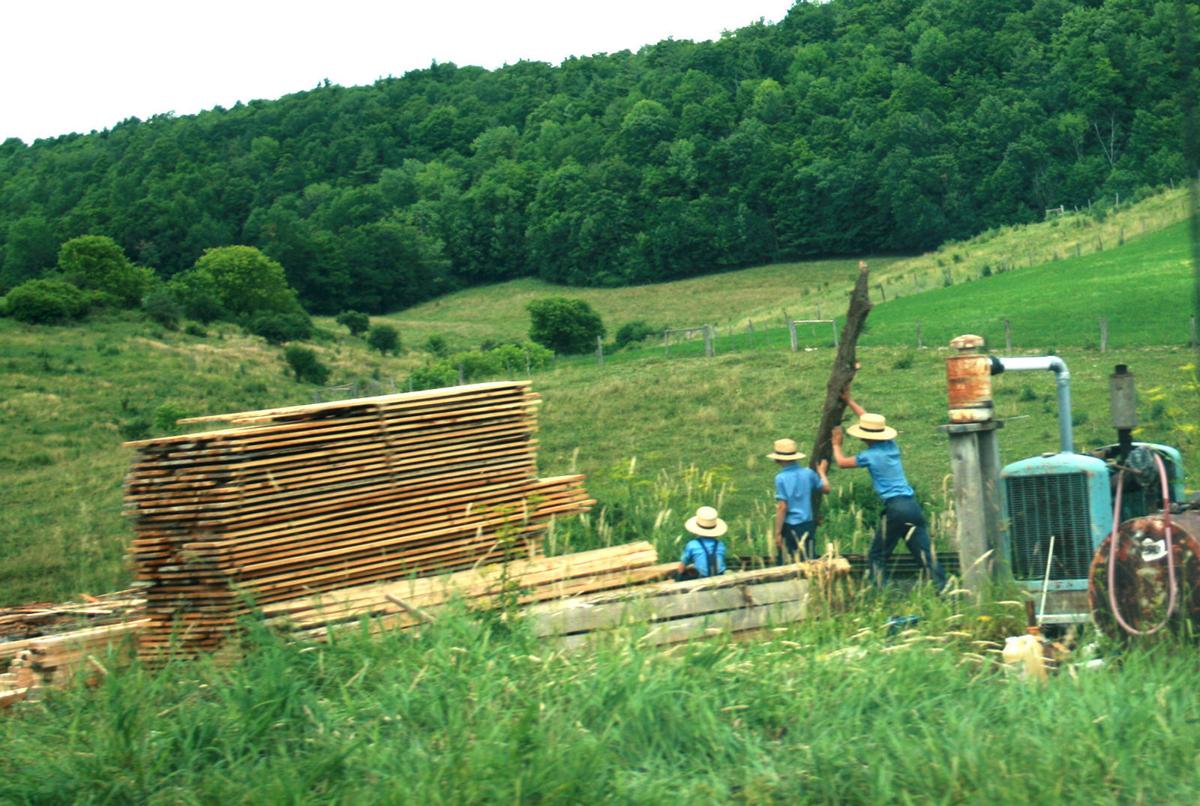 Amish boys at a farm on county Route 12 move a piece of wood out of the way as they mill wood for a new sawmill. 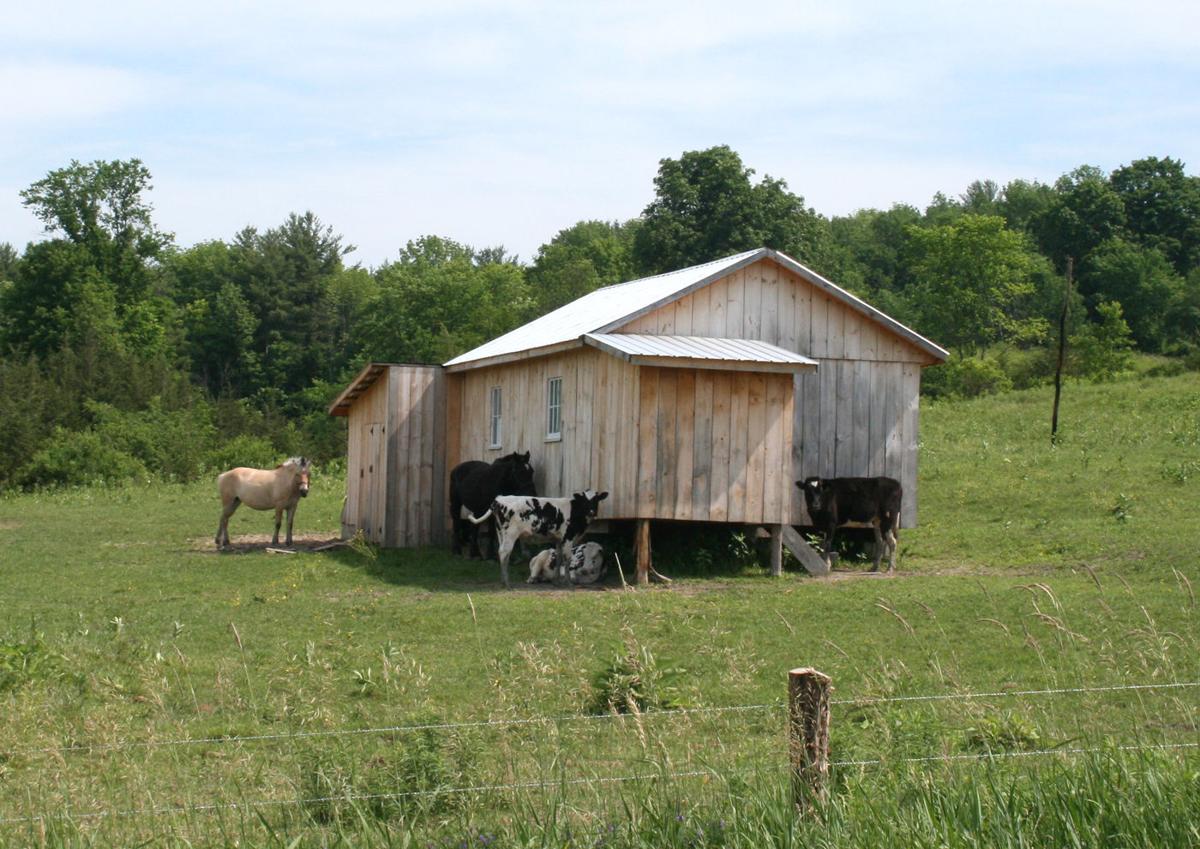 With school out for summer recess since June, this Amish schoolhouse on county Route 18 in Whitehall has become a hangout spot for cows and horses. Amish children walk to school and attend through the eighth grade. 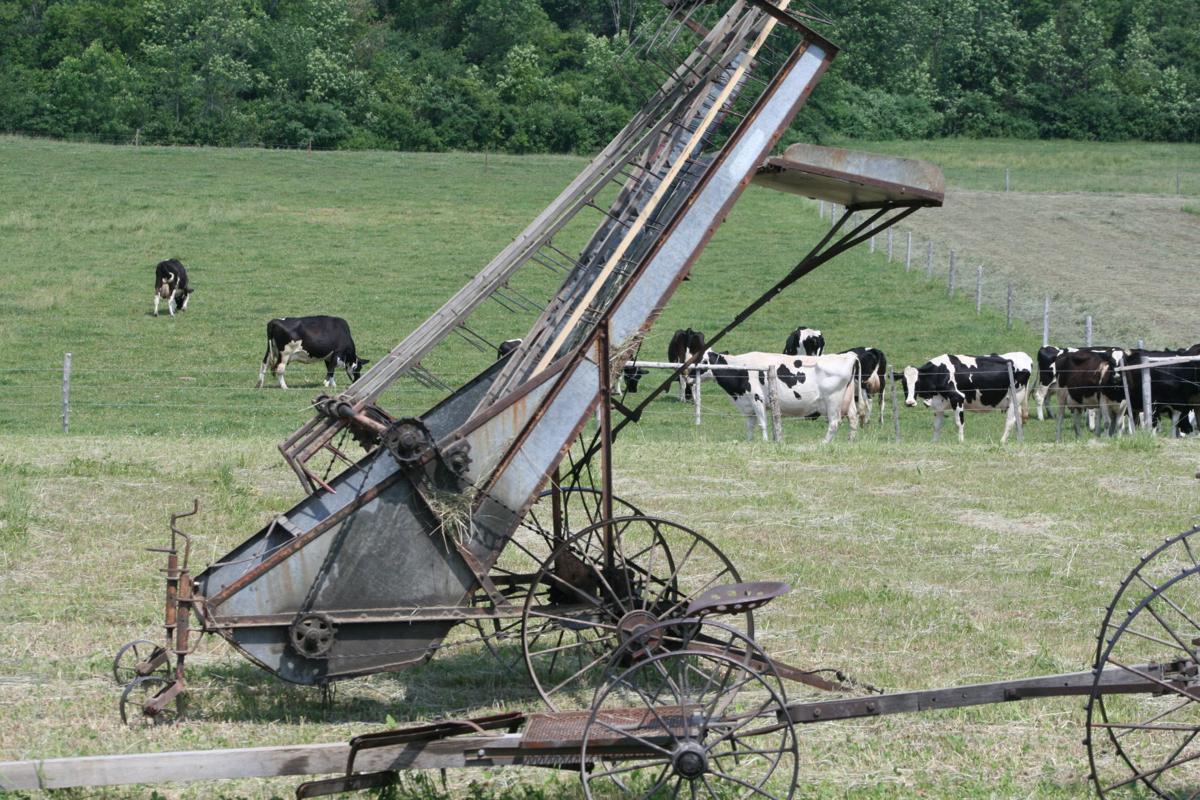 Equipment used by the Amish in the production and transportation of hay sits in a a field on Upper Turnpike Road, as the farm's dairy cattle graze in the background.

Editor’s note: This is part two of a three-part series on the Amish community in Whitehall and Hampton. It was sensitively reported and photographed, keeping in mind that Amish people generally avoid media interviews and shun photographs for religious reasons. All photos were taken from public roadways and attempted to avoid faces. The few Amish individuals interviewed were told it was for stories on them and their new community and agreed to talk without the use of names.

They all wear the same style clothes and hats. They use no electricity, use horses and buggies to get around instead of cars, outhouses instead of indoor toilets, and they farm the land as farmers did long before the tractor.

Why do the estimated 200 Amish residents on 16 farms in Whitehall and Hampton shun modern technology in favor of tradition and a simpler life?

Experts say the Amish lifestyle is rooted in both tradition and in strict adherence to the Bible. And the rules governing each Amish settlement are spelled out in what they called the “Ordnung,” which may vary from group to group.

“They want to live a scriptural life. They want to follow Christ’s example,” said Karen Johnson-Weiner, a SUNY Potsdam professor who has written extensively on the Amish, including in a book, “New York Amish: Life in the Plain Communities of the Empire State.”

She said the Ordnung contains rules and traditions that were decided upon by “good church members over generations.” Although the Ordnung can flex, she said, many principles governing the lives of the Amish have remained in place for many years.

“There’s not a scriptural reason why they don’t drive cars or buy a smart phone, but over the years there’s an understanding that these kinds of things will have an impact on the community and it will make it much harder to follow Christ’s example,” she said.

Edsel Burdge, research associate for the Young Center for Anabaptist and Pietist Studies at Elizabethtown College in Pennsylvania, said the Amish are Christian people who apply the biblical principle of separation from the world regarding clothes, technology, transportation and leisure.

Burdge said the Whitehall Amish are a “daughter settlement” of the Amish community in Fort Plain, New York, which was a “sub-group” of the New Wilmington, Pennsylvania Amish.

This New Wilmington group tends to be more conservative and to focus on farming compared to the well-known Lancaster, Pennsylvania Amish, where tourism now is king.

But many of the rules governing their lives are the same, he said.

Their attitude toward photographs and media attention is an example, he said. The Bible states that “Thou shalt not make unto thyself a graven image,” and the Amish translate that to include photographs, which is why they prefer not to be photographed, Burdge said.

But their lack of interest in media attention stems more from their desire for a humble, communal lifestyle, he said.

“They place a strong emphasis on humility and not being singled out individually,” he said.

Amish men are the decision-makers in their communities. They serve on the school board that governs their one-room schoolhouses, and they decide when barns and homes are built.

If you buy items at a stand when both the husband and wife are present, he will likely be the one talking to you.

Despite public appearances, she said the relationship between Amish husbands and wives is a true “partnership.”

“One Amish man told me, ‘I wear the pants in the family, but my wife tells me which ones to put on,’” she said, adding that she has retold that story to Amish residents and gotten lots of laughs.

She said both husband and wife are scripturally obligated to serve each other, and though the men are seen as the speakers and decision-makers, the women are often behind the decisions being made.

“I had someone on a school board tell me they voted on something and then they went home and talked to their wife and came back and did what they were supposed to,” she said. “Often, the Amish man is the face of the Amish to the outside world and is considered head of the family, but he has a scriptural responsibility to her and to listen to her, and they consider things together.”

Amish children go to school through the eighth grade. The belief is that by the time they hit that level, they’ve had enough formal education to allow them to function in their community and it’s time for vocational skills to take over so they can prosper on the farm, Burdge said.

“They’re essentially getting the three R’s, probably not a lot of science,” Burdge said. “But you’re going to have very few Amish leaving school who can’t read and do arithmetic — and that’s not true with public schools.”

Ruth Scribner, wife of former Whitehall Supervisor Vernon Scribner, whose farm neighbors an Amish farm, said one of her neighbor girls is a voracious reader. She said she supplies the 18-year-old with newspapers to read and loves chatting with her about news.

“She goes through every one I bring,” Scribner said. “One day I saw her and she said, ‘I have a surprise for you!’ She had found two clippings about me and was so proud.”

The traditional Amish beards without mustaches, according to Burdge, are a sign that a man is married. Sometimes, he said, the facial hair can start in the days leading up to a wedding, but generally a beard on an Amish man means he has already wed.

And although the Amish are very religious, they don’t worship in churches. Church services are held in homes — every other week. And to be chosen to host the church service is a big deal, Burdge said.

“It will involve a major cleaning and maybe even painting,” he said.

Both Burdge and Johnson-Weiner said the Amish aren’t anti-technology. In fact, a tour of Amish farms in Whitehall reveals gas-powered sawmills and gas-powered wringer washing machines. They will also accept rides in cars and will use a neighbor’s phone or chainsaw and will always want to pay the neighbor who helped them.

The Ordnung simply prohibits ownership of these items, and Burdge said the steel-wheeled buggy mandate has another purpose. Being restricted to travel by horse and buggy means less access to the outside world and its pressures and temptations, he said.

“They don’t say cars are wrong, they say the horse and buggy helps maintain the community,” he said.

The same with computers, smart phones, televisions, radios and power tools, he said.

And although the Amish do pay sales tax on items they sell, school tax for schools their kids don’t attend and property taxes, they don’t pay Social Security taxes — nor do they collect benefits. They also don’t have to abide by local codes that would alter their religious freedom by dictating how they live — and are not required to have insurance of any kind.

“They believe it’s their responsibility to take care of their people,” he said. “And ultimately they feel they should be depending on God, not the government.”

In Whitehall Town Hall hangs a two-page letter from the town attorney, essentially spelling out that the town legally can’t tread on the religious rights and beliefs of the Amish community when it comes to code issues like indoor plumbing and smoke detector use.

“When dealing with specific enforcement issues with the Amish, the town will need to consider if enforcement of the law can be done in such a way that limits or narrows infringement upon Amish beliefs,” the letter reads.

But despite all those differences, there are a lot of similarities between the Amish residents and the rest of the town’s residents.

One Amish farmer on county Route 11 seemed a little perplexed that a reporter was standing in his shed, surrounded by bent hickory chairs and tables and stacks of saplings in the background to make more, asking questions.

But he was cordial and the conversation moved from the $150 chairs, to the sheds his sons were building, to Danby, the town in Vermont where he bought the silo that had to be dismantled, moved and rebuilt on his farm.

He spoke about high taxes and about building a new house, but he also seemed to want to dispel any notions that the Amish are different from the rest of the community.

And that’s a message Ruth Scribner wanted to convey, too, as she told a story about a funny encounter with a neighbor boy. She was in her car and he was on his horse-powered buggy when he threw out a challenge to “Miss Ruth.”

“You wanna race?” he said to her with a smile.

“I got more horses than you do,” she replied with a just-as-big smile.

Scribner said her new Amish neighbors are extremely friendly and helpful. When she recently broke her neck in a car accident and was recuperating at home, she said the Amish women, men and children were stopping by to check on her to make sure she was OK.

“They’re very good neighbors,” she said. “I go to visit them and I call their kids my kids. They’re growing up right in front of me.”

Burdge, too, stressed that the Amish like to laugh as much as anyone.

“You should hear about the practical jokes they pull on the bride and groom during weddings,” he said with a laugh. “They’re definitely not humorless.”

Amish boys at a farm on county Route 12 move a piece of wood out of the way as they mill wood for a new sawmill.

With school out for summer recess since June, this Amish schoolhouse on county Route 18 in Whitehall has become a hangout spot for cows and horses. Amish children walk to school and attend through the eighth grade.

Equipment used by the Amish in the production and transportation of hay sits in a a field on Upper Turnpike Road, as the farm's dairy cattle graze in the background.