Please subscribe to keep reading. You can cancel at any time.
Already a subscriber?
Log in or Activate your account.
Loading&hellp
No thanks, return to homepage.
{{featured_button_text}}
1 of 9 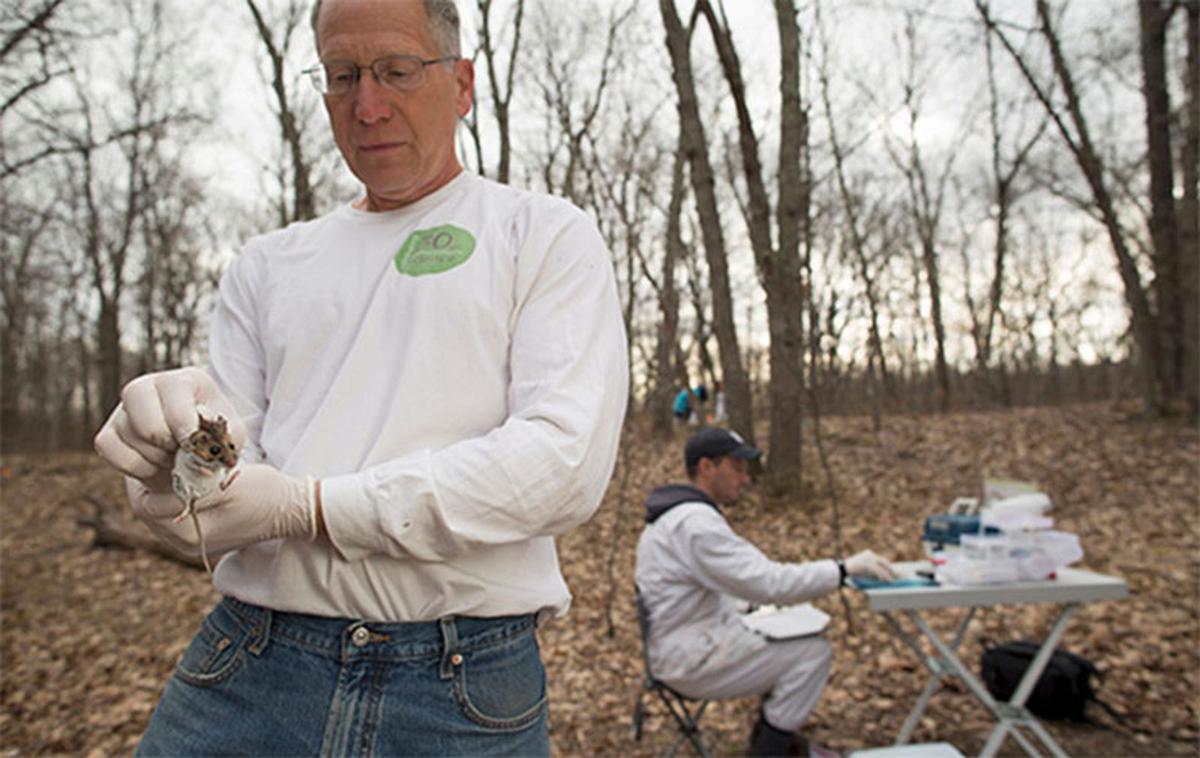 Dr. Richard S. Ostfeld, senior scientist at the Cary Institute of Ecosystem Studies in Millbrook, studies populations of white-footed mice and the black-legged ticks that feed on the mice. Researchers at the institute predict this will be a particularly bad year for ticks. 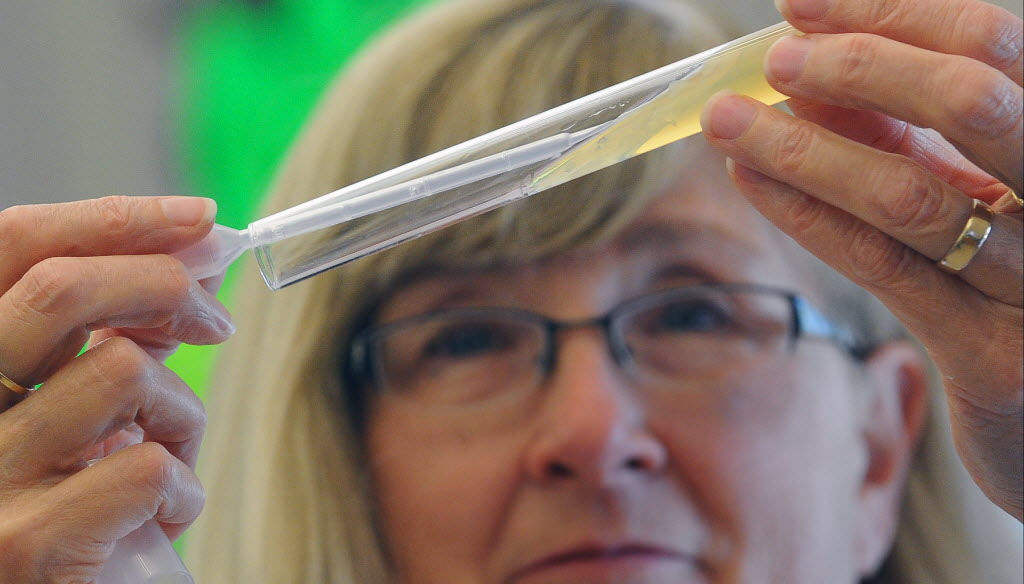 These maps created in 2015 show an increase in the number of Lyme disease cases over time. 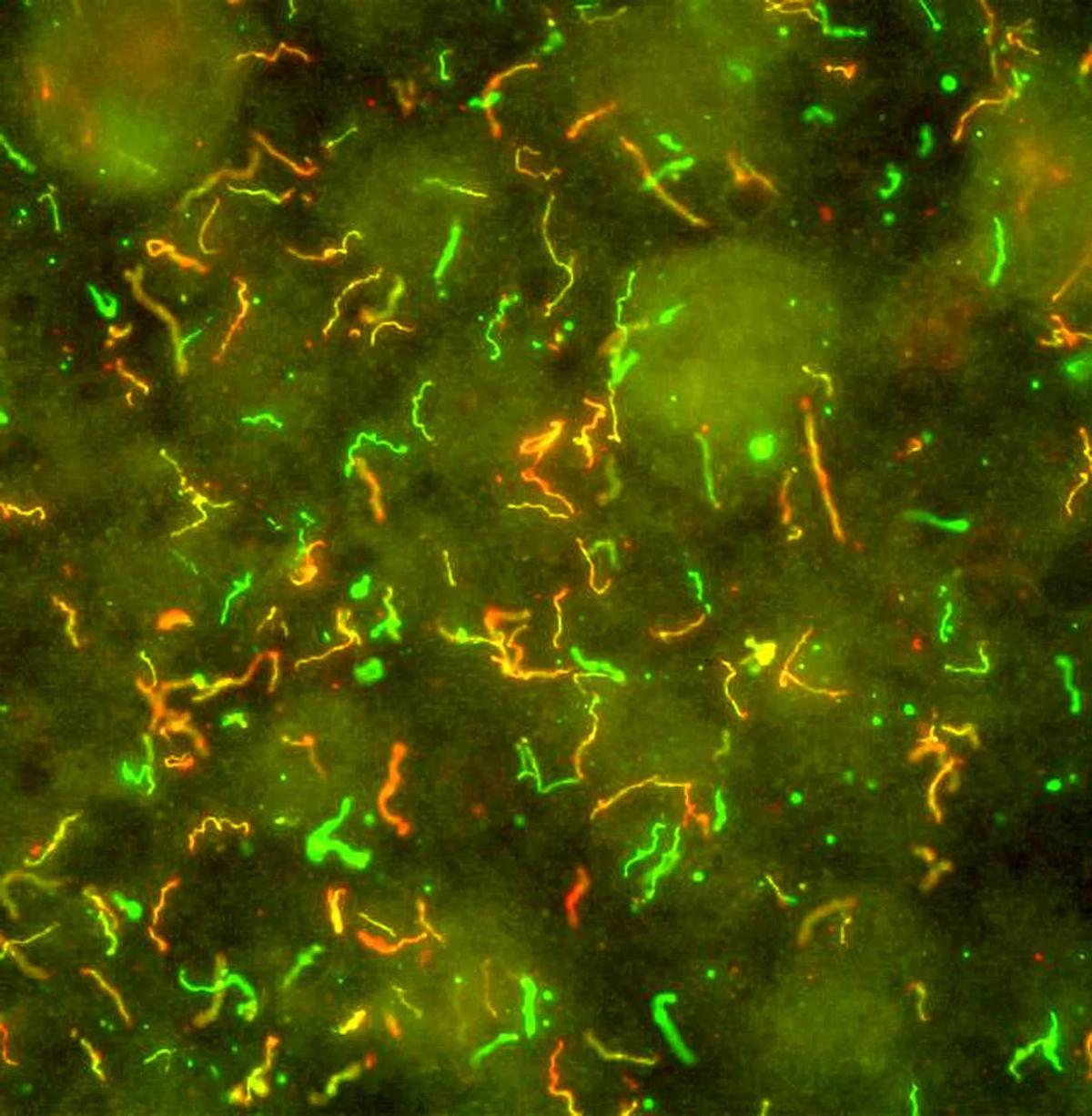 This confetti-like image is Borrelia burgdorferi, the bacteria that causes Lyme disease. 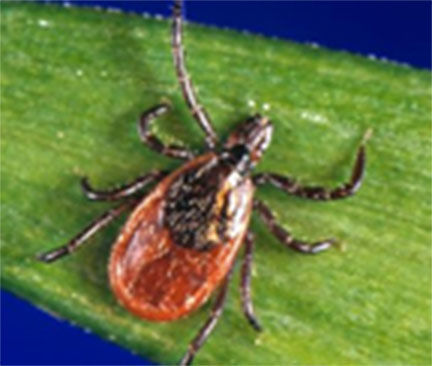 Associated with woodland areas, the black-legged tick can carry multiple pathogens and is responsible for the spread of Lyme disease, babesiosis, anaplasmosis and Powassin virus. 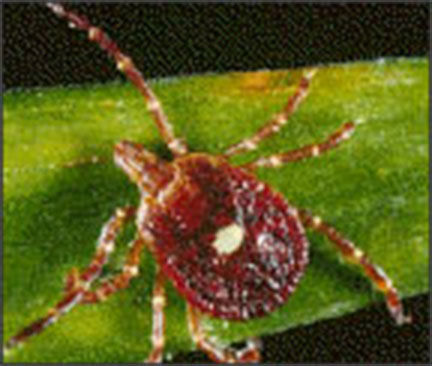 The Lone Star tick is a woodland tick and is known to transmit ehrlichiosis. 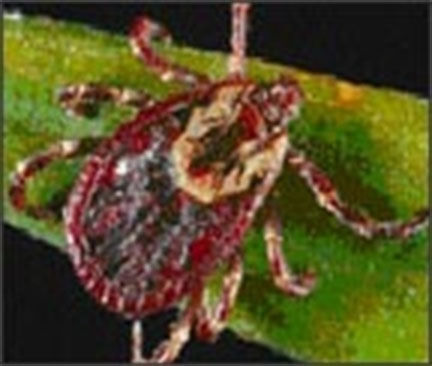 The American dog tick is found in grasslands and is known to transmit Rocky Mountain Spotted Fever. 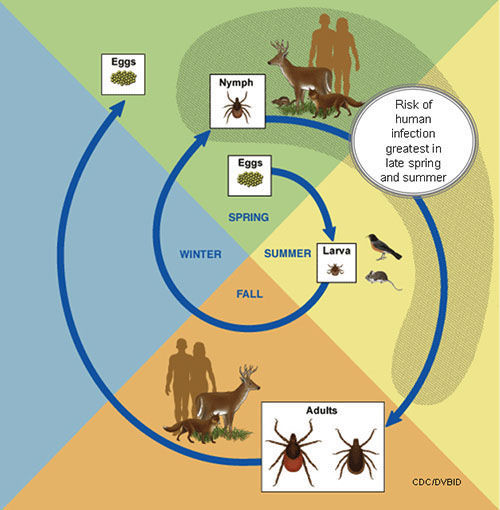 Tick-borne diseases are frequently spread in the nymph stage of the tick life cycle. 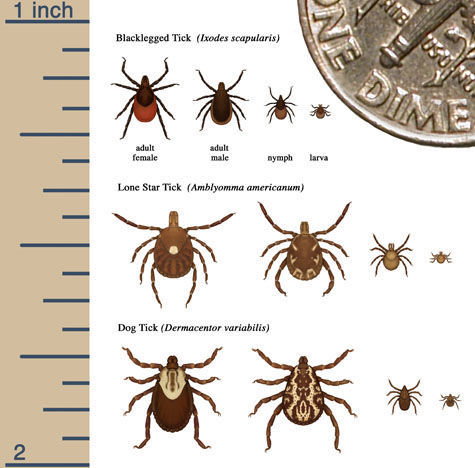 “Someone just brought me seven ticks they got off their dogs and kids in one day,” said Ahern, an associate professor of microbiology at SUNY Adirondack, explaining the family had been on a nature trail near Warrensburg. “I send the ticks off to Northern Arizona University for DNA testing to see what pathogens are in the ticks.”

And even though it might seem a bit early, Ahern warns that the ticks are already here for the season. “This is a giant public health issue,” she said.

Researchers at the Cary Institute of Ecosystem Studies in Millbrook predict that this will be a particularly bad year for ticks because there were so many white-footed mice last summer. A single mouse can be covered with 50, 60, even 70 ticks because, unlike other animals such as squirrels, mice are not very good at grooming the ticks off their bodies.

“It was the highest mouse population we have seen since we began monitoring in the early 1990s,” said Dr. Richard Ostfeld, senior scientist at the institute. “The white-footed mice are hosts for baby ticks.”

And more mice mean more infected ticks, and that means more disease because the mice, many already infected with tick-borne pathogens, infect nearly 95 percent of the baby ticks that first feed on them.

“We need to warn people to start being vigilant,” Ostfeld said.

Centers for Disease Control scientists also point to a dramatic increase in tick-borne diseases. Over the past 20 years, the reported cases of Lyme disease alone have more than tripled to more than 30,000 cases reported each year. Yet, CDC officials admit that number does not show the true picture. They estimate the number is more likely 10 times that figure, or more than 300,000 cases a year.

To compound the problem, Lyme disease is not the only worry. The New York State Department of Health and the CDC report that other tick-borne diseases come from area ticks, including anaplasmosis, babesiosis, ehrlichiosis, Rocky Mountain spotted fever and Powassan virus.

“What we see in the emergency department runs the gamut from an embedded tick or a fear (by a patient) that part of the tick is still embedded, to the worst complications,” said Dr. Benjamin Katz, an emergency physician at Glens Falls Hospital. “Babesiosis is incredibly rare and I have not seen it, but I have some colleagues who have seen it … we see Lyme and anaplasmosis quite frequently.”

Ticks, who only feed three times in their two-year life cycle, have three different biting stages: Larvae or baby, nymph or teen, and adult. And after their final gorging blood meal, the adults mate. The male often dies and the female lays anywhere from 2,000 to 18,000 eggs that will hatch and start the life cycle again.

So last summer, when the larvae hatched from eggs, they more than likely enjoyed their first blood meal from a white-footed mouse. Still, the baby ticks or larvae are not the problem.

“The larvae are harmless, but they can acquire the infection. Who they bite determines if they are dangerous,” Ostfeld said, adding that it’s the nymph and adult ticks that transmit disease to humans and other animals while feeding on the host’s blood for three or four days. “About one-third of the nymphs in our area are infected.”

To feed, the tick breaks the host’s skin and inserts what looks like a barbed feeding tube to suck the blood. The tick’s saliva is equipped with painkillers, anticoagulants (much like vampire bats), a sort of cement and immune suppressants. Because of this, the tick can quietly eat undetected, unless you go looking for them to stop the process.

But even after they quietly settle into the skin and begin feeding, Ostfeld said that it takes a day or so for the tick to transmit disease into the body through their saliva. That’s why it is so important to intervene early.

“They are not going to let go until they are finished feeding. People shouldn’t pay attention to things like applying Vaseline or touching a hot match to the tick to get it to release,” he said. “Get fine-tip tweezers close to the skin and pull it out. Don’t waste time.”

According to scientists, if squeezed during removal, the tick may regurgitate infected blood back into the wound.

In addition to Lyme, the black-legged tick also transmits the anaplasmosis, babesiosis and Powassan viruses. With anaplasmosis, the white blood cells are affected, and babesiosis is similar to malaria. Both often start with a high fever and chills.

According to the CDC, the Powassan virus is fatal in 25 percent of cases. In the past 10 years, about 75 cases have been reported in the United States, with 16 of those in New York. Signs and symptoms of infection can include fever, headache, vomiting, weakness, confusion, seizures and memory loss.

The lone star tick is an aggressive tick that transmits ehrlichia, tularemia and STARI. And the American dog tick transmits Rocky Mountain spotted fever and tularemia.

Not a formulaic treatment

“It’s not like Strep throat where you can start an antibiotic and get better,” she said. “When tick-borne bacteria are involved, a one-size fits all doesn’t fit all.”

Ahern said in many areas, including Glens Falls, doctors give patients a single dose of the antibiotic doxycycline if they have been bitten by a tick as a precaution. This practice evolved from a 2001 relatively small-scale study. But doing so just pushes the bacteria into hiding, Ahern said, adding that the treatment is based on bad science.

“These bacteria have the ability to shut down and avoid destruction by the antibiotic. They stay quiet until the antibiotic is gone,” she said. “With a single dose we are inducing it to go into a dormant mode.”

Nonetheless, a recent article in the Journal of Emergency Medicine recommended the single dose as a prophylactic for people bitten by a black-legged tick in areas where Lyme incidence is high. This recommendation is based upon the 16-year-old study.

The International Lyme and Associated Diseases Society’s treatment guidelines report that the evidence supporting the single-dose therapy was “sparse, coming from a single study with few events, and, thus, imprecise.”

The other treatment conflict ties to the length of time an antibiotic is administered and the recognition that for some people, tick-borne diseases manifest differently.

Katz of Glens Falls Hospital said there can be complications of tick-borne diseases, including neurological and cardiac-related problems. “You can even get a sort of meningitis,” he said. “With the heart, you can get Lyme carditis, arrhythmias, even a complete heart block that requires a pacemaker.”

Katz said he subscribes to what he calls “mainstream treatment protocols” established by the CDC and the Infectious Disease Society. “The standard therapy is 10 to 14 days of oral antibiotic. If there are neurologic or cardiac complications, six weeks of IV antibiotic,” he said.

But Ahern said nearly 50 percent of people do not completely recover. Treatment needs to be more individualized and more research is needed, she said.

“At Johns Hopkins, they are looking at cancer drugs and other combinations to be more effective,” she said. “We need a more comprehensive approach.”

How to protect yourself

Ticks live in moist and humid environments, particularly in or near wooded or grassy areas. You may come into contact with ticks during outdoor activities around your home or when walking through leaf litter or near shrubs. Always walk in the center of trails in order to avoid contact with ticks.

Use a repellent with DEET on skin. Repellents containing 20 percent or more DEET (N, N-diethyl-m-toluamide) can protect for several hours. Always follow product instructions. Parents should apply this product to their children, avoiding the hands, eyes and mouth.

Check your clothing for ticks. Tumble dry clothes in a dryer on high heat for 10 minutes to kill ticks on dry clothing after you come indoors. If the clothes are damp, additional time may be needed. If the clothes require washing first, hot water is recommended. Cold and medium temperature water will not kill ticks effectively.

Shower soon after being outdoors. Showering within two hours of coming indoors has been shown to reduce your risk of getting Lyme disease. Showering may help wash off unattached ticks and it is a good opportunity to do a tick check.

Looking back at local history: April 30

Take a look back at local history. Here are the top stories for April 30 from one, five and 10 years ago.

The accompanying maps of the continental United States shows the progression of Lyme disease cases from 2001 to 2014.

Dr. Richard S. Ostfeld, senior scientist at the Cary Institute of Ecosystem Studies in Millbrook, studies populations of white-footed mice and the black-legged ticks that feed on the mice. Researchers at the institute predict this will be a particularly bad year for ticks.

These maps created in 2015 show an increase in the number of Lyme disease cases over time.

This confetti-like image is Borrelia burgdorferi, the bacteria that causes Lyme disease.

Associated with woodland areas, the black-legged tick can carry multiple pathogens and is responsible for the spread of Lyme disease, babesiosis, anaplasmosis and Powassin virus.

The Lone Star tick is a woodland tick and is known to transmit ehrlichiosis.

The American dog tick is found in grasslands and is known to transmit Rocky Mountain Spotted Fever.

Tick-borne diseases are frequently spread in the nymph stage of the tick life cycle.