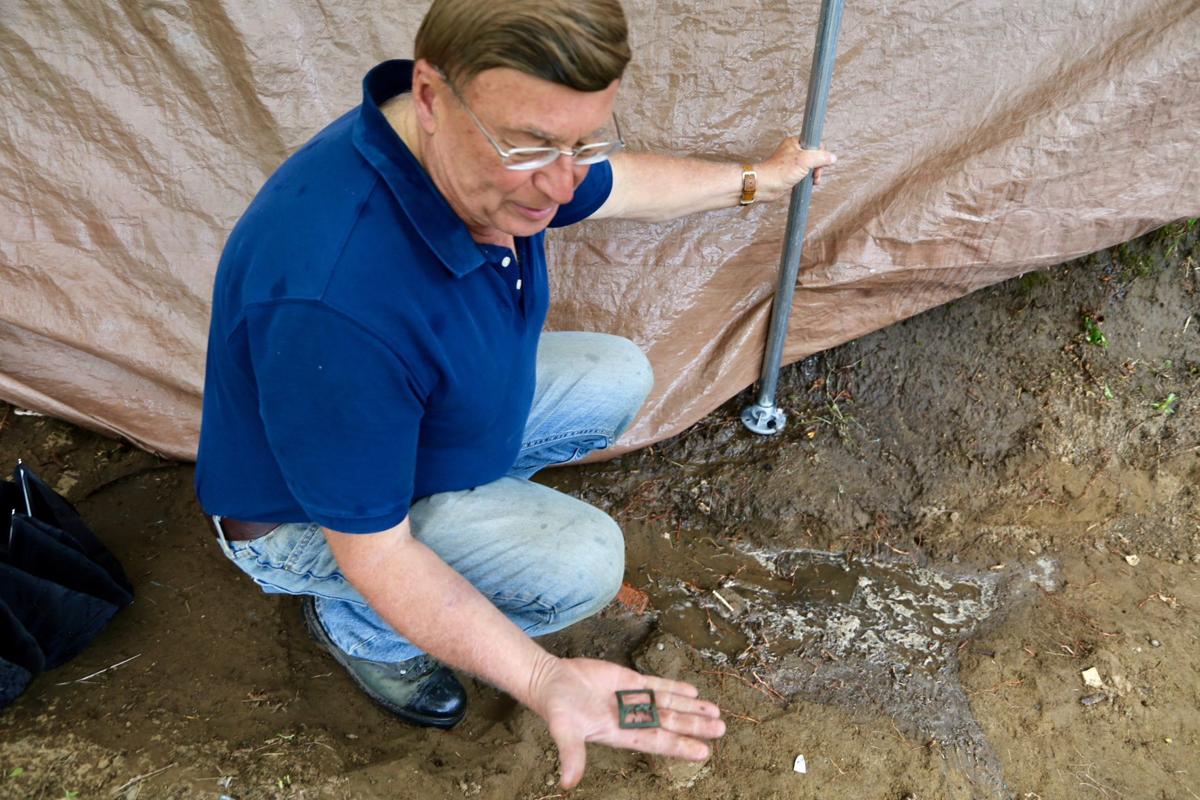 Archaeologist David Starbuck holds a buckle found at an 18th-century officer's house, on July 31 on Rogers Island in Fort Edward. 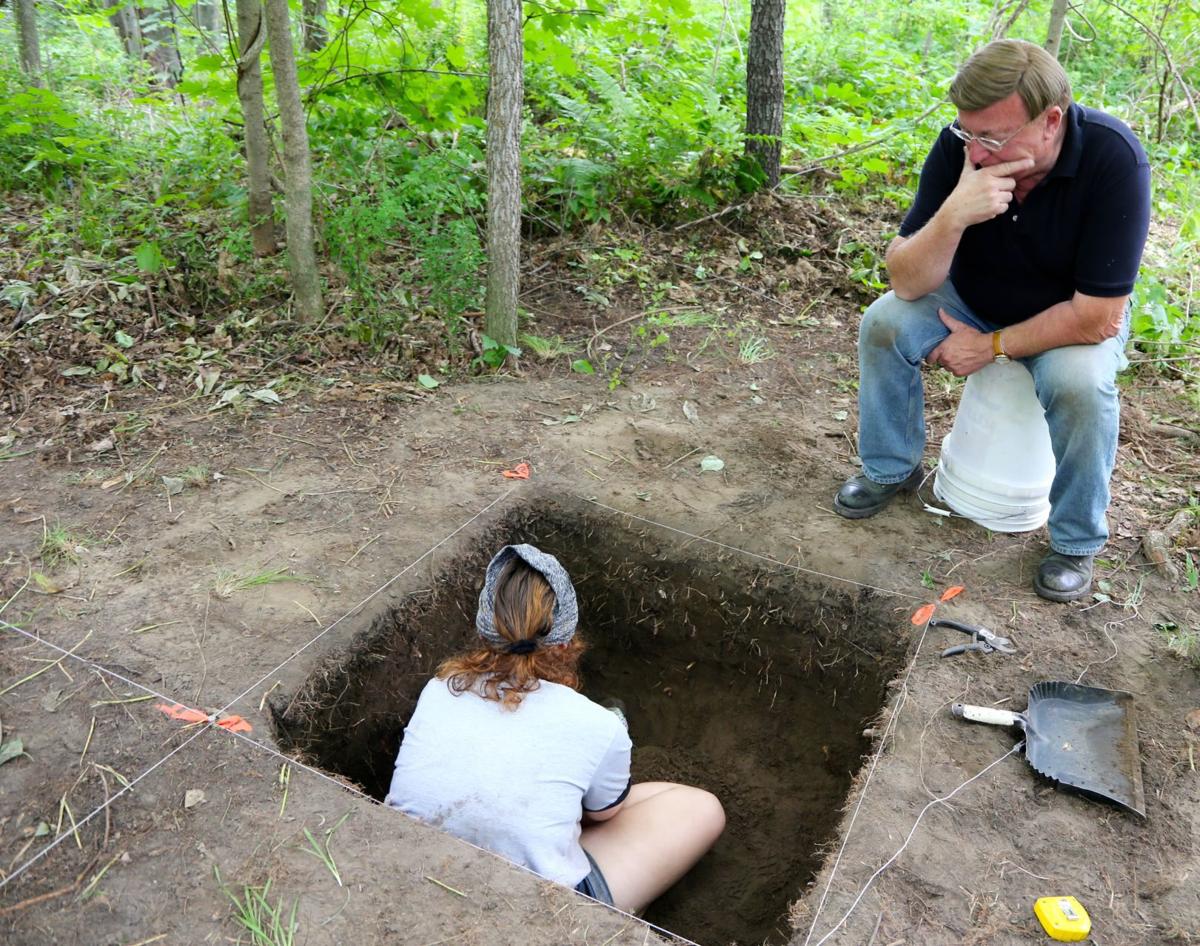 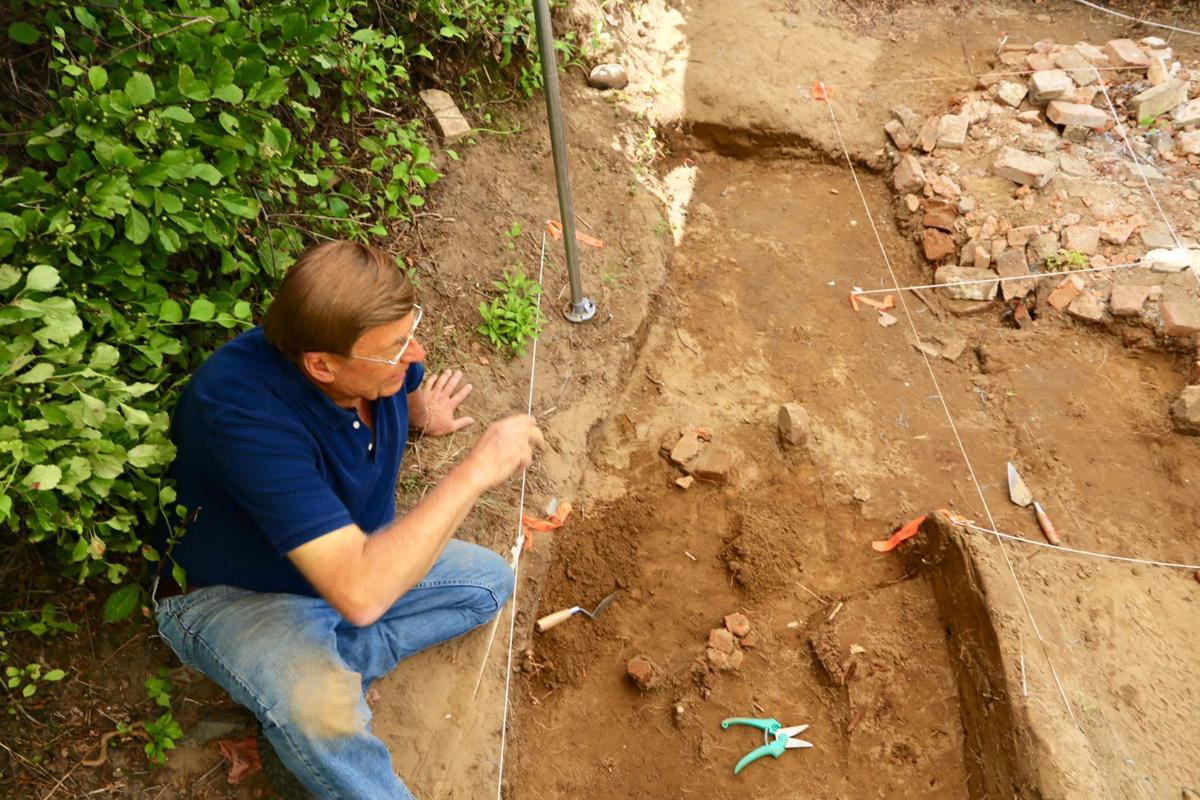 That’s because the archaeologist and professor was diagnosed with stage 4 pancreatic cancer this summer.

For those who have never met Starbuck, they may not have noticed he had lost weight or appeared more fatigued than usual. Starbuck had attributed his lethargy to the heat, so the diagnosis came as a shock.

Starbuck is being treated at the Charles R. Wood Cancer Center at Glens Falls Hospital, with assistance from Memorial Sloan Kettering Cancer Center in New York City. He said he is delighted by the care he gets at Glens Falls, and while some days are tougher than others, he continues to dig with the help of a couple of trusted colleagues, including historian Matthew Rozell.

"We all want to find something. You don't find something great every day, far from it. But Rogers Island has so many stories attached to it, it's one of those places we can always go back and hope for the best."

Rogers Island, the famous French and Indian War site, is under the purview of the state Parks, Recreation and Historic Preservation Department. The state has given Starbuck permission to continue digging at the site of an officer’s hut, and to dig some test pits to see what other artifacts may be unearthed.

“I will dig until the day I die,” Starbuck said. “Traditionally, archaeologists exist to discover things. This is what we live for.”

And Starbuck has discovered so many things on Rogers Island and in Fort Edward, from a smallpox hospital, the first ever unearthed, to an 18th-century merchant’s shop.

He has taught 69 college archaeological field schools in his lifetime, “probably twice that of anybody else in the country,” he said. In the summer he has taught at SUNY Adirondack, and during the school year at Plymouth State University in New Hampshire.

He has become a champion of the town of Fort Edward, hoping to see the Rogers Island Visitors Center flourish, the island become a tourist destination similar to Fort Ticonderoga and the stories of the hospitals, soldiers and first U.S. Army Rangers told for generations to come.

“They can’t just hope that somehow good things will happen,” Starbuck said about town and village officials. “Good things are happening — a couple of thousand enthusiastic visitors each year, all sort of waiting for things to go to a higher level, but the money has not been there. It’s hard to keep functioning at a poorly funded, low-key level. It’s not getting the visibility that it deserves.”

It’s a frustrating spot to be for Starbuck, who has been digging on the island since it was in private hands in the early 1990s. He even lived on the island for a couple of years, when a private landowner had built a home there.

Digging was not approved on the island last year, but this year, he was back.

With a potential for a few more weeks of seeing what else could be uncovered at the site of the officer’s hut, Starbuck is eager to keep working, even while undergoing cancer treatments.

“I love saying to people, archaeologists just plan and dream all winter of the great discoveries we’re going to make next summer,” he said. “We all want to find something. You don’t find something great every day, far from it. But Rogers Island has so many stories attached to it, it’s one of those places we can always go back and hope for the best.”

NOTEBOOK: Fort Ann road is back open, Fort Edward to get an historical marker

Hogtown Road over Mount Hope Brook in Fort Ann is finally back open, after months of work on a new culvert and bridge.

Fort Edward and Lake George make a splash across the pages of Archaeology magazine this September and October issue, for their rich history in…

'We are finally back': Archaeology program makes 18th century finds on Rogers Island

FORT EDWARD — The dig is back on Rogers Island, and archaeologist David Starbuck and his students have already discovered some special finds.

FORT EDWARD — The SUNY Adirondack archaeological field school will return to work on Rogers Island this summer, after its year reprieve workin…

Fort Edward dig wraps up for the season

FORT EDWARD — Despite the heat, bugs and poison ivy, participants in the latest SUNY Adirondack archaeological field school uncovered some his…

What did merchants sell to French and Indian War soldiers?

FORT EDWARD — It had been a while since Peter Martin was a Boy Scout, camping on Rogers Island and searching for buried treasure — four or fiv…

Rogers Island re-enactment to go from annual to biennial

A reenactment on Rogers Island is switching from annual to biennial to avoid event conflicts.

Never-before finds wrap up an exciting dig at Rogers Island

The people occupying an officers house on Rogers Island more than two centuries ago could read and write, new discoveries during the archaeological dig there show.

Historical protections of sites and human remains vary across the state, country and globe

Historical sites holding Revolutionary-era artifacts and human remains lie below the ground all throughout the local area, but if they are on private property, they have little to no protection under the law.

Archaeologist David Starbuck holds a buckle found at an 18th-century officer's house, on July 31 on Rogers Island in Fort Edward.