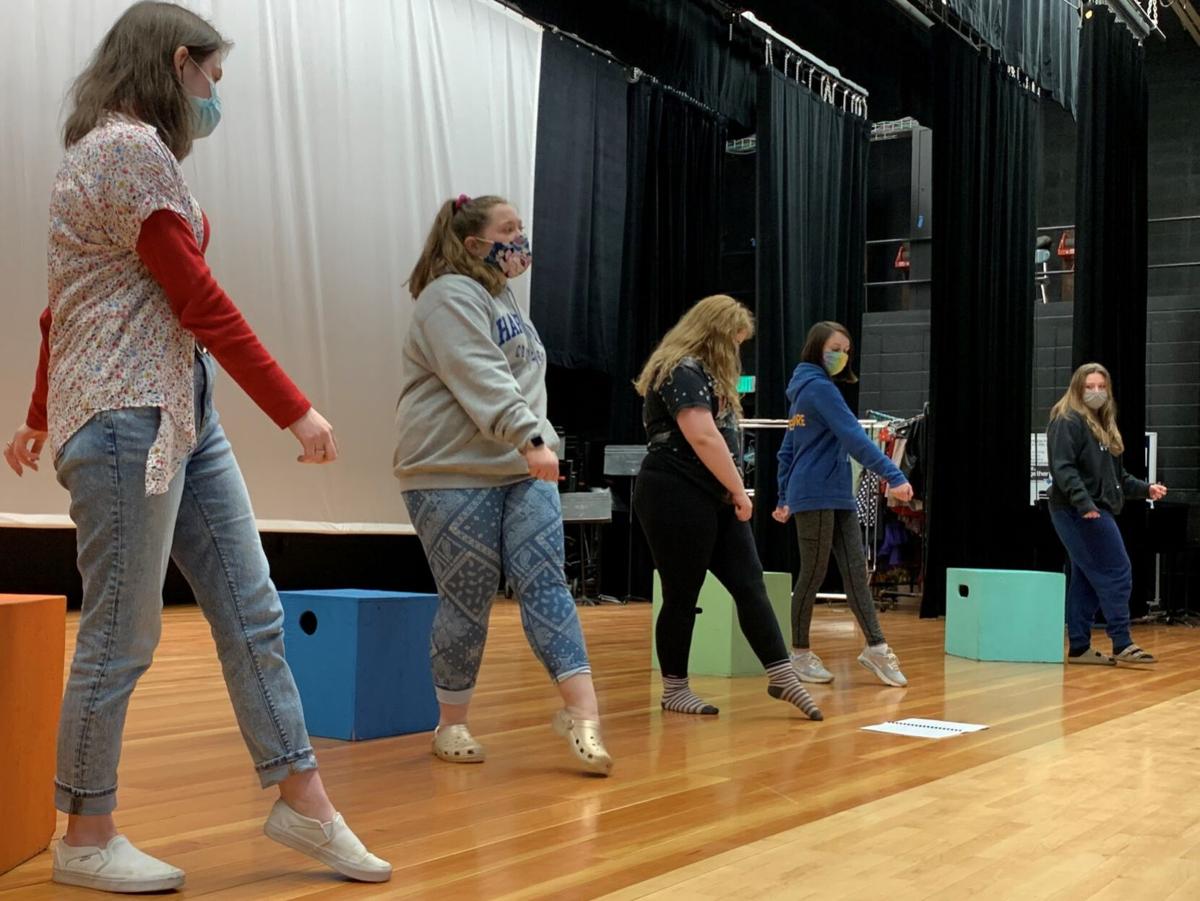 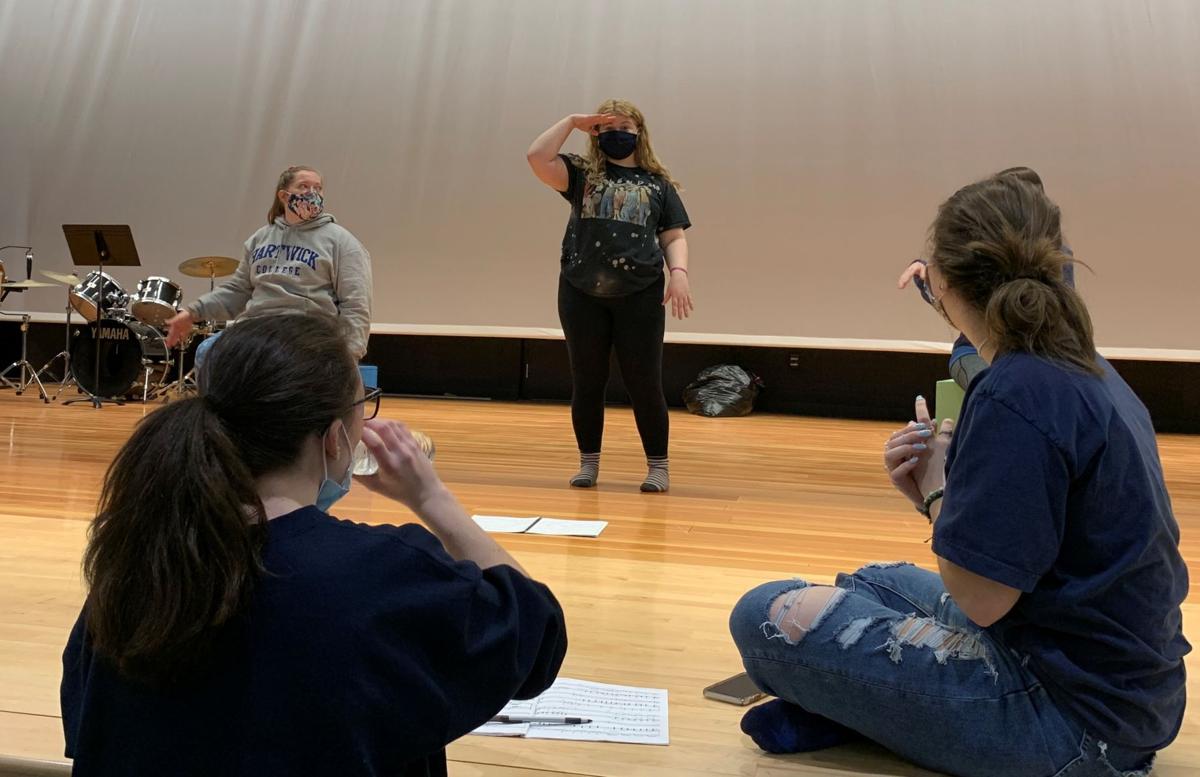 Queensbury student Madison Gaiser, center, choreographs a dance to the song "Holding Out for a Hero" in preparation for the Queensbury High School musical, which will be aired on the school's YouTube channel in May. 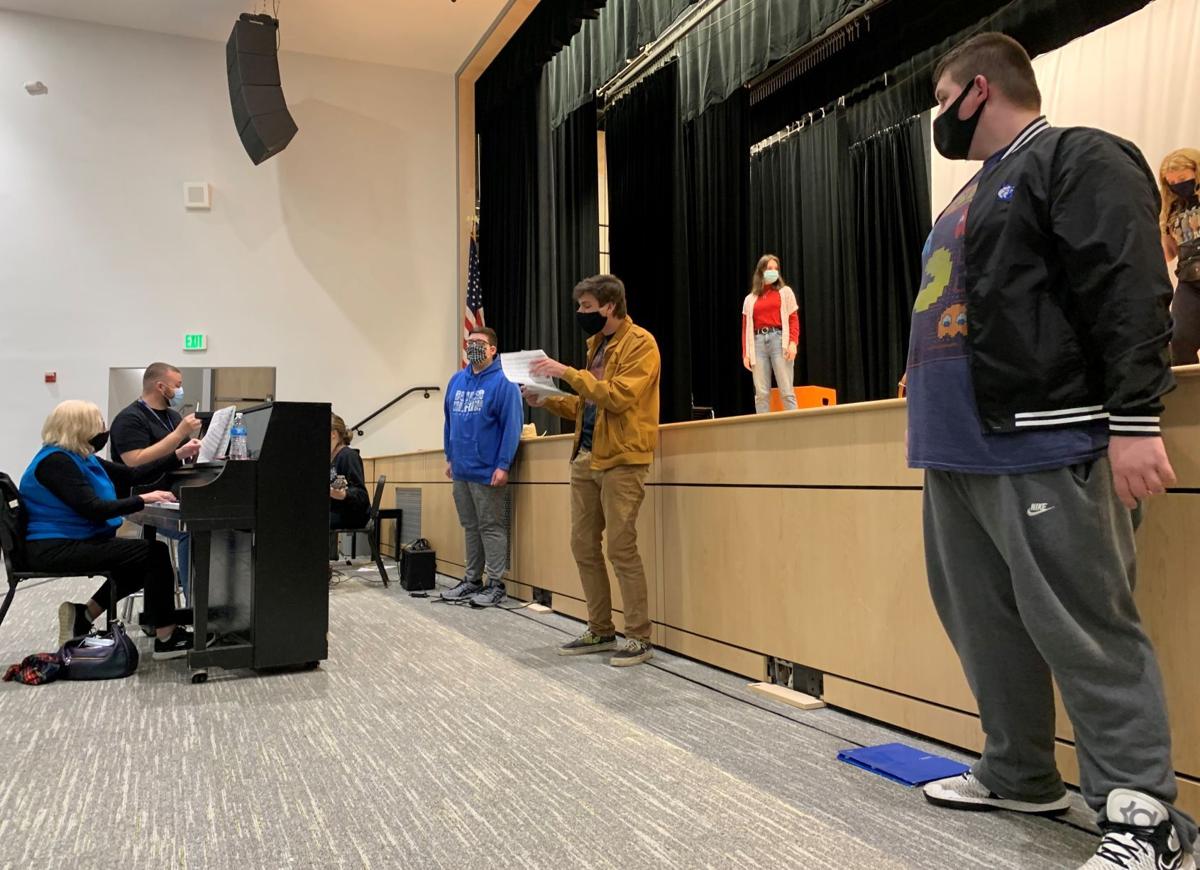 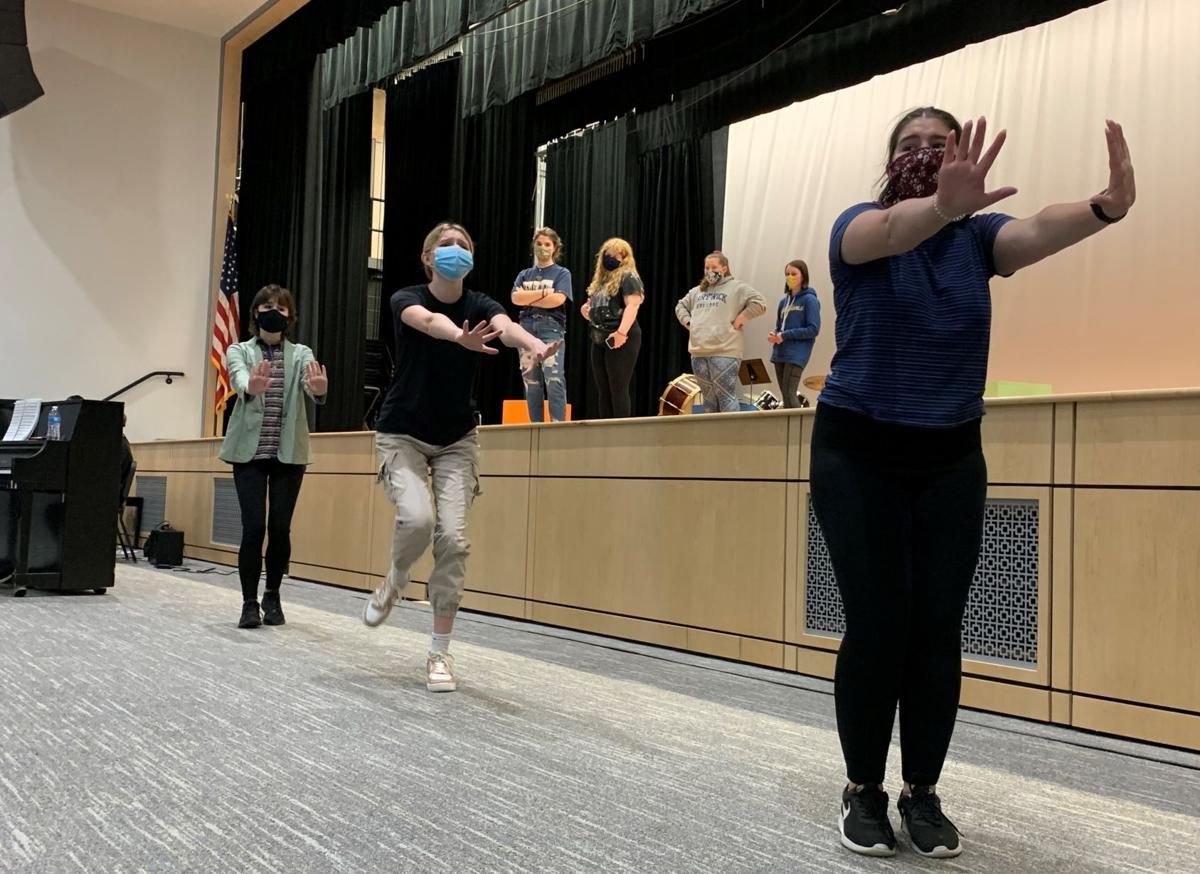 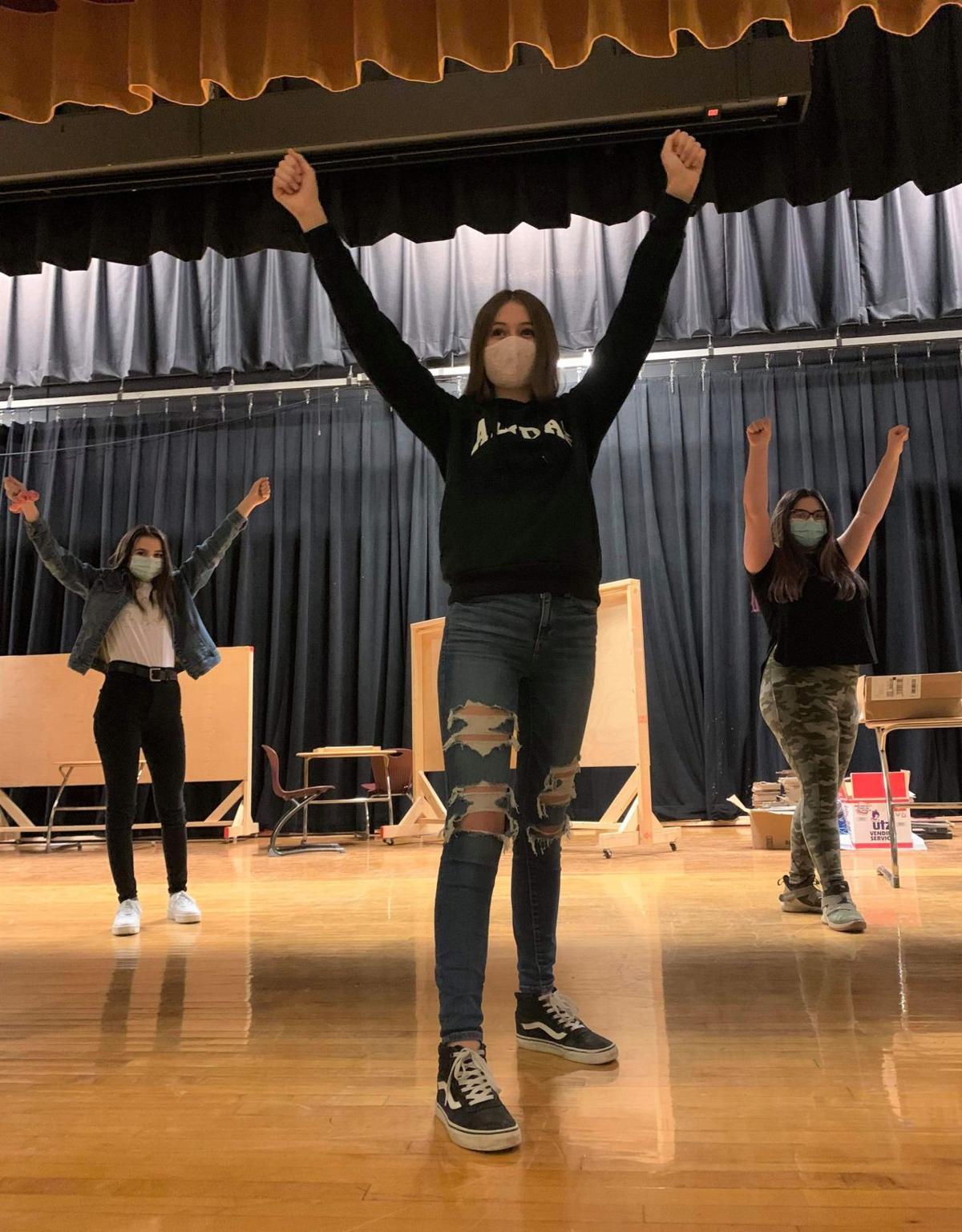 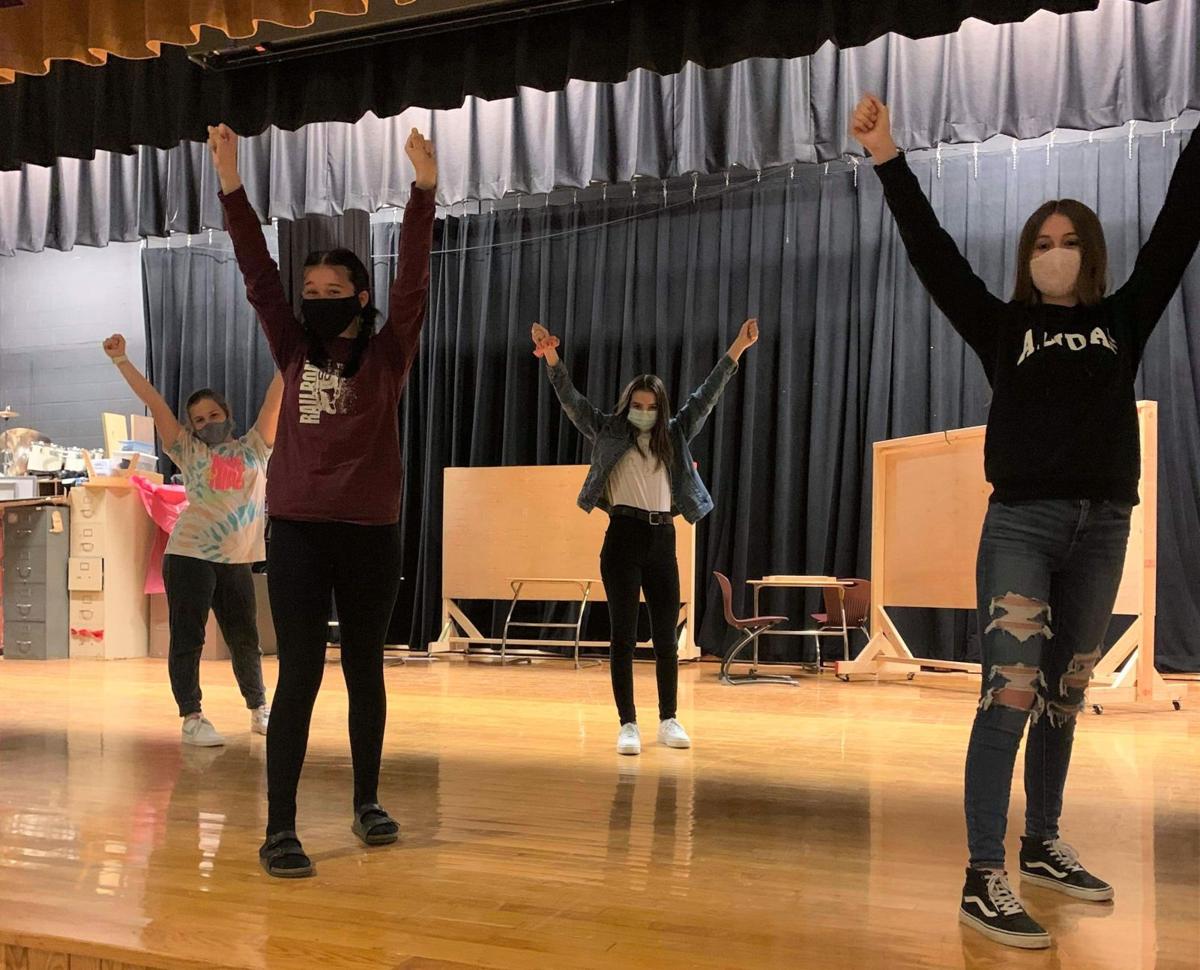 GRETTA HOCHSPRUNG Special to The Post-Star

It was opening night.

It was a Thursday.

During the school day, members of the Drama Club were called down to the auditorium to hear some very bad news.

“We were told it was postponed, and that was at first, so we still had some hope,” Murray said.

Within the next few days, the state shut down all schools. And eventually the Drama Club knew the show would not go on.

“It felt suffocating, almost,” Murray said. “We put so much creative work and hard work and soul into the show.”

As the coronavirus pandemic lingered into the new school year in September, the Drama Club had little hope of taking to the stage this year. Planning usually starts 11 months before a show takes place in March.

And the Drama Club was broke.

It costs around $5,000 just to buy the rights to a show, Terry said. Some of Queensbury’s productions have cost tens of thousands of dollars.

Many school musicals in the region were not able to perform last year when schools shut down, and some still couldn’t find the money or time to produce a musical this spring.

Whitehall High School held its production of “Sister Act” on March 6 of last year, just a week before schools shut down.

“We were very lucky in that we were one of the few schools that got to perform last year,” said Whitehall Drama Club co-adviser Melissa Clark.

She was to perform in the pit of Fort Ann’s production of “Oliver” the following weekend, but it, too, was shut down on opening night.

Whitehall sophomore Louie Pratt didn’t think Whitehall was going to be able to put on a show this spring either. The high school and its auditorium sustained flood damage from a storm that flooded the school campus on Aug. 24. The high school students just returned to campus last month.

Over the April break, the maintenance staff worked hard to make the stage usable, Clark said.

“I was over the moon,” Pratt said. “I did not think there was going to be a play at all.”

The Whitehall Drama Club will perform “High School Musical Jr.” on June 4 and 5.

The club hopes to have a live, physically distanced audience. The student performers will be masked and stand 6 feet apart, now that the state changed the singing regulations from 12 feet to 6 feet.

If an audience isn’t possible, the performance will be recorded and members of the cast will be given a copy.

Lake George High School is performing “Little Shop of Horrors” this spring. The show will not be performed in front of an audience, but rather it will be recorded and released the weekend of May 21 and 22.

“We weren’t sure if a show would happen,” said Amy Baker, band director, “but when athletics were approved to resume we started making plans to put a show together.”

“Just like athletics, musical performance is an important piece of many students’ high school experience,” Baker said in an email. “The students are very excited to be able to participate in a production this year. Seniors especially are amazed and appreciative that they can round out their last year with a show.”

Schools have certainly had to get creative. Queensbury is putting on more of a variety show, recording it in advance and airing it on the school’s YouTube channel instead of in front of an audience.

“We’re celebrating the history or tradition of the musical here at Queensbury,” Terry said. “And we tried to hit every single musical as possible since 1979. So we’ve tried to cover at least the last 42 years.”

A skeleton crew — made up of Terry and Music Director Matt Gaulin — is putting together the show minus the tutelage of a stage manager, choreographer, set designer or costumer.

“Nothing like two guys going out there and looking for dresses,” Terry joked. “It’s interesting. We went from having a whole team that puts it on, to two people.”

Queensbury students have also had to squeeze in a year’s worth of work into eight weeks.

But that’s OK with Murray, who gets to reprise her role of Sally when she sings “My New Philosophy” — the song she didn’t get to perform last year.

“I was expecting to not have a senior show this year at all. But then we heard about this and I jumped right on board,” she said with a clap of her hands.

She will also perform in a trio singing “Little Shop of Horrors,” as well as some larger group numbers.

“Being back on stage, it makes me realize why I love theater in the first place, and that’s why I’m pursuing it for college,” she said. “It just feels really almost like spiritual in a way, because it’s been so long.”

The pad was shut down hours after opening last Saturday, when a nearby picnic area began to flood due to a suspected drywell failure.

Queensbury student Madison Gaiser, center, choreographs a dance to the song "Holding Out for a Hero" in preparation for the Queensbury High School musical, which will be aired on the school's YouTube channel in May.