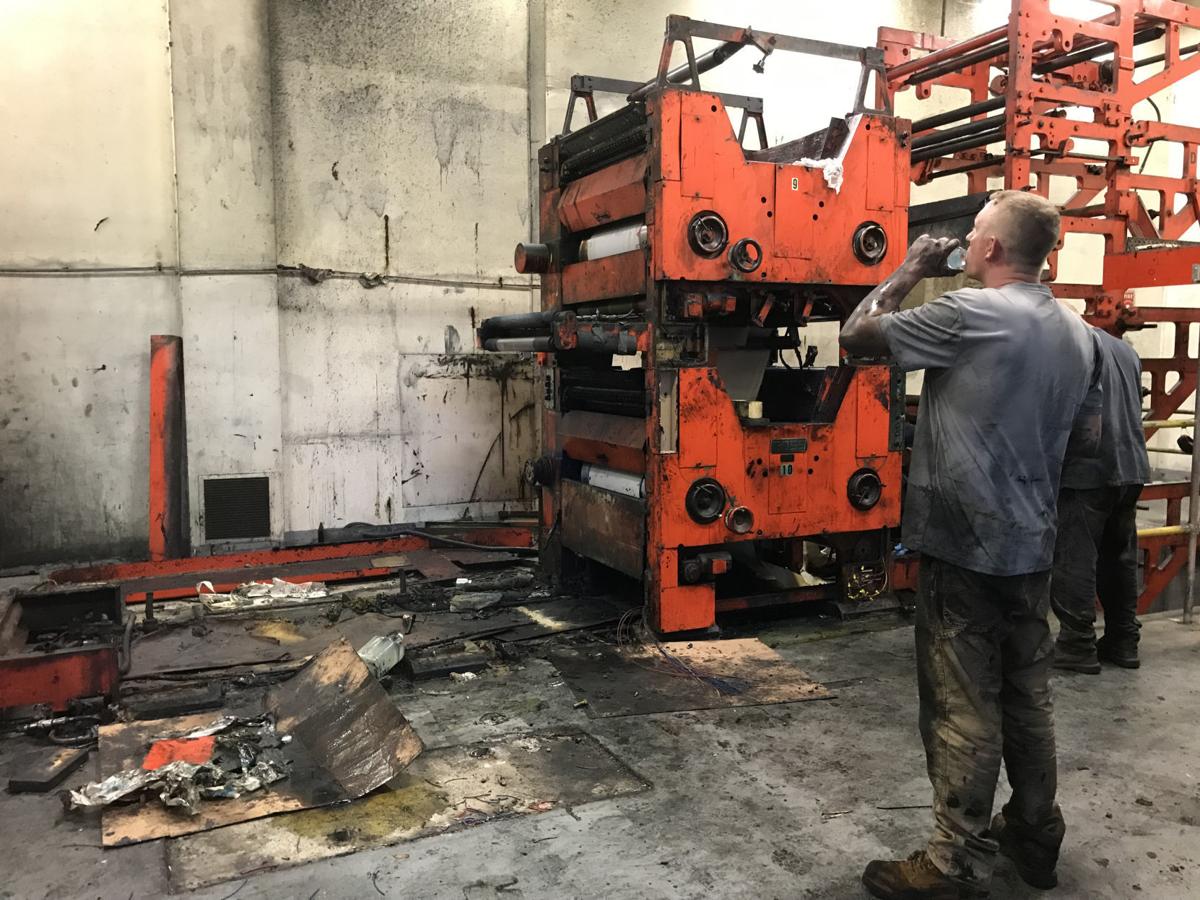 Rem Hann, covered in ink, takes a drink of water as the team takes apart the press over the course of the past week at The Post-Star's offices in Glens Falls. 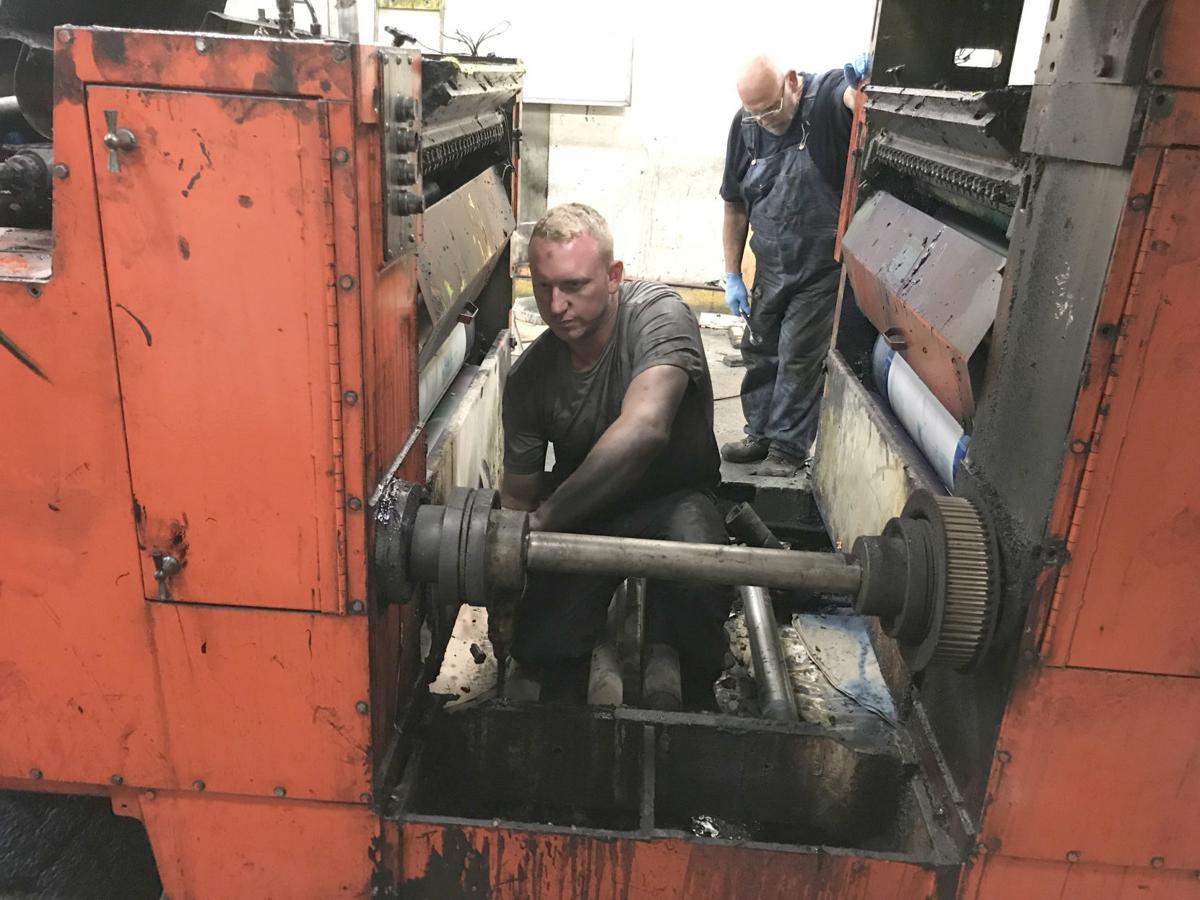 Rem Hann saws through a cylinder connecting two pieces of the press at The Post-Star as it dismantled. 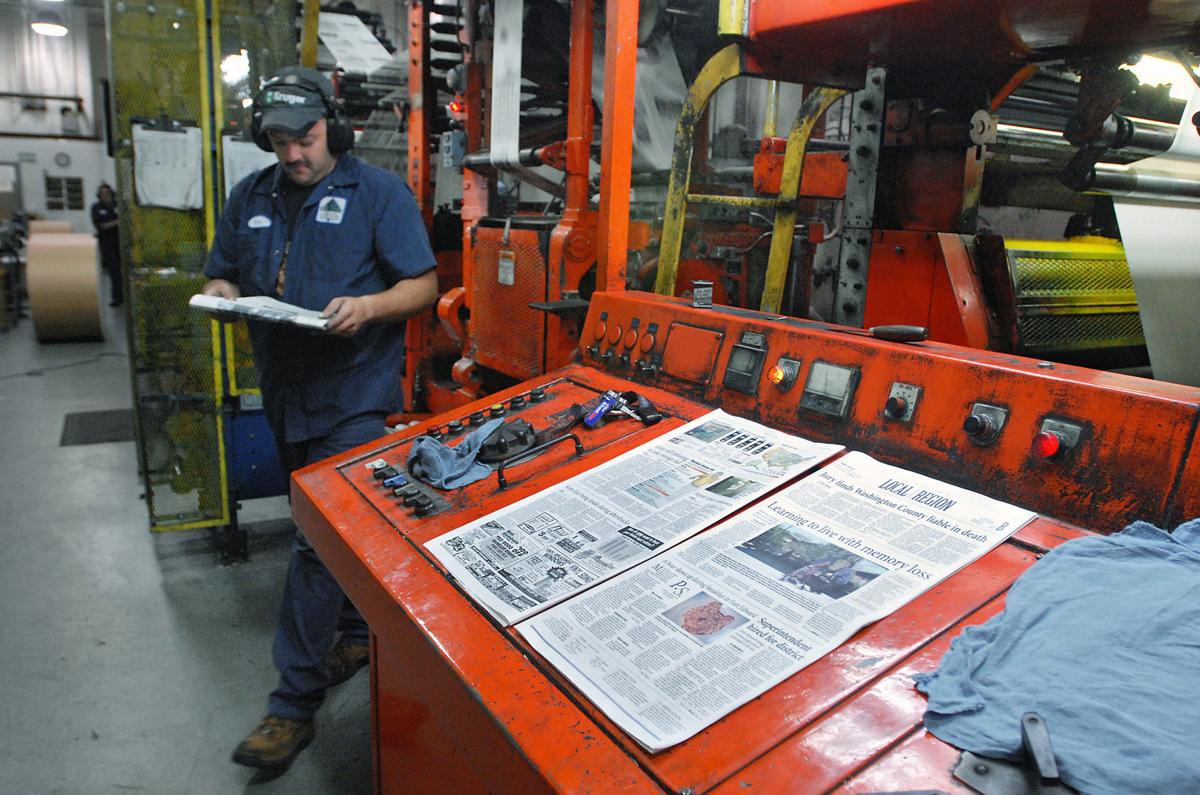 The local section of the May 15, 2008, edition of The Post-Star comes off the printing press shortly after 1 a.m. 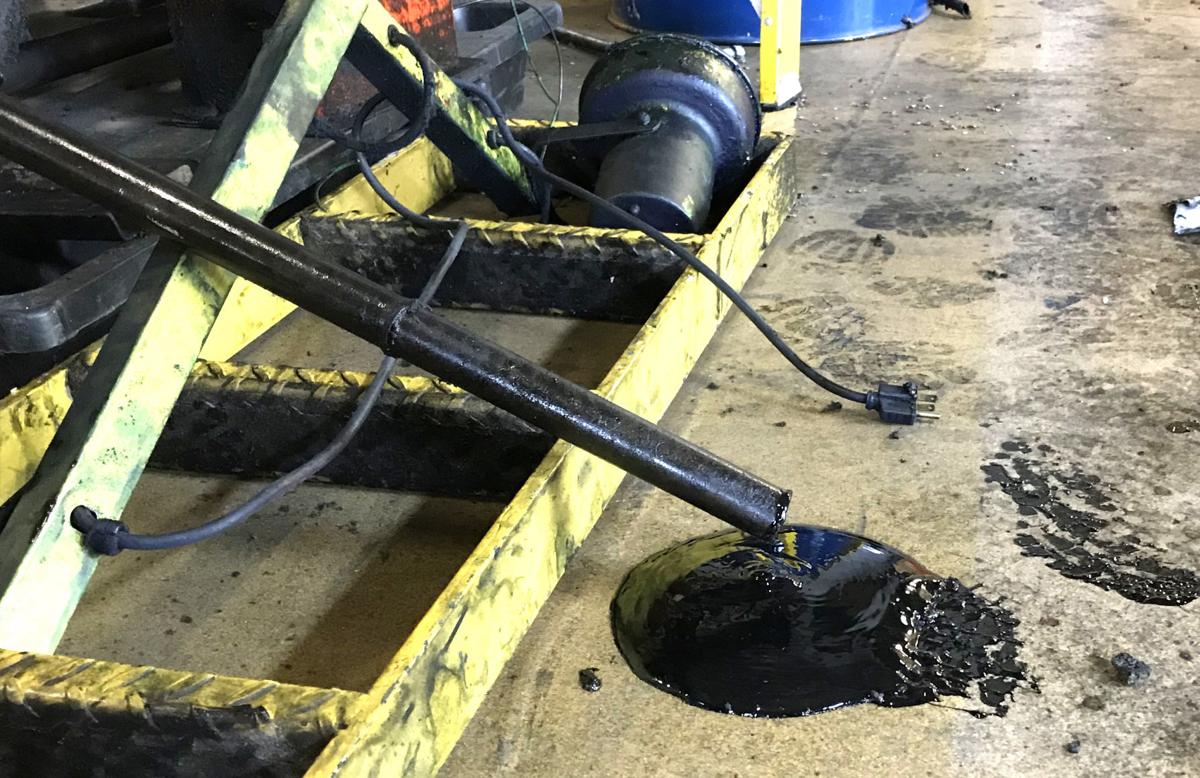 The removal crew for The Post-Star press pumped out buckets of ink in recent days, and there was still plenty left to spill on the floor.

GLENS FALLS — It’s the end of an era.

The Glens Falls newspaper has been printed in Glens Falls from when newspapers started printing in the early 1800s until 2017.

This week, a three-man team tore apart The Post-Star’s press with drills and saws, sending it to the Port of Albany to be recycled as scrap metal. About 1,500 tons of metal are being recycled.

The Post-Star is now printed at the Daily Gazette’s press in Schenectady. Over the past year, The Post-Star has sold off any usable items left at its press — motors, rollers and the like. Some items were given to other newspapers in Lee Enterprises, which owns The Post-Star.

But most of the press was well beyond its useful life.

“The age of the press really started to show itself” in 2017, Interim Publisher Brian Corcoran said. “Metal fatigue became a problem. We were getting things breaking in the middle of cylinders.”

The press was nearly 60 years old and had been running every night — except for a few notable disasters in previous decades.

“We had a press fire,” Corcoran recalled. “They rebuilt parts of it. It took months.”

During that time, The Post-Star was printed in Schenectady.

As the company was negotiating in 2017 to have the newspaper always printed in Schenectady, another disaster struck. The folder, a mechanized piece that could fold 8,000 copies of the newspaper an hour as they come out of the press, broke down.

“Some metal piece sheared off in there,” Corcoran said. “We could not print.”

It might sound easy to fold the paper, but the four sections that needed to be folded had to be caught as they exited the press at high speed. It’s not a manual job.

Eventually, the problem was fixed, but Corcoran was relieved to turn the paper over to the Daily Gazette’s press.

“It got to the point where I was getting a 1 a.m. phone call every night,” he said of the press breakdowns.

The press is liberally covered with black ink, which gave the recyclers pause. When the press was removed, even more was revealed. It looks as though ink sprayed out of the press in all directions. The crew found more in the press itself, pumping out several buckets of ink.

“Yup, it’s a dirty one,” Ron Lonning said cheerfully, one day into the removal.

The crew left their inky clothes at The Post-Star every evening and scrubbed in a shower for 40 minutes to get clean each night, they said. In the morning, they returned to put on their black, stiff clothes.

Lonning has removed about 40 presses around the world and installed about 100 in the past 39 years. As he shook ink off his hands, he said, “What’s not to like?”

He’s taken some “pristine” presses out.

Their families might feel differently. Rem Hann throws away every stitch of clothing at the end of a job.

“I throw away my boots, my belt, everything. I don’t take anything home. My wife would kill me,” he said.

Once the entire press is removed, the next step is a cleaning crew. The ink may need to be power-washed off the walls and ceiling, Corcoran said.

Removing the press is the first step toward selling the building. The Post-Star is planning to move to a smaller office space now that it no longer needs room for a press.

But all sale contracts require the building to be “broom ready,” Corcoran said. So there’s a lot of cleaning to be done, but there may be plenty of time. No buyer has been announced for the building.

“No sale is imminent,” he said.

Here's my personal top five stories of the year - stories I covered that were fascinating, horrible, or eye-opening.

BLOG: It was once the lifeblood of the newspaper

I found myself wandering into the pressroom this week. I had not been back there in a while.

Blog: This building is where my career started

In case you haven’t heard, The Post-Star will be relocating sometime in the not-too-distant future, as we have put our building at the corner …

Post-Star puts buildings up for sale

The slow road to a press-free building continued this week with the removal of The Post-Star‘s ink tank.

Post-Star building up for sale again

The Post-Star is putting its nearly 5-acre lot on the corner of Lawrence and Cooper streets back on the market.

Rem Hann, covered in ink, takes a drink of water as the team takes apart the press over the course of the past week at The Post-Star's offices in Glens Falls.

Rem Hann saws through a cylinder connecting two pieces of the press at The Post-Star as it dismantled.

The local section of the May 15, 2008, edition of The Post-Star comes off the printing press shortly after 1 a.m.

The removal crew for The Post-Star press pumped out buckets of ink in recent days, and there was still plenty left to spill on the floor.