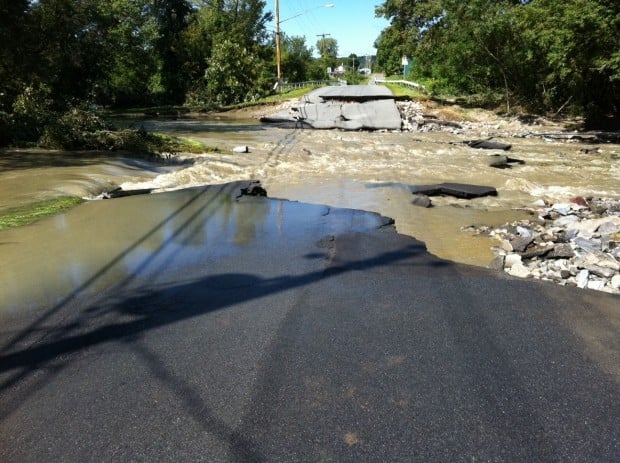 Cove Road in Middle Granville, as it appears Monday morning. The road was washed out by flooding from Tropical Storm Irene. 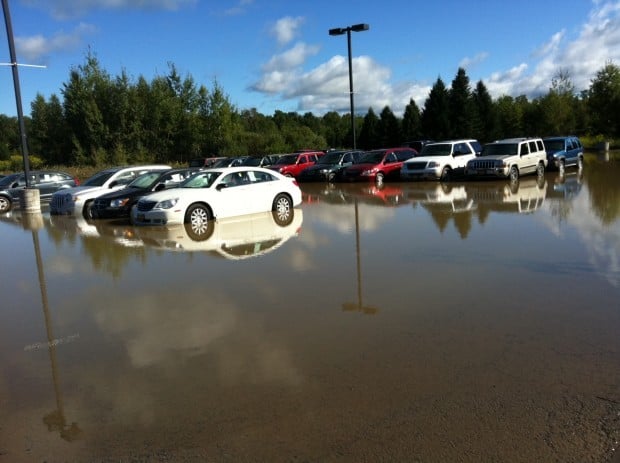 Zappone Chrysler Dodge in Granville sustained significant damage due to flooding Sunday and Monday. Between 130 and 140 vehicles were damaged. 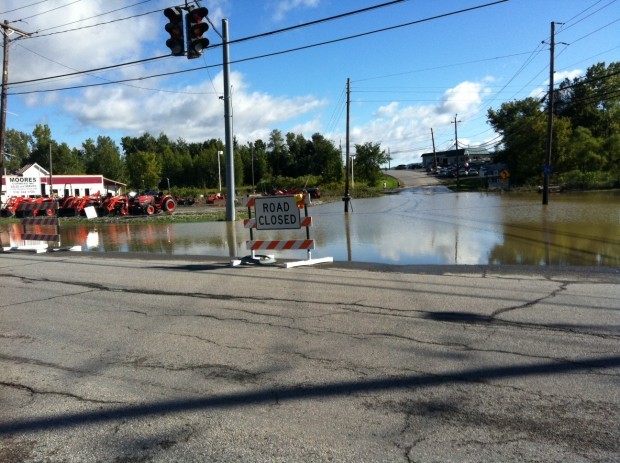 Flood waters forced the closure of the Route 22-149 intersection in Granville earlier Monday. The intersection has since been reopened. 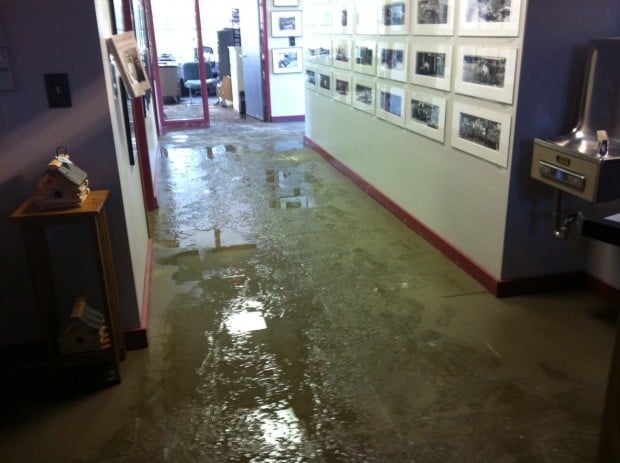 The Slate Valley Museum in Granville is closed until further notice due to flooding. 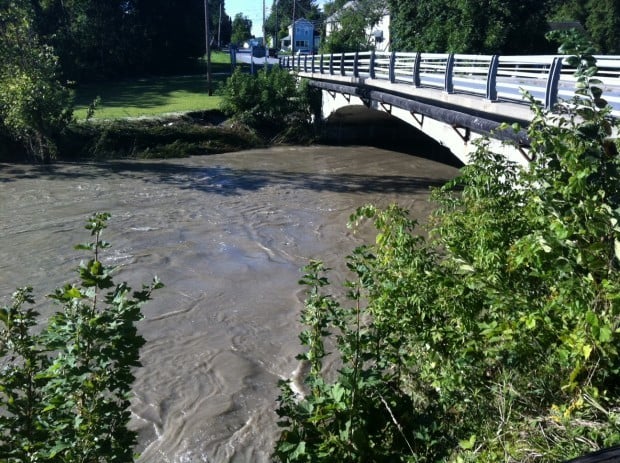 A major bridge in southern Washington County was closed Monday afternoon out of concerns about the safety of a dam on the Batten Kill.

The Route 29 bridge in Middle Falls has been closed for at least 24 hours. Route 29 is also closed between Salem and Greenwich because the Batten Kill has flooded the road near county Route 61.

The concern is that a dam in the village of Greenwich known as Mill Hollow appears to have a crack in a retaining wall.

Seven families living on Mill Street in Greenwich have been evacuated, and residents downstream were asked to be prepared to leave at a moment's notice.

"There's a crack on the dam on Mill Street and we're waiting for an engineer to come look at us and tell us whether we have a problem," Cambridge-Greenwich Police Chief George Bell said.

Meanwhile, flood warnings for three rivers in Washington County have been extended, with major flooding occurring on the Mettawee and Hoosic rivers early Monday.

Dozens of homes in Granville have been evacuated as the Mettawee swelled to more than 7 feet above flood stage overnight Sunday.

Four bridges in Granville were closed late Sunday, but all had been reopened as of 4 p.m. Monday. Granville Mayor Brian LaRose said all were inspected, and no structural damage was found.

They were shut down because there were concerns that a wall of debris that had accumulated upstream could break free and destroy a pedestrian bridge that could in turn affect bigger bridges, he said.

Zappone Chrysler Dodge in Granville lost 130 to 140 vehicles as flood waters rose to the windshields during the height of the storm.

The McDonald's restaurant on Route 22 was inundated with three feet of water, resulting in the restaurant being closed indefinitely.The Subway sandwich shop next door was closed, and Chapman's store in Middle Granviille was closed as well.

The Slate Valley Museum also is closed due to significant flooding.

The intersection of routes 22 and 149, which was closed earlier today (Monday) due to flooding of the Indian River, has been reopened.

A section of Cove Road in Middle Granville was washed out by flooding. Several homes there were flooded.

Flood waters began to recede early Monday, according to the National Weather Service.

The Hoosic River swelled to 8 feet above flood stage overnight Sunday, and was expected to crest today (Monday) before dropping Tuesday.

Minor flooding was also predicted on the Batten Kill in Greenwich, where Washington County emergency dispatchers reported that firefighters were monitoring a dam in Greenwich because of concerns water was bypassing it.

A number of roads in Salem were reportedly damaged by flood waters as well.

Emergency services officials reported 16 roads closed in Warren County because of flooding or washouts, most of them in Lake George, Bolton, Horicon and Johnsburg. The Warren County sheriff's office's website, sheriff.co.warren.ny.us, has a full list.

National Grid and New York State Electric & Gas continued to deal with tens of thousands of power outages early Monday. National Grid's number in the region dropped to about 50,000, most of them in Saratoga and Warren counties, as of late Monday afternoon.

No restoration times were listed on the company's website.

“All we’re telling people is to prepare for many days (without power),” he said late Monday afternoon.

NYSEG reported about 500 customers out in Saratoga and Washington counties.

The Warren County Municipal Center and Human Resources Building will not open Monday morning because of a continued power outage in the area. County officials hope to open at 1 p.m. if power is restored.

Three individuals were displaced as a result of a structure fire at 27 Indiana Ave. in Queensbury on Friday morning.

Warren County has set a new high in the number of active COVID cases since the onset of the virus.

A Hudson Falls woman was sentenced recently to 4 ½ years in prison for drug sales.

Cove Road in Middle Granville, as it appears Monday morning. The road was washed out by flooding from Tropical Storm Irene.

Zappone Chrysler Dodge in Granville sustained significant damage due to flooding Sunday and Monday. Between 130 and 140 vehicles were damaged.

Flood waters forced the closure of the Route 22-149 intersection in Granville earlier Monday. The intersection has since been reopened.

The Slate Valley Museum in Granville is closed until further notice due to flooding.