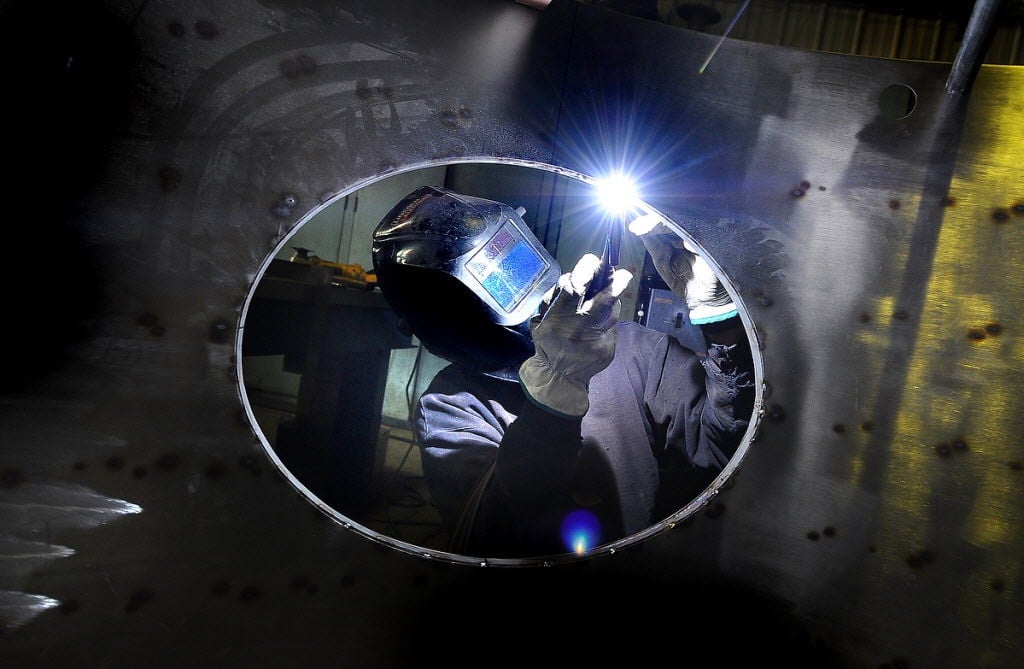 Bob Longdaue welds on a fermentation tank being made for the Common Roots Brewing Company at the Fronhofer Tool Inc. fabrication building in Cossayuna, Thursday, March 12, 2015. (Steve Jacobs — sjacobs@poststar.com) 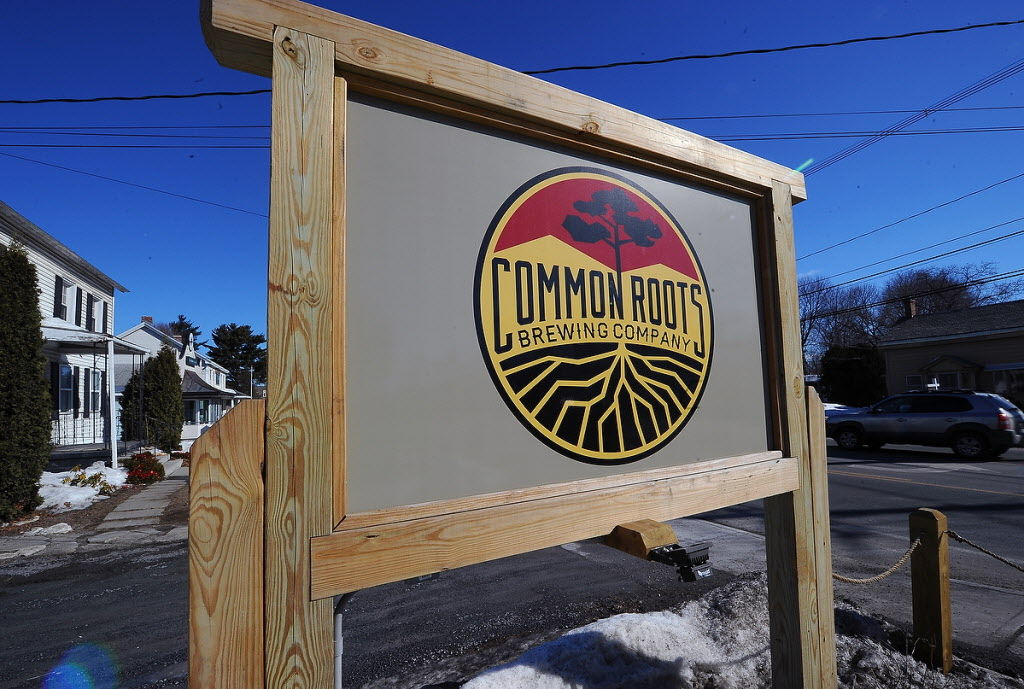 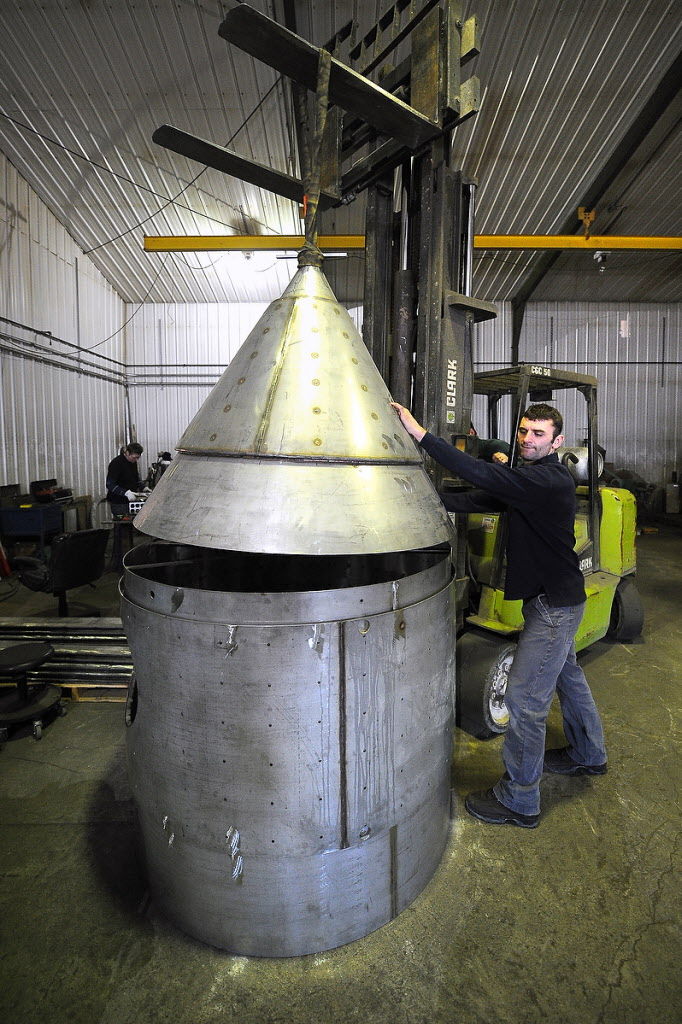 Paul Fronhofer demonstrates the assembly of a fermentation tank being made for the Common Roots Brewing Company at the Fronhofer Tool Inc. fabrication building in Cossayuna, Thursday, March 12, 2015. (Steve Jacobs — sjacobs@poststar.com)

ARGYLE -- The state’s Farm Brewery legislation, which has spurred the creation of several craft beverage makers and hops-growing operations in the region, is now boosting business beyond breweries and farms.

Fronhofer Design LLC, a business launched in January by Fronhofer Tool Inc., is finishing up work on its first 20-barrel fermenting tank and already has an order to build four more.

Paul Fronhofer, whose father launched the machine shop in 1980 on County Route 48 along Cossayuna Lake, expects the new division will need its own machine shop soon, marking the latest in a string of expansion projects for the firm.

“We have inquiries from a lot of (craft beverage makers), but I haven’t firmed anything up until we get this done and make sure it’s working,” Fronhofer said Thursday, as a crew worked to assemble the new tank. “We’re not going to put a product out that we don’t think is the best there is.”

The 20-barrel fermenter is being built at Fronhofer’s Route 29 fabrication plant in Greenwich. Once complete, it will go to Common Roots Brewing Co. in South Glens Falls.

That business is also feeling the effects of the Farm Brewery legislation, according to co-founder Christian Weber. He explained the package of laws, passed in 2012, wasn’t part of the business plan for Common Roots, which opened late last year.

The laws give craft brewers and distilleries that use New York-grown raw materials the same rights as wineries to sell their products at farmers markets and to open tasting rooms and retail stores, among other benefits.

As a result, Common Roots’ tasting room has been the primary point of sale for the brewery’s creations, Weber said.

“We pretty much sell out of all the beer we produce in the brewery, whether on pint sales or growler sales,” he said.

And that has meant a greater profit margin: $4 per pint, compared with 30 cents or so if the brewery were selling its beer through distributors, as for in Common Roots’ original business plan.

The windfall has spurred Weber to contract with Fronhofer to build another four fermenters — all with 30-barrel capacity — to take the brewery’s production from 1,500 barrels this year to about 3,500 next year.

“We’re not trying to be a volume-driven brewery,” Weber said. “We’re just trying to keep up with demand.”

For now, he has been hesitant to ink distribution deals with local restaurants or taverns, lest he be unable to provide beer on a consistent basis either at those establishments or in his own tasting room.

Fronhofer said the fermenting vessels he is making are similar to other commercially available tanks, although the cooling system is the work of his own engineers and designers.

The system allows a glycol solution to circulate between the outer and inner walls of the stainless steel tank, a feature that lets the brewer keep the vessel at whatever temperature is called for in the style of beer being made.

“The design itself is pretty simple; there’s not a lot to it,” Fronhofer said. “The glycol jacket is the important part. It’s kind of the trade secret.”

Inquiries from other craft beverage makers have been coming in, even though Fronhofer hasn’t done any advertising or marketing for the new division. The demand, he said, comes from a desire typical among craft brewers to brew with American-made equipment as much as possible.

“Breweries are a close-knit group, and word gets around,” Fronhofer said.

Many of the fermentation tanks available today are fabricated in China, although there are other American factories making the tanks.

Fronhofer envisions Fronhofer Design filling the niche of custom-made vessels. For instance, the Common Roots tanks needed to be several inches shorter than commercially available tanks because of the height of the brewery’s ceiling, Fronhofer said.

“And if something goes wrong with this, or you need an alteration or modification, we’re right here,” he added.

Fronhofer said the first tank should be finished in another week or two, and going forward, tanks will be able to be built in two to three weeks’ time.

He expects to deliver the next four tanks to Common Roots by the end of the year.

The company already has a 15-month backlog on the machine shop, however. That’s why Fronhofer thinks a new, 15,000-square-foot Fronhofer Design plant will likely be built within the next two years.

The company owns 30 acres of land on which to expand, and the plant will likely cost upwards of $1 million to build, Fronhofer said.

Another five workers would also be needed to staff the plant, he said.

You can read Scott Donnelly’s blog, Business Connection, at www.poststar.com.

Bob Longdaue welds on a fermentation tank being made for the Common Roots Brewing Company at the Fronhofer Tool Inc. fabrication building in Cossayuna, Thursday, March 12, 2015. (Steve Jacobs — sjacobs@poststar.com)

Paul Fronhofer demonstrates the assembly of a fermentation tank being made for the Common Roots Brewing Company at the Fronhofer Tool Inc. fabrication building in Cossayuna, Thursday, March 12, 2015. (Steve Jacobs — sjacobs@poststar.com)