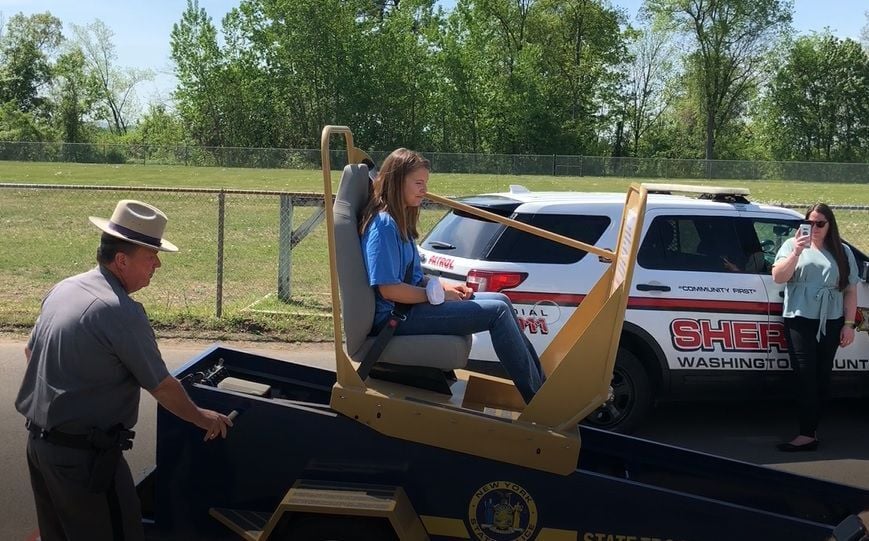 Fort Edward senior Caroline Boucher tries out "The Convincer," which simulates the impact of a low-speed crash, on Thursday. Looking on is state police Trooper Steve Rothwein. This was part of an event at the school by the Governor's Traffic Safety Committee to bring attention to the importance of wearing seat belts. 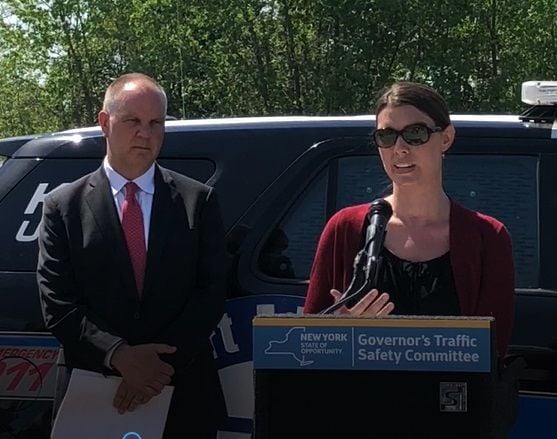 Jacy Good, a survivor of a car crash that killed her parents, talks Thursday in Fort Edward about the importance of wearing seat belts. Looking on is Chuck DeWeese, assistant commissioner for the Governor's Traffic Safety Committee.

FORT EDWARD — If students did not realize the importance of wearing seat belts, “The Convincer” was there to make the case.

A couple of Fort Edward seniors got to take a quick spin in the contraption that simulates the impact of a low-speed crash. They were strapped to a seat that moved down an inclined track before coming to a sudden stop. Without being strapped in, they would have fallen out of the seat.

“It felt like going on a roller coaster,” said 18-year-old Connor Aul.

“The Convincer,” along with law enforcement and school officials, were on hand Thursday as part of the Governor’s Traffic Safety Committee kickoff for its “Click It or Ticket” campaign.

Fort Edward Superintendent of Schools Dan Ward, who also took a spin in “The Convincer,” said he is pleased that his school got to host the event. He said he has felt passionate about driver safety since a tragedy in 2007, while he was principal of Fort Ann Junior-Senior High School. Three young people died after after they were thrown from a car that struck a utility pole. driven by a man who was speeding and under the influence of alcohol and marijuana.

“One horrific crash took the lives of three young people just weeks before graduation. It would devastate their families and friends, as well as our community and school,” he said.

Last year, police were not able to conduct as many enforcement details because of the COVID-19 pandemic, according to Chuck DeWeese, assistant commissioner for the Governor’s Traffic Safety Committee.

Possibly because of that, DeWeese said there was actually an increase of 100 traffic fatalities statewide in March, April and May than during a similar period in 2019.

“That is when volume on the roads was way, way down,” he said.

About 94% of people wear their seat belts, but this campaign is aimed at the 6% who do not, according to DeWeese.

“Every single time we sit down in the car, you get the control,” he said. “You have the opportunity to make the choice to save your life and the lives of others.”

He said the campaign is also drawing attention to the law passed last November that requires people to wear seat belts in both the front and back seats.

Back seat passengers who do not wear seat belts can become a projectile and thrown around the vehicle, according to DeWeese.

“It’s called the back-seat bullet,” he said. “Can you imagine what 150 pounds feels like coming forward at a force at the back of your head?”

The students also heard from Jacy Good, who is originally from Lancaster, Pennsylvania. Both of her parents were killed in a crash in 2008, when the family was on their way back from a graduation ceremony at Muhlenberg College in Allentown, Pennsylvania.

A driver talking on his cellphone went through a red light when making a turn. A tractor-trailer swerved to avoid that car and struck her family’s vehicle. Good said her father had been killed on impact. Her mother was in the back seat, but was not wearing her seat belt.

“We had stopped at a gas station 5 minutes before this happened, but when we left, my mom did not put her seat belt back on, which means my mom was that bullet,” she said, using DeWeese’s term.

Her mom was thrown into the front seat. She did not have a pulse when a nearby paramedic got to her.

“It will haunt me for the rest of my life. Would I still have my mom if she had had her seat belt on? I’ll never know, but it makes it hurt so much,” she said.

Good was seriously injured and in a coma for a couple months, but survived.

“That seat belt kept me inside the car. I had a really strong pulse. I wasn’t breathing, but that paramedic kept me alive,” she said.

“By wearing seat belts and properly buckling children into age- and size-appropriate car seats and booster seats, people can reduce their risk of serious injury and death in a crash by half,” he said.

An earlier version of this story incorrectly described the 2007 crash cited by Superintendent Dan Ward. Three young people died after they were thrown from the car that struck a tree. The driver was speeding and under the influence of alcohol and marijuana.

Communities in Louisiana come together after disaster

Police: Johnsburg woman crashed car while under influence of drugs

A Johnsburg woman was arrested on Monday after police said she was driving under the influence of drugs and crashed her vehicle.

A Corinth woman has been sentenced to 1 to 3 years in prison for stealing several chainsaws from a local business.

A Greenwich woman is facing felony charges for allegedly stealing more than $1,000 in property back in March.

Fort Edward senior Caroline Boucher tries out "The Convincer," which simulates the impact of a low-speed crash, on Thursday. Looking on is state police Trooper Steve Rothwein. This was part of an event at the school by the Governor's Traffic Safety Committee to bring attention to the importance of wearing seat belts.

Jacy Good, a survivor of a car crash that killed her parents, talks Thursday in Fort Edward about the importance of wearing seat belts. Looking on is Chuck DeWeese, assistant commissioner for the Governor's Traffic Safety Committee.