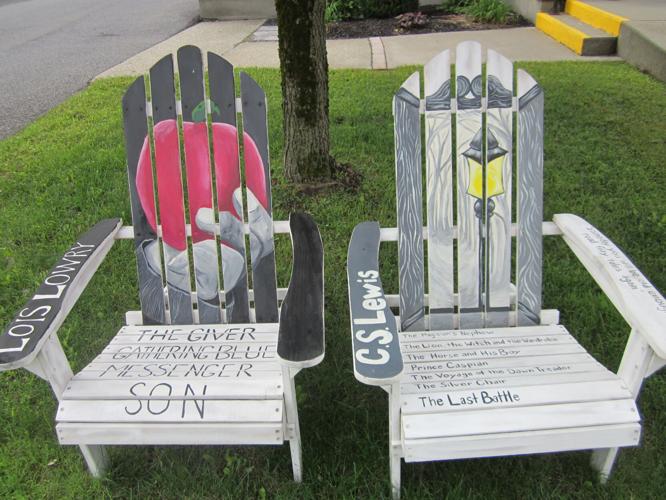 Anna Bailey's chairs, in front of Glens Falls National Bank & Trust in Cambridge, are based on Lois Lowry's young adult novels, left, and C.S. Lewis's "The Chronicles of Narnia," right. 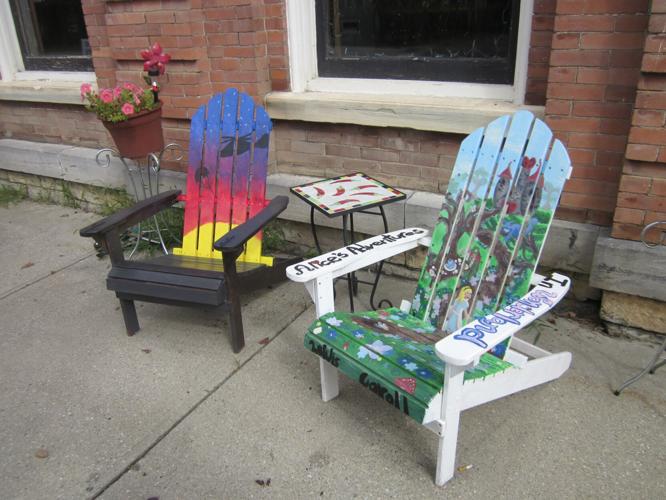 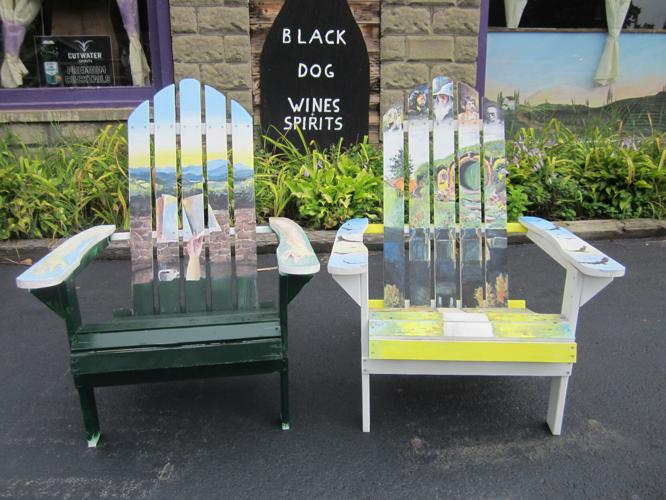 Madeline Flint's chairs, at Black Dog Wines & Liquor, show a book in front of mountains and characters from "The Lord of the Rings." 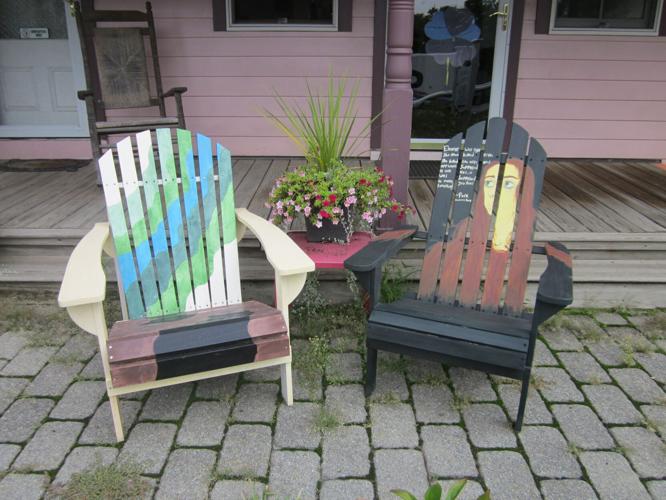 CAMBRIDGE — Colorful Adirondack chairs have been inviting passersby to sit and enjoy Cambridge village’s Main Street this summer. The chairs, painted by young local artists, were the idea of Connie Brooks, owner of Battenkill Books at 15 East Main St.

Brooks liked the decorated moose and catamount statues set up in Bennington’s business district and race horses in downtown Saratoga Springs. She knew communities outside the area had put out one-of-a-kind Adirondack chairs.

“For this community, (the chairs) are practical,” Brooks said. “I loved the idea” of having street decorations “and that it matched up with a practical thing.”

The project “started very small” in early spring, she said. Brooks envisioned the bookstore paying for up to four chairs to be placed around town. She wanted wooden chairs, not plastic, but no one locally had them at a price she could afford. She eventually found a source online.

Brooks put out a call for young artists ages 12 to 18 on Facebook.

“I thought I’d get two, maybe four,” she said. “I was overwhelmed by the number of kids who were tremendously excited. I wasn’t going to say no.”

She ended with 19 youngsters who committed to 23 chairs.

“They’re not limited to Cambridge, but they’re all local,” Brooks said.

Faced with more interest than she’d anticipated, Brooks asked for donations for the project via the bookstore’s Front Porch Forum and Facebook accounts.

“Everyone was so eager to contribute,” she said. “I had everything in hand or pledged in a matter of days.”

Local residents assembled the chairs and primed them.

“The primer was donated by Noble Ace Hardware,” Brooks said. “They heavily discounted the artists’ paints and got in more colors. They’ve been terrific partners on this. Getting the primer donated was huge.”

All together, the project cost about $2,000, Brooks said.

The project’s theme was books and reading. Brooks asked the artists for proposals “so the ideas would be aligned with my goals,” but otherwise didn’t tell them what to do. They started in May and most of the chairs were in place by late June. Many of the chairs are in pairs, mostly along the north side of East and West Main streets, from Noble Ace Hardware and Busy Bee Florist in the east to Black Dog Wine and Liquors in the west. All are outdoors except for the pair at Noble Ace Hardware, which are in the store window.

“There’s such a range of topics,” Brooks said. “I’m absolutely stunned by the talent.”

Many artists based their chairs on their favorite books, including C.S. Lewis’s Narnia Chronicles, “The Lord of the Rings,” the Harry Potter series, Lois Lowry’s young adult novels, characters from Greek mythology, “Alice’s Adventures in Wonderland,” and Dr. Seuss. Maizie Steele did a picture of Battenkill Book’s storefront and Madeline Flint depicted a hand holding a book with mountains in the background.

Brooks said she has no favorites.

All the chairs have been commented on and Brooks has already received offers to buy many of them. She was concerned that some chairs might disappear. She warned the artists, “If your chair is stolen, it’s a backhanded compliment.” To date, though, all the chairs have survived.

“It’s a chance you have to take,” Brooks said. “We wanted them to be accessible.”

Brooks will oversee an online auction of the chairs starting Oct. 1 and ending Oct. 15, so they’re off the street before winter. “The minimum bid is $40, which is ridiculously low for an Adirondack chair,” she said.

The chairs are coated with acrylic primer, acrylic artist’s paint, and sealer, so with care they should last for many seasons. The link to the auction site is https://battenkillbooks.betterworld.org/auctions/art-chairs-auction-2023-cambridge.

Any income from the auction beyond costs for next year will be donated to local charities.

“I’ll ask the kids where they’d like the excess to go,” Brooks said.

“The project has been an absolute delight,” Brooks said. “Some of the students I knew previously and some I did not.”

She plans to set out another batch of chairs next year. People have asked to have them out in time for the village’s Memorial Day parade.

“It will be interesting to see next year how many will do it again and how many new ones we’ll have,” Brooks said. “I would love to make it an annual tradition.”

Jamie L. Milin, 37, of Hudson Falls, was arrested on charges of fraud and deceit related to controlled substances.

NYSEG and National Grid worked Sunday to restore power to some communities in Washington County. 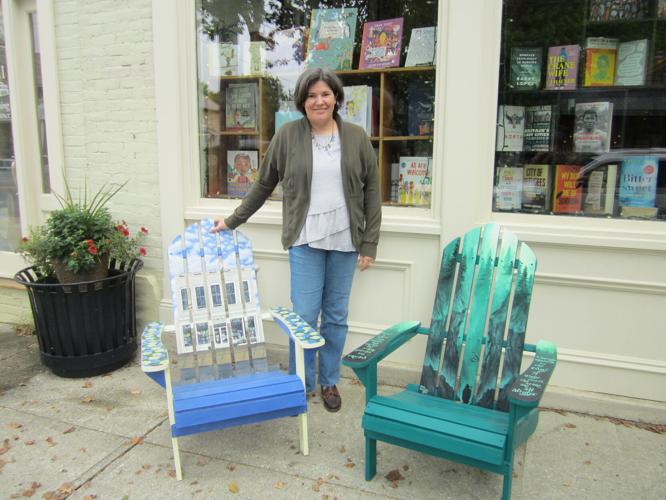 Connie Brooks, owner of Battenkill Books, stands with two of the Adirondack chairs painted by local young artists. All of the 23 chairs placed this summer along the village's Main Street have the theme of books and reading. Maizie Steele's design, left, is a picture of the Battenkill Books storefront. Althea Radocchia, right, used a "The Lord of the Rings" theme.

Anna Bailey's chairs, in front of Glens Falls National Bank & Trust in Cambridge, are based on Lois Lowry's young adult novels, left, and C.S. Lewis's "The Chronicles of Narnia," right.

Madeline Flint's chairs, at Black Dog Wines & Liquor, show a book in front of mountains and characters from "The Lord of the Rings."