Snow builds on Dix Avenue near Queensbury Avenue on Sunday afternoon. Expect a messy commute throughout Monday as the snow continues to accumulate. 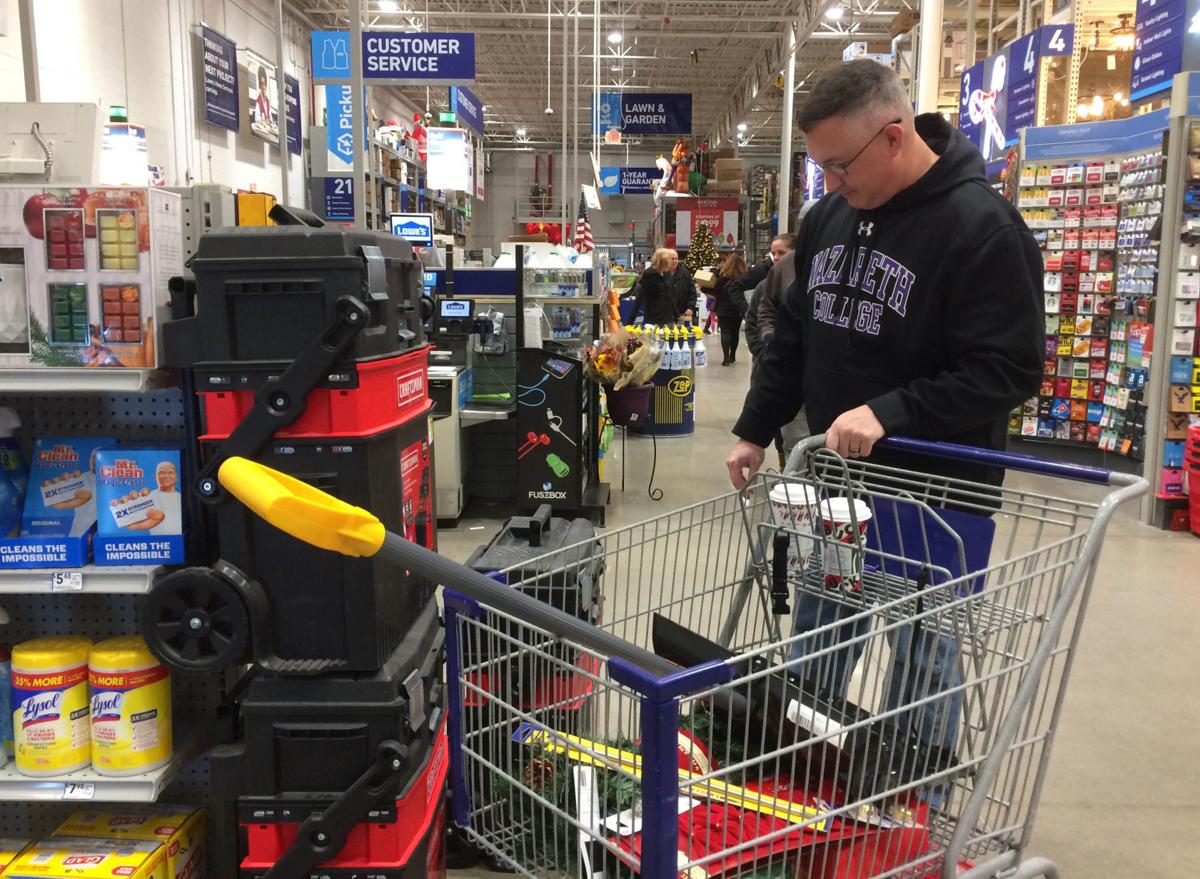 Scott Cross, of Queensbury picks up some items on Sunday at Lowe's on Quaker Road to prepare for the storm. Shovels and snowblowers will be put to good use as the region attempts to dig out as the forecast is calling for up to 20 inches of snow in some areas.

The wintry conditions caused a three-car accident involving a Queensbury town plow truck. The accident occurred at about 3:47 p.m. The truck was traveling east on Luzerne Road when it slid into the path of a 2016 GMC Acadia, striking the vehicle and injuring a 9-year-old back seat passenger, according to a news release from the Warren County Sheriff’s Office.

The truck continued to slide and then struck a 2006 Subaru Impreza, which was also traveling westbound.

The 9-year-old victim suffered minor injuries and was transported to Glens Falls Hospital for treatment. The operators of all 3 vehicles, as well as a 6-year-old passenger, were all uninjured, police said.

The conditions also caused at least nine accidents along the Northway between Exit 21 and Exit 25, according to the Warren County Sheriff’s Office activity log. There was no word of any serious injuries.

There was a report of a vehicle into a house at Thomas and Upper Turnpike Road in Granville Sunday evening. No further information was immediately available from the Washington County Sheriff’s Office.

“We’re trying to get some stuff for the winter storm,” said Scott Cross, of Queensbury, who had a shovel, along with some other Christmas supplies purchased with a gift card.

A winter storm warning is in effect for most of the region through 7 a.m. Tuesday.

The National Weather Service forecast calls for 10 to 20 inches in the greater Glens Falls region. Essex and Hamilton counties are not part of the advisory, with less snow expected there.

The winter storm will make commuting hazardous Monday morning and evening. Snow will be heavy at times with another 1 to 3 inches of accumulation possible, according to the National Weather Service. The high temperature will be nearly 31 and winds will be 13 to 15 miles per hour. The storm will finish up Tuesday morning. 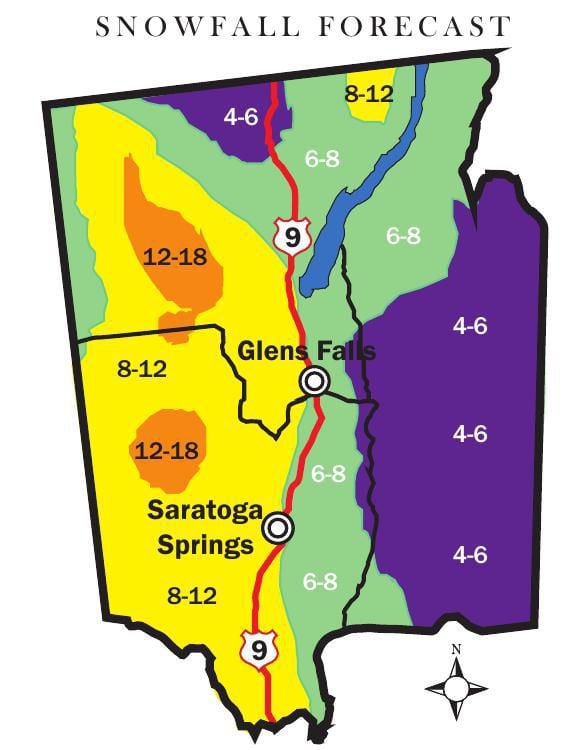 The cities of Glens Falls and Saratoga Springs have declared snow emergencies.

In Glens Falls, on-street parking is banned and vehicle travel should be avoided to allow plows to clear the streets and emergency vehicles to travel unimpeded. The ban expires at 6 a.m. Monday, with another set starting at 10 p.m. lasting until 6 a.m. Tuesday.

In Saratoga Springs, the snow emergency takes effect at 9 a.m. Monday and will be in effect until 9 p.m. Wednesday. All vehicles must be moved to a cleared or plowed area every 12 hours.

The village of Lake George postponed its special village board meeting scheduled for Monday.

National Grid and NYSEG warned residents to be prepared for possible power outages, as heavy snow could bring down tree limbs and utility lines.

For the latest on the local weather and a list of school closings, delays and service cancellations visit poststar.com/weather.

The same storm has been pummeling the U.S. for days as it moves cross country, dumping heavy snow from parts of California to the northern Midwest and inundating other areas with rain.

As of 12:30 p.m, more than 500 Sunday flights were canceled in the U.S., compared with about 400 on Saturday, according to flight tracking site FlightAware.

The storm has been blamed for several deaths.

The bodies of a boy and a girl, both 5, were found in central Arizona after their vehicle was swept away Friday while crossing a swollen creek.

Two adults and four other children were rescued by helicopter, but a 6-year-old girl is still missing. Rescuers are combing the area of Tonto Basin, about 50 miles northeast of Phoenix, with helicopters, drones, boats and dogs.

“We want to bring her home safely to her family,” said Lt. Virgil Dodd of the Gila County Sheriff’s Office. “She needs to come home today, and we’re going to do that.”

Two boys, ages 5 and 8, died Saturday near Patton, Missouri, when the vehicle they were riding in was swept off flooded roads.

A 48-year-old man died in a separate incident near Sedgewickville, Missouri, and a storm-related death was also reported in South Dakota.

Material from the Associated Press was included in this story.

For the latest weather info and a full list of school closings, delays and service cancellations visit poststar.com/weather.

Airlines have delayed flights across the country as the storms move east. Blizzard-like conditions will finish off the holiday weekend in the Great Lakes region.

Snow builds on Dix Avenue near Queensbury Avenue on Sunday afternoon. Expect a messy commute throughout Monday as the snow continues to accumulate.

Scott Cross, of Queensbury picks up some items on Sunday at Lowe's on Quaker Road to prepare for the storm. Shovels and snowblowers will be put to good use as the region attempts to dig out as the forecast is calling for up to 20 inches of snow in some areas.