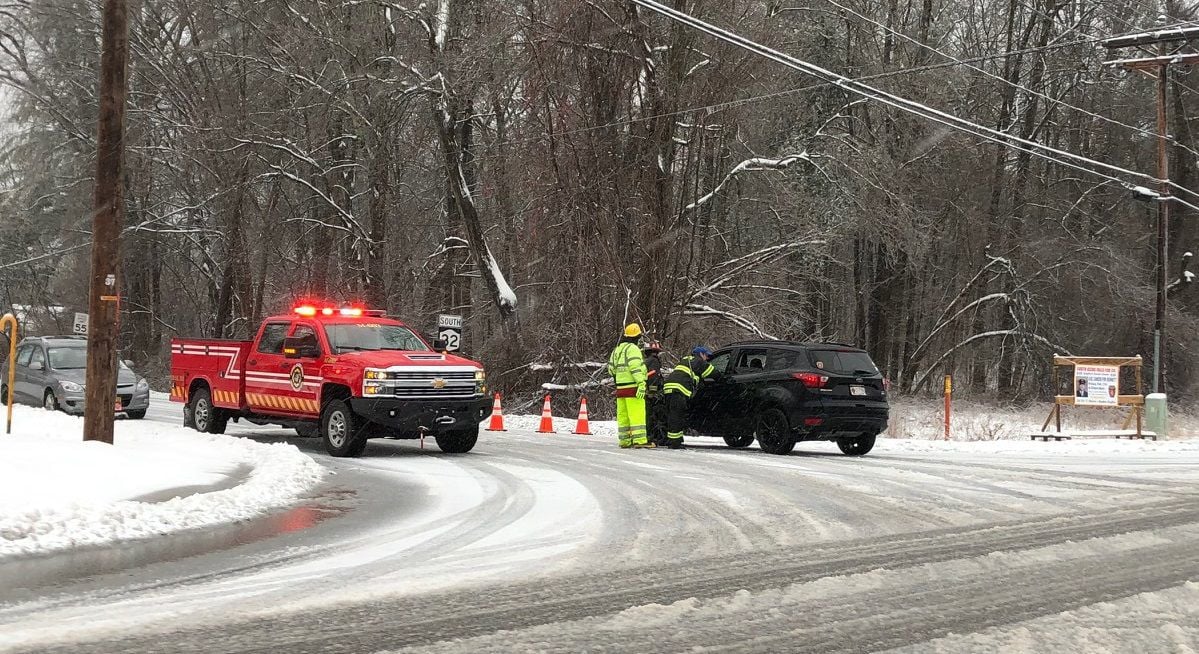 Route 32 in Moreau was closed for part of Friday because of a downed tree. 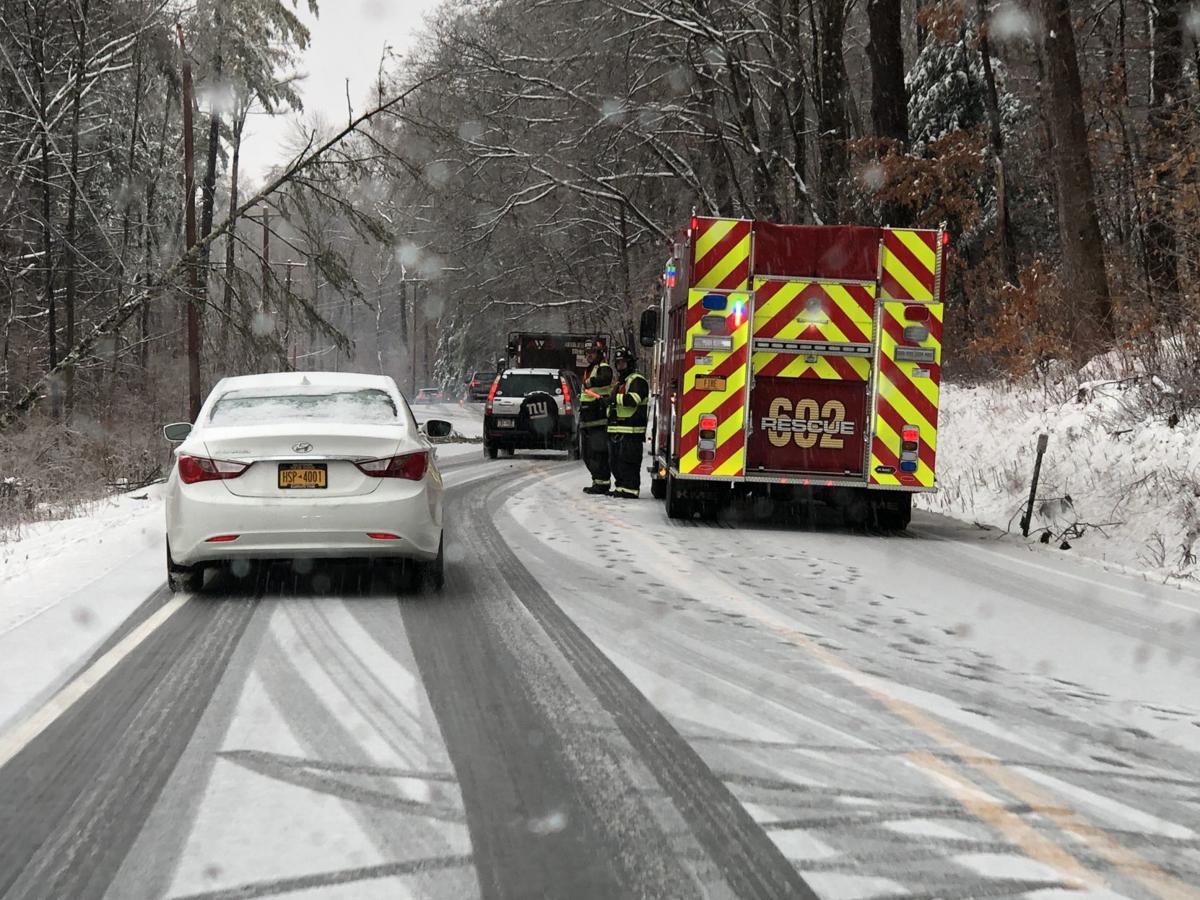 Gansevoort firefighters close Gansevoort Road as a tree leans on a electrical wire just south of their vehicles on Friday morning. Fire departments and police around the region dealt with dozens of downed trees and wires during Friday's storm. 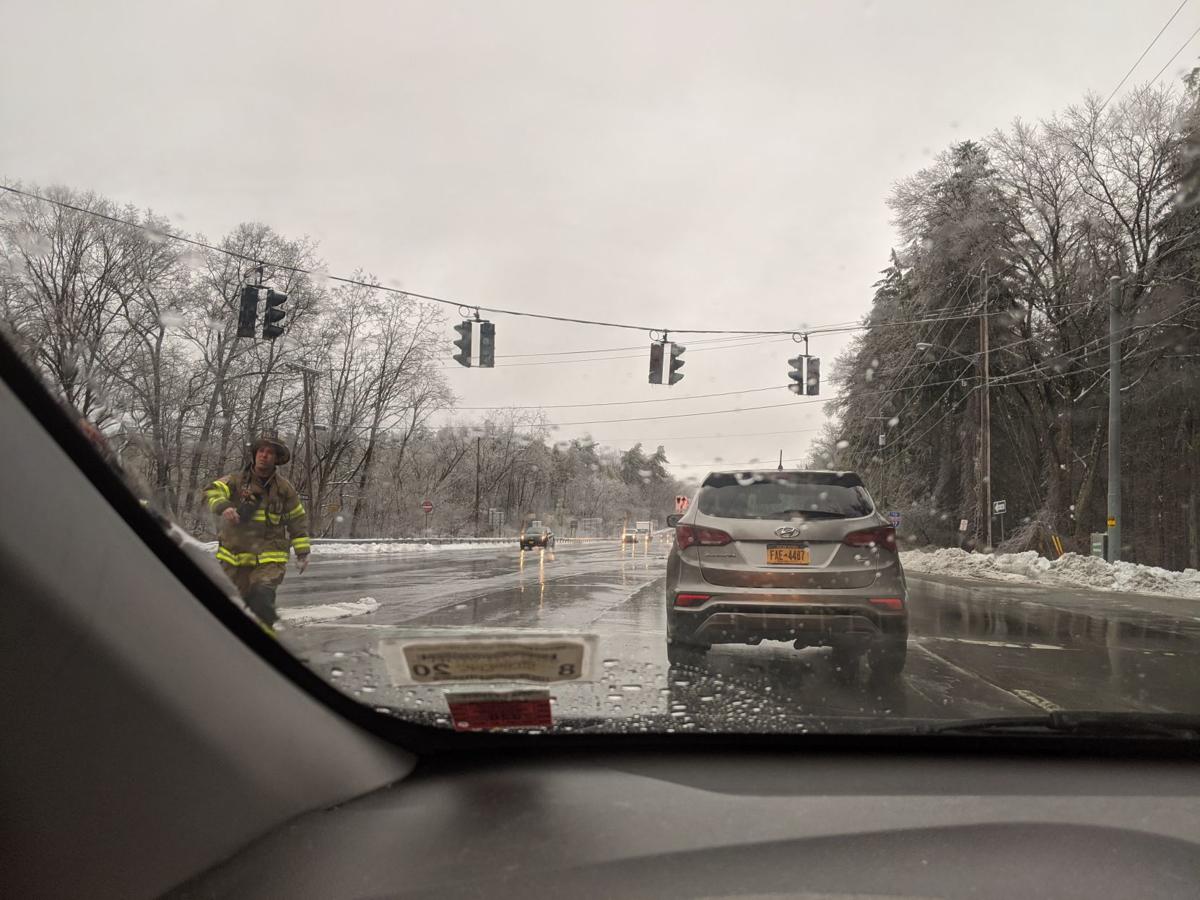 A traffic light on Route 9P near Northway Exit 14 was out of service in Saratoga Springs on Friday. National Grid received reports of outages from hundreds of customers across Saratoga County due to the storm. 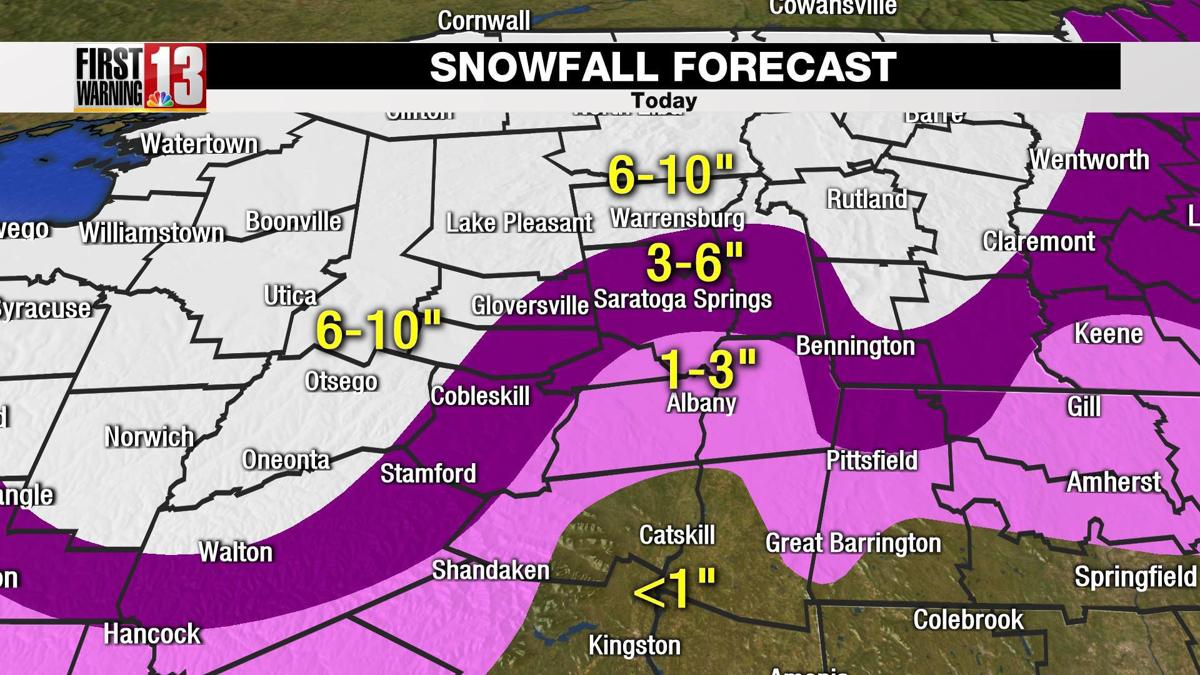 Tens of thousands of local residents lost electricity Friday as freezing rain, sleet and snow brought down trees and utility lines around the region. Snow and freezing rain led to dozens of accidents on the region’s roads as well.

National Grid reported more than 62,000 local customers without power as of 8:30 p.m. Friday, down from a high of 67,000 earlier in the evening. Worst off were Saratoga Springs and the towns of Wilton, Moreau and Queensbury, as well as the towns of central and northeastern Warren County.

More than half of the National Grid customers in Warren and Saratoga counties were out as of late afternoon. Outages continued to be reported well into the evening.

Restoration was tentatively listed by 8 p.m. Friday for many, including 21,000 without power in Warren County and 5,400 in Washington County. The company’s website listed “assessing condition” for many outages as of Friday afternoon, and listed 8 p.m. Saturday for full restoration in Saratoga County.

National Grid spokeswoman Virginia Limmiatis said utility crews were working on outages Friday afternoon, but conditions that included up to a half-inch of ice in northern Saratoga County was making the repairs difficult. And high winds expected later Friday and early Saturday will only add to the problems.

Warren County Emergency Services Coordinator Brian LaFlure said National Grid had not given any estimates for restoration to his office as of early evening Friday.

Police and fire departments around the region were dealing with dozens of calls for trees and wires down from northern Warren to central Saratoga and southern Washington counties. Many fire departments had multiple calls at one time, with Bolton firefighters handling three tree-related calls at the same time Friday afternoon.

“We have calls going all over the place,” Warren County sheriff’s Lt. Robert Smith said.

Numerous roads, including Route 9 in Lake George and Route 9N in Hague, were closed for part of the day because of tree and utility issues or slick conditions on hills, so expect detours if headed out. The southbound lanes of the Northway near Exit 18 were closed by a 1:30 p.m. crash involving a tractor-trailer, and dozens of other minor accidents occurred on the interstate as well.

The National Weather Service reported 8 to 9 inches of snow in much of the region, on top of a quarter to third of an inch of ice in much of the Glens Falls area. Northern Warren County got up to a foot of snow in some places.

A number of schools closed, delayed their opening or planned to close early because of icy roads and snow that was expected later in the day. Many businesses closed early as well.

Precipitation turned to snow around the region by mid-morning, with up to 8 inches expected in the Glens Falls area, but areas to the north were expected to see more than a foot before the storm wraps up late Friday.

High winds were to accompany the snow, with gusts of up to 40 mph possible late Friday. That could bring down trees, branches and utility lines and cause outages.

Extreme cold will follow for the weekend, with lows well below zero expected Sunday. More snow is possible Monday.

Snow emergencies were declared by some communities, including the city of Glens Falls and the village of Whitehall, for overnight Friday through Saturday morning to keep cars from parking on streets in order to facilitate street plowing.

For those headed for hiking or snowshoeing this weekend, the state Department of Environmental Conservation warned of avalanche risk in the Adirondack High Peaks because of heavy snow accumulations.

Power outages continue to be a major problem in parts of the region, with tens of thousands still out. Shelters are being set up.

Power outages dwindle in Warren County with about 2,000 extending into Monday

Thousands remain without power in Warren County following Friday's storm. Many were holding out hope for restoration late Sunday, but now Monday by 3 p.m. is anticipated.

First responders and public works and utility crews who dealt with damage from the Feb. 7 ice and snow storm were praised by officials Friday.

Route 32 in Moreau was closed for part of Friday because of a downed tree.

Gansevoort firefighters close Gansevoort Road as a tree leans on a electrical wire just south of their vehicles on Friday morning. Fire departments and police around the region dealt with dozens of downed trees and wires during Friday's storm.

A traffic light on Route 9P near Northway Exit 14 was out of service in Saratoga Springs on Friday. National Grid received reports of outages from hundreds of customers across Saratoga County due to the storm.