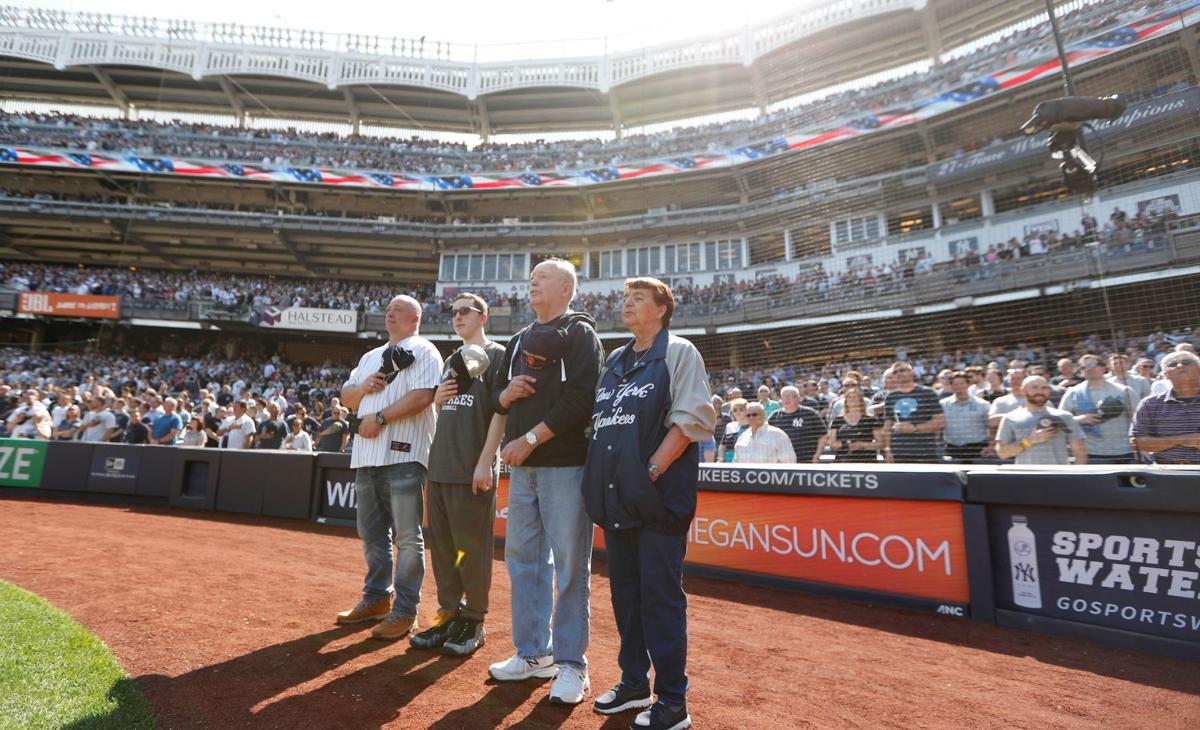 Keith Bishop of Hudson Falls was honored for his service in April during the 7th inning stretch at Yankee Stadium. From left to right, Scott Bishop, Mason Bishop, Keith Bishop, and Mary Bishop. 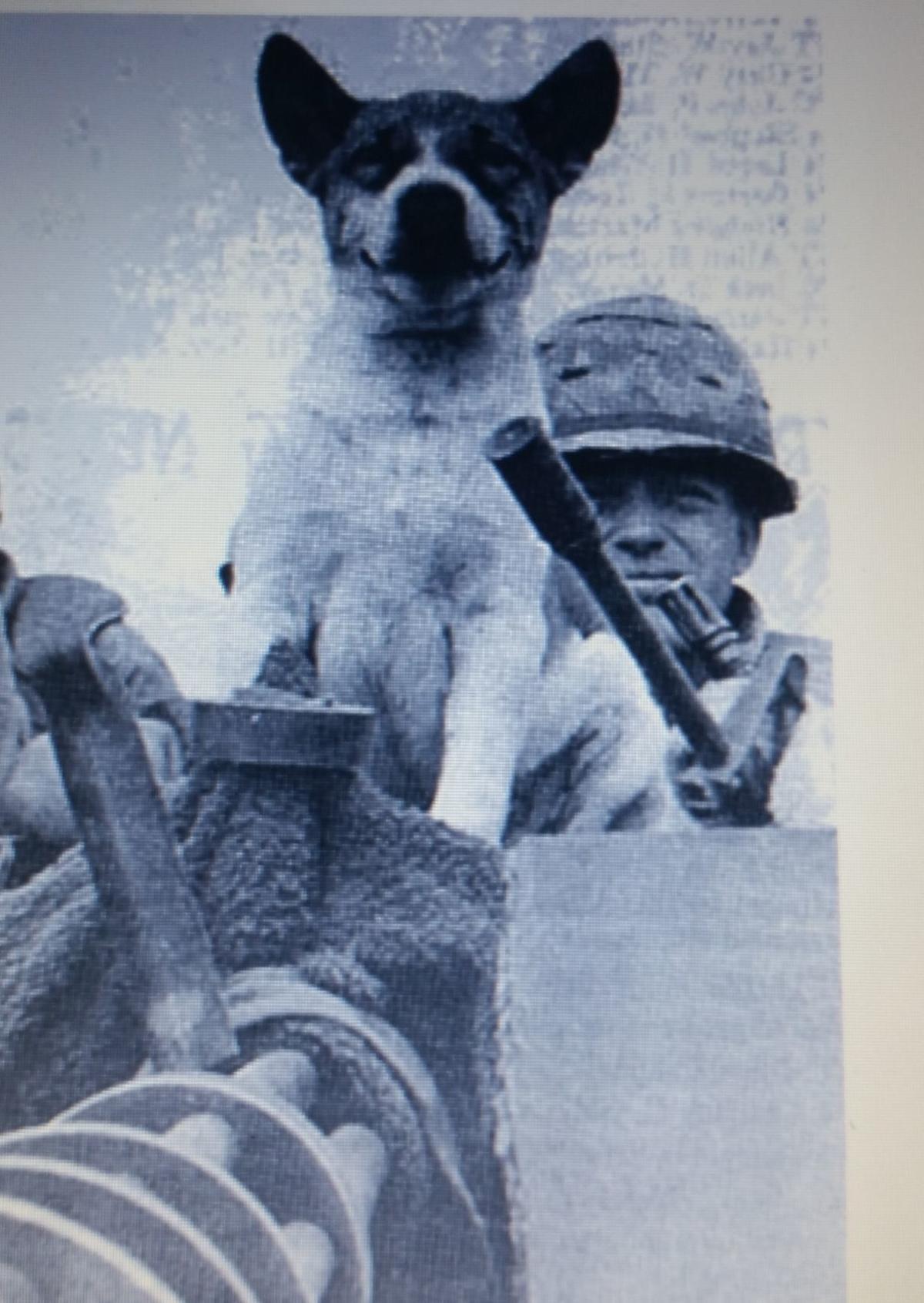 Keith Bishop of Hudson Falls is seen in Vietnam with a dog named Sue and a mini gun. This photo was featured in the Stars and Stripes magazine. 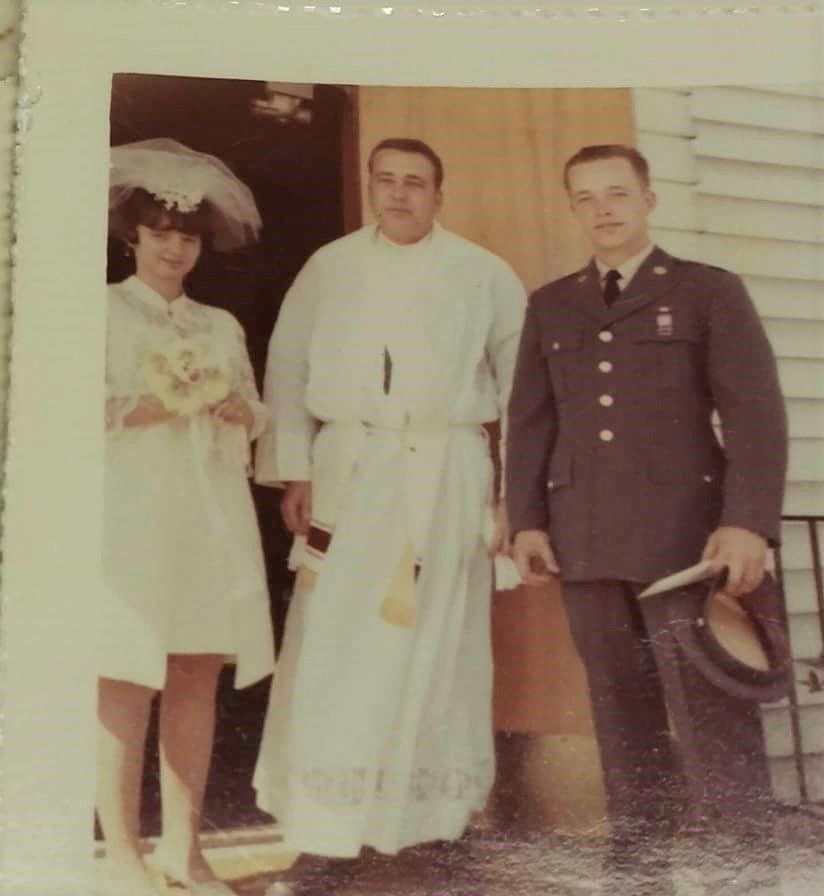 Mary and Keith Bishop were married Aug. 23, 1969 in Fort Lewis, Washington. Keith Bishop left for Vietnam in September, while Mary was just a few months pregnant.

Keith Bishop was not at all surprised when his draft letter arrived in the mail. It was the spring of 1969, and he considered it his duty to serve his country in Vietnam.

“My father and my uncles served in World War II. I knew it was my turn. I was ready to go,” he said.

The Hudson Falls native headed to basic training at Fort Dix in New Jersey and then in May went to Advanced Infantry Training at Fort Lewis in the state of Washington.

“I followed him to base and that’s where we were married,” said Mary Bishop, his wife of now 50 years.

“We discovered we were pregnant around June, and we knew we had to get married before he left. We were married Aug. 23, 1969. He left in September,” she said.

Bishop was assigned to Company B, 2nd Battalion, and 22nd Infantry.

“We were a mechanized infantry with APC carriers,” Bishop said. APC, or armored personnel carriers, look similar to large tanks. Bishop served as a “50 gunner,” which means he was in charge of deploying the APC’s .50-caliber machine gun, and as a track commander.

Bishop said his primary duties were to ambush and sweep areas, usually on an APC but sometimes on foot via helicopter drops to a given location.

“We were right on the end of the Ho Chi Minh trail near the Cambodian border. It was nicknamed rocket alley and it was a bad area,” he said.

Bishop explained that he and his unit would be on assignment for about 30 days and would then return to the massive Army base on Cu Chi before going out for another 30 days.

“You’d be in the same clothes, eating combat rations made in the 1940s. Cigarettes were traded like money. We usually traveled at night to sweep through areas, but it was never over. You’d clear an area and have to go back later and clear it again,” he said.

Bishop explained that the most difficult part of Vietnam wasn’t actually the combat, but the land mines and booby traps.

“You’d see combat maybe once a month. But the land mines and traps had you always afraid to take another step,” he said.

Bishop told one such story of a soldier named Dennis Nelson from Flushing, the neighborhood in the New York City borough of Queens, who was on an APC with Bishop.

“He’d only been in Vietnam for a few months. He jumped off the track (wheels of the APC), probably to go pee or something and just like that a land mine blew both his legs off. We went to grab him a cigarette but he was dead before we handed it to him,” Bishop said, tears forming in his eyes.

“It was like that. You’d be in this small space with six or seven guys assigned to a tank for a month at a time, but you’d try not to get too close. Some of you were probably going to die,” he said.

Bishop did see his share of combat, even receiving the Army Commendation Medal for heroism during a firefight in December 1969. While engaging a “large enemy force,” Bishop’s machine gun malfunctioned. “Private Bishop, with complete disregard for his own safety, exposed himself to the hail of fire as he secured a new machine gun,” according to military documents.

Among other honors, Bishop also earned a Purple Heart for being wounded in action in March 1970.

“We were on the ground doing sweeps. I don’t know if it was a land mine or a booby trap, but I was hit in the face with shrapnel and evacuated to the hospital,” Bishop said.

“Two of the soldiers, all that was left of them were their boots. I felt lucky to be alive — but that’s how you always felt there. Everyday you were just hopeful you’d survive,” he said.

Bishop spent several days at the 12th Evacuation Hospital in Cu Chi. He was unable to eat solid food due to shrapnel injuring his jaw.

Bishop said there were a few bright spots during his service, including seeing the Bob Hope show when it came to Cu Chi, and the day he heard his daughter was born.

“I was in a foxhole when I heard I was a father. They had a shortwave radio that kept cutting in and out. I knew the call was coming, but I didn’t know when or that it was a girl,” Bishop said.

Margaret was born in February 1970. Bishop was granted return to the states in March, weeks after his injury.

“I was so relieved,” Mary Bishop said. “I would watch the three channels we had on TV back then and know where all the causalities were. I wrote every day, but mail was unreliable. If black cars parked outside our home I would panic that he had been killed. I needed him to come back for our new family and I was thankful when he did.”

The couple still lives in Hudson Falls today, and has grown their family. In addition to Margaret, they have two sons, Keith, Jr. and Scott. They are also the proud grandparents to six grandchildren and two great-grandchildren.

Keith Bishop of Hudson Falls was honored for his service in April during the 7th inning stretch at Yankee Stadium. From left to right, Scott Bishop, Mason Bishop, Keith Bishop, and Mary Bishop.

Keith Bishop of Hudson Falls is seen in Vietnam with a dog named Sue and a mini gun. This photo was featured in the Stars and Stripes magazine.

Mary and Keith Bishop were married Aug. 23, 1969 in Fort Lewis, Washington. Keith Bishop left for Vietnam in September, while Mary was just a few months pregnant.