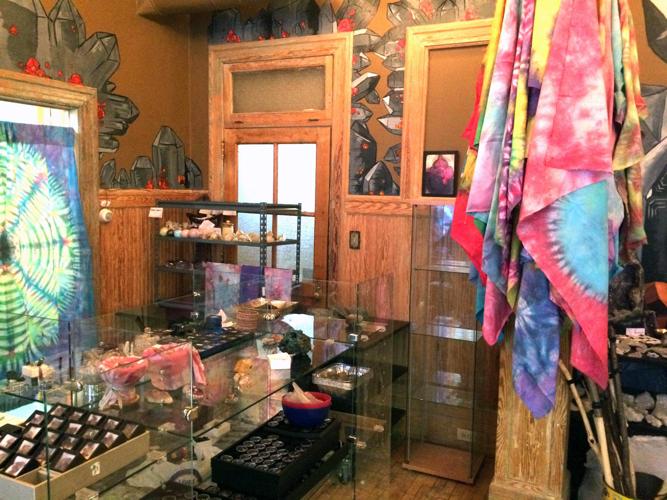 Seen here is a display of merchandise in The Stone Stash's new larger location, which is just down the hall from the former space in The Shirt Factory. The business is taking over the space vacated by Dickinson's Delights cafe. 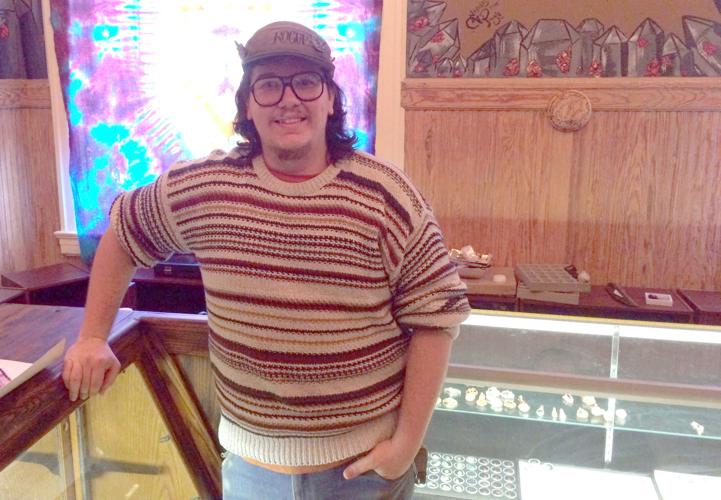 GLENS FALLS — Tyler Poquette is accustomed to having to move his business of selling precious gems.

When he and business partner, Steven Pugh, grew out of Poquette’s studio apartment, they relocated to the basement of Pugh’s parents’ house. They grew out of that space last July and moved into The Shirt Factory on Lawrence Street. Poquette’s fiancée, Ashley Barnes, is a third partner in the business.

Now, they’re on the move again but just down the hall. They are taking over the space vacated by Dickinson’s Delights café, whose owners closed their retail operation to focus on their wholesaling business and catering.

Poquette said they were excited when they heard the space would be available.

“We jumped on it right away,” he said.

The new space is 500 square feet and includes an office, more than double the 120-square-foot room they were in previously. They have tripled the glass display cases and added a bookcase.

The owners have spent the last month renovating the new space to open on Thursday.

Poquette is particularly proud of a backlit UV display case that he has for gems that react to light.

Poquette said he finally has the room to display tapestries. Before, he had them folded up.

“I think in seven months, I sold one,” he said.

He also has painted on the walls an image of a smoky quartz with spessartine garnet stones, one of his favorite gems.

One corner of the store will be dedicated to a consignment shop for local artisans who are selling pendants or other jewelry.

Some people like gems because they attribute metaphysical healing properties to them. Others like how they look. Poquette said he first got interested in collecting gems when he saw a fluoride tower display.

“I thought it looked pretty cool. I was willing to pay $20,” he said. “Before I knew it, I was spending $200 a week on my own personal collection.”

He estimated he has more than 2,000 crystals in the store.

“I try to have a bit of everything,” he said.

Anything obelisk-shaped and anything amethyst are popular, he said.

He specializes in setting up collections of inexpensive stones for people who are interested in trying this hobby, he said.

“So they don’t have to waste money on something they may or may not like,” he said.

“Every one of the stones here has a story,” he said.

Poquette said he likes digging up the stones and being possibly the first humans that have touched them.

The store fills a niche in the market.

“It’s the only local rock shop. The next closest is Saratoga,” he said.

On Saturday, the shop will host an informal opening celebration in the new space. The local music group John & Amy will be playing acoustic music and refreshments will be served.

Michael Goot covers the city of Glens Falls, town and village of Lake George and other northern Warren County communities. Reach him at 518-742-3320 or mgoot@poststar.com and follow his blog at http://poststar.com/blogs/michael_goot/.

Seen here is a display of merchandise in The Stone Stash's new larger location, which is just down the hall from the former space in The Shirt Factory. The business is taking over the space vacated by Dickinson's Delights cafe.