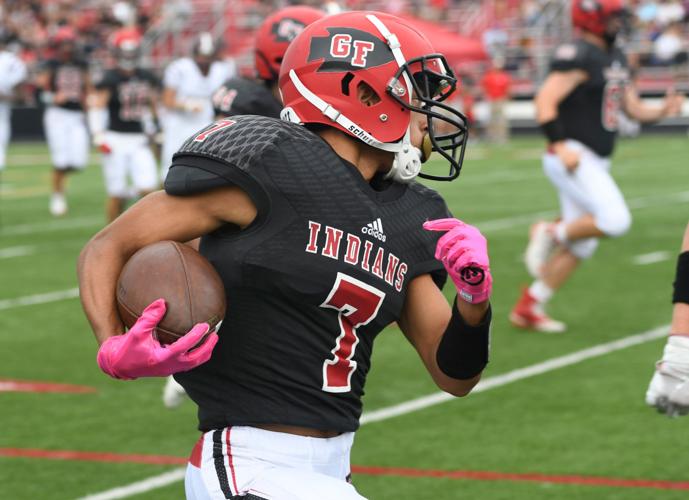 Glens Falls running back Aalijah Sampson runs for a first down during a 2019 game in Glens Falls. The Indians have used the arrowhead logo for decades. The state Education Department on Thursday ordered that school districts with Native imagery remove them by July or risk losing state funding and removal of school officers. 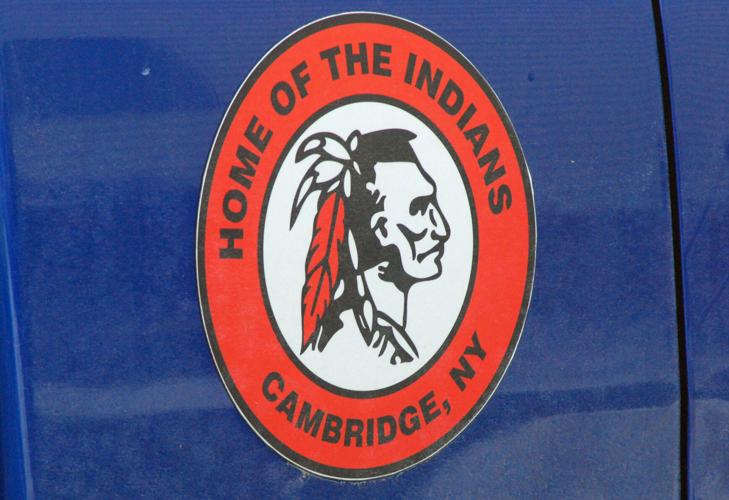 The Cambridge Central School District's logo is seen here on the side of a vehicle. The state Education Department has issued an order requiring all school districts with Native imagery to remove them by July, or risk losing state funding or removal of school officers.

Local school districts with Native American mascots and imagery will be required to remove them by July or risk losing state funding, under a directive issued on Thursday by the state Education Department.

Senior Deputy Commissioner James Baldwin sent a letter to school districts reminding them that then-Commissioner Richard Mills in 2001 had issued a memo saying that the state concluded that “use of Native American symbols or depictions as mascots can become a barrier to building a safe and nurturing school community and improving the academic achievement for all students.”

Baldwin said that research has shown that use of mascots and indigenous symbols has had a negative impact on not only indigenous students but all students.

He noted that the Dignity for All Students Act prohibits actions by districts that cause emotional harm or a hostile environment.

“Schools are learning environments; students learn as much through observation of their surroundings as they do from direct instruction. In addition to their legal obligations, boards of education that continue to utilize Native American mascots must reflect on the message their choices convey to students, parents, and their communities,” the memo went on to say.

Other penalties if districts do not comply with removal of the imagery could include removal of school officers, according to the memo.

The memo said that the districts could use Native American team names, logos or imagery with the approval of a recognized tribe.

Some districts have phased out the imagery since the original memo two decades ago. However, others have kept the native imagery, including the Cambridge Central School District. The Cambridge Board of Education had voted in June 2021 to retire the logo and mascot, but a new board reversed the decision the following month. Commissioner Betty Rosa faulted the board for not offering any evidence as to why the change and ordered the logos removed.

The district appealed the ruling in a lawsuit in state Supreme Court of Albany County, which upheld the commissioner’s decision. The school board voted last month to pursue further appeals.

“The attorneys are continuing the work to perfect the appeal and complete the legal process,” the district said in a statement posted to its website in response to the state’s ruling.

Other local school districts with Native mascots reacted on Friday to the decision.

The Glens Falls City School District’s athletic teams use the Indians moniker. The district said in a statement on its website that the district has every intention of honoring this ruling. School officials have yet to determine a timeline for removal of Indian-associated items on sports uniforms, furniture and in buildings. The district said the turf field is already scheduled to be replaced as part of a capital project.

“This decision from the state was made without our consultation, and we are digesting the decision in real time, just as many of you are as well. We want to create a process to work together as a community and figure out how to best navigate this new road we’re traveling down together,” the statement said.

“Our community has long embraced the ‘GF Nation’ moniker as a source of pride and togetherness. While we’re at the very beginning stages of this process for finding a new mascot, we feel it’s important to look back on our unique legacy and create something original that reminds us all of where we come from and what we represent,” the statement went on to say.

School officials say the district wants to include students in the process.

The Lake George Central School District is also affected. Its team name is the Warriors. Superintendent John Luthringer said in a statement that “for the better part of the last two decades, Lake George Central School District has thoughtfully been working toward compliance since the initial memorandum put forth by NYSED Commissioner Richard Mills in 2001 with the use of the LG symbol.”

“At this time, NYSED has indicated they are developing regulations that will clarify school districts’ obligations. Once the clarification document comes out, we will determine the next steps for the district. We will keep the district and community informed as we learn more,” he added.

The Lake George Board of Education in November 2021 had voted to pass a resolution designating the warrior Indian logo as a “heritage symbol” and vowed to begin a conversation over its future use.

The Corinth Central School District’s team moniker is the Tomahawks. Superintendent of Schools Mark Stratton did not immediately return a message seeking comment.

The National Congress of American Indians, which maintains a database of K-12 schools that have Native American-themed mascots, puts the number at just over 1,900 schools across the country in 970 school districts, including more than 100 schools in New York.

Material from the Associated Press was included in this story. Michael Goot is night and weekend editor of The Post-Star. Reach him at 518-742-3320.

The Cambridge Central School Board of Education will go ahead with an appeal of the judge’s ruling upholding removal of the school’s Indian mascot.

The Lake George school board is beginning a conversation over its future use of its warrior Indian logo.

Trump's tax returns are handed over to House Committee

Trump's tax returns are handed over to House Committee

Glens Falls running back Aalijah Sampson runs for a first down during a 2019 game in Glens Falls. The Indians have used the arrowhead logo for decades. The state Education Department on Thursday ordered that school districts with Native imagery remove them by July or risk losing state funding and removal of school officers.

The Cambridge Central School District's logo is seen here on the side of a vehicle. The state Education Department has issued an order requiring all school districts with Native imagery to remove them by July, or risk losing state funding or removal of school officers.