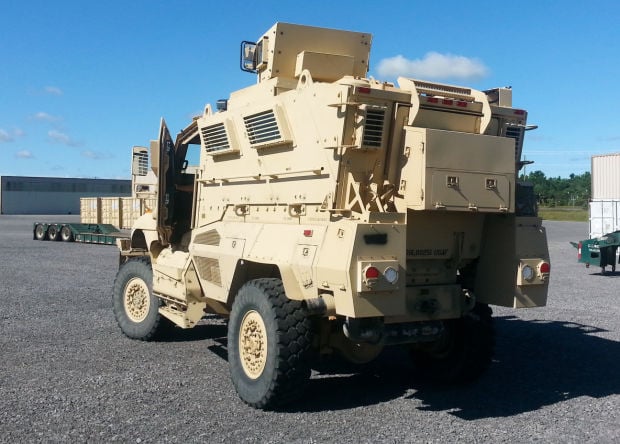 The rear view of a MRAP vehicle is pictured. The federal government gave Warren County four vehicles that will be used by ERT. 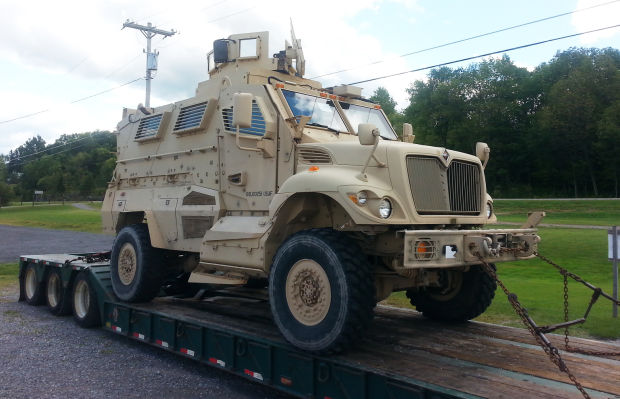 The 19-ton mine-resistant ambush protected (MRAP) armored vehicle is seen on a flatbed as it arrives in Warrensburg. The county received four vehicles from the federal government to be used by Warren County Sheriff Office’s Emergency Response Team.

It sounds almost too good to be true.

But that’s what Warren County Sheriff’s Office has been able to finagle over the past 18 months or so to outfit its Emergency Response Team.

The latest acquisition is a massive military “mine-resistant ambush protected” (MRAP) armored vehicle given to the county for free by the federal government.

The Sheriff’s Office took custody of the vehicle Thursday, and it’s awaiting a paint job and some minor electrical work before it is ready for use by the agency’s Emergency Response Team, Sheriff Bud York said. It will not be used for routine patrol, but will be used for transportation and protection of the ERT.

“We could use it right now if we had to,” York said. “I’m hoping we never have to use it, but look at what happened in Boston. These days you never know.”

It comes after the county received two free military Humvee vehicles for use by the ERT, and a former Brinks armored car for $10.

The 1993-vintage armored car was painted black and retrofitted by the county Department of Public Works, with new steps welded to it and interior changed to accommodate the 13-person team. Outfitting of the vehicle was paid for through asset forfeiture funds from drug dealers.

It is now the team’s main transportation vehicle, though the arrival of the MRAP may change that.

All of the repair, rehabilitation and maintenance costs for the vehicles is paid through asset forfeiture funds from drug dealers.

The Sheriff’s Office drug unit has received $516,162 from drug dealers since 2008, and is awaiting another $700,000 through a single major federal drug case.

The armored vehicle was the type of personnel carrier used by U.S. forces in the Middle East in recent years. Warren County Undersheriff Shawn Lamouree applied for the county to receive one, and last week it was trucked from Fort Drum to Warrensburg.

It weighs 38,500 pounds, stands 10 feet tall and gets about 1 mile per gallon of fuel. Without a gun turret it is worth $700,000, but with the turret that Warren County’s vehicle has, it is worth around $1 million, York said. (There is no gun in the turret).

Nearly 500 law enforcement agencies around the country sought MRAPs through the program, with the nearest local police agencies to receive them in Clinton and Jefferson counties, Lamouree said.

Lamouree said the MRAP the county received was apparently used for training and not in combat. He routinely watches the bulletins issued by the federal government for surplus military equipment being given to municipalities and police agencies, and said he also has gotten medical equipment through the program.

“These vehicles were just going to be cut up for scrap if they aren’t used,” he said.

The Sheriff’s Office ERT is called into action for standoffs with armed suspects, drug raids and other situations in which officers are dealing with particularly dangerous scenarios.

The Sheriff’s Office ERT provides assistance to local police agencies, twice in recent years helping end armed standoffs in Glens Falls. In those cases before the Warren County agency had an armored vehicle, the agencies had to wait for State Police vehicles to arrive from Albany before the standoffs ended peacefully.

“I’m glad to see they have this,” Glens Falls Police Chief Will Valenza said. “This will certainly cut the response times down in these situations.”

While they acknowledge that there are critics of “militarization” of police forces, York and Lamouree said the Sheriff’s Office believes the vehicles and equipment are important assets that couldn’t be passed up when being given away.

In an era of terrorist attacks on U.S. soil and mass killings in schools, police agencies need to be ready for whatever comes their way, the sheriff said. The vehicle will also serve as a deterrent to drug dealers or others who might be contemplating a show of force, York said.

“We’re prepared,” York said. “Our ERT team is as good as anyone out there. If something major were to happen, we don’t have to wait for the state or federal government. We’re ready to go.”

Looking back on local history: Sept. 12

Take a look back at local history. Here are the top stories for Sept. 12 from one, five and 10 years ago.

The rear view of a MRAP vehicle is pictured. The federal government gave Warren County four vehicles that will be used by ERT.

The 19-ton mine-resistant ambush protected (MRAP) armored vehicle is seen on a flatbed as it arrives in Warrensburg. The county received four vehicles from the federal government to be used by Warren County Sheriff Office’s Emergency Response Team.