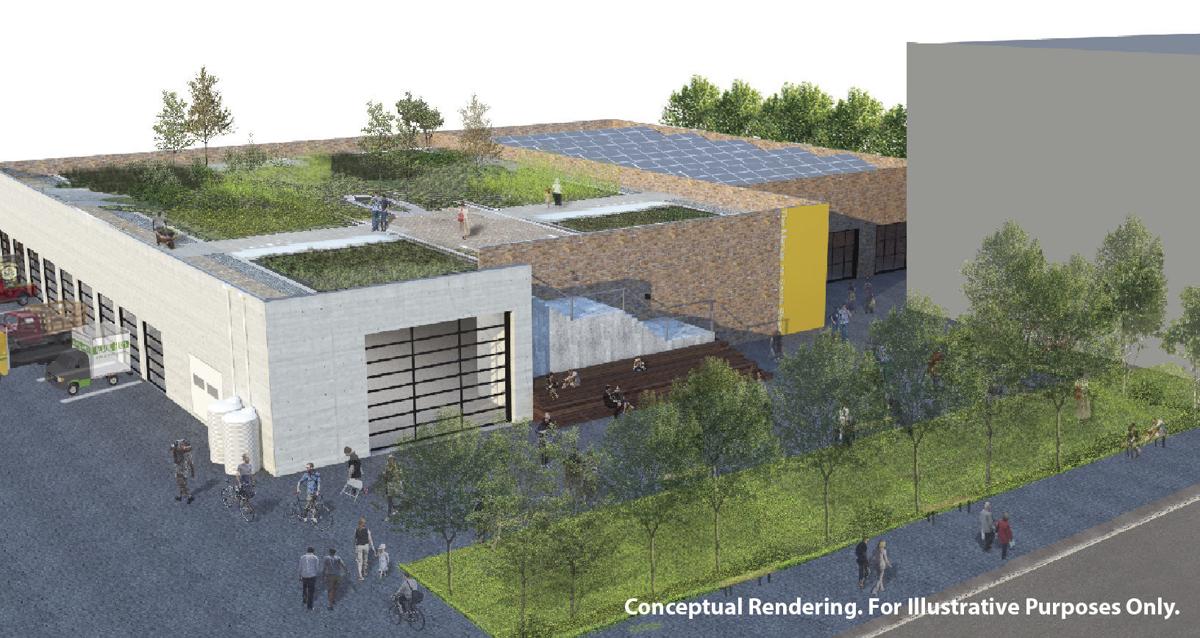 A conceptual sketch of the side and back of the proposed Market on South Street farmers market, event space and retail complex planned for South Street. The sketch is intended to illustrate the concept only and is not a final design. The state's Regional Economic Development Awards granted $1.5 million for a parking garage on South Street in conjunction with this project. 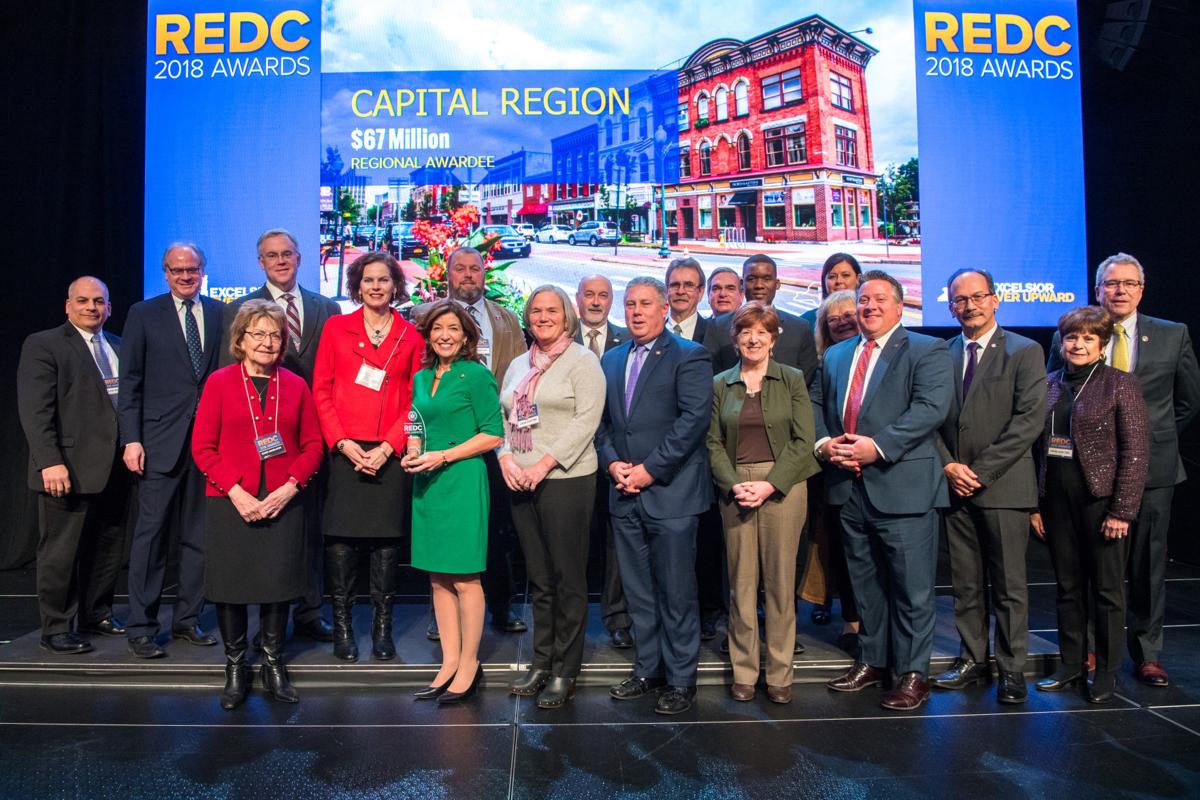 Elected officials from the Capital Region attend the announcement of the governor's Regional Economic Development Council funding on Tuesday in Albany at the Empire State Plaza. The Capital Region was awarded $67 million.

GLENS FALLS — Money to construct a new parking garage on South Street and a new hotel at Gore Mountain, and to clean up a demolished building in Whitehall, were part of $67 million in funding the Capital Region received from the governor’s Regional Economic Development Council.

A big-ticket item included $1.5 million for the construction of a 450- to 475-vehicle parking garage along South Street. The parking garage is part of the Downtown Revitalization Initiative project, which includes a new farmers market on the old OTB site at 51-57 South St.

The garage will provide parking for the market and tenants of the buildings being redeveloped along the street. The city plans to sell the former Hot Shots building at 45 South St. and the old garment factory at 36 Elm St. to private developers.

The city in 2016 was awarded nearly $10 million for the DRI initiative. About $5 million has been earmarked for the farmers market. The city also was awarded $750,000 in Restore New York funding, so this will help stretch the dollars further.

“What we’ve tried to do is assemble these various funds, so it gives us a little flexibility in putting these projects together,” said EDC Warren County President Edward Bartholomew.

Bartholomew said construction costs have increased with the rising costs of materials, such as steel, because of new tariffs. The added funding will help offset those costs.

The city’s consultant, LA Group, is in the process of designing exactly where the parking garage would go, Bartholomew said.

The state has also promised $800,000 to FrontStreet Development, which intends to construct a 40-unit hotel called Ski Bowl Mountain Inn next to Gore Mountain Ski Area.

The first phase of the project will include infrastructure, the main lodge and a 10-unit guest cottage, according to the report detailing the awards.

Bartholomew said David Crikelair of FrontStreet Development has been working on the project for a long time. It had received approval from the Adirondack Park Agency several years ago, but was delayed by a soft market for second homes and vacation rentals.

Lodging is very much needed in North Creek, Bartholomew said.

Glens Falls Mayor Dan Hall was pleased that Finch Paper was awarded $90,000 for a training program in management and leadership and financial planning and control.

In addition, the city received a $43,500 grant to work with the town of Queensbury on an inventory of greenhouse gas emissions, develop a climate action plan and an inventory of government vehicles and operations to become designated as a Climate Smart Community. The city’s Sustainability Committee will be working on the initiative.

“They’ll have an action plan they’ll put forward,” he said.

Washington County projects also got a boost. The complex cleanup of building debris remaining after the village of Whitehall’s former Flat Iron Building collapsed earlier this year will get underway with a $300,000 award.

Mayor Phil Smith said several factors make the clean-up costly, including having to treat the site as contaminated and a requirement that all materials must be transported to a certified landfill. The closest is in Buffalo, he said.

“The Department of Labor has strict guidelines, and we have to treat the material as contaminated,” Smith said, adding that when the building collapsed the EPA tested the site and there was no evidence of contamination. “Buildings of a certain age have to be treated as if contaminated.”

Smith said it’s likely the cleanup will take place next spring. Current plans are to build a parking lot in the space, he said.

The Northern Slate Valley Rail Trail in Granville will extend beyond Middle Granville with a $250,000 award, according to town Supervisor Matt Hicks.

“It’s been dead-ended for years in Middle Granville,” he said. “If we could get to Poultney (Vermont), the trail could go to Fair Haven (Vermont) and then to Whitehall.”

“It will be much more accurate,” said Miller on Tuesday afternoon, adding that the existing machine is manually operated and the new equipment is digital. “We are thrilled.”

Doty has been in business for more than 60 years, Miller said.

“We send pieces of machinery around the world,” she said, referring to a recent piece sent to Vietnam. “This keeps upstate New York manufacturing in the forefront.”

Washington County is set to receive nearly $600,000 to help conduct a countywide revaluation.

Some nonprofit organizations also got funding. Friends of the Washington County Grasslands received $63,000 to buy 64 acres of grassland in Argyle to protect endangered and threatened grassland birds.

Hubbard Hall is receiving $30,000 to produce a new play based on the life of suffragist Susan B. Anthony. Salem Art Works is receiving $25,000 to hire a youth programs coordinator.

HomeFront Development Corp. is getting $20,000 in funding to study reuse of three properties in the village of Cambridge.

Major projects in Saratoga County included $1 million to add facilities to expand educational and community programs at Saratoga Performing Arts Center and $200,000 for a marketing campaign to increase tourism to the area.

“You can’t win every single year,” he said.

HUDSON FALLS — The Regional Economic Development Council awards included plenty of good news for the village Tuesday — $1.475 million worth of…

New York State awarded $10 million to the city of Glens Falls as part of a Downtown Revitalization Initiative.

A multi-municipality, multi-organization effort to keep Schroon Lake free of new invasive species will continue after the state Regional Econo…

GLENS FALLS — The spotlight project for the city’s downtown revitalization initiative is plugging along, but the buildings on South Street are…

2020 State of the State address

This afternoon, Gov. Andrew Cuomo will deliver the 2020 State of the State from Albany. The event will begin at about 1:30 p.m.

A conceptual sketch of the side and back of the proposed Market on South Street farmers market, event space and retail complex planned for South Street. The sketch is intended to illustrate the concept only and is not a final design. The state's Regional Economic Development Awards granted $1.5 million for a parking garage on South Street in conjunction with this project.

Elected officials from the Capital Region attend the announcement of the governor's Regional Economic Development Council funding on Tuesday in Albany at the Empire State Plaza. The Capital Region was awarded $67 million.