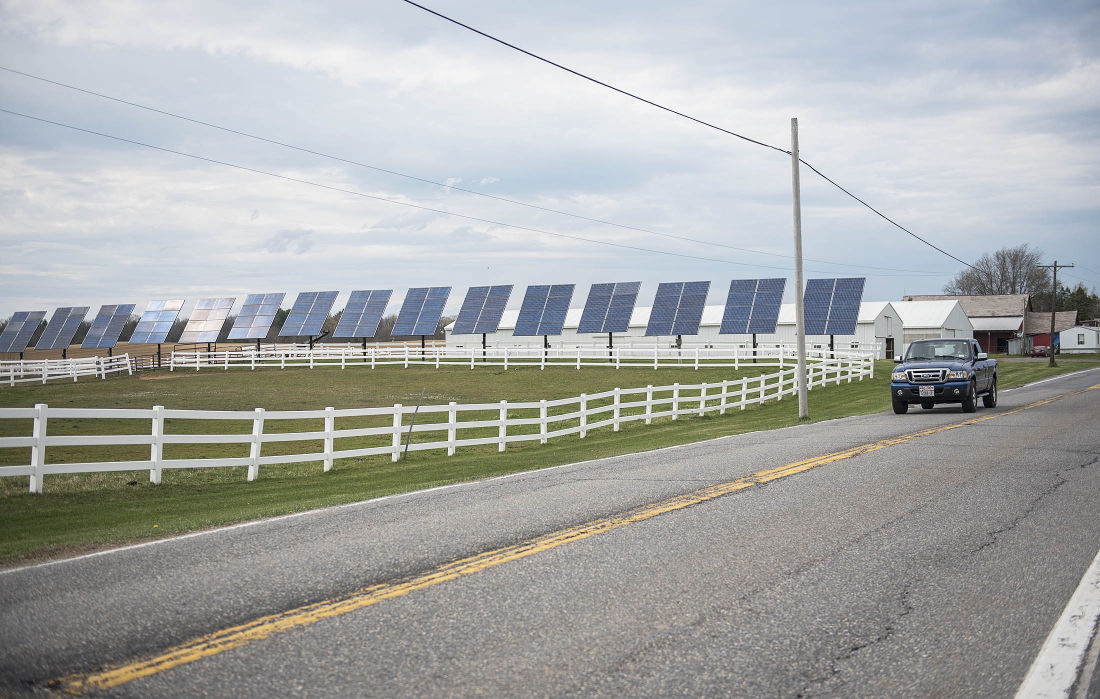 A truck drives past solar panels Friday at Barber Bros. Dairy Farm on Route 32 Friday in Schuylerville. Solar prospects have become a popular item in the region but a lack of regulations and term issues in contracts for leasing land for panel arrays have displeased many. 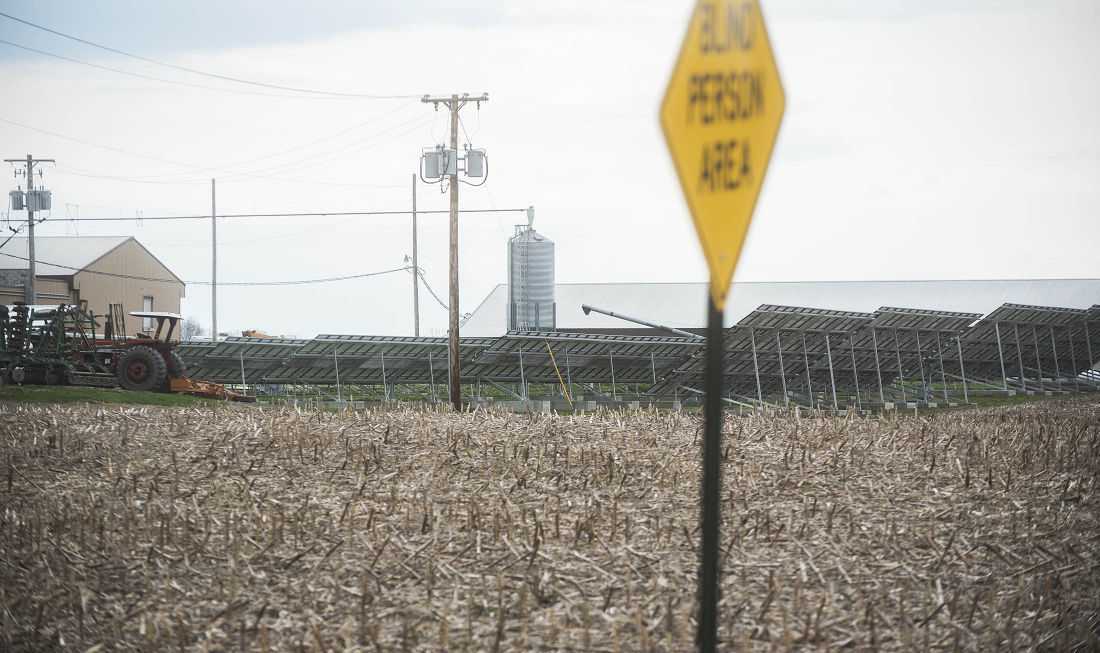 Solar panels are seen at the Thomas Poultry farm on Route 32 in Schuylerville. Rows of panels like this are being proposed on at least three agricultural parcels in Moreau, but none can be built yet. The Town Board is considering a law that would regulate them.

Solar energy is bringing a heap of problems to the region.

In just the last week, one municipality put a moratorium on large solar power arrays while another mediated between neighbors upset over a backyard array that blocked views. Then, after farmers were mass-mailed contracts for large solar arrays at unfavorable terms, state and local officials held an emergency meeting across five counties Thursday to warn farmers of tax pitfalls if they accept a lease for an array.

Solar panel arrays aren’t designed to bring power to the owner. Instead, panels are spread across 6 or more acres of land, with the power collected and sold to others. The land owner receives lease payments from the company that pays for and installs the array.

For now, it’s the wild west: Almost no rules govern solar panel arrays. That means they can be placed next to the street, or along a neighbor’s property line, when sheds and other structures must be set back a certain distance.

Generally, no zoning laws address solar arrays, which could prohibit them from certain locations, or require fences to keep children away.

And when the panels become obsolete, there aren’t any laws requiring the solar company to take down its panels rather than abandoning them.

Northumberland put on the brakes last week. The Town Board voted to put a moratorium on the arrays for the next eight months.

“I’ve watched a couple other towns that have had problems with freestanding arrays in people’s backyards. It became a neighbor issue — people don’t like looking at them,” said Northumberland Supervisor Bill Peck. “We haven’t had a problem yet.”

But problems in Moreau and other municipalities suggest that town officials should consider restrictions: setbacks, screening, and other rules, he said.

He also worries about the future.

“If the incentives went away and these companies disappear, 15 years from now we have all these broken solar panels sitting in a field,” he said.

He wants to explore requirements for a long-term bond that the company would put up to cover removal costs. State laws prohibit a planning board from requiring a performance bond for longer than three years, but the company could voluntarily agree to a longer term, according to the Department of State. Literature from the Land Use Law Center also said zoning could require a decommissioning bond.

Solar arrays became the talk of the region recently when farmers were blanketed with mass-mailed contracts offering $1,000 to $1,500 an acre if they would lease fields for solar panels.

But a two-hour presentation put together by state and local officials convinced most farmers not to rush into solar.

Attorney Fiona Farrell offered a devastating critique of one contract that had been mass-mailed to farmers. She said the contract was heavily one-sided.

“If they stop operating the system for any reason, they can unilaterally stop paying rent,” she said. “There’s nothing in the contract that guarantees they’ll assume the cost to restore the land so you can grow crops.”

But the biggest issue involved ownership of the land. The contract farmers received would put the solar company in first place regarding land ownership if the owner went into foreclosure or chose to sell. That means the company would get the land before a bank if the owner fell behind on mortgage payments.

Such a rule would stop banks from offering mortgages or loans with the land put up as a guarantee, she said.

The solar contract also gave the company the “right of first refusal” if the land were sold. That could put heirs into a bidding war against the solar company when the owner dies, she warned.

More than half of the farmers left at the end of her presentation, saying they were convinced to stay away from the solar array leases.

“Not doing that. As soon as that lawyer got up there,” said farmer Mike Stuart of Kingsbury.

Joe Cichacki, who rents his farmland in Schuylerville, liked the idea of leasing land to an array. But he didn’t like the loopholes that Farrell pointed out. He had hoped to get a better contract and called up the company that approached him, but he couldn’t get anyone to negotiate. His impression: “This is the contract, take it or leave it.”

His brother John Cichacki said that made the decision simple.

Then there are the tax implications. Peck said the arrays would be taxed higher, as commercial land, rather than farmland, and state officials warned that an array would be considered a conversion from farmland, which comes with a tax penalty as well.

Linda Barber of Barber Brothers Farm said farmers would be better off doing what she did: putting up solar panels for personal use, which does not come with tax increases. Her panels, near her horse barn, cover $1,500 of her monthly electrical bill and don’t take up any crop field space.

When she got a mass-mailed contract, she tossed it out.

“They had very nice maps, so I kept the maps,” she added. “But I can’t give up 20 acres of cropland. You know how much feed I’d have to buy?”

Even if she got $40,000 for the lease, she said that would only cover about three weeks of feed.

MOREAU — Two companies want to build solar farms in town, but the town has no regulations to allow them, or stop them.

A truck drives past solar panels Friday at Barber Bros. Dairy Farm on Route 32 Friday in Schuylerville. Solar prospects have become a popular item in the region but a lack of regulations and term issues in contracts for leasing land for panel arrays have displeased many.

Solar panels are seen at the Thomas Poultry farm on Route 32 in Schuylerville. Rows of panels like this are being proposed on at least three agricultural parcels in Moreau, but none can be built yet. The Town Board is considering a law that would regulate them.