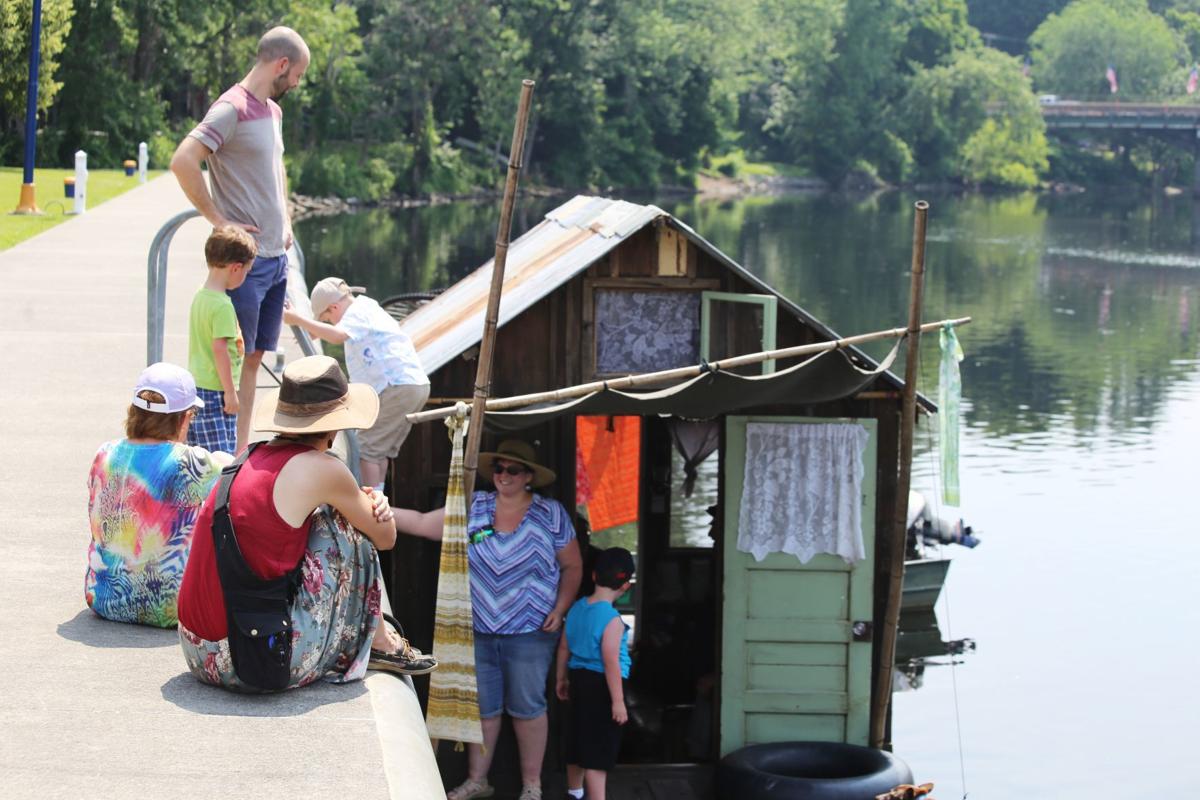 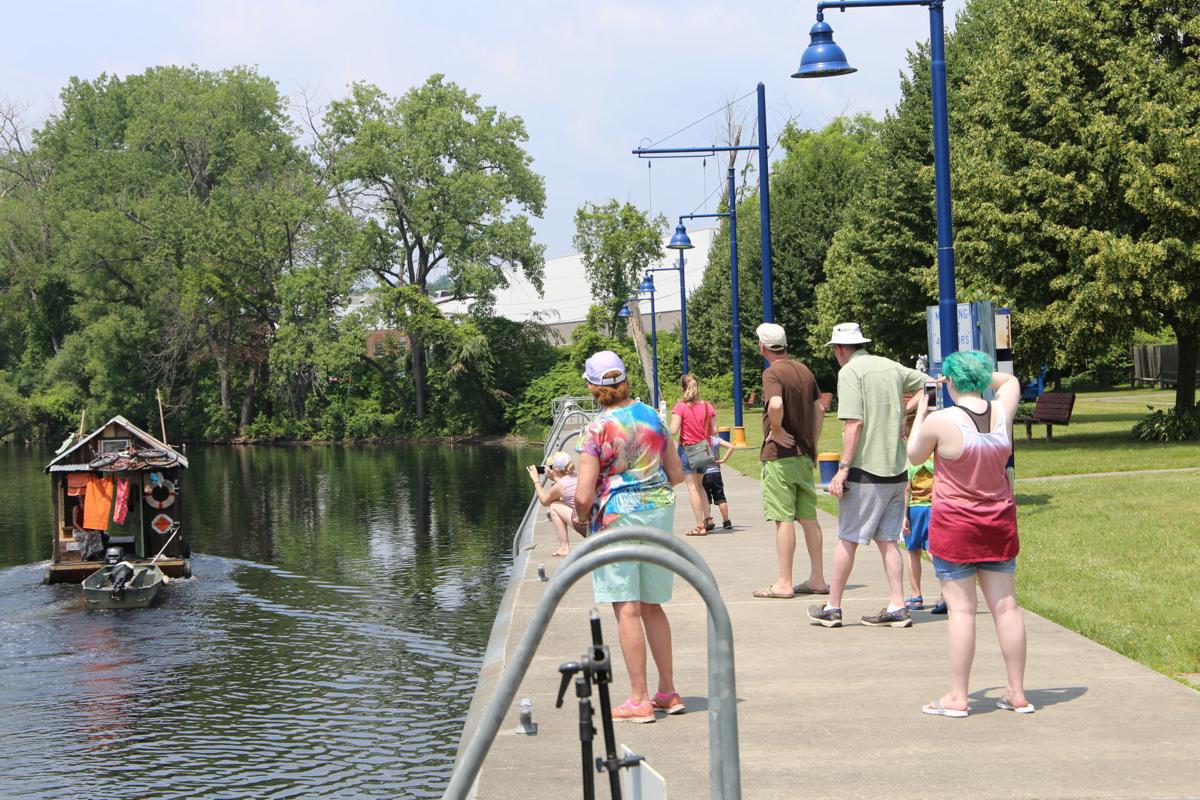 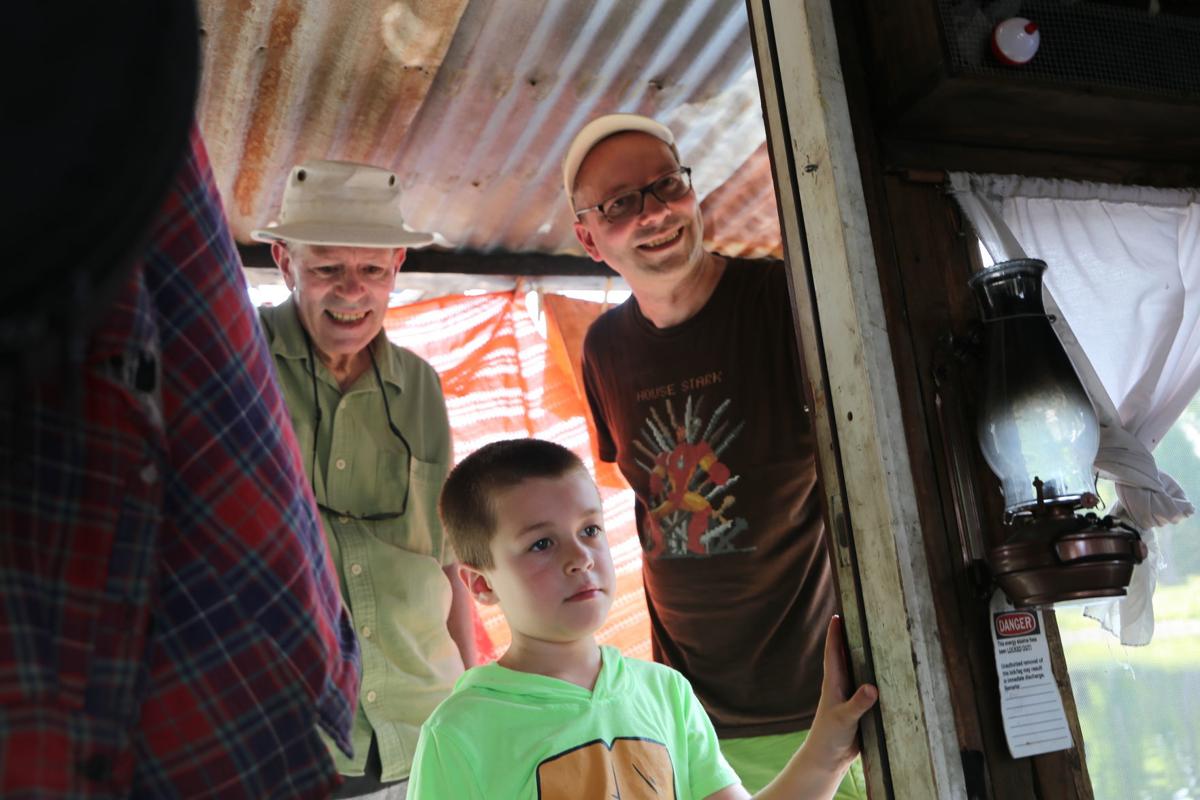 FORT EDWARD — It’s not every day that one might see a shantyboat floating down the Hudson River, but many people did Sunday around the Fort Edward Yacht Basin.

Wes Modes, shantyboat maker, artist, story collector and captain, opened his floating home to the public, helping kick off part of the World Awareness Children’s Museum exhibit, “Water, Water, Everywhere: Explore, Create, Investigate!” Traveling on his shantyboat is part of the California artist’s own project, too, called “A Secret History of American River People.” He collects stories from river communities around the country, and this is his first trip to the Hudson.

On his 20-foot-by-8-foot barge-bottom boat, Modes said he floated by the former General Electric Co. dewatering site, at the time not knowing what the vast vacant lot was. On a chalkboard propped up on his small kitchen table, an item on a checklist states, “post about GE PCBs,” a reference to the pollution GE dumped for years into the Hudson River.

.@WModes takes his shantyboat for a jaunt down the Hudson River. He’s here collecting histories and stories from river communities and is part of the @WorldKidsMuseum “Water Water Everywhere” exhibit pic.twitter.com/rx0bktgTUX

Modes is keeping a blog as he travels from place to place, and he plans to write a book someday. His first blog post about Fort Edward includes a short video of empty storefronts in the village.

“In the towns we’ve visited across America, the historic heart of small river towns are dying,” he wrote. “Or more accurately, they are being killed by the Walmartization of everything. We are currently in upstate New York in Fort Edward on the Hudson River, and this town is no exception.”

Modes is recording video interviews with people he meets along the river and collecting written stories on paper handouts he keeps on board. Besides the Hudson, he has traveled a “very slow” pace down the Mississippi, Tennessee and Sacramento rivers, and he kicked off his New York trip launching on the Champlain Canal in Whitehall.

He’s making his way to New York City next, where he’ll conclude the journey with an exhibit at WhiteBox, a nonprofit art gallery space.

But while Modes learned about the community he was in Sunday, people popping aboard his boat learned from him, too. He created the shanty, he told three generations of the DeFabio family, out of recycled and reclaimed materials. Bob, his son, Daniel, and 7-year-old grandson Alex DeFabio checked out the tiny bathroom, scoped out the living area and tried out a working telephone on the boat.

Alex DeFabio lifted open a chest just outside the interior of the boat, life jackets and supplies inside.

“That’s our hope chest, Alex. We hope we don’t have to use it,” Modes quipped.

Traveling by shanty was common in the late 19th century and first part of the 20th, Modes said.

“It was like, get a couple of planks salvaged and throw together a boat. It’s not hard,” he continued.

Modes’ shantyboat might be a bit more fancy than the raft-like structures some people used in the past, but he’s had over five years to work on it, adding vintage books, signs and other items to transport guests back to a forgotten time.

To follow Modes and learn more about his project, visit peoplesriverhistory.us.

COST: $5 admission. Free for children under 3.

Visit poststar.com/gallery or scan the QR code on page A2 to see more photos from Modes' visit to Hudson Falls.

Emergency personnel are looking for a man who was reported missing in the water in Lake George.

The state Department of Motor Vehicles has given the green light to driving schools to conduct distance learning pre-licensing courses online.

Warren County Health Services has another mystery on its hands. A resident caught the virus somewhere in Warren or Saratoga counties.

A Lake George woman was seriously injured in a motorcycle crash early Monday morning, closing northbound lanes of the Northway for several hours.

An assisted-living facility resident has died after being hospitalized in critical condition, in the first COVID death of a Warren County resident since May 30.

For bowling alleys, time is running out

Dozens of bowling alley owners gathered at Kingpin's Alley Family Fun Center in South Glens Falls to call on the state to issue reopening guidelines for the 300 bowling alleys across New York.

Three people were arrested following an investigation into stolen property in Hoosick Falls.

The body of a swimmer who went missing late Saturday night was recovered Monday morning in the Hudson River, according to State Police.

A huge Adirondack estate owned for generations by the Whitney family has been put up for sale by John Hendrickson, widowed husband of the late Marylou Whitney.