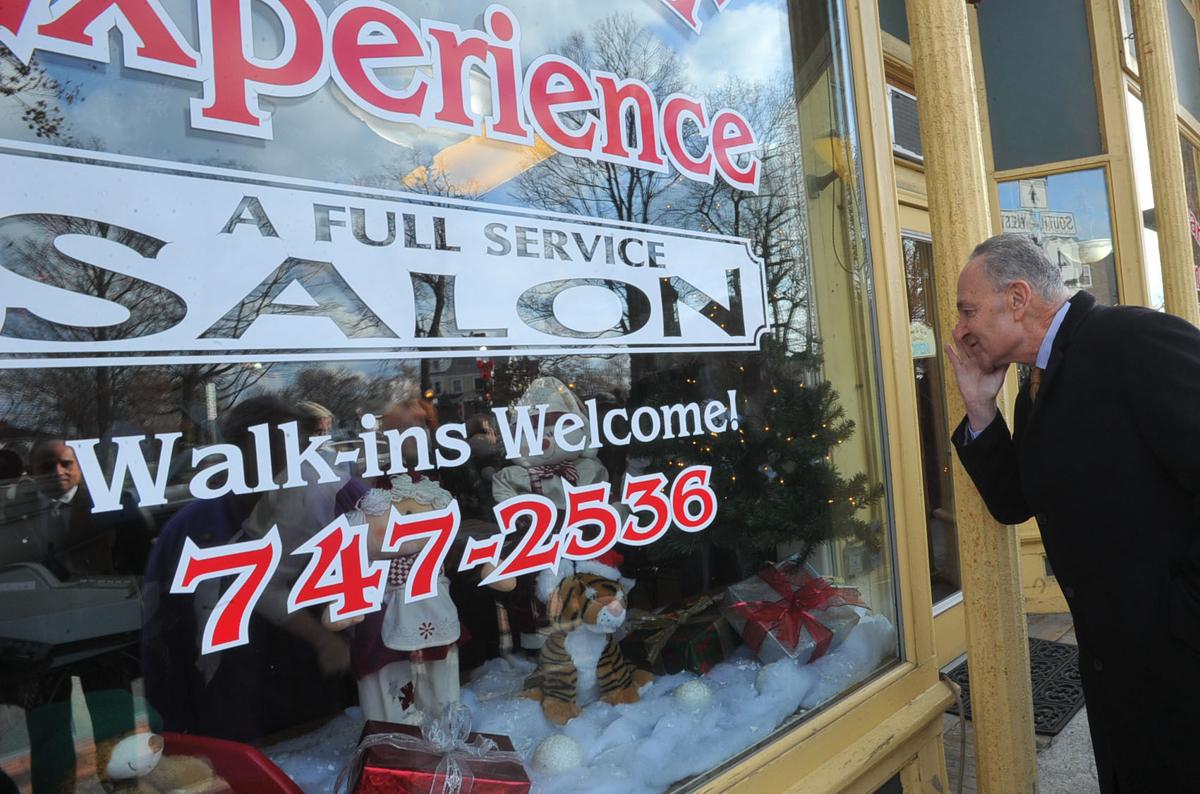 U.S. Sen. Charles Schumer speaks through the window to Joy White of A Shear Experience on Friday morning during the senator's tour of Hudson Falls. 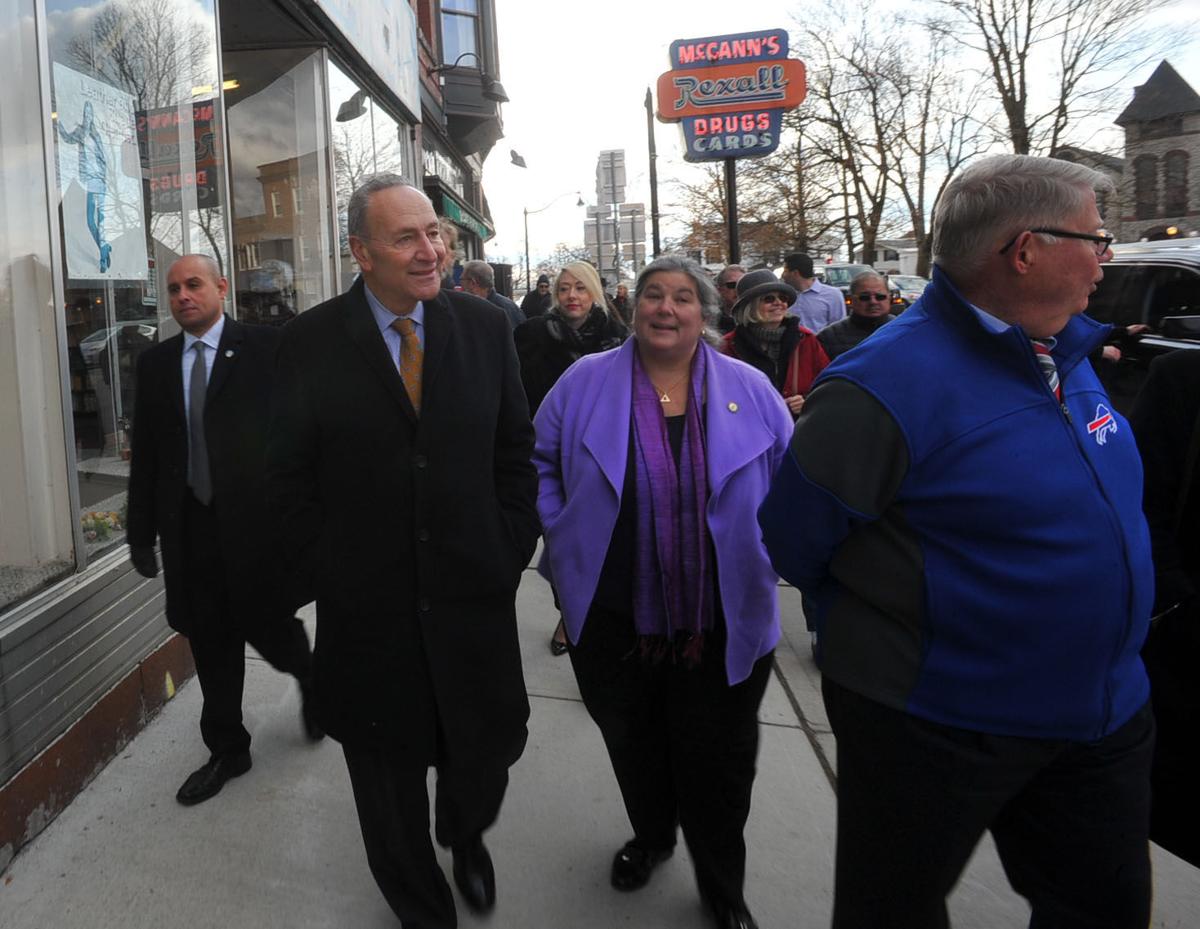 U.S. Sen. Charles Schumer walks along Main Street in Hudson Falls with Assemblywoman Carrier Woerner, D-Round Lake, during a stop to the village on Friday morning. 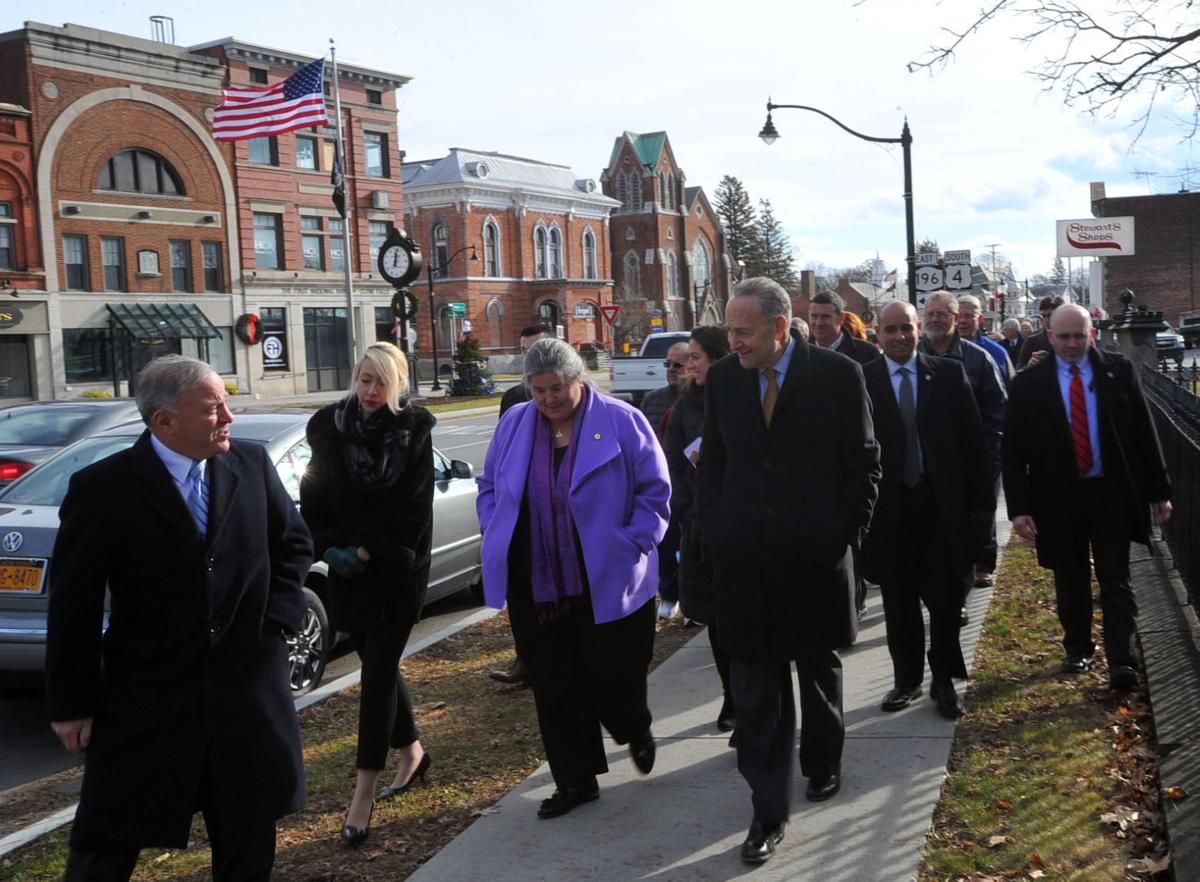 "If I had to pick a word to describe my little visit to downtown Hudson Falls, it would be 'inspired,'" Schumer said, as he stood center stage at the Strand Theatre, one of six historic buildings he visited during an hour-long tour.

For example, Trump's budget would cut $20 million from The National Heritage Areas program, which is a state and federal partnership to preserve natural, historic, scenic and cultural resources.

Schumer is fighting to keep the funding.

“You can just feel the revitalization in the air," he said of Hudson Falls. "To take these old buildings and give them new life and new purpose is great,” he said as he walked through the park, trailed by a group of nearly 30 people.

All of the buildings were built in the late 1800s or early 1900s, and he called all of them beautiful.

He also opened doors of local businesses like A Shear Experience and Crafted on the Park to ask how business was doing.

"I said 'fantastic,'" said Tammy Mullen, owner of Crafted on the Park, which opened last week.

"He said his parents were small business owners so he wished us luck," she said.

"The word inspiring was important to me because we've been trying to inspire this community for years," Timms said at the end of the tour.

"We have brought growth to this community and we've all been inspired," she said.

Schumer is also a supporter of the craft beer industry, and a new brewery will be going into the former bank building by next year.

“In the new tax bill, there’s a tax break for your kind. We like our breweries,” Schumer said to Drake Hewitt of Hudson River Taste & Brew.

Schumer wants to add New York to a list of states eligible for a special federal crop insurance program for farmers who grow malt barley, which, he said, will encourage more malt barley farmers.

Friday's visit was part of Schumer's goal of visiting each of New York's 62 counties this year.

"You have done an amazing job ... now people will think Hudson Falls has its best years ahead of it," Schumer said to the group.

"He's a real advocate for communities like us," Cook said. "His time here was invaluable to us."

BLOG: Hudson Falls appears to be on the right track

Small clothing and craft shops, salons, restaurants, breweries and revitalized entertainment venues are all in the future.

Looking back at local history: Dec. 9

Take a look back at local history. Here are the top stories for Dec. 9 from one, five and 10 years ago.

On Friday, U.S. Sen. Charles Schumer visited Hudson Falls as part of his 62 county-by-county tour of New York. Schumer checked out the Strand …

U.S. Sen. Charles Schumer speaks through the window to Joy White of A Shear Experience on Friday morning during the senator's tour of Hudson Falls.

U.S. Sen. Charles Schumer walks along Main Street in Hudson Falls with Assemblywoman Carrier Woerner, D-Round Lake, during a stop to the village on Friday morning.