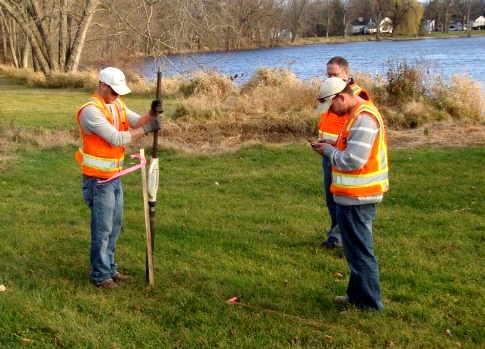 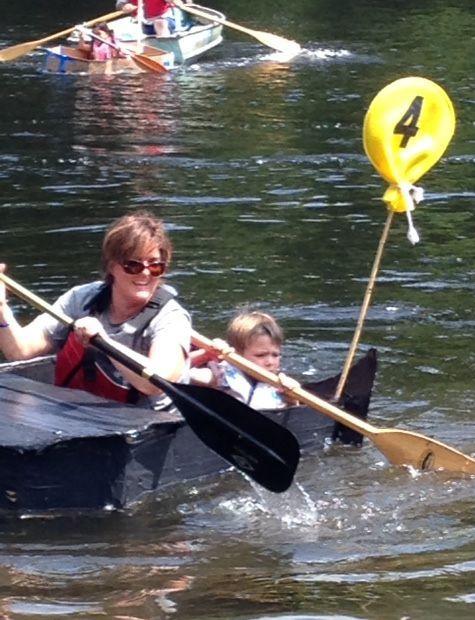 CAG member Julie Stokes is worried that the cardboard boats from the annual race in Schuylerville may be contaminated with PCBs. This boat was built and paddled by her daughter and 5-year-old grandson. They carefully stored it at Stokes' house and intended to use it as a sled this winter.

SARATOGA — It is becoming all too clear that dredging was just the start of removing PCBs.

The toxic chemical has now been found in dangerous quantities in 66 local backyards and recreation areas, with more being discovered as the EPA tests the dirt near the Hudson River banks, Environmental Protection Agency officials said at a meeting Thursday with the Community Action Group.

On the both sides of the river, PCBs stretch through 5,500 acres of land, primarily privately owned, EPA officials told CAG members.

CAG has met for quarterly updates on the PCB cleanup for years.

General Electric was required to remove PCBs from the Hudson River over the last decade. The company polluted the river from the 1940s to the 1970s and removed 2.75 million cubic yards of contaminated sediment in the cleanup.

Now CAG is focusing on the riverbanks, which the General Electric Co. has agreed to test but has not yet agreed to clean up. It’s expected to be the next big fight between GE and the EPA.

While dredging focused on the PCB levels in fish, which are still not safe to eat, the new project considers children.

“What we’re talking about is when the water goes out and you can walk in there, get mud on you, and bring it out with you,” said EPA Project Director Gary Klawinski.

“I think the Department of Health would say you should wash that mud off your feet before you go inside,” he added. “But if you put a picnic blanket down and you have the potential to ingest that mud — that’s a very different thing.”

They are studying the concentration of PCBs in various areas to determine how safe (or unsafe) it is for people to play on contaminated soil.

The testing runs from the wet riverbank area through the dry backyard areas that are often briefly flooded by river water.

“We added this, what we call the wedge, or exposed areas, precisely because we wanted to make sure we’re not missing anything,” Klawinski said.

The discussion left CAG members worried — particularly about the annual cardboard boat races in Schuylerville, which EPA officials have previously said were safe.

CAG member Julie Stokes described how her 5-year-old grandson helped build and race a cardboard boat last summer. She made him shower afterward, thinking of PCBs in the river water, but now she wonders if the boat got contaminated from the mud on the riverbank.

“He dragged it across the river, through the mud, it’s now in the attic of my garage and he’s planning on sledding in it this winter,” Stokes said. “Do I have PCBs on that cardboard boat?”

But they said they’ve found PCBs in the Schuylerville area, including in the water and sediment of the Old Champlain Canal.

The canal flooded and covered much of the ballfields near there, and the EPA is now planning to study the dirt in those fields before winter.

Stokes offered to provide photos that show how far the water spread during the flood, which Klawinski enthusiastically accepted.

For now, children continue to play there. Stokes isn’t going to throw out her grandson’s boat, either. She’ll let him sled when he visits from Denver this winter.

“I’ll let him do it, and then have him come in and take a shower,” she said.

But the reports left her shaken.

“A lot of these kids took their boats home,” she said.

Take a look back at the history of dredging in the Upper Hudson River.

Looking back at local history: Nov. 17

Take a look back at local history. Here are the top stories for Nov. 17 from one, five and 10 years ago.

CAG member Julie Stokes is worried that the cardboard boats from the annual race in Schuylerville may be contaminated with PCBs. This boat was built and paddled by her daughter and 5-year-old grandson. They carefully stored it at Stokes' house and intended to use it as a sled this winter.