You have run out of free articles. You can support our newsroom by joining at our lowest rate!
Already a subscriber?
Log in or Activate your account.
Loading&hellp
No thanks, return to homepage.
{{featured_button_text}}
1 of 7 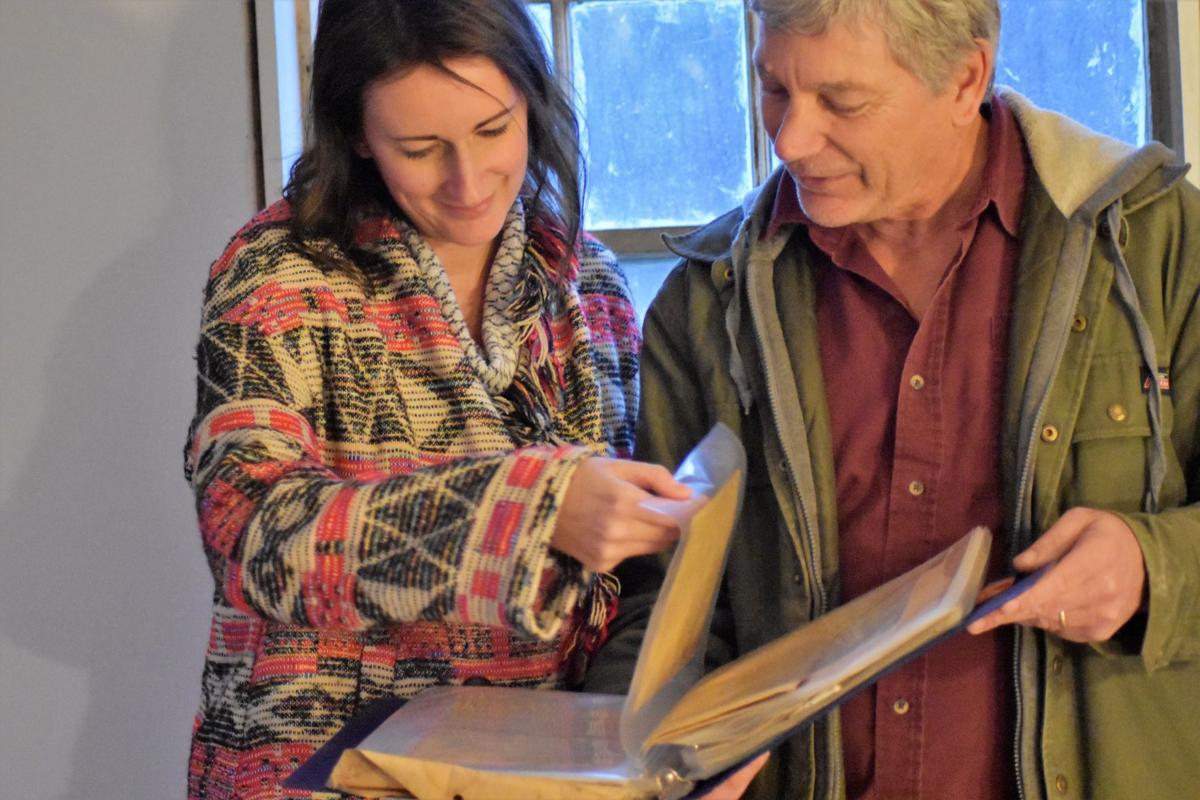 Jill Tefft and her father Rick Tefft look at all the images and ephemera collected during the clean-up of an old school house in Greenwich. 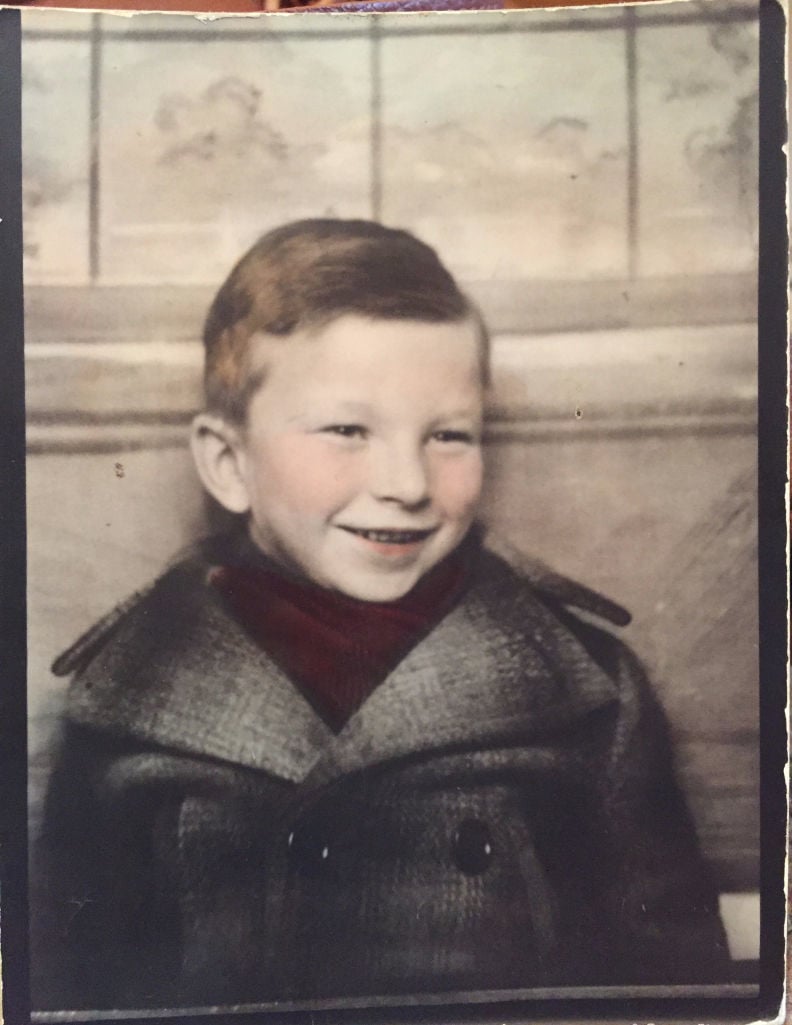 Richard Tefft Sr. went to the school on Ryan Road in Greenwich. 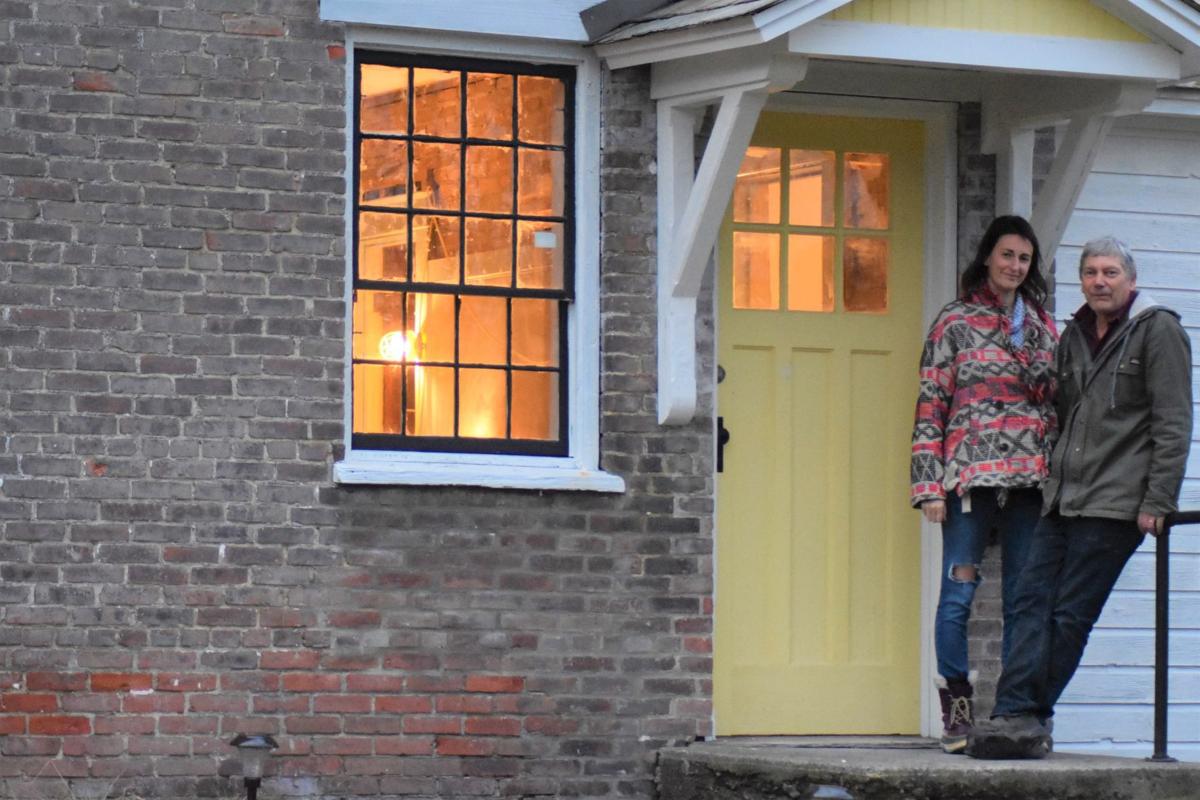 After two years, Gramps Old School is almost completed. Jill Tefft and her father Rick Tefft resurrected the 1850 one-room school house that will soon become an AirBnB in Greenwich. 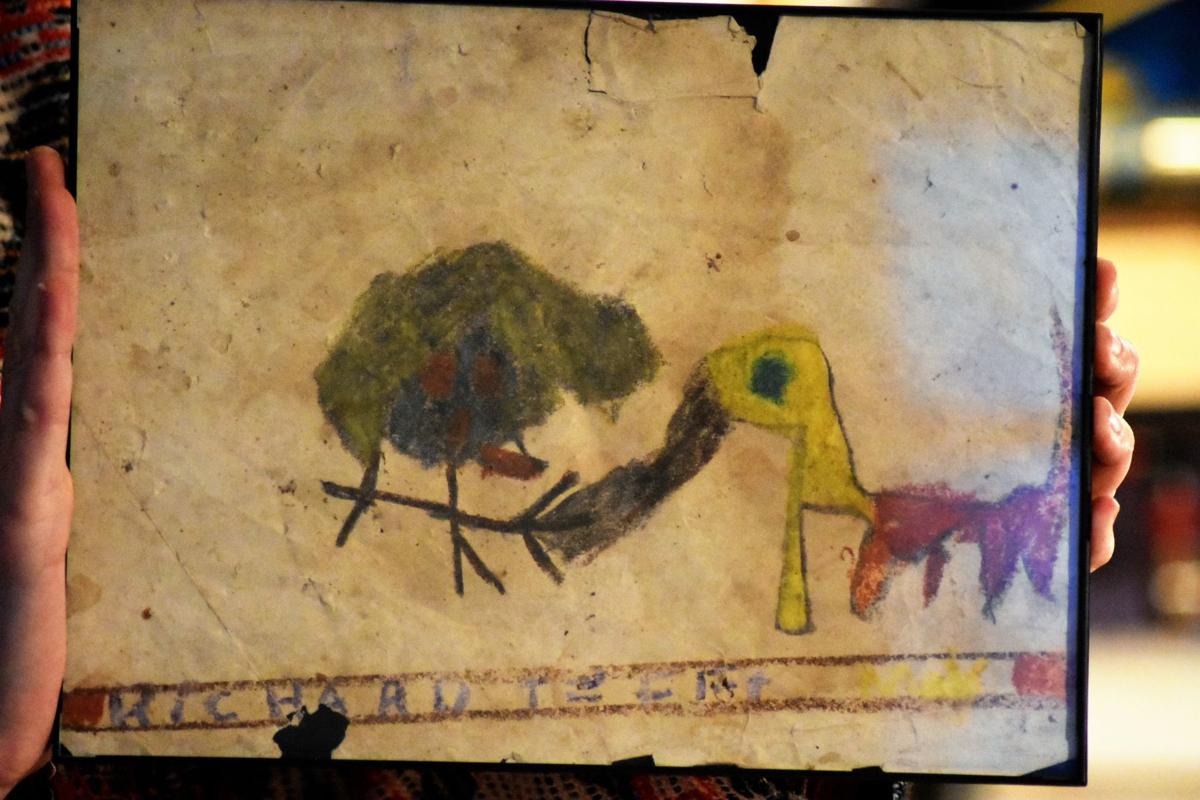 Richard Tefft Sr., childhood drawing unearthed in the debris of the one-room school house his son and granddaughter restored. 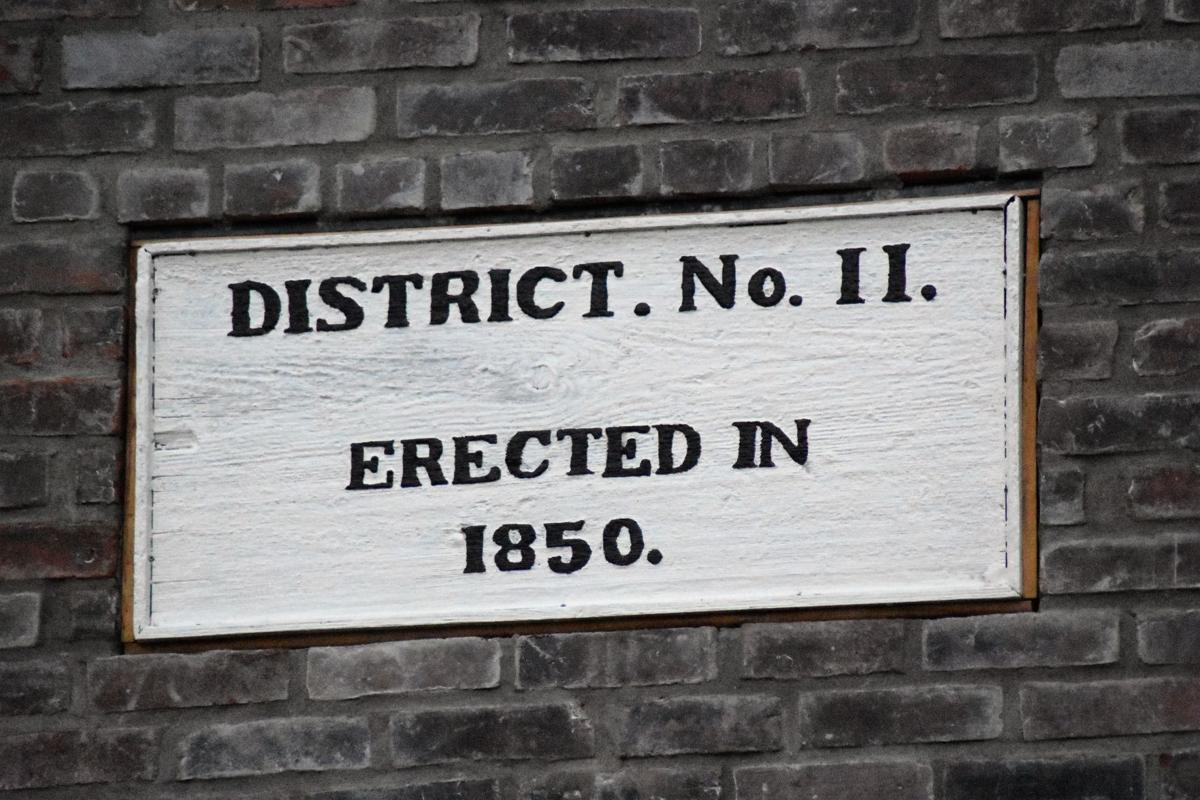 The original school house sign is incorporated into the newly pointed brick facade. 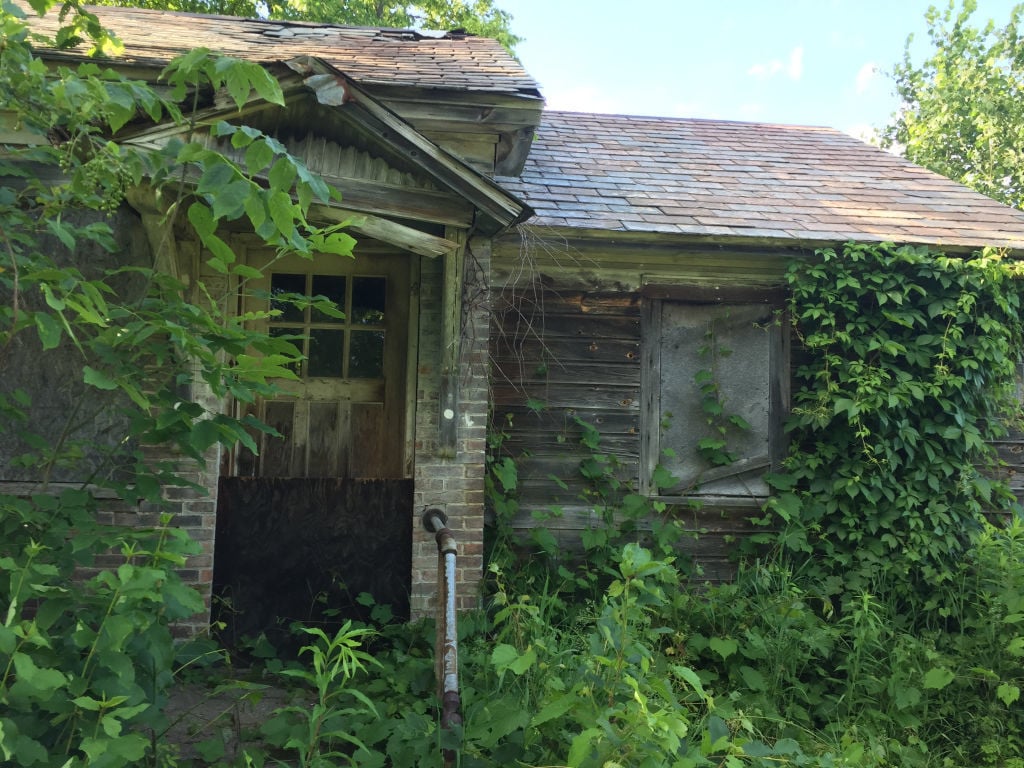 The school house before restoration. 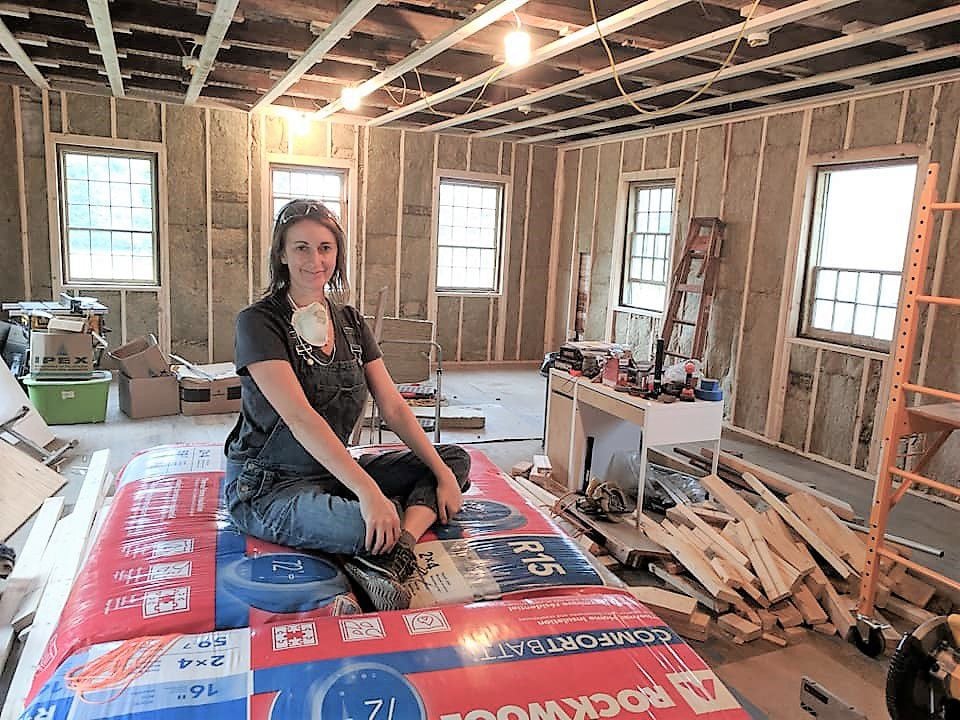 GREENWICH — The old school house is nestled on a small hill, just off Route 29 on Ryan Road in Greenwich. And at dusk on Friday, amber rays cast splashes of color across the centuries-old structure that overlooks deer-filled fields and Sugar Mill Farm.

And when Jill Tefft and her father, Rick Tefft, decided to buy the rundown and overgrown one-room schoolhouse, they had no idea how closely related they were to the 1850 brick structure.

“I grew up across the street,” said Jill on Friday afternoon while at the school house. “I would ride the school bus past this everyday.”

Still, it wasn’t until their first day of shoveling up nearly sixinches of debris and student papers that they spotted a brightly-colored creation.

It was a crayoned drawing of two primitive creatures, maybe a bird and a dog, signed by the late Richard Tefft, Rick Tefft’s father, Jill’s grandfather, that caught their eye.

“After that, the cleanup took much longer,” said Rick. “We checked every piece of paper.”

“We’re going to work her name into something,” they said, laughing.

“It was like they just closed the door in 1940,” Jill said, adding that with the exception of some vandalism, things were just as the school left them all those years ago.

The Teffts purchased the school together in the hopes of preserving its history and to eventually transform it into an Airbnb for visitors to the area.

“It’s always a challenge to find somewhere to stay,” said Jill, who used to visit her parents on Ryan Road while working and living in North Carolina. “At first I thought maybe we could live in it, but my husband said it was too small.”

In the 1930s, the school was nearly torn down, they said.

“It did not meet 1930’s standards,” said Jill, explaining that the school was upgraded by moving the entry door to the side, a room was added to accommodate chemical toilets, and they added a playground in that era.

When they first went to see their 800 square foot purchase, the Teffts had to cut their way through to the door because it was so overgrown. There was a hole in the roof and a hole in the floor, although there is no evidence of that today.

After removing multiple dumpster loads of debris, they had to deal with no well, no septic, no electricity.

And it wasn’t until this spring and summer that the demolition and cleaning was completed, the well dug and the septic installed.

Because the school is on track to receive a National Historic Register distinction, the Teffts had to maintain its historic exterior.

There were 28 rows of bricks that were actually taken down, palletized and then put back up in their original position to correct a large crack that had developed, causing the entire gable wall to tip in, Jill said.

Fourteen original windows were repaired to maintain all the original sashing, and that meant sending some off to a New England artisan to remake them and searching for others in vintage shops.

They added a well and septic system, completely rewired everything, added insulation, added a kitchenette, bedroom and bath and lofted the bedroom.

And now, after two years of extensive restoration work, the old school is almost ready for its first guests.

“We are hoping to have it open in January,” said Jill. “We’ve had a lot of support from the area and people keep stopping by to see what we are up to.”

And already, like many bitten by the restoration bug, they are talking about maybe doing it again.

“We better finish this first though,” they said laughing.

The restoration of an 1850 Greenwich school house is about completed and will open in early 2020 for Airbnb guests.

For more information about the project:

Pyramid, which owns Aviation Mall, issued a statement saying that if HVAC systems spread coronavirus, it can't be worse in a mall than in a large store.

The plan to offer a concert with fireworks on July 3 at West Mountain has been scrapped.

An unknown number of people who work at a local slate quarry have tested positive for coronavirus, but they may not know it yet.

Jill Tefft and her father Rick Tefft look at all the images and ephemera collected during the clean-up of an old school house in Greenwich.

Richard Tefft Sr. went to the school on Ryan Road in Greenwich.

After two years, Gramps Old School is almost completed. Jill Tefft and her father Rick Tefft resurrected the 1850 one-room school house that will soon become an AirBnB in Greenwich.

Richard Tefft Sr., childhood drawing unearthed in the debris of the one-room school house his son and granddaughter restored.

The original school house sign is incorporated into the newly pointed brick facade.

The school house before restoration.