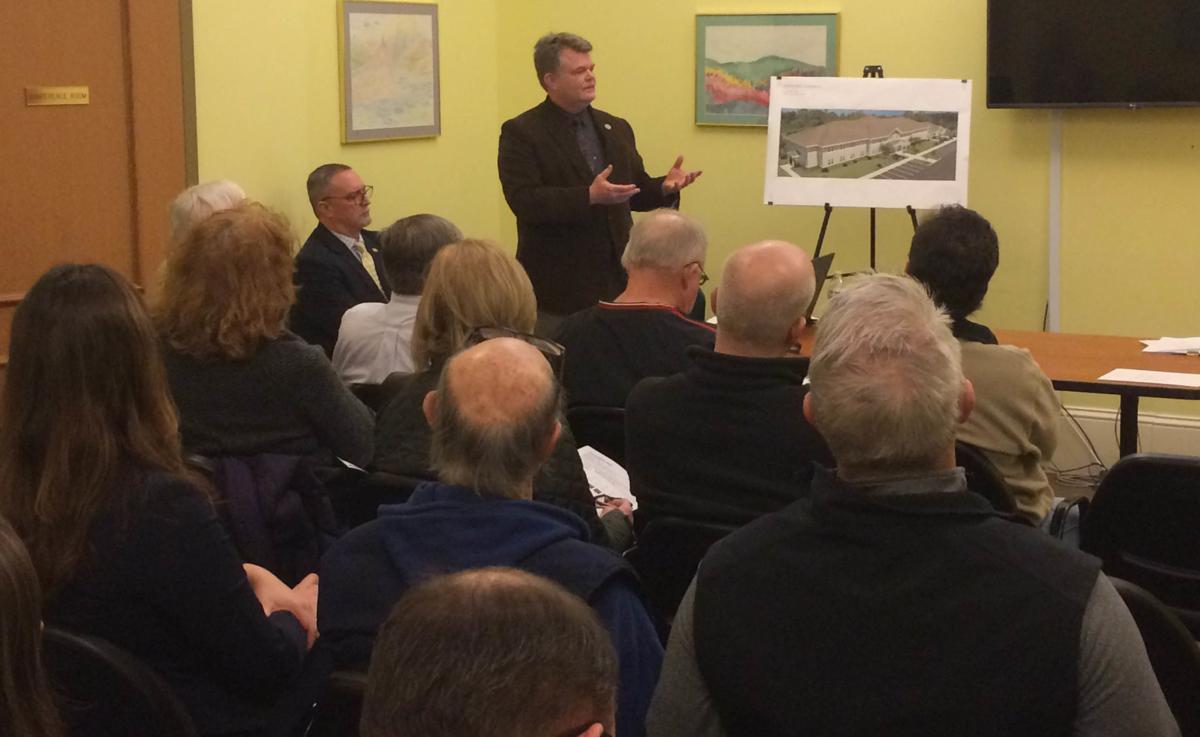 John Farrell, director of facilities for the Warren-Washington Association for Mental Health, talks about the organization's proposal to build a 29-unit affordable housing building at 47-50 Cooper St., Glens Falls, during a community meeting Wednesday evening.

Seen here is a rendering of a proposed 29-unit apartment complex on Cooper Street, Glens Falls, which would be built for mentally ill and homeless people. The Warren-Washington Association for Mental Health hopes to break ground on the project this summer. 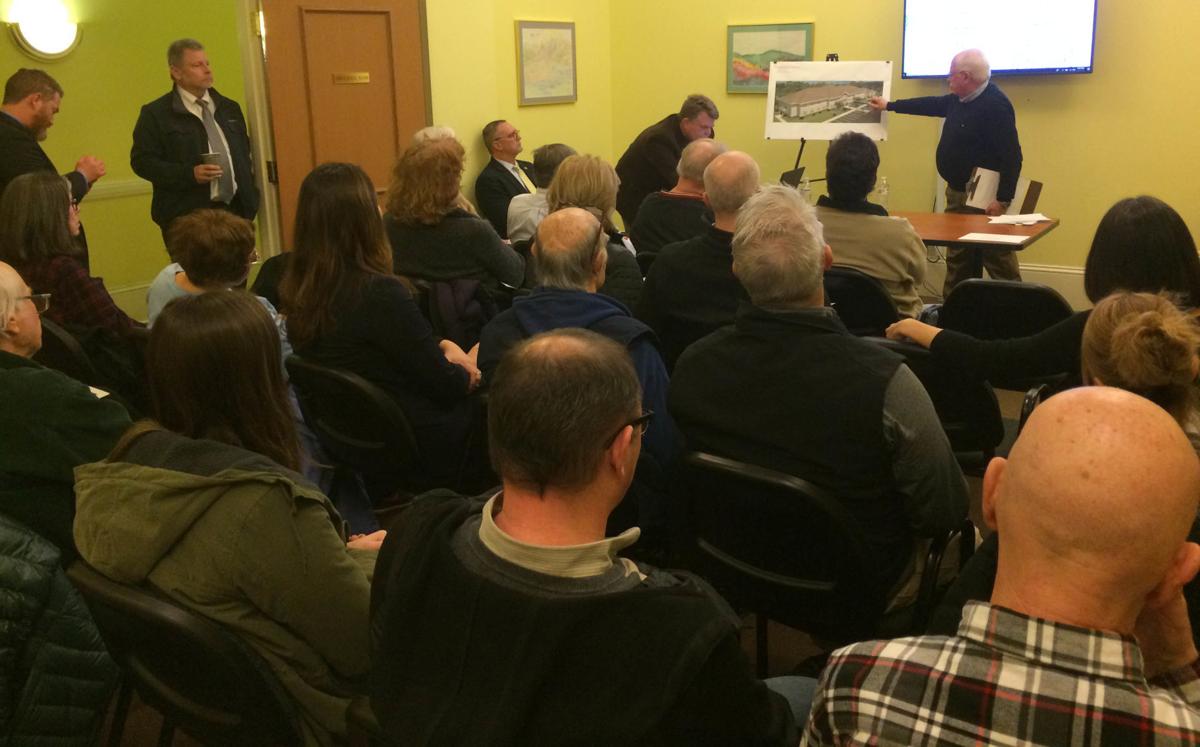 Architect Owen Nitzel points to the rendering of the Warren-Washington Association for Mental Health's proposed 29-unit apartment complex at 47-50 Cooper St., Glens Falls, during a community meeting on Wednesday evening.

GLENS FALLS — Residents of Ward 1 turned out in force Wednesday at a community meeting to express their vehement opposition to the Warren-Washington Association for Mental Health’s project to construct a 29-unit apartment building for the homeless.

Among the concerns from the 40 people in attendance were that there are too many social services organizations in that section of Glens Falls and that the property would not generate much tax revenue for the city — even if the organization does a payment-in-lieu-of-taxes agreement.

Ward 1 Supervisor Jack Diamond urged officials from the Association for Mental Health to take an offer to buy the property.

“If you want to be a good neighbor, you’d be open and willing to accept this proposal,” he said.

Elizabeth Miller, owner of Miller Mechanical Services, said Wednesday that she had offered to buy the land at 47-50 Cooper St.

“We might have to expand outside the city because we don’t have any place to expand,” Miller said during a conversation with a reporter at the meeting.

She said the Association for Mental Health declined her offer.

Diamond said after the meeting, he preferred that the property be used for an industrial use.

John Farrell, director of facilities for the Association for Mental Health, said agency officials went through a lengthy process to find this site, which once housed Mullen Iron Works but has been vacant land since the industrial building was demolished in 2013.

First, the organization looked across the street from its current facility at 230 Maple St. to a vacant piece of property at 222 Maple St. However, the lot size was too small and would have required variances to make this project fit, Farrell said.

The organization also looked at a vacant 1.5-acre site next to Glens Falls Hospital, but the hospital wanted $750,000 and that was too much, according to Farrell. It also briefly considered a site off Broad Street where a 72-unit housing complex is planned.

Association officials also looked at sites in West Glens Falls and Queensbury, but they wanted to be closer to the core of the city, Farrell said.

The current site on Cooper Street requires no variances. However, architect Owen Nitzel said the organization does not need 47 parking spaces. It would like to see that cut to 35. Engineer Tom Jarrett said another variance may be sought to push the building closer to Cooper Street and away from the backyards of homes along Leonard Street.

Farrell said there is a tremendous need in the community, with about 600 people in need of low-income housing — about 70-plus families.

There would be 14 of the 29 units set aside for people dealing with mental illness. There would be four set aside for survivors of domestic violence, six for the chronic homeless and four family units. One unit will be set aside as a transitional unit for a short-term stay.

This project would make a small dent in the homeless problem, according to Farrell.

“There’s still going to be an issue,” he said.

The biggest issue residents had was about another nonprofit agency moving into the area.

Resident Nancy Underwood, who is running against Diamond for Ward 1 supervisor, said she counted almost 14 service providers and three schools in Ward 1. All are tax-exempt.

“Why, again, are we choosing the same location that is totally saturated with the city services?” she said.

Ward 2 Supervisor Peter McDevitt said Glens Falls has become the home of nonprofits and the city has a limited tax base.

“Property taxes are high in the city of Glens Falls. I don’t know if any resident in this city has gotten a recent water bill. It’s enough to make you choke,” he said.

McDevitt suggested that the organization pay full taxes on the property. Farrell, however, said the Association for Mental Health cannot afford that.

The Association for Mental Health has offered to do a payment-in-lieu-of-taxes plan. Farrell said officials are still discussing the matter, but suggested it might be $5,000 annually, which is about what the vacant lot pays in taxes now.

That did not sit well with some of the attendees, who said the amount is much less than what would be paid if the lot, with a building, was on the tax rolls.

Resident Philip Underwood said Glens Falls cannot handle any more tax-exempt properties, which make up about a fourth of the properties in the city.

“Our city council should do whatever it takes to stop this,” he said.

Councilwoman-at-Large Jane Reid pointed out that there is only so much the city can do. The Association for Mental Health purchased the property at fair market price. Reid said the Planning Board has to follow the city guidelines if the project meets the code and criteria.

“They can’t just reject a project because of the nature of the project,” she said.

Reid added that she is grateful the organization has even discussed making a payment to the city.

“That is the first time we have ever had anyone do that,” she said.

Some at the meeting also worried about the residents who have mental illness and whether that would cause disruption.

Farrell said that in the vast majority of cases, the people with mental illness who are in need of this housing are the victims rather than the perpetrators of violence. Sometimes they lack coping skills and their frustration may result in anger, he said.

“That really can turn off a landlord, turn off a neighbor and cause a problem that causes people to be evicted,” Farrell said.

Farrell pointed out that there are people with mental health issues living in the community already. The benefit of this facility would be the on-site support services provided, including staff to help residents when they are having difficulties. There will be staff present 24 hours a day, seven days a week, he said.

No sex offenders would be living in the complex, according to Farrell.

The goal is to transition people into permanent housing, but Farrell said they do not rush people to that point if they are not ready.

The only person who spoke in favor of the project was Paul Hancock of the local chapter of the Democratic Socialists of America. He said there is a dire need for this type of housing. Market-rate housing in the city has driven up rents and gentrified neighborhoods, Hancock added.

The next step is for the project to go before the Planning Board for a discussion on April 2. Based upon the feedback, the engineer and architect will make some revisions to the plan.

Farrell said it is normal to have some pushback, but he believes the majority of things people are concerned about do not come to pass.

The organization wants to go ahead with the project, Farrell said.

“Is it a done deal? No. We haven’t dotted every i and crossed every t. It is the direction we’d like to go in,” he said.

Efforts to drag the Warren County Board of Supervisors into the controversy over a homeless housing project were unsuccessful Friday.

John Farrell, director of facilities for the Warren-Washington Association for Mental Health, talks about the organization's proposal to build a 29-unit affordable housing building at 47-50 Cooper St., Glens Falls, during a community meeting Wednesday evening.

Seen here is a rendering of a proposed 29-unit apartment complex on Cooper Street, Glens Falls, which would be built for mentally ill and homeless people. The Warren-Washington Association for Mental Health hopes to break ground on the project this summer.

Architect Owen Nitzel points to the rendering of the Warren-Washington Association for Mental Health's proposed 29-unit apartment complex at 47-50 Cooper St., Glens Falls, during a community meeting on Wednesday evening.