GREENWICH — The 10th annual Holiday Lighted Tractor Parade rolled through the village streets of Greenwich on Saturday evening, with a record number of entries and crowds packed along the route.

“I thought last year would be hard to beat,” when the parade returned after the 2020 pandemic cancellation, “but we surpassed it in every way,” said Kelly Eustis, managing director of the Greater Greenwich Chamber of Commerce, the event’s organizer.

Tractors and farm equipment festooned with lights and decorations lined up in Greenwich High School’s parking area before the parade’s 6 p.m. kickoff. As dusk fell, the grounds became a multi-colored fairyland inhabited by elves, bees, bagpipers, Whos, snowmen, an elk, Santa, and adults trying to corral excited children. Even Batman put in an appearance.

“Elks are involved in the community, and this is such a wonderful community event. We wanted to take part in it,” Lloyd said.

Capital Tractor donated a tractor for the evening and Bill Briggs loaned his hay wagon, Lloyd said. Lodge members spent about six hours Thursday evening “decorating and drinking hot cocoa. We had a great time,” Lloyd said. Children on the decorated wagon were participants in the lodge’s youth programs. Elroy the Elk, the fraternal organization’s mascot, rode with them.

Eric Ziehm, a partner at Tiashoke Farm in Buskirk, and his sons were putting the finishing touches on their tractor’s lights. According to Ziehm’s wife Jessica, they’d attached 3,500 lights.

“This is the event we get excited for,” Ziehm said. “We haven’t missed one yet. This is a great time, great event.”

Sandwiched between massive tractors and a gargantuan crop sprayer was Zach Wilbur’s 1970 Mustang lawn tractor. Wilbur said he’d torn the tiny yellow tractor apart and rebuilt it with some street rod-type modifications. “I can do doughnuts with it,” he said, and planned to do that along the parade route.

Staff from Betterbee, a beekeeper’s supply house in Greenwich, had created a bee yard on wheels for the parade. The float included a giant beekeeper’s smoker, emitting smoke. Staff from the business’s departments dressed up in beekeeper’s protective clothing and one person wore a bee costume.

“We’ve been a sponsor for many years,” said staffer Elizabeth Ellen. “This is our first time participating. Betterbee had a big push for community engagement this year.”

Children at the Greenwich Youth Center spent about a month decorating the tractor and hay wagon loaned by Bunker Hill Business Owners, said Chey Blackmer, the center’s director, and Mikayla Gutasy, the program coordinator. The kids decided on “How the Grinch Stole Christmas” as a theme, they said, but instead of the Grinch stealing the Christmas presents and decorations, they thought the tractor driver should be the Grinch making off with the Whos.

The tractor parade “is their favorite time of the year,” Blackmer said.

The Alibozek family had brought a 1976 International tractor and equally vintage manure spreader from their beef and hay farm in Adams, Mass. Their theme was “Spreading Christmas Cheer.”

“I cleaned it after the last time I used it in July,” Ashton Alibozek said as his wife Kelley and sons Payton and Parson took their seats in the spreader. “It’s as clean as it gets.”

Alibozek said he’d learned about the parade from Andrew Austin, the White Creek mechanic who keeps their equipment running.

“He said we should go,” Alibozek said. “We came last year and fell in love with it.”

Greenwich Family Dentistry, a parade sponsor, entered for the first time this year. Staff had created a blue and white “Frozen” tableau, featuring a live Elsa and blow-up Olaf the snowman and Sven the reindeer. Nicholas Thomas was driving the blue New Holland tractor, on loan for the night from Capital Tractor.

“This is awesome for the kids!” Thomas said, clearly impressed by the displays.

Reached Sunday afternoon, Eustis said he didn’t have an estimate of the crowd size, but all indications were that it was at least as big as last year’s.

“People were 10 and 12 deep along the parade route,” Eustis said. Others watched remotely on the chamber’s Facebook Live and YouTube livestreams, which attract viewers from “all over the world,” he said. The event is believed to be the largest lighted tractor parade in the U.S.

“We started planning in July this year,” he said. “I think our website and social media helped a lot to generate buzz.”

Businesses on Main Street “did very well” during the event, he said. “Some places had lines out the door.”

Besides local food and drink establishments, 11 food trucks were set up along the parade route.

The event “brings people to Greenwich who have never been here before,” Eustis said. “It brings attention to the agricultural community and local businesses. The residents love it. It’s a great way to kick off the holidays.”

Eustis thanked the Greenwich Department of Public Works, “which goes above and beyond every year,” and the Cambridge-Greenwich Police Department for traffic and crowd control.

Best Use of Lights

2nd - Our Little House on the Hill Family Farm 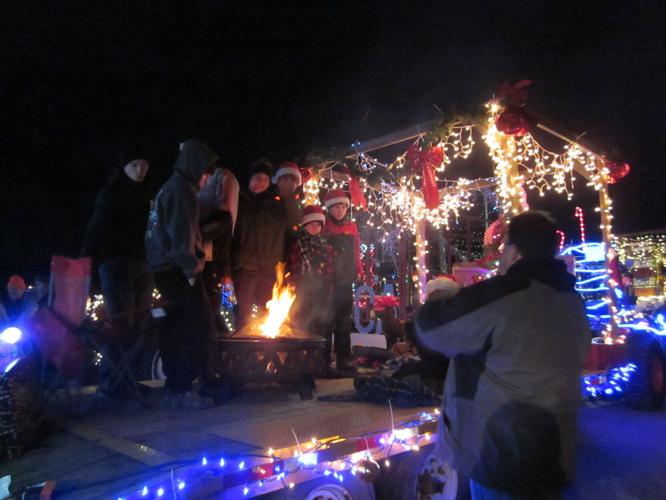 Scouts from Greenwich BSA Troop 127 had a campfire on their float to keep them warm during Saturday's Greenwich Holiday Lighted Tractor Parade. 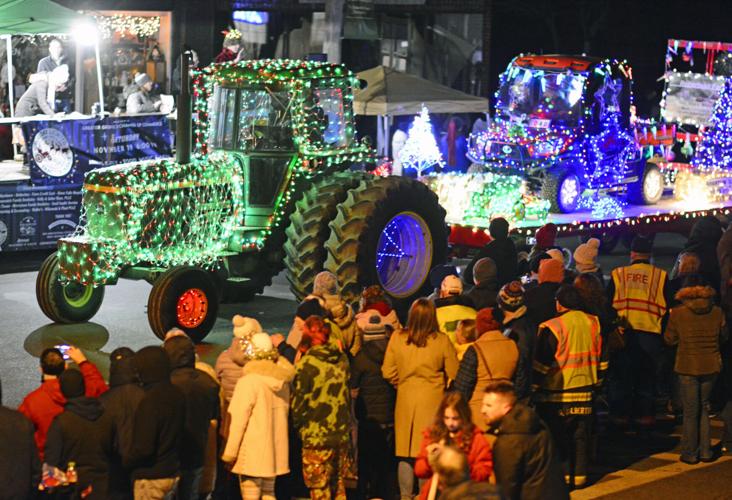 Crowds line Main Street near the reviewing stand as the 10th annual Greenwich Holiday Lighted Tractor Parade makes its way through the community on Saturday might. 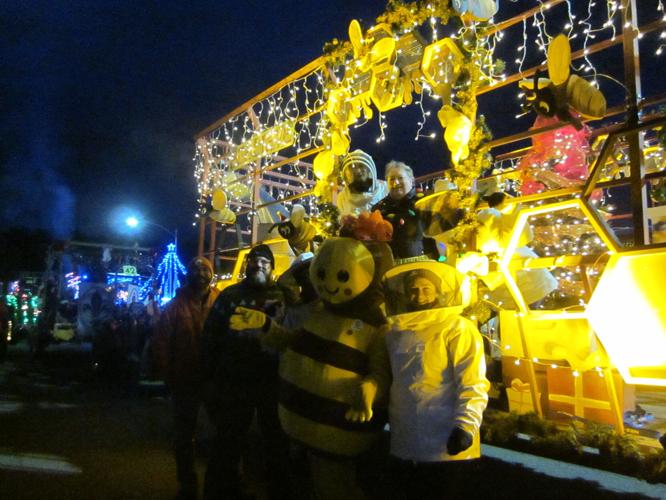 Staff members at Betterbee, a beekeeping supply company in Greenwich, created a bee yard complete with a bee for their float in Saturday's Greenwich Holiday Lighted Tractor Parade. 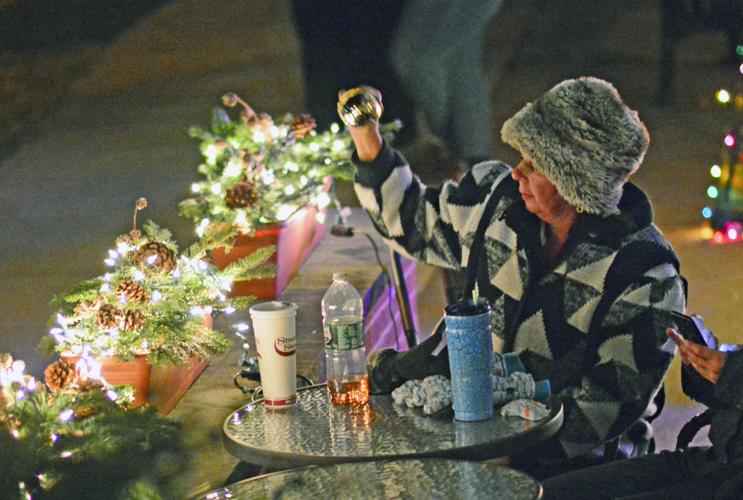 Sitting at a decorated table area on Greenwich's Washington Square on Saturday night, a patron rings a bell as she cheers for the lighted tractor parade. 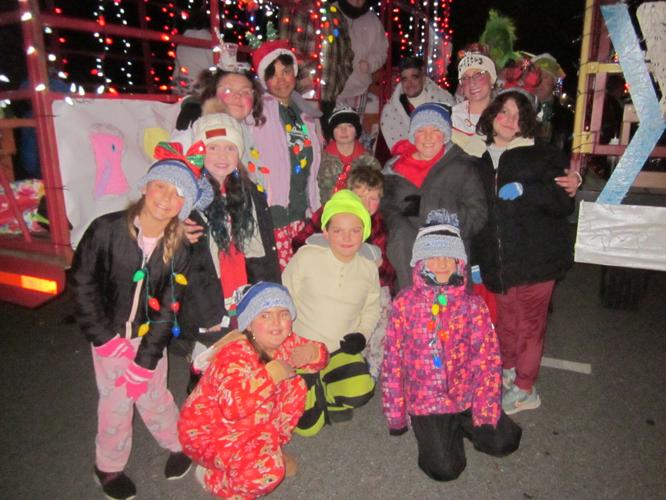 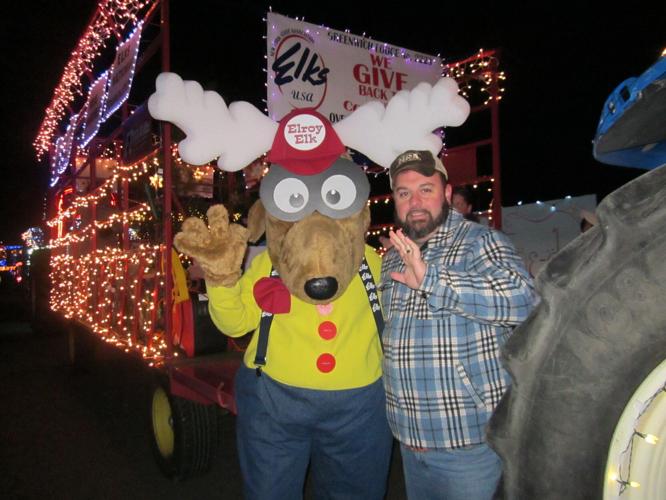 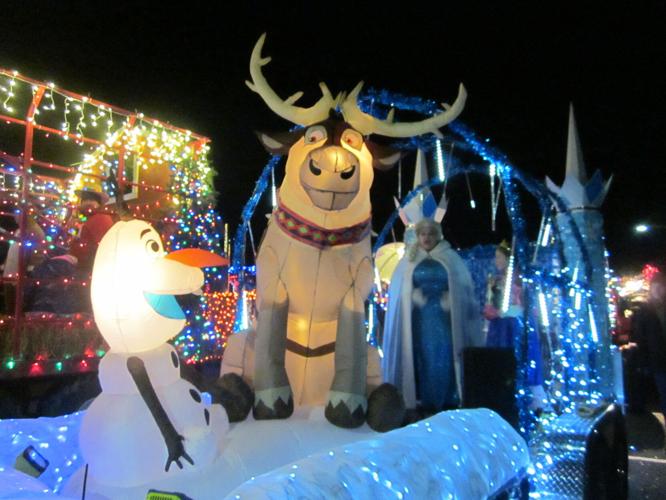