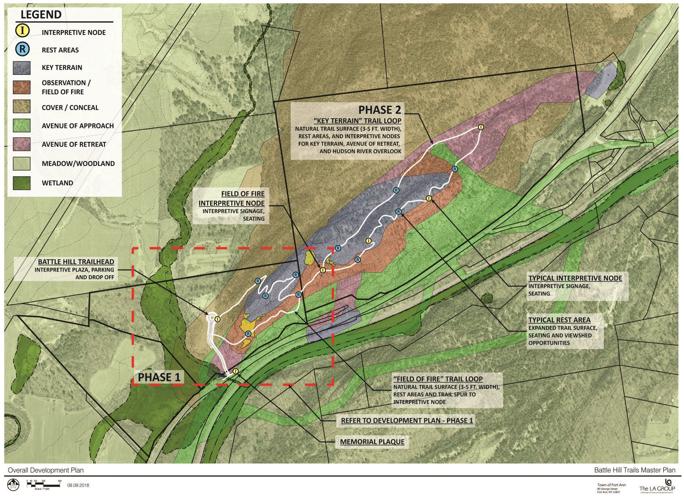 This map, created by the LA Group, shows a draft overall development plan for the site of the 1777 Revolutionary War Battle of Fort Anne. 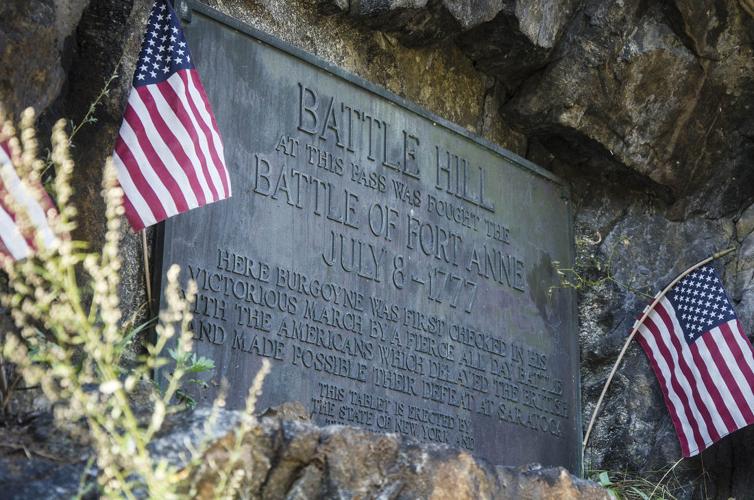 The Battle Hill plaque commemorating the Battle of Fort Anne sits in the rock face along Route 4.

FORT ANN — Draft plans to develop an educational walking trail through a Revolutionary War battlefield will be presented to the public at an upcoming town board meeting.

The July 1777 Battle of Fort Anne is considered a crucial battle before British troops were overtaken at Saratoga. A town battle committee has been working with the Civil War Trust, which also encompasses Revolutionary War history, to preserve the site and create educational kiosks along a nature trail. Those kiosks, said Councilman Samuel Hall, will describe what happened at certain sites and other historical information.

Last year, Big Boy Construction signed over a 165-acre site where the battle took place, and now the town is working on purchasing another portion from Caprood Holdings LLC, Hall said. The Civil War Trust, part of the U.S. Department of the Interior, is working with the town on a grant opportunity to potentially cover the cost.

There’s still surveys to finish and draft plans to review, but the idea is to have a parking area at the trail head with a walking path that’s between three and five feet wide. Hall told town board members at a meeting Aug. 13 that the plan is to leave the site in its natural state, except for the trail installation.

The LA Group, which is working with the town on trail plans, will present draft designs at the monthly town board meeting, which begins at 6 p.m. on Monday, Sept. 10, at the town hall, 80 George St., Fort Ann.

WHAT: Fort Ann Town Board meeting with presentation on Battle Hill trail proposal

FORT ANN — The final victory in the town’s fight to preserve a Revolutionary War battlefield ended not with a surrender but with a celebration.

FORT ANN — A Fourth of July announcement by U.S. Secretary of the Interior Ryan Zinke at the Antietam National Battlefield in Maryland contain…

FORT ANN — After 239 years, the fight for Battle Hill is over.

The town of Fort Ann has submitted a grant application to the state to assist with development of the Battle Hill educational trail and has purchased a parcel of land nearby.

The biggest star in our galaxy is about to die, here's what that means for Earth

This map, created by the LA Group, shows a draft overall development plan for the site of the 1777 Revolutionary War Battle of Fort Anne.

The Battle Hill plaque commemorating the Battle of Fort Anne sits in the rock face along Route 4.