The city's Planning Board, on Tuesday, tabled a plans to construct a 21-unit apartment complex in the heart of downtown after questions about whether the four-story building meets the current zoning requirements. 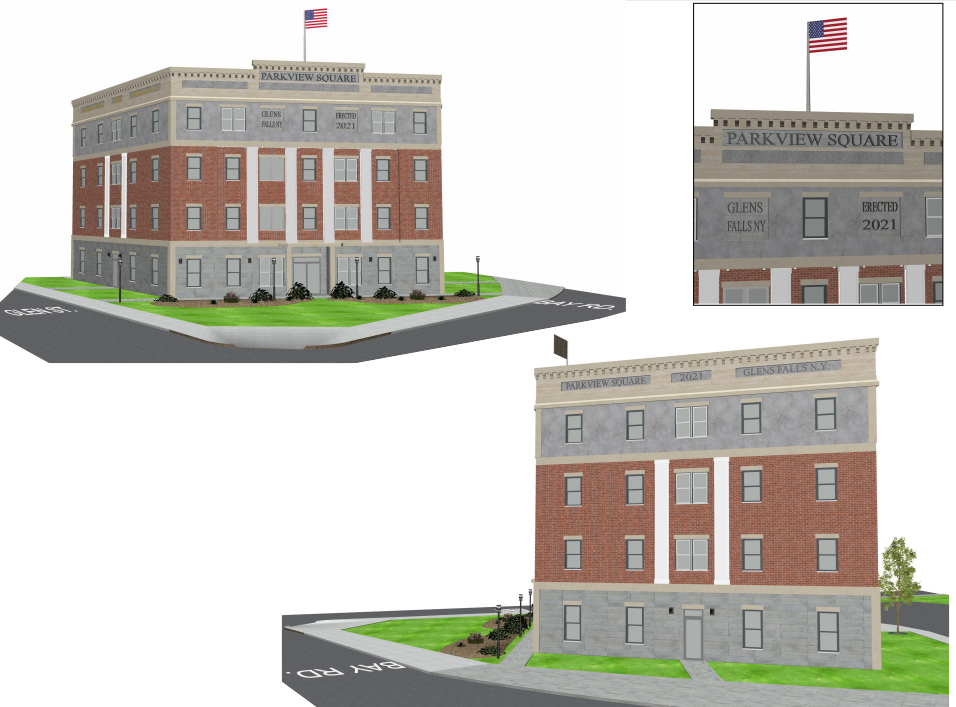 The city's Planning Board on Tuesday tabled plans to build a four-story apartment complex at the corner of Glen and Bay streets. Developer Chris Patten is hoping to develop the 21-unit apartment complex on a vacant piece of land located directly across the street from City Park.

GLENS FALLS — Plans to build a 21-unit apartment complex in the heart of downtown may have been dealt a blow on Tuesday, after it was pointed out the proposed project does not comply with a local zoning law.

During a virtual Planning Board meeting, Judy Calogero, chairwoman of the city’s Industrial Development Agency, said the size of the proposed apartment complex at the corner of Glen and Bay streets must be reduced by half to meet zoning requirements.

Developer Chris Patten has a contract to buy the plot of undeveloped, commercially zoned land that sits next to the historic Episcopal Church of the Messiah, directly across from City Park. He wants to build a four-story, 21-unit apartment complex with enough parking for 32 vehicles.

But Calogero, who has spoken out against the project several times, pointed to a density requirement in the city’s zoning laws, which requires at least 2,500 square feet of lot space for each apartment.

The lot is a little larger than 23,000 square feet, which means, according to the law, it can accommodate no more than nine units.

“To put it another way, to permit the development of 21 dwelling units as proposed, the square footage of the lot area would need to be at 52,500 square feet, or more than double its current size,” Calogero said.

But a lawyer for Patten, John Lapper, said the Planning Board has ignored that provision multiple times on larger projects — the apartment complex at 14 Hudson Ave., for example, and Broad Street Commons, the affordable housing unit across from Hannaford Plaza. Both of those projects were approved.

Lapper said a precedent has been set by not enforcing the provision, and it would be “selective enforcement” if his client’s project was subjected to it.

Both the Hudson Avenue project and Broad Street Commons have the same density requirement as Patten’s project, according to zoning laws.

Tax breaks were eventually approved for the other two projects as well.

Patten said he can cite numerous other examples of the ordinance not being enforced and believes the language should be eliminated from city code.

“It seems that on this particular project because the board doesn’t — or maybe some people are not interested in having this building go through, I’m being held under a microscope. One that hasn’t been held up to other projects that other people had interest in having built,” he said.

Edward Fitzgerald, a lawyer for the Planning Board, said “every parcel is different,” and whether the provision is enforced should be determined on a case-by-case basis.

“Whether prior actions by the board created a precedent that the board cannot enforce on this particular project would be examined on a case-by-case basis, which I would advise you to do privately, not in a public meeting that’s being recorded,” he said.

The Planning Board moved to table the project, citing other concerns, including architectural plans and design for the parking lot.

Patten’s plans to develop the vacant green space have sparked a fierce debate among city residents, including some who welcome the development, arguing it will help reduce taxes and support local businesses.

Others have said the amount of green space in downtown is finite and must be preserved for the future.

The property is privately owned but has been used to host a number of public events in the past.

City officials, including Mayor Dan Hall, are hoping to buy the property to preserve it as a park and have not ruled out seizing the land through eminent domain.

Calogero, the head of the city’s IDA, said an apartment complex would have a negative impact on the historic character of the downtown area.

The density requirement should be enforced even if a contrary precedent has been set, she said.

“If the Planning Board has not followed that part of the code in the past, I don’t see how it being raised here as a significant issue prevents you from considering that piece of the code,” Calogero said.

Patten was visibly frustrated at points in the meeting but undeterred from his plan to develop the property.

“If you are going to impose the 2,500-square-foot density on my building, when will I find that out so I can reapply with a nine-unit building?” he asked.

Nine test positive for COVID at one Warren County business

A business in Warren County has had eight employees test positive for COVID this week, as well as one contractor who also worked for the business.

A Chester man walked away with only a hand injury after he crashed into a stalled truck on the Northway on Wednesday.

Police: Tractor-trailer driver was more than twice the legal limit for intoxication

A tractor-trailer driver was arrested after police said he drove at more than twice the legal limit for intoxication.

A Glens Falls man was arrested on Thursday after police said he struck a woman with a baseball bat.

A North Creek man was seriously injured on Sunday in a motorcycle accident in Lake George.

The city's Planning Board, on Tuesday, tabled a plans to construct a 21-unit apartment complex in the heart of downtown after questions about whether the four-story building meets the current zoning requirements.

The city's Planning Board on Tuesday tabled plans to build a four-story apartment complex at the corner of Glen and Bay streets. Developer Chris Patten is hoping to develop the 21-unit apartment complex on a vacant piece of land located directly across the street from City Park.