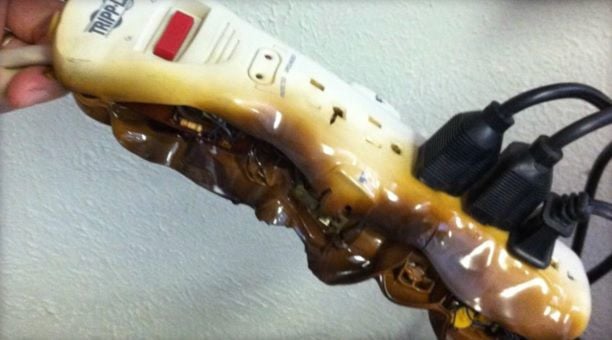 This power strip was melted when it was used to power an electrical space heater in Oregon last fall. 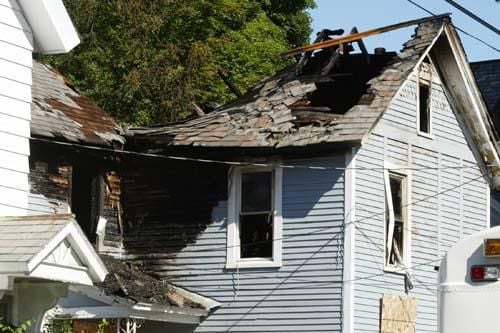 A 2008 fire that killed a man and destroyed this Granville home was blamed on an overloaded power strip. Local safety officials want the public to know about the risks associated with power strips and extension cords and practice safe use of such equipment.

Fire experts in the region have long known that improper use of power strips and extension cords is a significant fire hazard.

The trouble has been getting the message to members of the public who use the devices, particularly in the coldest and warmest parts of the year, when high-powered devices like heaters or air conditioners may be improperly plugged in to them.

A fire last weekend that killed a Granville woman has been linked to an overloaded power strip in the victim’s bedroom. The victim, Kimberly Collins, 58, was unable to get out of the home during the smoky fire that heavily damaged her bedroom.

State Police believe there were at least an air conditioner, television and electric heater plugged into the power strip identified as the likely source, with other devices possibly connected as well.

“There were a lot of things plugged into it,” said State Police Investigator Justin Olsen, who was among those investigating the fire.

There was only one outlet in the room, as the home was an older one and older homes were not built with as many electrical outlets as newer ones.

Washington County Fire Coordinator Glenn Bristol said the fire remained under investigation, and exactly what caused the fire on or around the power strip was still being investigated. But it appeared the devices plugged into power strips in the room exceeded the wattage recommended for the strips that were found in the room.

There was also no indication that smoke detectors in the home were in working order.

Not a new problem

“Over the years, we have had a lot of them (fires caused by power strip misuse),” said Warren County Fire Coordinator Brian LaFlure.

A 2008 fatal fire in Granville was also blamed on an overloaded power strip, and local fire investigators issued warnings at that point about overloading them.

LaFlure said power strips themselves can be overloaded by devices that draw too much electricity, but the outlet into which the strips are plugged can be overwhelmed if they aren’t rated to handle the power that is being used by multiple devices. That is a particular issue in older homes.

Plugging computers and low-watt lights into a power strip usually isn’t an issue, but “when you start plugging air conditioners in, you get into a problem,” LaFlure explained.

And compounding the potential danger is power strips are often placed under beds or near window curtains where there is flammable material to spread a fire, he added.

Many colleges ban the use of power strips in dormitories because of the fire risk from improper use.

Improper use of extension cords is also a fire safety issue. Extension cords are made with certain power ratings or gauges that indicate what type of equipment or appliances they can be used for, and using one that is not heavy enough for an appliance like an air conditioner can lead to failure as well.

Olsen said he was involved years ago in the investigation of a house fire in Saratoga County that was caused by an air conditioner that was plugged into an extension cord that was not rated to handle the air conditioner’s electrical load.

For more information on how to use power strips safely, go to www.nachi.org/power-strips.htm.

For more information on extension cord safety, go to www.esfi.org/resource/extension-cord-safety-tips-478.

A strong storm swept through the area late Thursday afternoon dropping heavy rain and strong wind gusts knocking out power to more than 5,000 customers across Saratoga, Warren and Washington counties.

This power strip was melted when it was used to power an electrical space heater in Oregon last fall.

A 2008 fire that killed a man and destroyed this Granville home was blamed on an overloaded power strip. Local safety officials want the public to know about the risks associated with power strips and extension cords and practice safe use of such equipment.