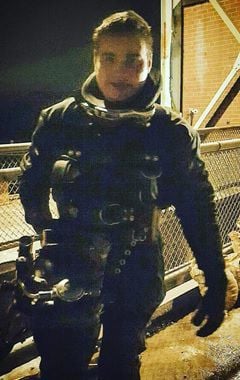 GREENWICH — An autopsy performed on the diver who died at a hydropower plant in Greenwich last week found he died from “blunt force trauma” to his torso, according to State Police.

State Police are trying to figure out how 25-year-old Steven Wingard came to be fatally injured Friday morning while diving in a pool of water on the Batten Kill, below the Dahowa Hydro plant in Middle Falls.

Wingard, of Falls Village, Connecticut, was working as a commercial diver at the plant off county Route 53 when he died around 9:30 a.m. He was underwater to clear a drain valve at the plant, which was formerly owned by Dahowa Hydro until being sold to Gravity Renewables last month.

He was attached to an air line and safety line that was being monitored by a crew on shore nearby, and they pulled Wingard up when they noticed that he had stopped moving, State Police Senior Investigator Robert Stampfli said.

Stampfli said it was not known how Wingard came to be injured while underwater, and the State Police investigation was continuing. He said there is no indication of foul play, but State Police may have the agency’s divers enter the pool later this week to see if they can help figure out what happened.

Rich Morin, former owner of Morin’s Dive Centers in Glens Falls who currently operates Underwater CSI International Academy, a program that teaches emergency divers how to respond to underwater response, recovery and investigations, has worked underwater at the plant where Wingard died, and said he did not understand how the death could have occurred.

He said he was not aware of any objects that Wingard could have hit that would cause serious trauma.

“He (Wingard) should not have encountered anything underwater that could have caused that. Perhaps prior to the dive he was struck by an object that contributed to his death. Possibly upon his entry into the water he struck his torso on the edge of the (concrete hydro plant) silo,” Morin said.

Morin questioned whether Wingard had a pre-existing injury that could have led to a medical issue underwater.

Morin said he usually had a “safety diver” with him when he dove at the plant. He said he spoke to the diver who typically accompanied him, and “We really couldn’t think of anything else in the water that could have caused the trauma.”

Wingard worked for Commercial Diving Services LLC of Connecticut. A man who answered the phone at the company Monday had no comment on the matter. A spokeswoman for Gravity Renewables also had no comment.

Heavy rain on Thursday swelled the Batten Kill and other streams, but it was unclear whether that rain played a part in the accident.

Bader Abou-hamze a friend of Wingard’s who emailed The Post-Star photos of Wingard, also questioned why he was alone when diving.

He said Wingard was a beloved son, brother and uncle.

“He was the best of the best. One of a kind, loved by many,” Abou-hamze wrote.

Wingard was fondly remembered by friends and loved ones on social media in recent days as well.

“He was a son, a brother, an uncle, a nephew, a cousin, a friend to so many. He was so unconditionally loved by everyone who had the privilege to know him,” wrote Stefanie Pederson in a post on social media. “I personally know I could never be in a bad mood if he was around. You know you could count on the fact that everyone would be laughing non-stop if he was in the room.”

Wingard was a Connecticut state champion as a high school wrestler in 2012.

A fundraising page on GoFundMe has been set up to help Wingard’s family with funeral expenses. It can be found at bit.ly/2RGbIR3.

Blog: Greenwich diving fatality has experts around the world perplexed

The June 21 death of a commercial diver at a hydro plant in Greenwich is drawing international attention from the commercial diving community,…