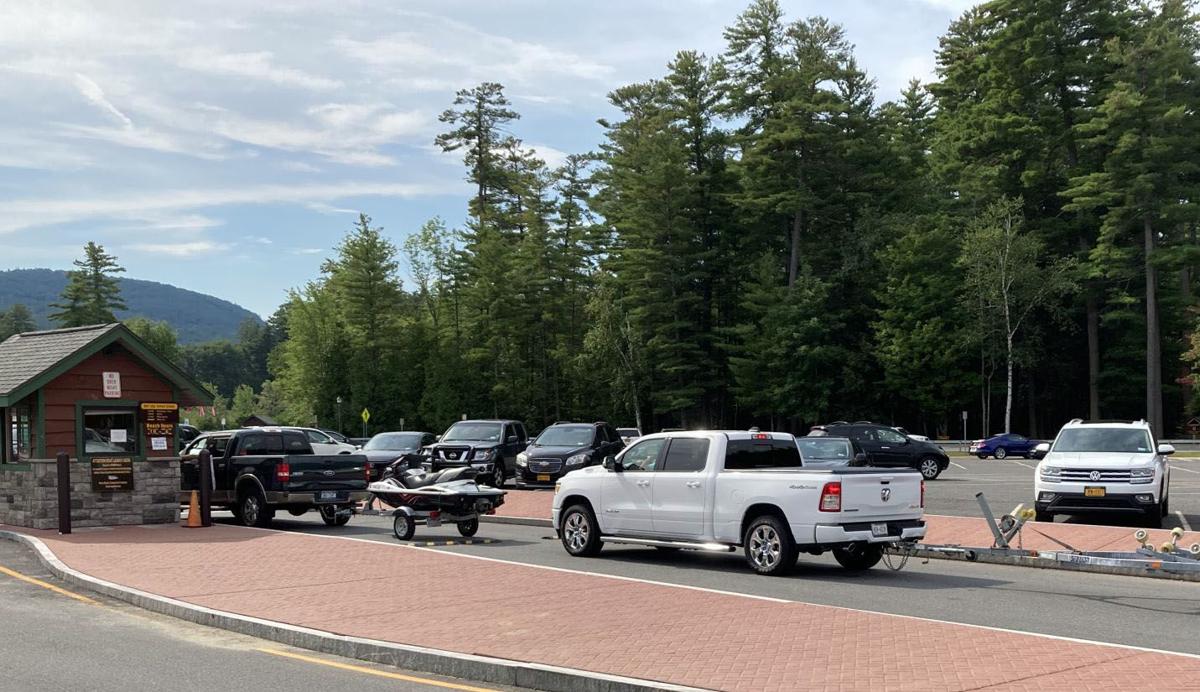 A stream of trailered boats make their way to the Million Dollar Beach boat launch on Monday in Lake George. Boating has become a popular activity this year amid the pandemic. 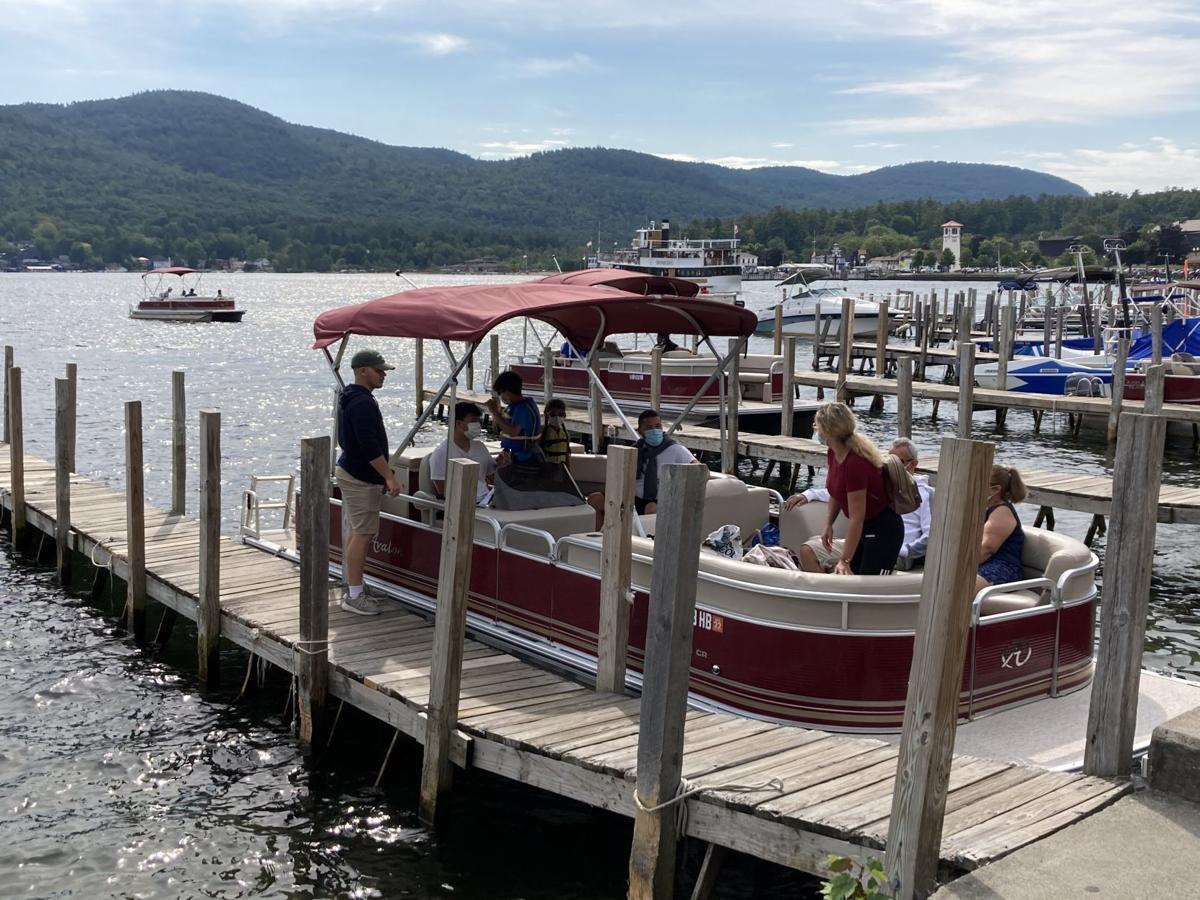 A small group of tourists board a pontoon boat Monday rented from Lake George Boat Rentals. Boating has seen an explosion in popularity this summer amid the pandemic. 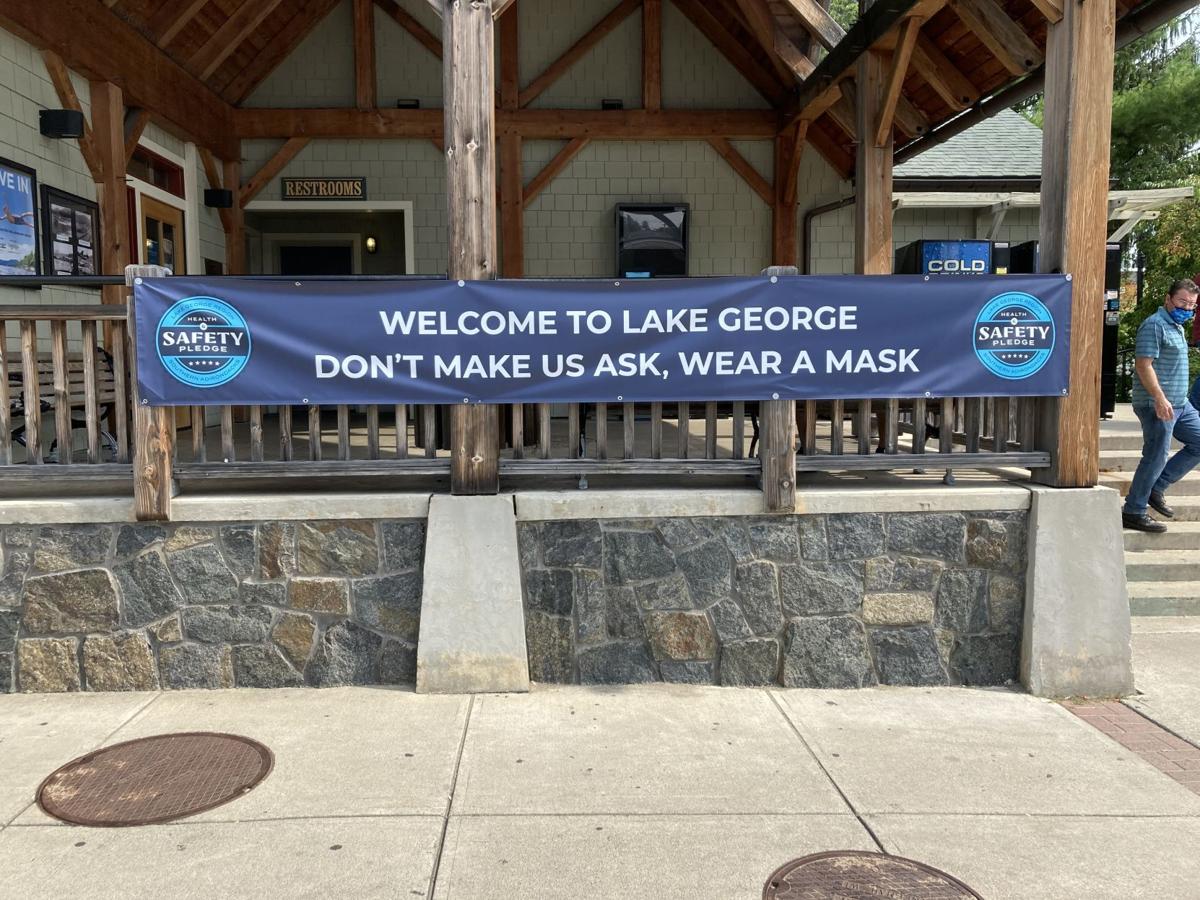 A sign reminding visitors to wear a mask hangs from the Lake George Visitor Center. Lake George has become a popular destination this summer amid the pandemic. "

LAKE GEORGE — It was supposed to be a summer full of roller coasters and water rides for the Liffords, but instead it’s been one of checkers and trying new things.

The family of four are “infrequent” hikers, but decided to make the steep trek up the newly reopened Prospect Mountain Trail on Monday before school starts up next week, said Brian Lifford, who was accompanied on the morning hike by his wife Becki and two small children.

“We’re just looking for something healthy to do with the kids prior to school starting,” Brian said as he gulped down a bottle of water half way up the trail.

Earlier this year, the Albany-area family purchased season passes to Great Escape in Queensbury in the hopes of spending a bulk of their summer enjoying the amusement park.

But all that changed in March when COVID-19 took root in the state.

“It was the first year we had them,” Becki said of the season passes.

Now, instead of riding roller coasters, the family has been playing board games and spending as much time outdoors as they can.

With popular summer destinations closed, families like the Liffords have been forced to find other ways to entertain themselves during the summer of COVID, where travel is restricted and social distancing protocols are the new norm.

“It’s been a stronger summer than we thought it would be,” he said.

Lehman attributes the county’s rise in popularity directly to the pandemic. With the state on “pause” for more than three months, people have been clamoring to spend as much time outdoors as possible.

With social distancing guidelines in place because of the pandemic, boating on Lake George has become a popular activity.

“Basically, what we’ve seen is that people really want to be on the water,” Lehman said. “Any place you had a lake in Warren County, those areas around there did very well.”

On Monday, visitors lined the sidewalks along Canada Street, where restaurants were full and parking was becoming scarcer by the minute.

Rental boat operators were booked up for the day, and Shepard Park Beach, which only just opened, had already drawn a small crowd.

Along Beach Road, benches were crowded as people watched the lake’s iconic steamboats set sail in the distance.

For Richard and Mary Anne Ciccotelli, it was a familiar sight.

“It’s just one of the most beautiful places,” Richard said.

The Westchester couple used to bring their children to Lake George every summer, but hadn’t visited the area in at least 15 years, Richard said.

But with concerns over the pandemic, the couple has been taking short day trips to get out of the house. They were on their way to Saranac Lake, but decided to stop in the village and relive some of their old memories.

It’s a good way to get out of the house and enjoy the good weather, Mary Anne said.

“At first we were bound to the house. We did projects up the galore … that got old after three or four months,” she said. “Now that the summer has come, it’s been like ‘We’ve got to get out of here.’ “

The good weather coupled with a plethora of outdoor activities to choose from created the “perfect storm” for the region’s tourism industry, said Sara Mannix, the owner of Mannix Marketing.

Mannix operates LakeGeorge.com, a tourism website focused on promoting the Lake George region. The site, she said, experienced a “significant” uptick in traffic this year, with page views in excess of 3.8 million between June and August.

She added that much of the sites traffic has originated from New Jersey and metro-New York, a sign that visitors were looking to stay local as COVID cases soared elsewhere in the country.

“I attribute this to the fact that there’s been so much collaboration in Lake George at a higher level than ever before,” Mannix said.

Recreational activities have drawn the interest of site visitors the most, Mannix added.

Mannix said the unprecedented travel restrictions put in place this year have opened the door for Lake George in the years ahead.

“There are people who came because they usually go to Poland every year or they go to the Bahamas every year,” she said. “We have an opportunity to change their behavior and say ‘You know what, the Bahamas are a little expensive and we had so much fun at Lake George, let’s go there every year now.”

Meanwhile, at the Million Dollar Beach boat launch, a steady long line of trailered boats were spotted waiting to launch.

For Mike Archanbanlt, a boat inspector with the Lake George Park Commission, the pandemic has made for a busy season. The inspection program was delayed by three weeks but it’s been busier than ever, he said.

The Lake George boat inspection program was delayed by three weeks this year because of the coronavirus pandemic, but inspectors have already made contact with 1,500 more boats through July 31 than they did last year.

“We were three weeks late going in, but we’ve more than made up for it,” he said.

Archanbanlt said he’s noticed a lot of boaters from New Jersey, which is “typical,” but added there’s been a rise in the number of new boaters compared to years past.

“People are just looking for something to do,” he said.

For Paul Binkerous, boating is nothing new, but he’s been doing it a “whole lot more” with his wife Jennifer since the pandemic.

“We’ve been spending more time here than our house,” he said.

Binkerous said he’s noticed a lot more boaters this year compared to years past, but doesn’t mind. The lake, he said, is big enough to accommodate everyone.

“It’s the only thing that’s saved our sanity this year,” he said.

Great Escape not opening in 2020

A stream of trailered boats make their way to the Million Dollar Beach boat launch on Monday in Lake George. Boating has become a popular activity this year amid the pandemic.

A small group of tourists board a pontoon boat Monday rented from Lake George Boat Rentals. Boating has seen an explosion in popularity this summer amid the pandemic.

A sign reminding visitors to wear a mask hangs from the Lake George Visitor Center. Lake George has become a popular destination this summer amid the pandemic. "