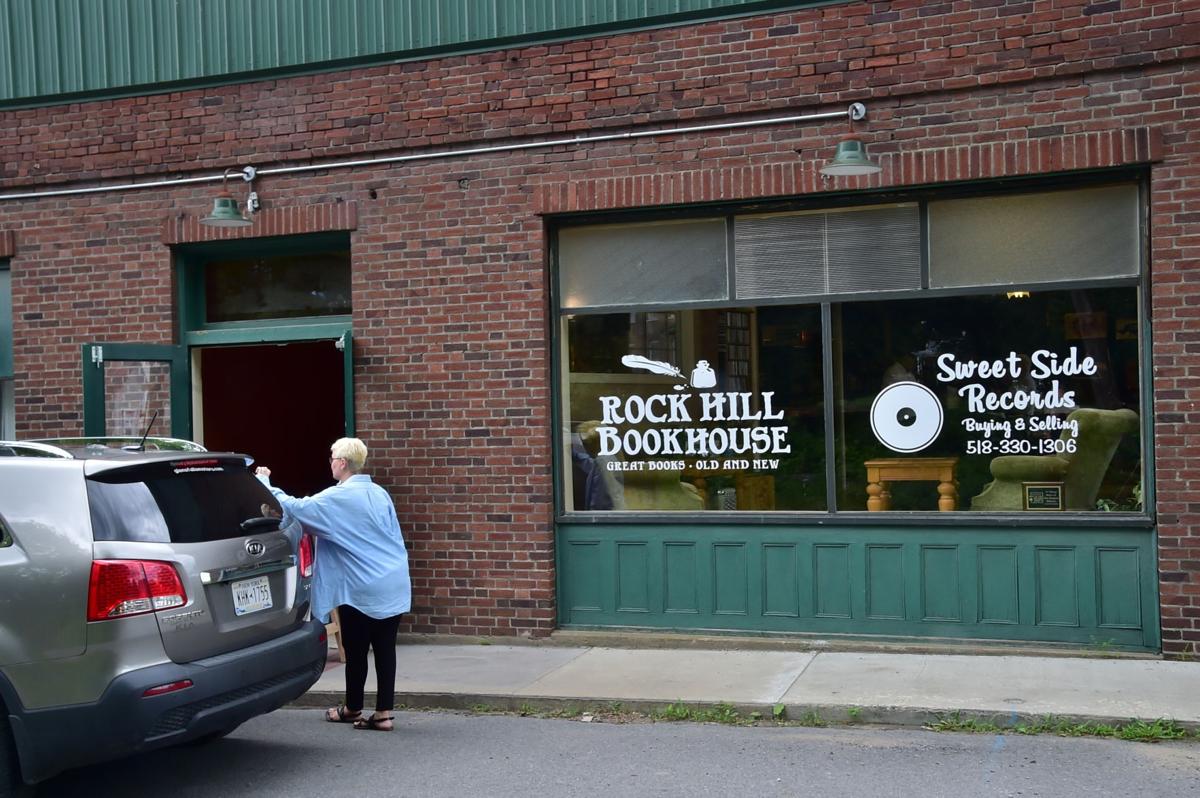 Tammy Aldous, hoping to make some sales, brings boxes of vinyl albums in to Sweet Side Records for owner Ed Martuscello to take a look at. 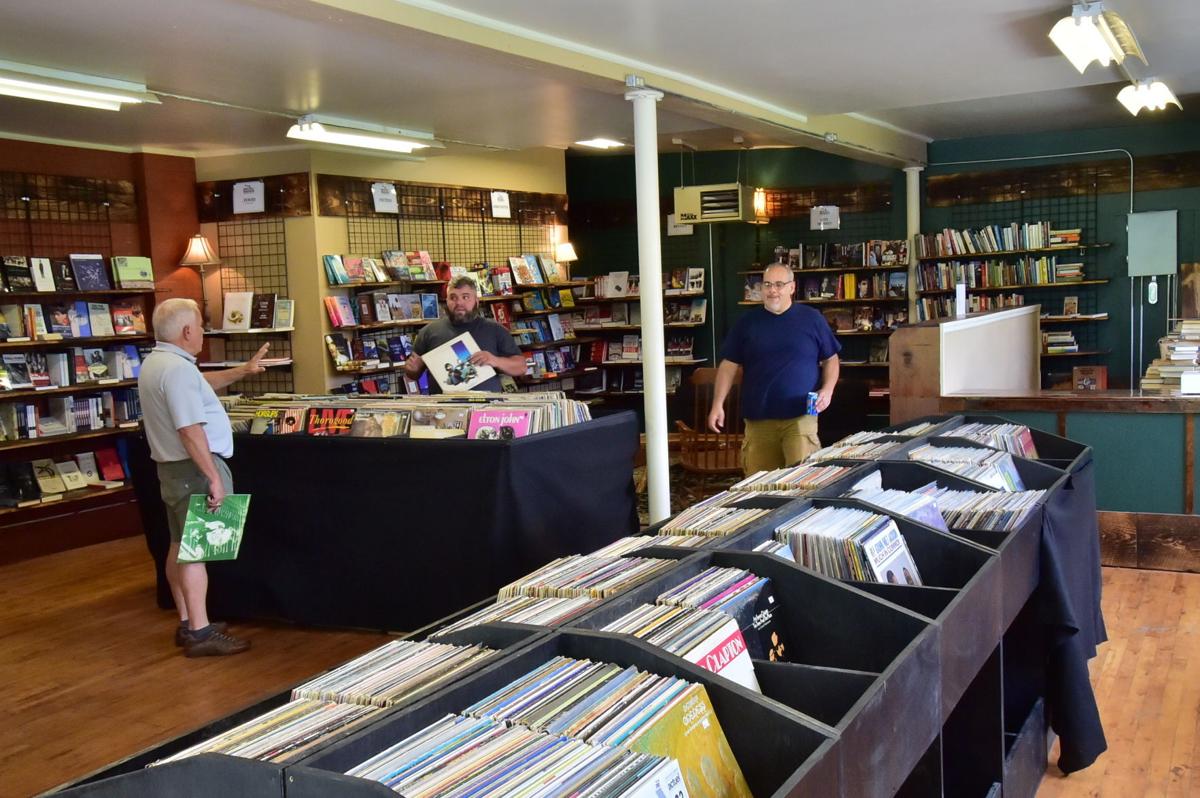 Ed Martuscello, center, speaks with a customer on last week while Matt Funiciello, right, prowls the newly opened shop. The two men are partners in the Rock Hill Bookshop and Sweet Side Records at 18 Curran Lane in Glens Falls.

GLENS FALLS — A new records and books shop has opened in the Shirt Factory Annex on Curran Lane, celebrating the physical and sensory appeal of art forms that can also be found, disembodied, online.

The Bookhouse and Sweet Side Records offer used records and used and new books to a clientele that still appreciates vinyl and paper. Despite predictions those customers would vanish with the proliferation of new listening and reading technologies, they are still around, and a trickle of them has been finding the way to Curran Lane.

Matt Funiciello (books) and Ed Martuscello (records) are hoping the trickle becomes a stream as more Shirt Factory shops open for the summer, crowds come to the Thursday night food truck corrals and visitors use the Warren County Bikeway, which runs near the building.

Funiciello is the owner of Rock Hill Bakehouse, running a breadmaking business and a cafe out of a space around the corner in the Shirt Factory Annex.

Martuscello had been selling records out of bins in the cafe since it opened early last year and for years at the previous Rock Hill breadmaking site in Moreau. Funiciello, meanwhile, always had racks of books on display in the cafe for customers to read at their table or to take home.

When Adirondack Rustic Rose moved out of the space on Curran Lane, Funiciello saw a chance to move from dabbling in the book world to a more professional and a bit more commercial endeavor.

The shop, he said, “fulfills and satisfies a desire of mine to be a part of further passing along other people’s knowledge. It’s definitely not necessary for us to make a profit at it.”

Funiciello picks the new books from the overstock of Powell’s Books, a book wholesaler in Chicago. The used books come from his own collection and from people who bring them in by the box, either to donate or for a modest amount of store credit.

The new books sell at used book prices — a quarter of retail — and the used books for garage sale prices. With used books, he looks them up online, Funiciello said, finds the lowest price, then subtracts a dollar in shipping costs.

Martuscello has been selling vinyl records for about 10 years, since a friend gave him a record player. Before opening the shop, he had deals with coffee shops in Scotia, Albany and Troy, as well as Rock Hill, and would display a couple of crates of albums in each location. Now his entire focus is on the Glens Falls shop.

Even so, he called “ridiculously small” the market of people who have record players and use them, and he laughed at the notion that vinyl is making a comeback — something he has heard people say every year for the past decade or so.

But for those who have maintained a loyalty to vinyl, or discovered a passion for it, it does have a special, even magical quality, he said.

“I think they are an anachronism,” Funiciello said, of print books and vinyl records.

“Underlying all of it is the sense of human interaction and education.

“The underlying desire there is for Ed to be doing something involving his amazing love of music. I feel the same way about books.”

The shop has been open for a week or so, but no grand opening has been held. The cafe will reopen for in-person customers within the next couple of weeks, after being closed for more than a year because of the pandemic.

Funiciello put the cafe’s menu online recently and experienced an immediate flood of orders for deliveries and pickup.

“We had to take a deep breath,” he said. “Can we handle in-store volume too?”

His long-running bread business and cafe give Funiciello a cushion and the confidence to run his new venture according to his preferences.

“My goal is to find books to enrich people’s lives and make us smarter and enjoy the act of reading someone else’s thoughts,” he said.

And when he picks books to sell, what does he look for?

“Books I really care about,” he said.

A Glens Falls artist, recently named best in the region by Post-Star readers, has released his first book — a children’s book titled “Colorworld” he both wrote and illustrated.

A Schenectady woman was arrested on Saturday after police said she drove drunk and crashed her vehicle on Route 50 in Wilton.

No one injured in Kingsbury tractor-trailer crash

Both the northbound and southbound lanes of Route 4 were closed between Green Barn Road and Route 149 as emergency crews responded to a tractor-trailer rollover.

Tammy Aldous, hoping to make some sales, brings boxes of vinyl albums in to Sweet Side Records for owner Ed Martuscello to take a look at.

Ed Martuscello, center, speaks with a customer on last week while Matt Funiciello, right, prowls the newly opened shop. The two men are partners in the Rock Hill Bookshop and Sweet Side Records at 18 Curran Lane in Glens Falls.