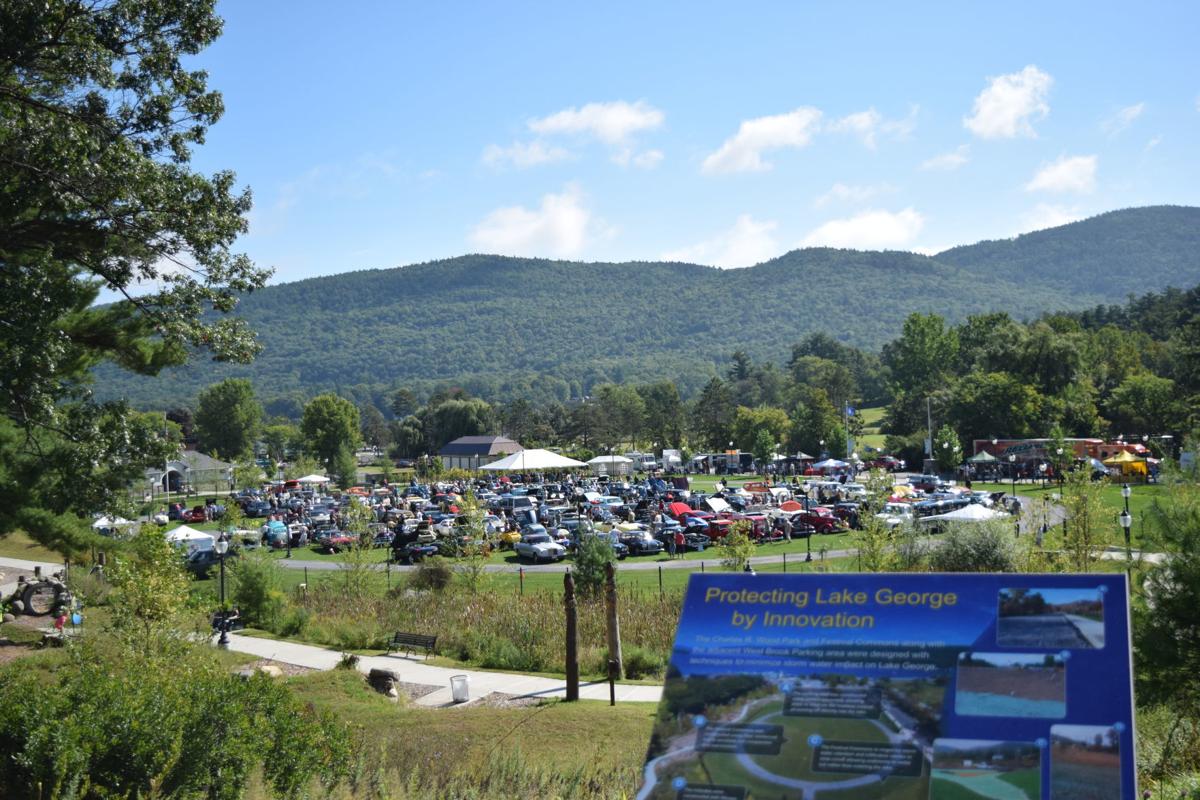 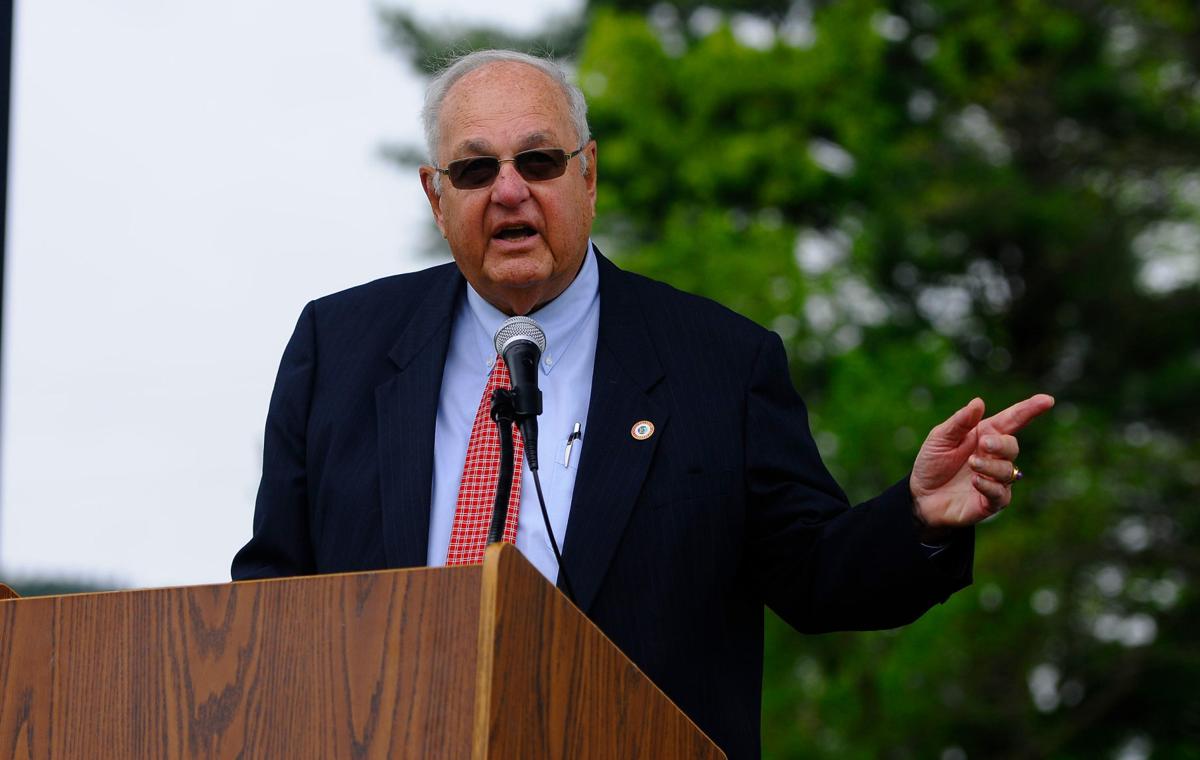 Lake George Mayor Robert Blais gestures to others on the stage as he speaks at the grand opening ceremony of the Charles R. Wood Environmental Park and Festival Commons on May 29 in Lake George. 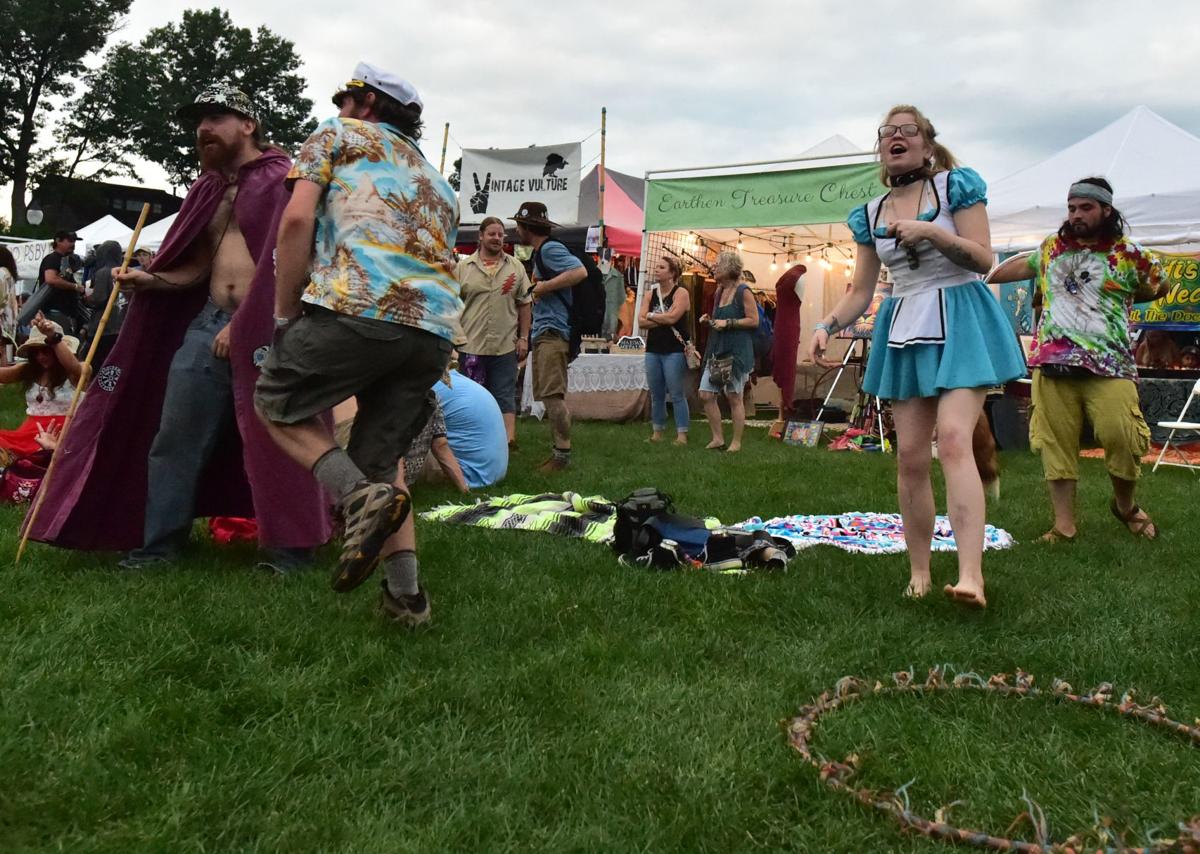 Festivalgoers sing and dance as Badfish performs in 2018 at the Adirondack Independence Music Festival at the Charles R. Wood Park in Lake George. The park was officially dedicated on May 29. 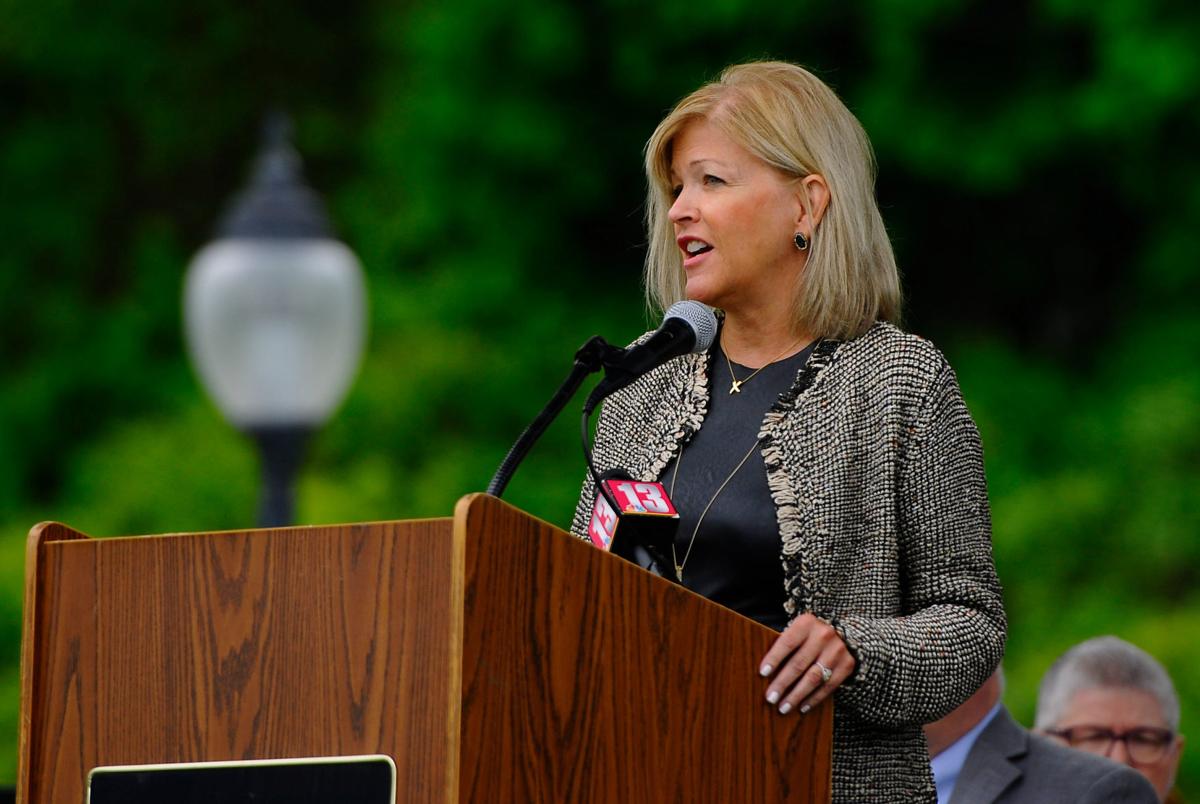 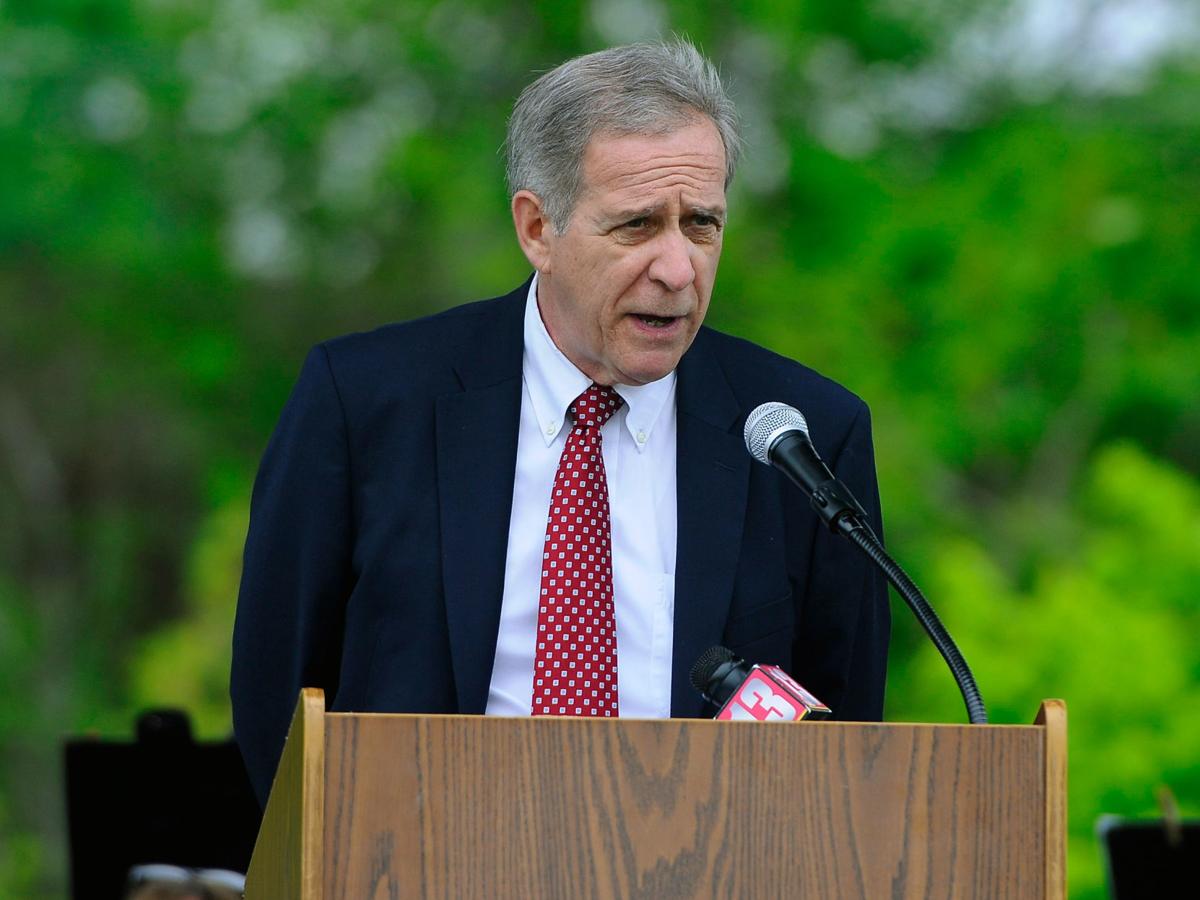 Robert Stegemann, regional director of the state Department of Environmental Conservation, speaks at the grand opening ceremony of the Charles R. Wood Park on Wednesday in Lake George.

LAKE GEORGE — It has taken three decades to get from Gaslight Village to the Charles R. Wood Environmental Park and Festival Commons, and Lake George elected officials, community leaders and environmental advocates celebrated that milestone on Wednesday.

Mayor Robert Blais said this park will be a “legacy for generations to enjoy.”

“It took so many people, so many people — many of you who are here today, to pull off something like this,” he said. “Somewhere, someone said: ‘If it’s worth it, it’s going to take a long time.’”

The site off Route 9 had been home to Gaslight Village, which was a vaudeville-themed amusement park created by Charles R. Wood. His youngest daughter, Charlene Wood, said Wednesday that the park was a favorite of her mother, but it closed in 1991 because of changing tastes.

The Gaslight Village buildings were leveled and a park created that has hosted concerts and events.

There is also a children’s play area, a skate park, public bathrooms and a walking trail. The last part of the project, a fountain and a small pool, was completed last fall.

In addition, a man-made wetland was created along West Brook Drive, which filters stormwater before it reaches the lake.

Lake George Waterkeeper Chris Navitsky said the park has been doing better than expected in removing potential contaminants from the lake. Environmental officials had the goal of removing 50% of the phosphorous and 90% of the total suspended sediments running off from the Route 9 commercial corridor. The actual numbers show that 85% of the phosphorous has been removed and 92% of the suspended sediments have been removed.

Keeping this material out of the lake reduces the chances for a harmful algal bloom, according to Navitsky. Lake George is the only one of the 12 priority water bodies in the state to have not had such a bloom.

Navitsky added that it is nice to have “a place in our overly connected world where we can disconnect, play with family, listen to music and know we are making our community better for the next generation.”

Bolton Supervisor Ron Conover, chairman of the Warren County Board of Supervisors, said he believes redevelopment of the land was a landmark partnership between government and nonprofit agencies and that paved the way for other initiatives, such as fighting the spread of invasive species, reducing salt use on the roadways and addressing failing septic systems.

In addition, the park is an economic driver that already has paid dividends with the various concerts and events hosted in the park. The wetlands also help to filter out pollutants, he said.

“What could be better than that? — Economic development, environmental remediation,” he said.

Robert Stegemann, regional director of the state Department of Environmental Conservation, read a letter from Gov. Andrew Cuomo praising the efforts that led to the creation of the park.

Stegemann also added his own remarks.

“I have to say how impressed I am with the spirit of protecting this lake and the partnership that developed to effectuate that,” he said.

Gina Mintzer, president of the Lake George Regional Chamber of Commerce, said it took vision for Charles R. Wood to open the original Gaslight Village and it took vision to transform the park into what it is now.

“That vision has afforded thousands of visitors and residents opportunities to enjoy this venue for fun, education and educational fun,” she said. “This special place is its own economic engine.”

Among the events that have been held in the park are the chamber’s Adirondack Christkindlmarkt, the American Independence Musical Festival and American Music Festival.

Gene Merlino, Lake Luzerne supervisor and chairman of the Warren County Tourism Committee, said the events at the festival commons are an important reason why local tourism remains strong. Revenues increased by $179,000 last year, which is the biggest one-year increase. The county also took in $2.86 million in sales tax receipts, he said.

Jamie Brown, executive director of the Lake George Land Conservancy, said the park brought together a diverse group of interests.

“It managed to bring together land protection, stormwater protection and, somehow, the Charlie Daniels Band as well,” he said, highlighting one of the acts to grace the stage at the park.

Lake George Association Executive Director Walter Lender said getting to this point was challenging at times, with budgets being stretched.

“We all felt it was well worth the investment,” he said.

Jeffrey Killeen, executive director of the Fund for Lake George, credited Don Rice, a past chairman of the Fund, and former LGA Chairman Victor Hershaft for pushing the project through its growing pains.

“It was they who kept us together in the formative early days of this West Brook Initiative, and it is they who we owe an eternal debt of gratitude to,” he said.

Lake George Town Supervisor Dennis Dickinson turned the attention back toward Blais for his leadership in bringing the different groups together.

“We wouldn’t be here today if it weren’t for the leadership and the never-ending drive and the efforts and never-ending commitment of our own Mayor Blais,” he said.

From Gaslight Village to the Charles R. Wood Environmental Park and Festival Commons:

Charles R. Wood Park to be dedicated next week in Lake George

The grand opening event for the Charles R. Wood Park in the village of Lake George has been scheduled for May 29 at 11 a.m.

LAKE GEORGE — Nearly 10 years after leaders in the Lake George area began planning to create a new park at the south end of the lake, construc…

LAKE GEORGE — People from outside the area may not be aware of all the outdoor recreational activities that exist in this area.

Lake George Mayor Robert Blais gestures to others on the stage as he speaks at the grand opening ceremony of the Charles R. Wood Environmental Park and Festival Commons on May 29 in Lake George.

Festivalgoers sing and dance as Badfish performs in 2018 at the Adirondack Independence Music Festival at the Charles R. Wood Park in Lake George. The park was officially dedicated on May 29.

Robert Stegemann, regional director of the state Department of Environmental Conservation, speaks at the grand opening ceremony of the Charles R. Wood Park on Wednesday in Lake George.