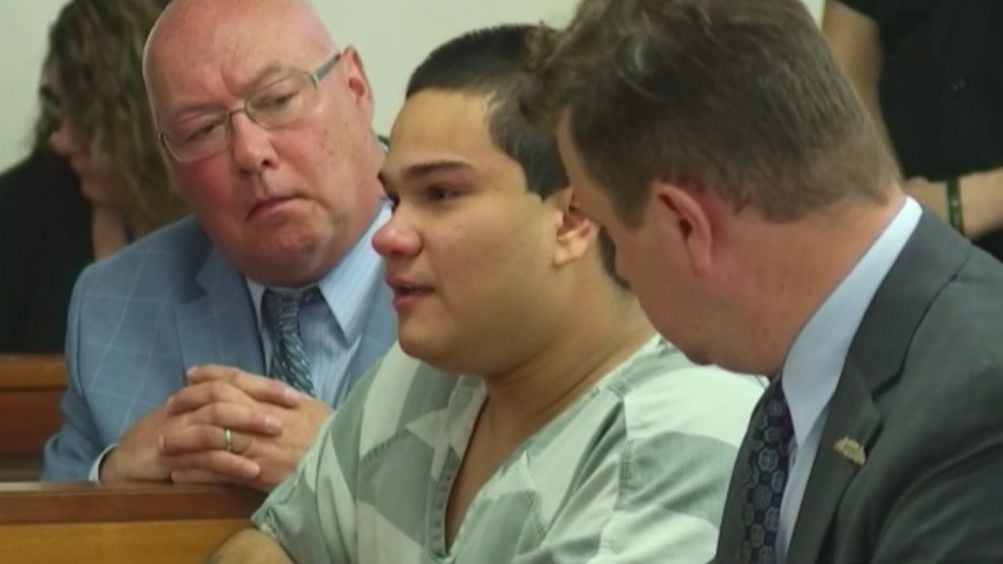 George A. 'Tony' Torres, center, of Staten Island appears in Washington County Court during his sentencing for kidnapping a 12-year-old Hudson Falls girl and taking her to New York City and sexually abusing her last fall. Torres was sentenced to 9 1/2 years in state prison. 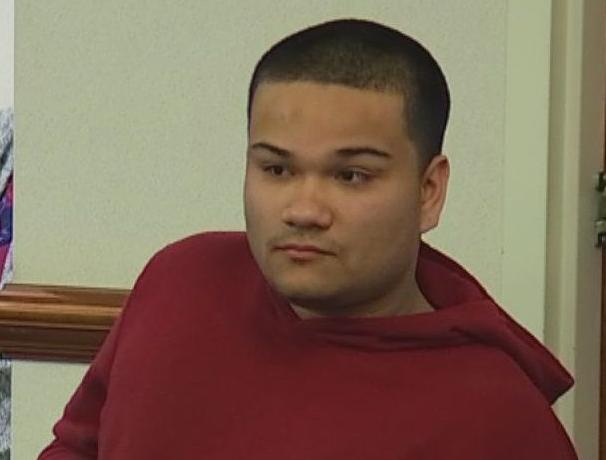 George Torres in Washington County Court in April, before he pleaded guilty to kidnapping a 12-year-old girl. Torres was sentenced to 9 1/2 years in prison followed by 10 years on parole for his role.

FORT EDWARD — The man who pleaded guilty to kidnapping for taking a 12-year-old Hudson Falls girl to New York City and sexually abusing her last fall cried Friday as he was sentenced to 9 1/2 years in state prison, several years more than the victim and her family asked for.

George A. “Tony” Torres, 20, of Staten Island, tearfully apologized to the victim’s family and pretty much everyone else involved with the case, and even thanked police and prosecutors for their work, when Washington County Judge Kelly McKeighan asked him if he had anything to say.

He rambled on for more than 5 minutes, saying he regretted his actions and was just lonely when he initiated contact with the girl through social media, and that he took her at her word that she was 17.

He said he did not abandon her in New York City after learning her age as prosecutors alleged, because she told him she was going to a cousin’s home.

McKeighan, though, said Torres’ actions after he learned the girl’s age endangered her, and his subsequent deletion of electronic communications, showed he was trying to cover up actions he knew were illegal.

McKeighan called the case “one of the most difficult” he had presided over. But he said Torres’ decision to leave her at the Staten Island Ferry station, instead of taking her to police or a relative, was most telling.

“You left her at risk in a city of millions,” he said.

The girl, who was found safe at the apartment of another man who allegedly raped her the day after Torres left her, was in court on Friday, but did not speak.

She did, though, write a victims impact statement that was read in court Friday, in which she wrote that she believed a 5- to 7-year sentence was appropriate and said she felt “bad” about the “damage I caused.”

She said she also hoped the situation served as a cautionary tale for other children in her situation who consider running away with older men.

“We are people. We make mistakes at one point in time,” she wrote. “Amen I did not get killed.”

The sentence came after Washington County First Assistant District Attorney Christian Morris outlined the actions prosecutors believe Torres took that made the case more than just a simple matter of a teen getting hoodwinked online by a girl he met online who claimed she was older than she was.

He said Torres continued to have sexual contact with the girl after she told him her true age, and then abandoned her at the Staten Island Ferry station with no money after he learned she was the subject of an Amber Alert. He blocked her phone number and erased their social media conversations as well.

Morris said New York City Police were surprised that the girl was not killed or trafficked.

Torres’ lawyer, Joseph Murphy III, disagreed with much of that account, saying it was physically impossible for Torres, a wheelchair-bound paraplegic, to have committed some of the sex acts that he was accused of. He said that Torres was emotionally stunted by an accident that killed his sister and crippled him.

“He was under the impression she was 17 years old,” he said. ‘This was a lonely, disabled young man who was desperate for a little bit of normalcy in his life, a relationship. He is not a predator.”

Torres pleaded guilty last month to the full indictment against him, which included counts of kidnapping, sexually motivated felony and tampering with physical evidence, opting to seek mercy from McKeighan instead of a plea deal that would bar him from appealing pre-plea evidentiary rulings in the case. Murphy said a notice of appeal will be filed.

McKeighan could have imposed a sentence of between 5 and 25 years. Afterward, Washington County District Attorney Tony Jordan called the prison term “significant” under the circumstances.

The convictions stemmed from the girl’s efforts to run away from home last Sept. 26, resulting in an Amber Alert warning and massive search for her that led to her being found in an apartment in New York City the next day. There were no allegations Torres held her against her will.

But under state law, she was too young to legally consent to go with him, and her lying about her age was not a defense. And prosecutors allege that when he learned her age, he did not help her return home, instead dropping her at the ferry terminal, where she met a vendor who later had sex with her. That man, Justin Morales, 20, of Staten Island, has been charged with two counts of first-degree rape in New York City.

Torres will spend 10 years on parole after he is released, and will have to register as a sex offender.

FORT EDWARD — The man who drove a 12-year-old Hudson Falls girl to New York City last fall, where she was sexually abused and raped, pleaded g…

FORT EDWARD — The New York City teen who was accused of kidnapping a Hudson Falls girl last fall, setting off a massive manhunt and Amber Aler…

Accused kidnapper: 'I didn't do anything wrong'

George A. 'Tony' Torres, center, of Staten Island appears in Washington County Court during his sentencing for kidnapping a 12-year-old Hudson Falls girl and taking her to New York City and sexually abusing her last fall. Torres was sentenced to 9 1/2 years in state prison.

George Torres in Washington County Court in April, before he pleaded guilty to kidnapping a 12-year-old girl. Torres was sentenced to 9 1/2 years in prison followed by 10 years on parole for his role.