MNF: The latest scores and updates from the Saints vs. Raiders

More than a dozen rally in Glens Falls in support of U.S. Postal Service
39 comments
Share this
Return to homepage × 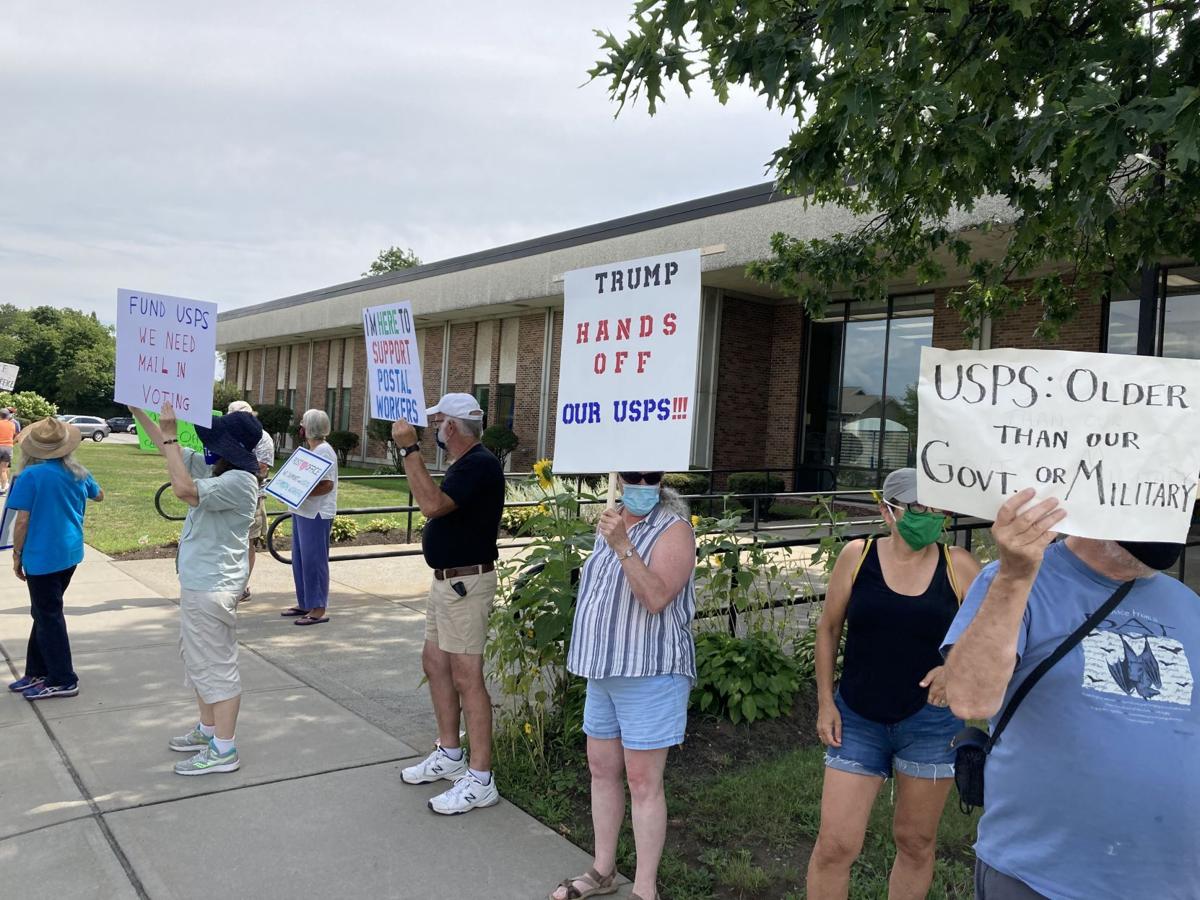 About 18 demonstrators participated in a rally last week in support of the U.S. Postal Service, in front of the Glens Falls post office on Hudson Avenue. 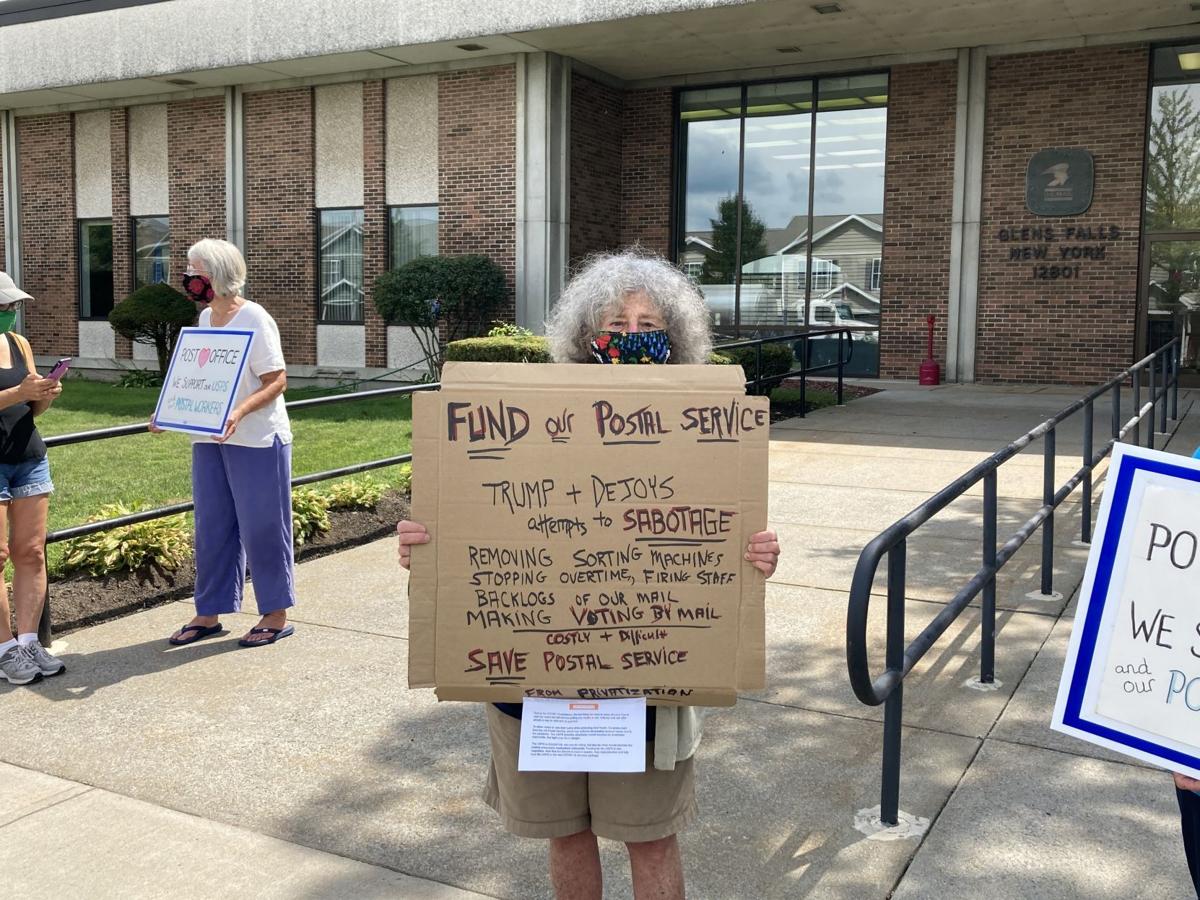 Bernice Mennis of Fort Ann organized a small rally in support of the U.S. Postal Service in front of the Glens Falls post office on Thursday. The rally comes amid a federal debate over funding the postal system.

GLENS FALLS — More than a dozen demonstrators gathered in front of the city’s post office on Hudson Avenue on Thursday in support of the U.S. Postal Service, which has been the center of a federal debate over mail-in voting and coronavirus funding in recent weeks.

Bernice Mennis of Fort Ann decided to organize the demonstration last week after reading about how the postal system has been forced to delay deliveries after a new system of operations was implemented by Postmaster General Louis DeJoy.

“About a week ago I thought, ‘We have to make a presence to support of the post office’ because it’s our community post office and it’s been undercut suddenly and directly by DeJoy,” she said.

Mennis said news of the rally was spread by word of mouth and she was expecting only a handful of people to attend.

But around 18 people showed up, many with signs that read “Save the Post Office” and “Trump Hands Off USPS.” Everyone was wearing a mask.

Several driving by honked their car horns in support of the rally.

Many in attendance believed the troubles with the postal system were politically motivated. They accused President Donald Trump of purposely creating chaos in the system in order to cast doubt about mail-in voting, which he has criticized in recent weeks.

House Democrats passed a COVID-relief bill that would provide the Postal Service with $25 billion in new funding, but Senate Republicans haven’t taken up the measure.

On Thursday, Trump said he was against any new funding for the postal system.

The money, he said, would lead to mail-in voting, something the president has said would lead to voter fraud, though there’s no evidence to back up that claim.

“They need that money in order to have the post office work so it can take all of these millions and millions of ballots,” Trump said on “Mornings with Maria,” a Fox Business TV program. “If they don’t get those two items, that means you can’t have universal mail-in voting because they’re not equipped to have it.”

“He’s not hiding it; he doesn’t want to fund it. It’s called voter suppression,” she said.

Atherden said the disruption of mail delivery will harm many in rural communities that rely on the Postal Service to deliver medication and Social Security checks, and even correspond with friends and relatives. Broadband, she pointed out, is troublesome throughout the Adirondack region.

“The aging, the vulnerable, the disabled. All those people are being impacted,” she said.

He described himself as “anti-Trump as anyone could be” and believes the post office is purposely being sabotaged in order to cast doubt about mail-in voting and to privatize the system.

“The only thing those changes will do is hurt benefits to citizens and help a few rich cats,” he said.

Mennis, meanwhile, said she was encouraged by the show of support and plans to hold similar events in the future, though no dates have been confirmed.

“We were thinking we should do this often,” she said.

The rally comes just days after the House of Representatives approved a bill that would provide the Postal Service with $25 billion in funding and prevent any operational changes from being implemented.

About 18 demonstrators participated in a rally last week in support of the U.S. Postal Service, in front of the Glens Falls post office on Hudson Avenue.

Bernice Mennis of Fort Ann organized a small rally in support of the U.S. Postal Service in front of the Glens Falls post office on Thursday. The rally comes amid a federal debate over funding the postal system.