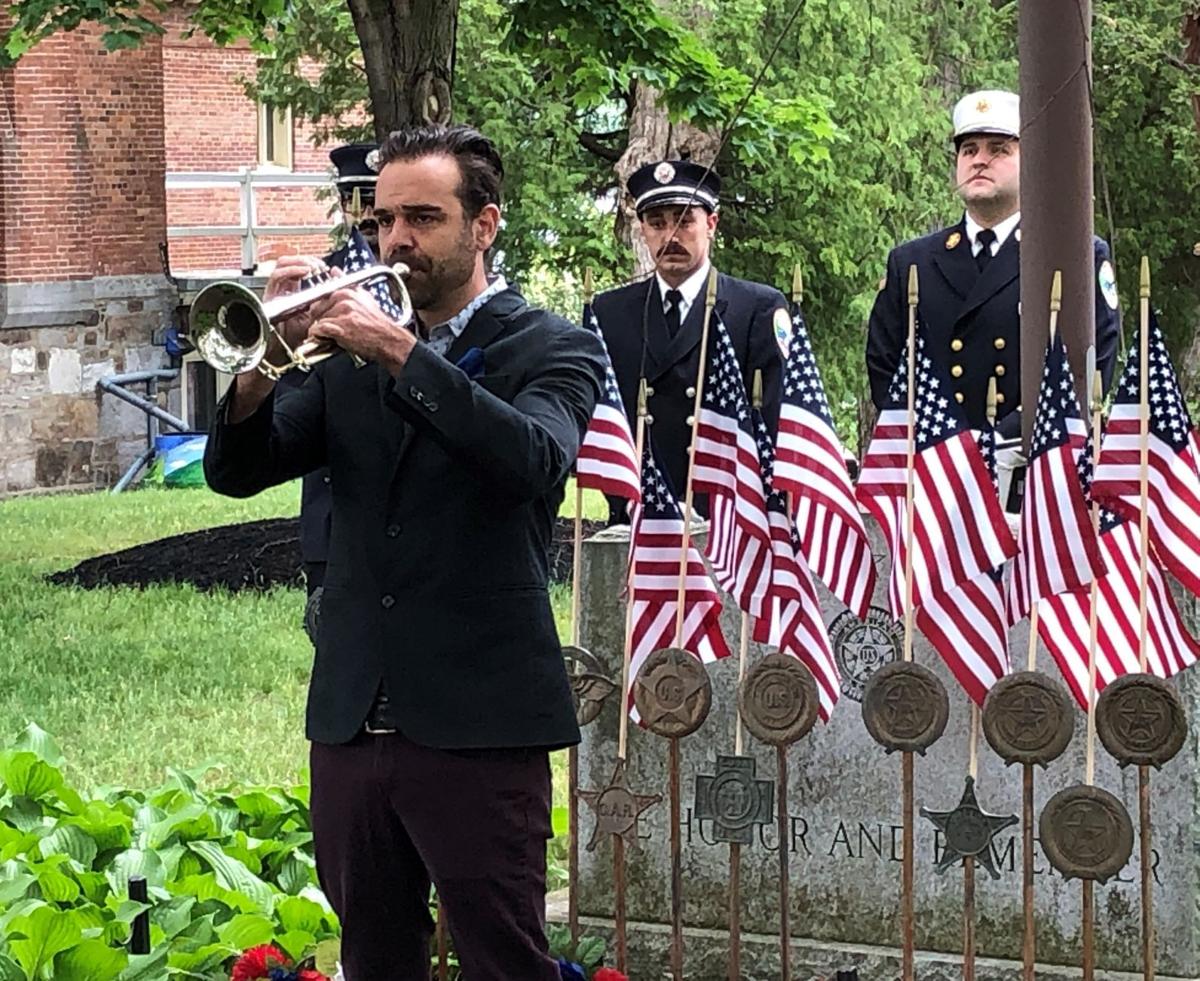 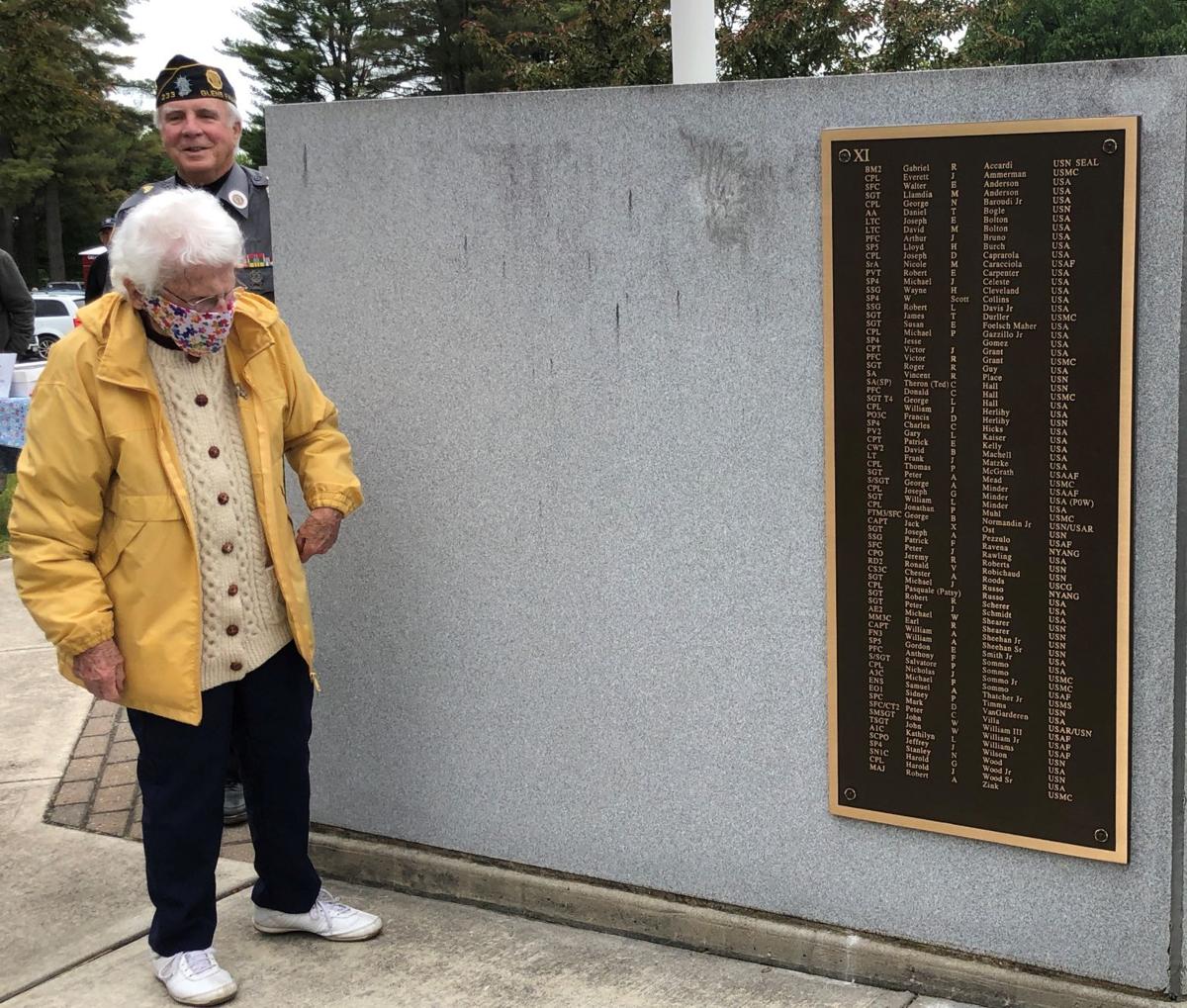 Harriet Rogers, of Glens Falls, looks at the new names that were added to the monument in Crandall Park, which were unveiled in a ceremony on Memorial Day. Rogers served in the women's branch of the U.S. Coast Guard during World War II. 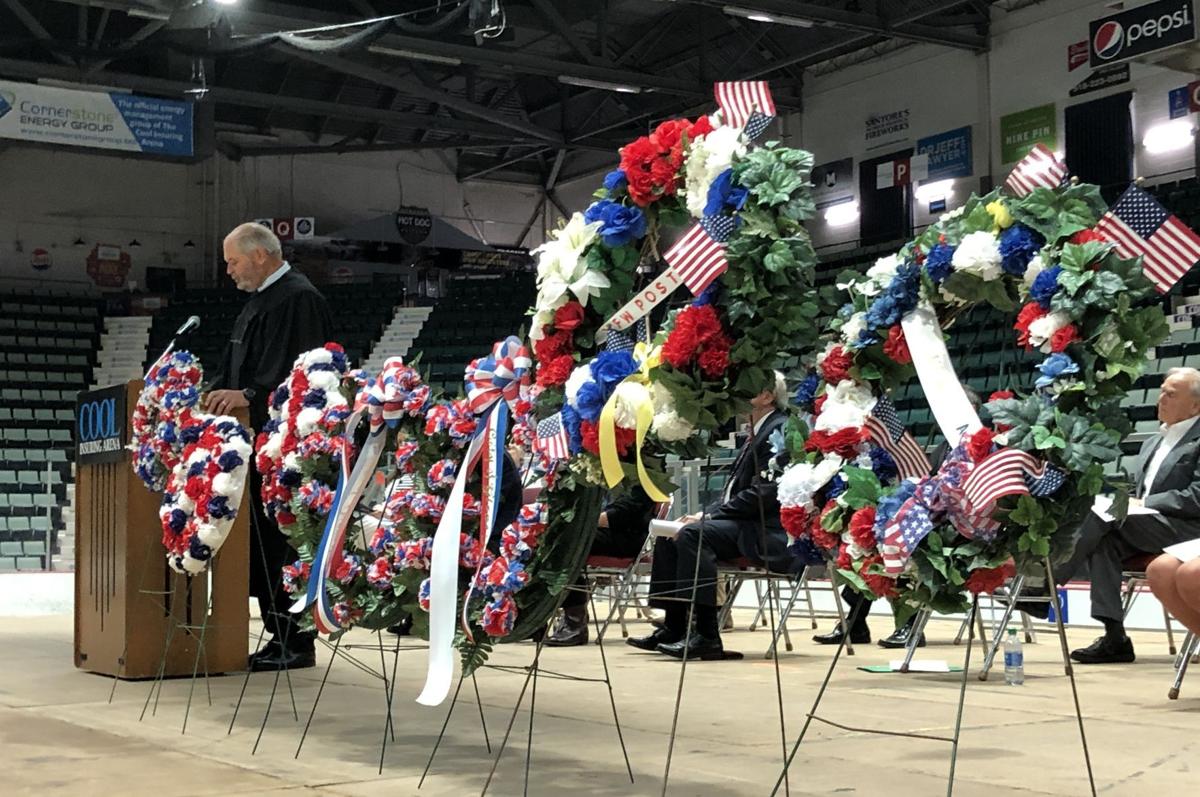 The Queensbury High School Band, under the direction of Jim Cirillo, perform at the Glens Falls-Queensbury Memorial Day remembrance ceremony on Monday at Cool Insuring Arena. 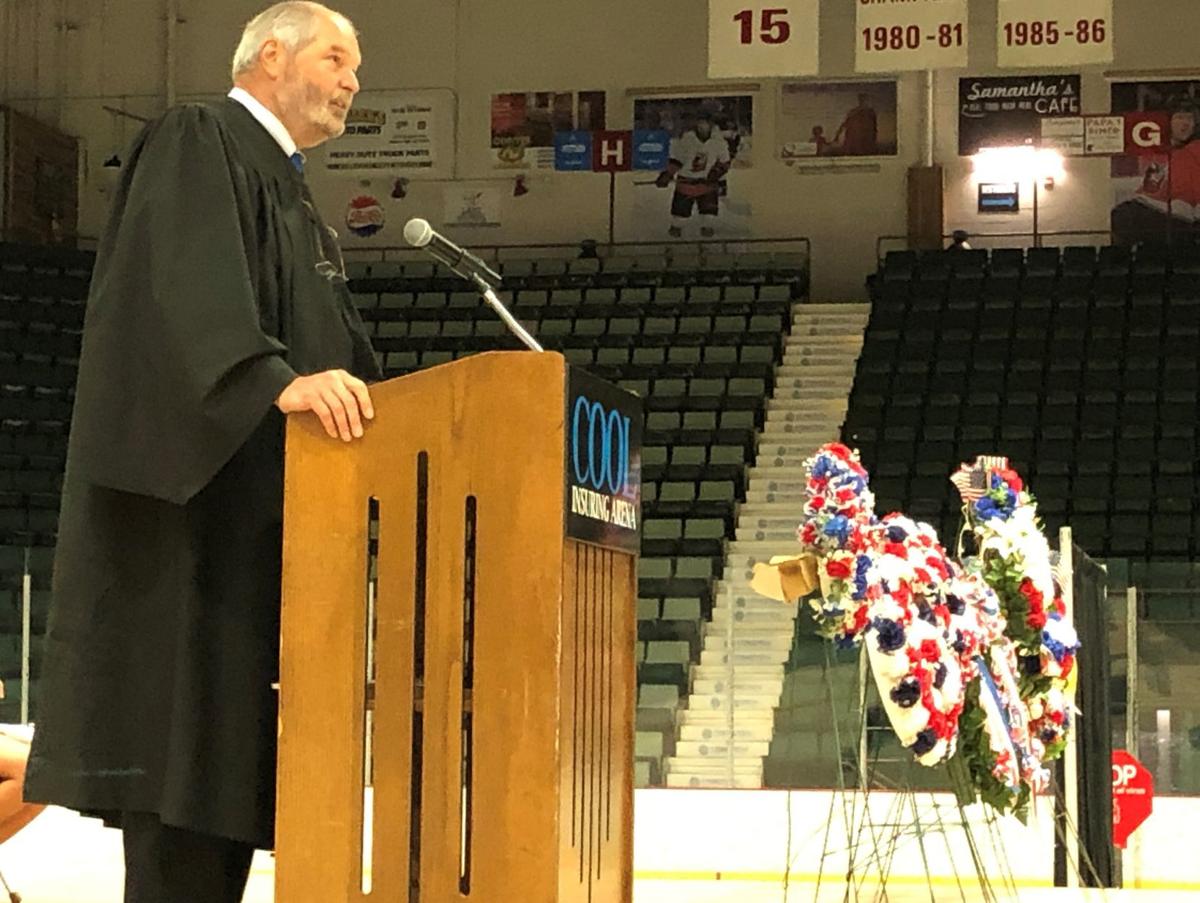 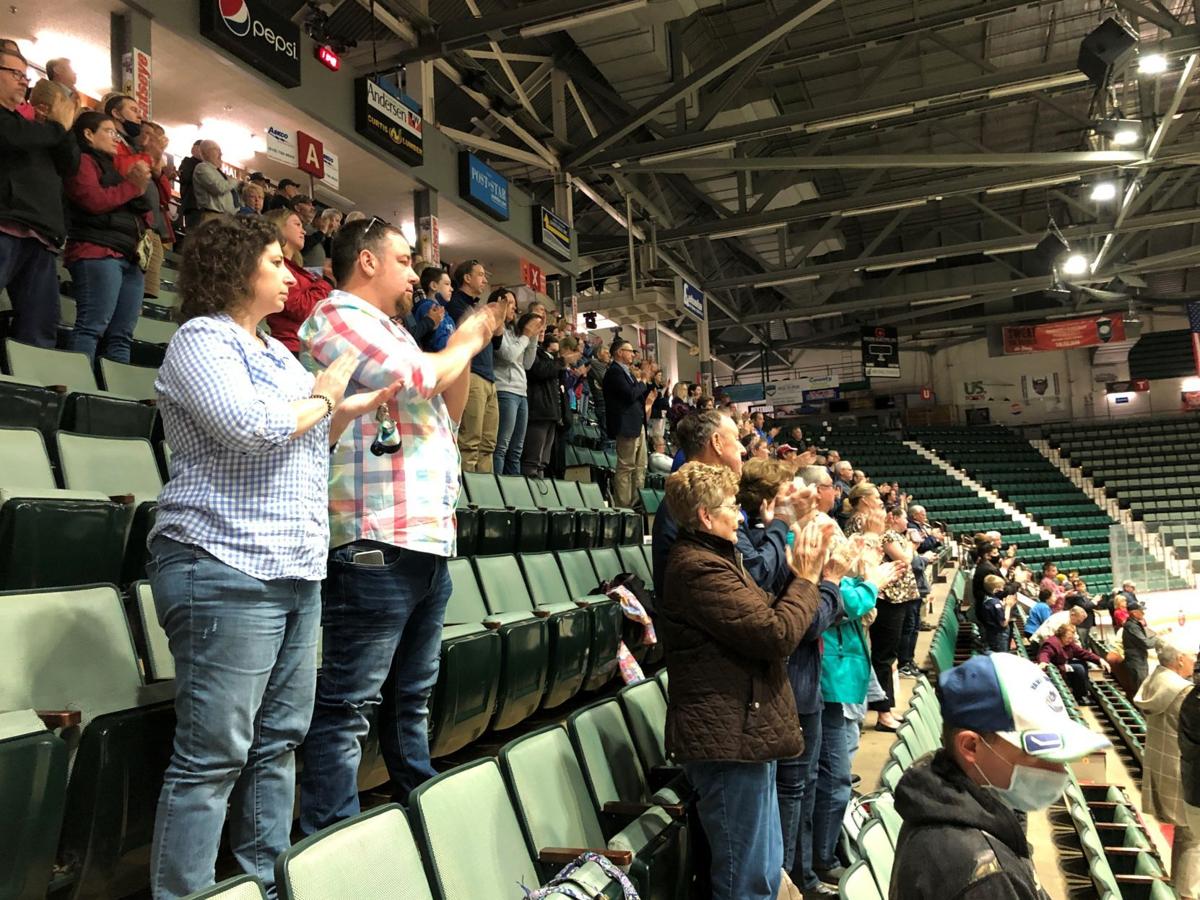 Making every day Memorial Day was the common theme for speakers at commemoration events on Monday.

“Every day we remember their honor, their valor, their deeds,” said Queensbury Supervisor John Strough at the 20201 Memorial Day remembrance ceremony at Cool Insuring Arena in Glens Falls.

The event, which is organized by Queensbury and Glens Falls, was supposed to be a parade, but it was canceled for the second consecutive year because of the COVID-19 pandemic.

Warren County Supreme Court Judge Robert Muller, who was the keynote speaker, read off the names of some local men who died in combat.

“We have not been tasked with making the extreme sacrifice that they did, but we can always offer support,” he said.

The list included Cpl. Benjamin Osborn, of Lake George, who was killed in 2010 in Afghanistan, and South Glens Falls native Pfc. Nathan Brown, who died in 2004 when his unit was struck by a rocket-propelled grenade in Iraq.

“A nation that can produce such wonderful men as these is a force for good,” Muller said.

State Sen. Dan Stec, R-Queensbury, said it was nice to see people’s mouths and noses, as most attendees were unmasked. He was thankful for that, but also thankful for the sacrifices that local servicemen and servicewomen and their families have made.

Stec said those who have lost loved ones in war have to live with that pain every day — not just on Memorial Day.

He called on everyone to just take a moment out of every day to remember them and honor them. And he called on people to be civil to one another.

“We disrespect the fallen when we behave in a way that is unworthy of their sacrifice,” he said.

U.S. Rep. Elise Stefanik, R-Schuylerville, said she is proud that she represents a district that is home to so many military personnel, including at Fort Drum in western New York.

“Never forget that we live in the land of the free — because of the brave,” she said.

The grand marshals for the event were Lawrence DeMass and Joyce Flower.

DeMass served in Vietnam. Glens Falls Mayor Dan Hall, who is his neighbor, said DeMass was shot down twice and led an effort to rescue 33 soldiers that were caught in a monsoon.

Joyce Flower served in the Glens Falls Naval Reserve and as a nurse at Bethesda Naval Hospital during the Gulf War. She works as a nurse at Irongate Family Practice Associates.

Strough also took a moment to recognize Erika St. John, a Hudson Falls resident who was liberated from a Nazi work camp.

Elected officials and veterans placed wreaths on the stage to mark the fallen.

In the afternoon, a plaque dedication ceremony was held at the Victory and Peace Monument in Crandall Park. American Legion Post 233 added 75 new names of local veterans to the memorial’s wall. Fosco, vice commander of the American Legion, said this brings the total names to about 2,000.

This story was corrected on June 4 to note that Erika St. John, a Hudson Falls resident, was liberated from a German work camp, not a concentration camp, in World War II.

Harriet Rogers, of Glens Falls, looks at the new names that were added to the monument in Crandall Park, which were unveiled in a ceremony on Memorial Day. Rogers served in the women's branch of the U.S. Coast Guard during World War II.

The Queensbury High School Band, under the direction of Jim Cirillo, perform at the Glens Falls-Queensbury Memorial Day remembrance ceremony on Monday at Cool Insuring Arena.