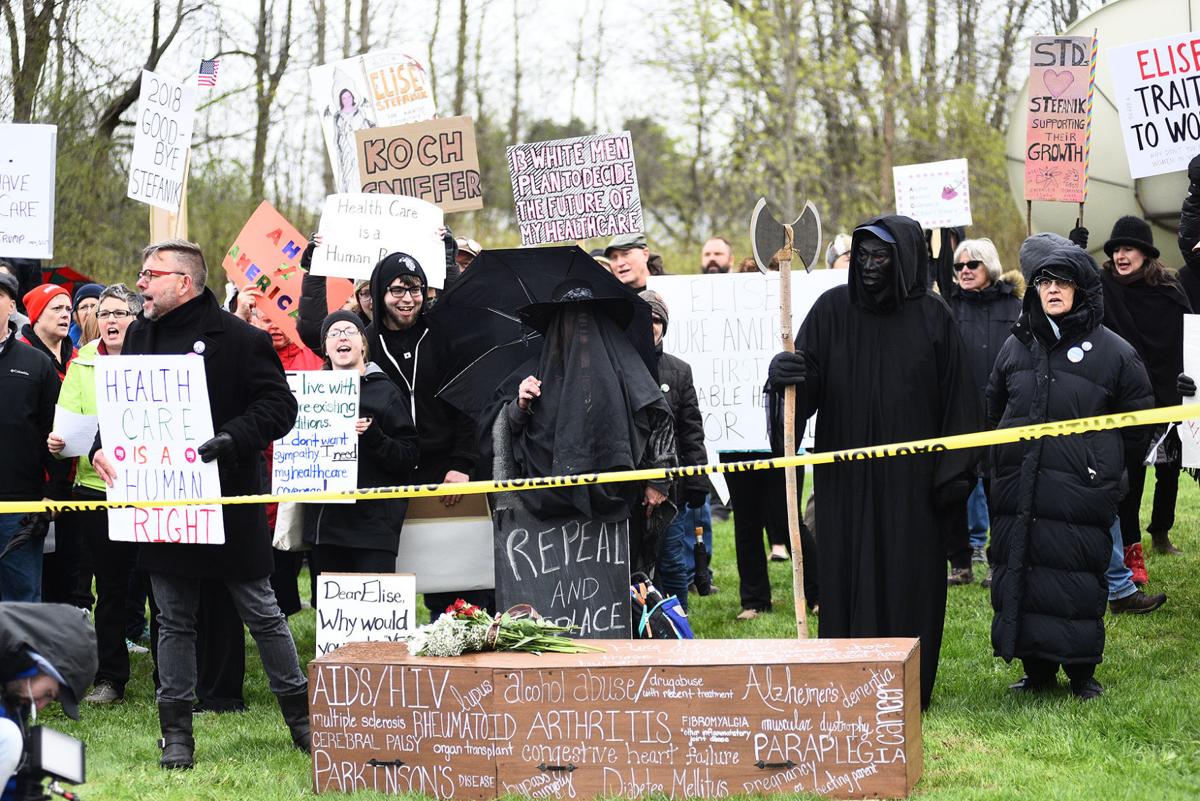 Around 200 people gathered on the lawn of Mountain Lake PBS on Monday evening before U.S. Rep. Elise Stefanik’s TV forum appearance. Many spoke out against her decision to vote in favor of the American Health Care Act. 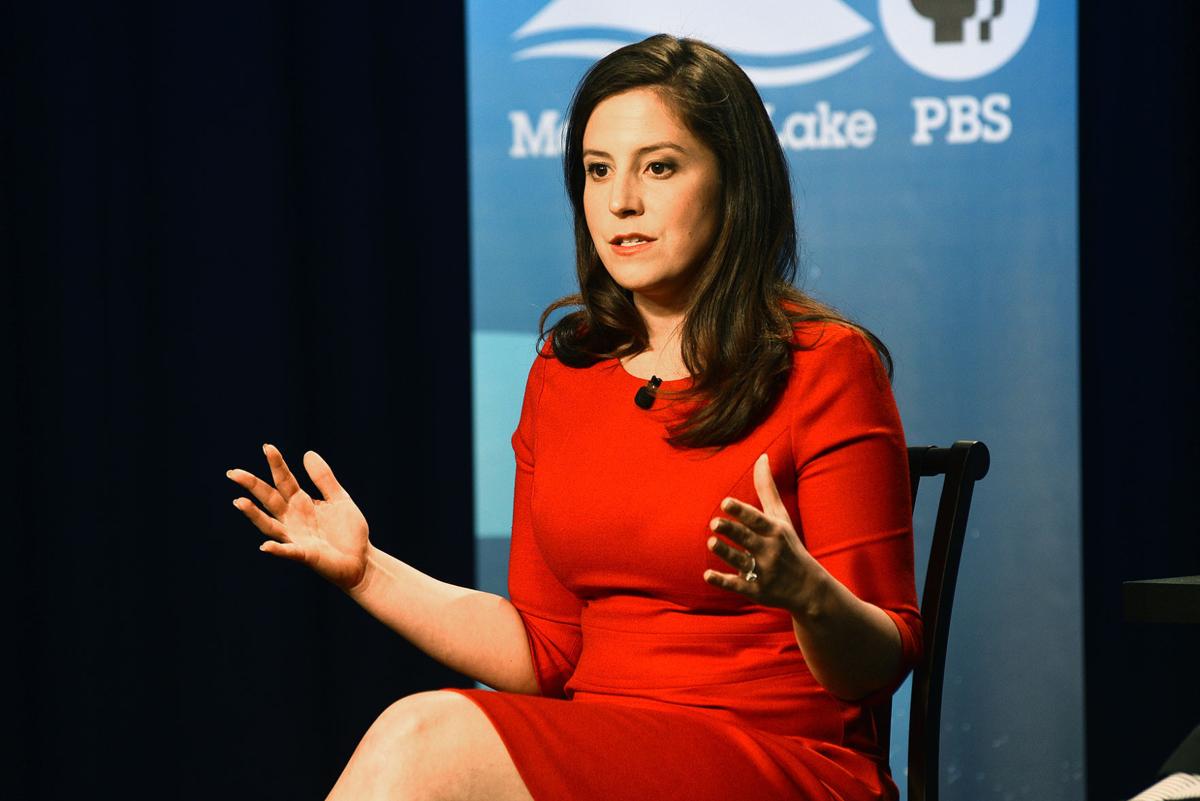 U.S. Rep. Elise Stefanik, R-Willsboro, answers questions from a studio audience during a community forum Monday evening at Mountain Lake PBS in Plattsburgh. Congress should have waited on CBO before voting on the new healthcare bill.

Last Thursday, by a narrow margin, congressional Republicans passed the American Health Care Act, which will replace the Affordable Care Act if the legislation passes the Senate.

In a live-streamed town forum hosted Monday evening by Mountain Lake Public Broadcasting in Plattsburgh, Rep. Elise Stefanik, R-Willsboro, answered questions from constituents picked by a lottery, regarding her vote in favor of the AHCA.

“We need better plans and better choices,” Stefanik said to a group of 100. “We deserve better, lower-cost health care.”

Estimates from the Congressional Budget Office on an earlier version of the bill reported that 24 million people would lose coverage and premiums would increase up to 20 percent until 2020. After 2020, the CBO projects that premiums could decrease by about 10 percent. The CBO has not had time yet to review the current bill.

The forum was dominated by health care-related questions. The following analysis takes a closer look at issues raised in the forum:

Stefanik: “I voted to redirect and increase funding to Federally Qualified Health Centers. And there are a number of those in this district. We are advocating for women’s health. My position, I am pro-life with the exceptions of rape or incest of the mother.”

The AHCA reallocates federal funding from Planned Parenthood Health Centers to Federally Qualified Health Centers and adds $422 million in supplemental funding for these federal facilities. Additionally, with the Hyde Amendment, the AHCA will not cover any health plan or make available federal premium tax credits for plans that cover abortion services, beyond those for saving the life of the woman or in cases of rape or incest.

New York state requires that health plans cover abortions and contraceptive services. Gov. Andrew Cuomo said in a statement last week the Republican health care bill “punishes New Yorkers” because it prohibits the use of tax credits to support the purchase of insurance plans that cover abortion services. As a result, the bill would force 685,000 low-income people, half of whom are women, to lose their insurance and deny them $1.5 billion in tax credits, he said.

While Stefanik said the redirection of funds to federal health centers would offer better care for her constituents, The New York Times reported in March that one in five counties served by Planned Parenthood nationally have no such health centers, forcing patients to drive an hour or more for routine health care at already overburdened health centers.

Because the federal health centers are sparsely scattered in the most rural locations of New York’s North Country, residents may have to travel 45 or 50 miles to receive care at a qualified facility or travel into Vermont. For someone who lives in Saranac Lake, for example, the closest center would be about 35 miles away. Saranac Lake has a Planned Parenthood clinic.

About 12 percent of Planned Parenthood health services go to abortions, and, as prohibited by law, no federal funds are used for these services, according to FactCheck.org of The Annenberg Public Policy Center.

Stefanik: “There is language in the AHCA that prohibits insurers from not accepting people with pre-existing conditions and it does not allow insurers to increase prices.”

Removing protections for people with pre-existing conditions will result in the sick paying high premiums and would force those who cannot afford it to lose coverage, according to analysts. Someone now paying $2,000 a year could face a premium 10 to 20 times higher.

Backers of the AHCA say states will offer high risk pools to cover such increases or they will not be approved for the waiver, and the AHCA provides $138 million over 10 years for these pools. An additional provision of $8 billion over five years was added just before the AHCA vote.

Lawmakers contend that only those who have a 63-day lapse in coverage would face a 30 percent increase in premiums that could last for one year.

But an analysis by the Brookings Institute found that everyone with pre-existing conditions would be at risk in states that opt for the waiver.

An AARP analysis found that premiums in such pools could reach unaffordable levels — as much as $25,700 a year in 2019. In the past, high-risk pools have put such an onerous financial burden on states that insurance benefits were scaled back and enrollment in them was capped, according to AARP analysts.

Stefanik: “I want to address the misinformation; there are no cuts to traditional Medicaid, only to expanded Medicaid. We are going to a traditional 50/50 match instead of a 90/10 match. This modernizes Medicaid.”

Additionally, the AHCA requires a six-month renewal review for the expansion population. And it repeals mandatory coverage for children 6 through 18 with family incomes above 100 percent of the federal poverty level.

According to the AHCA, states have the option to require work as a condition of eligibility for Medicaid enrollees who are not disabled, elderly or pregnant, as of Oct. 1.

The Congressional Budget Office estimates that there will be about 14 million fewer Medicaid enrollees.

In other issues at the forum, Stefanik said that tax credits under the AHCA would lower costs.

Currently, the ACA offers enrollees a tax credit that can be taken on their tax return or applied to their premium. It is a complex algorithm that takes into account age and where people live.

According to analysts at Kaiser Family Foundation, this is a reduction in credit for the lowest-income individuals who live in more costly areas of the state.

Looking back at local history: May 11

Take a look back at local history. Here are the top stories for May 11 from one, five and 10 years ago.

Protesters, for and against, show up for Rep. Stefanik's town hall forum

PLATTSBURGH — Mike Trudo once supported Rep. Elise Stefanik, but on Monday evening he joined a large crowd on Sesame Street to speak out against her.

Around 200 people gathered on the lawn of Mountain Lake PBS on Monday evening before U.S. Rep. Elise Stefanik’s TV forum appearance. Many spoke out against her decision to vote in favor of the American Health Care Act.

U.S. Rep. Elise Stefanik, R-Willsboro, answers questions from a studio audience during a community forum Monday evening at Mountain Lake PBS in Plattsburgh. Congress should have waited on CBO before voting on the new healthcare bill. 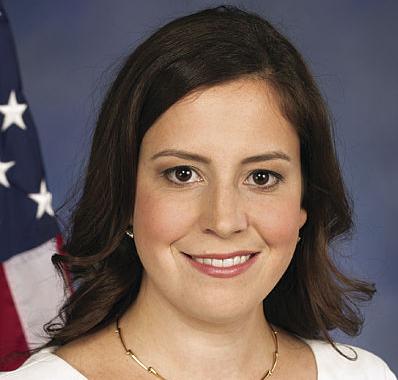