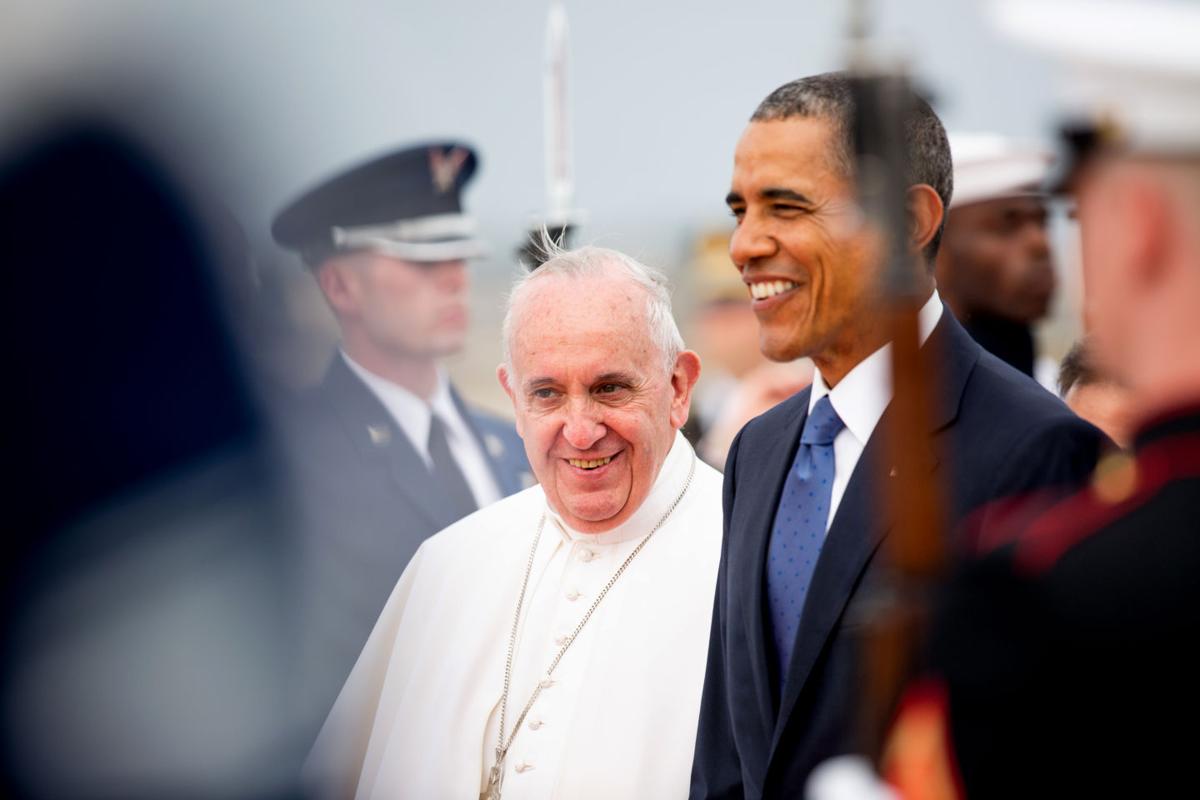 President Barack Obama walks across the tarmac with Pope Francis upon his arrival at Andrews Air Force Base, Md., on Tuesday. 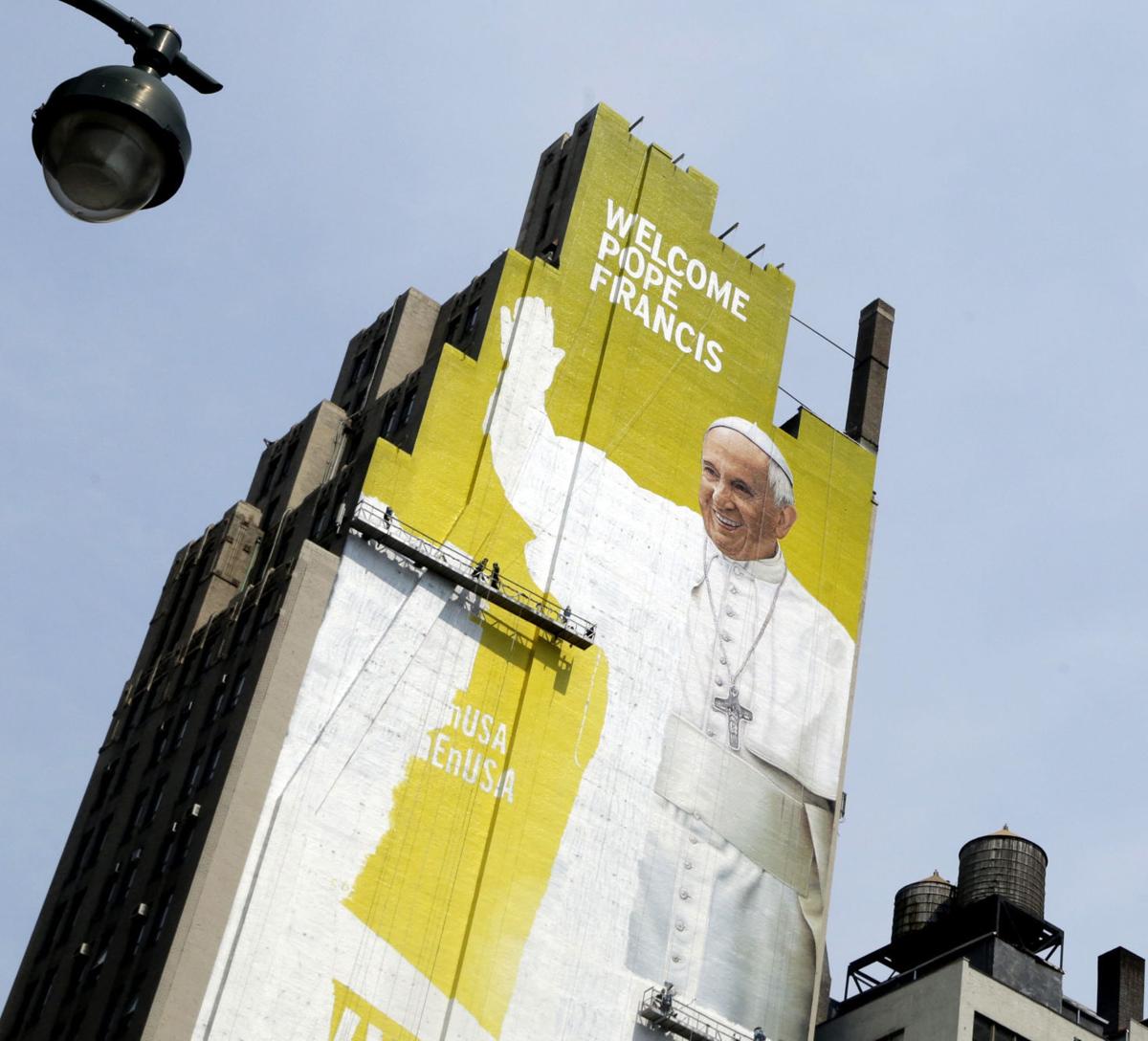 People from area churches will be among those who get to see Pope Francis when he delivers Mass on Friday at Madison Square Garden in New York City. Here, a mural in the city celebrates the upcoming visit.

Joan Ouellette of Warrensburg almost didn’t put her name in for a ticket to see Pope Francis lead Mass at Madison Square Garden on Friday.

“I thought about it for a minute, but you know all the negatives that go through your mind,” she said. “But as we were leaving church, a friend asked me if I was going to try, and I decided to put my name in. I think I was one of the last people to fill out a slip of paper.”

As it turned out, she was the first person Sister Linda Hogan of St. Cecilia’s called to offer the parish’s ticket.

“Sister Linda asked, ‘Do you want to see the pope?’ I didn’t say anything for a minute, then I said, ‘Oh my God. Yes. I want to,’ “ said Ouellette.

Friday morning, she will be meeting representatives from churches in Chestertown and Johnsburg and riding with them to the Amtrak station in Rensselaer, then to New York for the 6 p.m. Mass at Madison Square Garden.

“I am so excited, I can hardly believe it,” she said.

Ouellette is one of two people going from St. Cecilia’s and among several dozen making the trip from the area’s churches.

Mary De Turris Poust, communications director for the Albany Diocese, said the diocese received 200 tickets for the Mass, reserved 50 of those for a busload of students, then gave each of the 126 parishes a ticket.

A total of 175 students applied for the tickets, including Jim Cunniffe, a sophomore at Warrensburg, who will be able to share his experience with Ouellette the next time the two are at Mass.

“I was a little surprised, because so many people entered the drawing,” he said of having his name drawn. “Mainly, I saw it as a great opportunity if I got chosen, and it’s a great way to strengthen my faith.”

According to Poust, who saw Pope John Paul II when she was a senior in high school, other local students going on the trip include Jonathan Marchello of Lake George, Eric Fields and Lucas Steele of Schuylerville, Derek Proper of Mechanicville and Grant Mundrick of Chestertown.

“I just went into church one morning, and my priest suggested I put my name in,” said Marchello, who admitted he has not been following the pope as carefully as he might. “But my family is very religious, and they have told me a lot about what he’s been doing, especially my grandmother.”

The bus will be leaving from Albany Friday morning with three adult chaperones and will return early Saturday morning.

Father Joseph Arockiasamy of Granville said he got a quick request from a parishioner, Lisa Birchmore.

“She said she was longing to go,” Father Joe said. “We had the one ticket, so I gave it to her.”

Other local residents who are planning to attend the Mass are Nancy Gordon from Whitehall and Maureen Barber from Fort Ann.

The Rev. Edward Scharfenberger, bishop of the Albany Diocese, will be attending the papal visits in both Washington, D.C., and New York.

Father Donald Rutherford, who is the moderator of the curia for Albany Diocese and was U.S. Army chief of chaplains until May, is expected to be among those at the White House.

Scharfenberger and Albany’s Bishop Emeritus, Howard Hubbard, are expected to be among hundreds of New York priests saying the Mass at Madison Square Garden with the pope.

More than 20,000 people will be at the Madison Square Garden Mass, with tickets going out through local dioceses. Church officials said they kept the New York celebrations smaller than they could have been so the focus of the weekend would be on Philadelphia.

When the pope speaks to a joint session of Congress on Thursday, each legislator is allowed a guest.

The pope arrived Tuesday in Washington, D.C., and will spend Wednesday at the White House and taking part in the canonization Mass for Junipero Serra at the Basilica of the National Shrine of the Immaculate Conception.

Thursday, after the joint session of Congress, he will visit various sites, then go to New York, where he will attend evening prayer at St. Patrick’s Cathedral. Bishop Scharfenberger is expected to be there for vespers.

Friday will include visits to the United Nations, the 9/11 Memorial and Museum and then the evening Mass.

Saturday, he travels to Philadelphia for the centerpiece of the trip, which will include two days of events. The trip, which began with several days in Cuba, ends when he heads back to Rome on Sunday night.

President Barack Obama walks across the tarmac with Pope Francis upon his arrival at Andrews Air Force Base, Md., on Tuesday.

People from area churches will be among those who get to see Pope Francis when he delivers Mass on Friday at Madison Square Garden in New York City. Here, a mural in the city celebrates the upcoming visit.