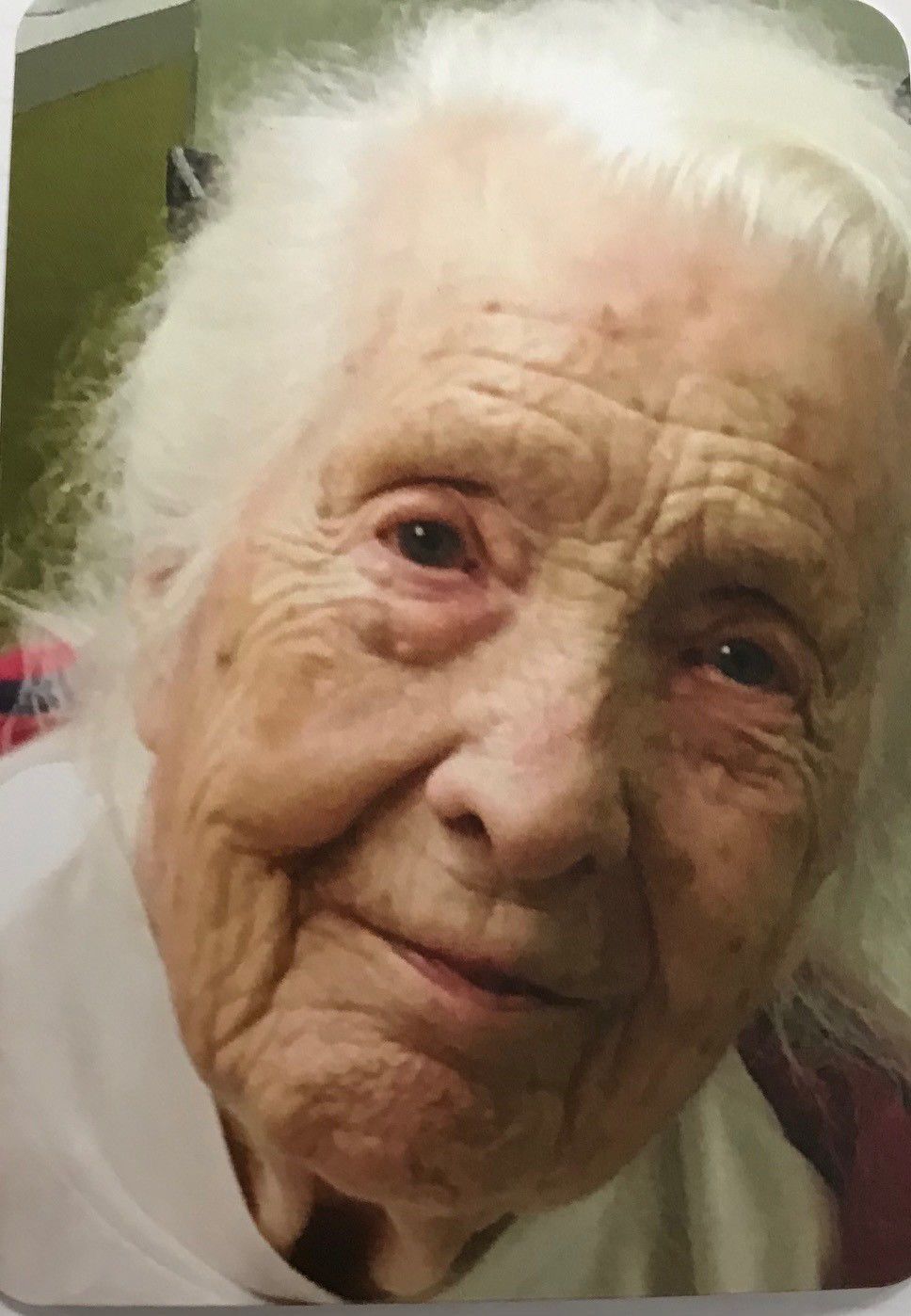 Lila Walter, 106, survived coronavirus without any noticeable symptoms and has returned to her role as "Queen of Warren Center." 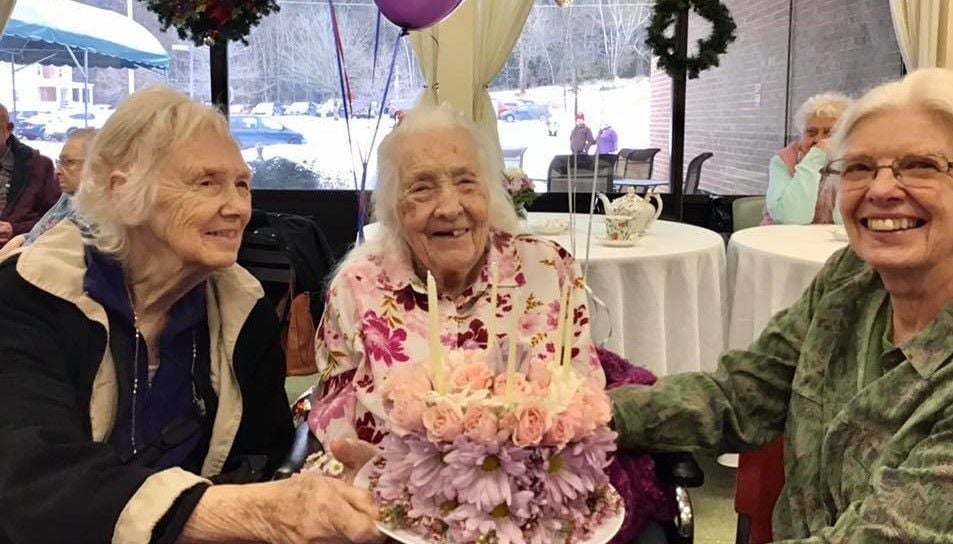 Hannah Delila “Lila” Walter of Thurman, center, celebrates her 105th birthday in 2020 at the Warren Center nursing home on Gurney Lane in Queensbury. She was joined by daughters Laurona Dibble, left, and Anne Rohe, right. 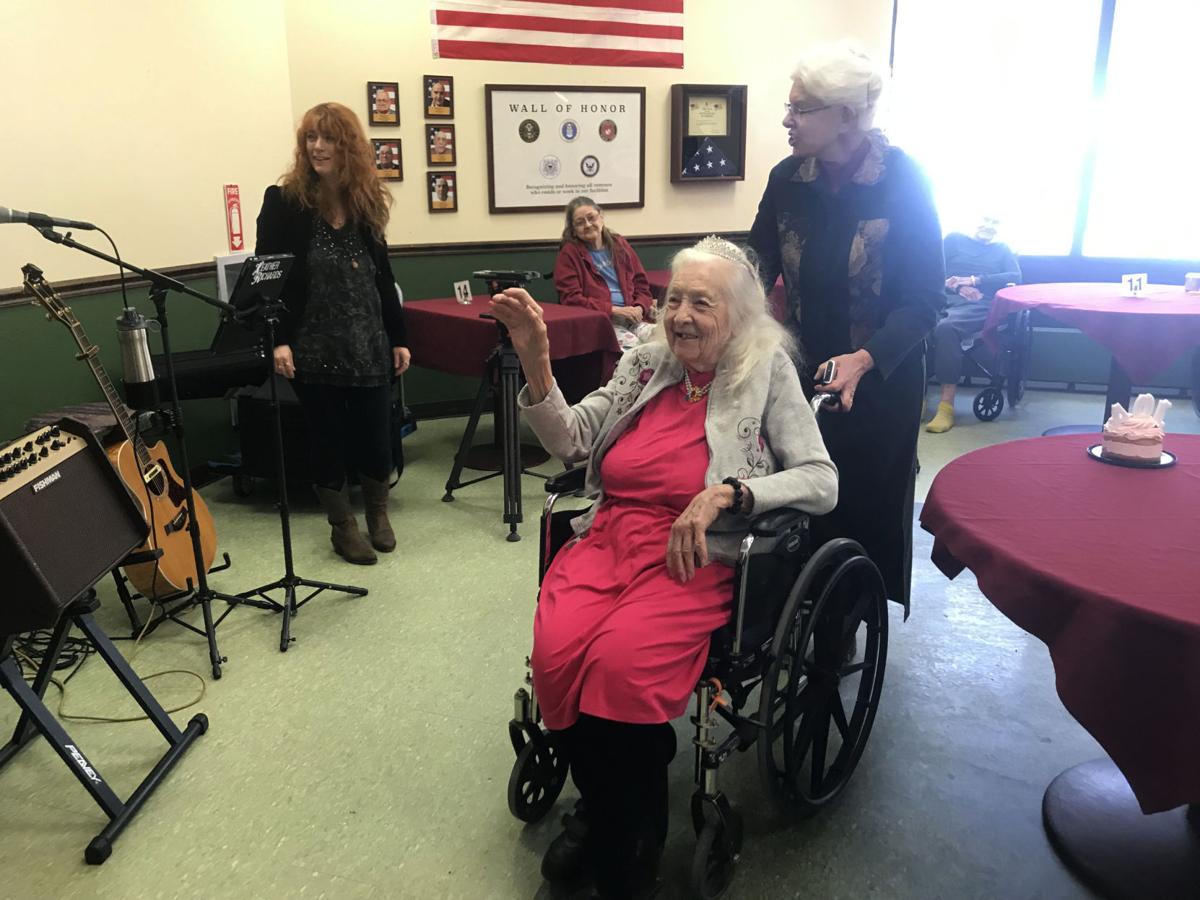 Warren Center resident Hannah Delila Walter waves goodbye from her 104th birthday party in Queensbury in 2019. She is pushed by her daughter Anne Rohe as musician Heather Richards watches.

QUEENSBURY — Lila Walter, 106, was not impressed by the coronavirus.

When the former Thurman resident tested positive at Warren Center in Queensbury, the nursing home quickly moved her to isolation. But she never had any noticeable symptoms.

So, to her, the virus was mainly an imposition to her people-loving life.

“It was terrible. I felt like I’d been worse than in a jail,” she said of her quarantine.

It was the injustice of it all that bothered her. Last year, when the pandemic began, she organized a petition drive to demand that residents be allowed back outside into the courtyard. Initially, everyone was kept in their rooms to keep people from congregating.

She called her daughter Ann Rohe, of Thurman, but not to complain.

“She called me and asked me to write up a petition,” Rohe said in a tone of disbelief. “They all signed it and they got to go out there for a while."

It wasn’t the first petition drive Walter had ever run. It wasn’t even the second one.

“She’s an amazing person,” Rohe said. “She got petitions to get a phone line to Walters Trading Center.”

Walter and her husband opened the store, in Thurman, and used the petitions to get a phone line run to the store.

When Walter was 40, her husband Loren died of a heart attack at a fire, where he was working as a volunteer firefighter. On her own, Walter opened the first private campground in Thurman, called Glen Hudson, along the Hudson River. She turned to petitions again.

“That’s how she got electricity run to the campsite,” Rohe said, adding that when her mother was frustrated by the limits at the nursing home during the pandemic, it was natural to think back to her previous petition successes.

Walter also urged her children to ignore another pandemic rule. She wanted them to sneak in so they could visit her.

Although Walter remembers her past and can describe her life in detail, she can’t quite understand why no one is allowed to visit indoors. She believes her children have decided not to come in, and she’s quite hurt by it.

But Rohe, 72, trudges through the snow along the side of the building to get to her mother’s window.

Walter’s other daughter, Laurona Dibble, is in her 80s, lives in Florida and in visits can’t make it through the snow. That’s hard on Walter, who doesn’t understand why one daughter can wave from the window, but won’t come in, and the other doesn’t even come to the window. Aides at the nursing home keep trying to explain. It is a common misunderstanding among nursing home residents, and one of the many heartbreaking things about the pandemic.

For her birthday last year, both daughters were able to come, and aides keep reminding her of that and reassuring her that her children love her.

Walter is not the type of person to passively accept problems. When she struggled to hear during a Zoom interview with a Post-Star reporter, due to a malfunctioning hearing aid, she said calmly that she would simply tell the story of her life and hope that it answered whatever questions anyone had wanted to ask.

“I’m afraid I’m giving a boring interview,” she said, just after describing how she befriended a Japanese student after World War II and sponsored him at her home for about six years.

That started when Rohe, in high school at the time, was assigned a pen pal from Japan. They wrote back and forth for some time, and then his father wrote to Walter to say that the boy would like to come to the United States but could not do so without a sponsor. She offered to sponsor him, and he attended Warrensburg High School while working at her campground in the summers.

The boy had a bit of a shock when he arrived and met Rohe.

“She’d never written that she had a boyfriend over here, so he thought she was looking for a boyfriend,” Walter said with a laugh. “But that was not the case. He was very interested in her but she wasn’t interested in marrying him.”

He stayed anyway. He had already graduated from high school in Japan but wanted to practice his English, so he enrolled at Warrensburg High School, Rohe said.

Some neighbors weren’t thrilled by his arrival, Walter said.

“She (Rohe) wasn’t prejudiced but a lot of the people who lived around us were” because a “very dear friend” in the area had been killed by the Japanese two decades earlier during World War II, she said.

“When he went back to Japan, his mother wrote me a nice letter,” she continued. “She invited me over to her place and I went.”

She spent a month in Japan during the World’s Fair in 1970. The boy’s parents took her all over the country, showing her many of the most popular sights.

Walter also worked as a teacher in a one-room schoolhouse, first in Thurman and then in Johnsburg. She got her teaching certificate at Oneonta Normal School (which became SUNY Oneonta).

“The first year that I taught I had 32 pupils in all eight grades,” she said. “I always thought I wanted to be a teacher, but when I had 32 children in eight grades I was inclined to change my mind.”

Later, she took a teaching job in Johnsburg, where she only had eight students, which she much preferred. Still, she only taught for about eight years.

At Thurman, one of the 32 students was her 4-year-old daughter, who came to work with her and thus started school early.

She can’t remember the polio epidemics that hit during her children’s childhoods, nor can she particularly remember what vaccines she got over the course of her long life. After getting coronavirus, she declined the vaccine. After all, she had survived it without any symptoms.

And now she is free to demand justice for her fellow residents whenever necessary.

They love her. During the pandemic, they crowned her “Queen of Warren Center.”

See what is happening around the region and look back at past events.

QUEENSBURY — One of Hannah Delila Walter’s first memories is of young men returning from World War I.

Families can now visit their loved ones in nursing homes in almost all cases, Gov. Andrew Cuomo announced in a news release Thursday evening.

Lila Walter, 106, survived coronavirus without any noticeable symptoms and has returned to her role as "Queen of Warren Center."

Hannah Delila “Lila” Walter of Thurman, center, celebrates her 105th birthday in 2020 at the Warren Center nursing home on Gurney Lane in Queensbury. She was joined by daughters Laurona Dibble, left, and Anne Rohe, right.

Warren Center resident Hannah Delila Walter waves goodbye from her 104th birthday party in Queensbury in 2019. She is pushed by her daughter Anne Rohe as musician Heather Richards watches.