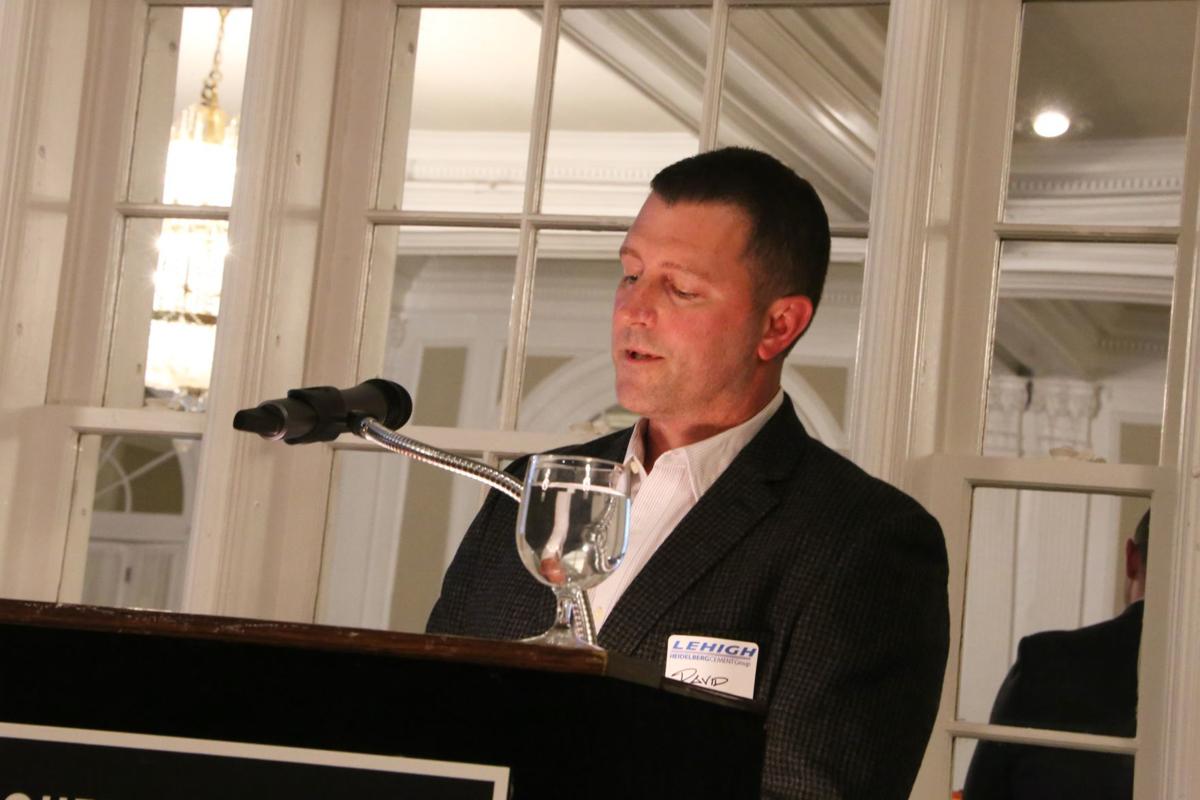 Dave Dreyer, plant manager of Lehigh Cement Co. in Glens Falls, kicks off a presentation about the plant's proposal to burn raggertail Wednesday night at The Queensbury Hotel. 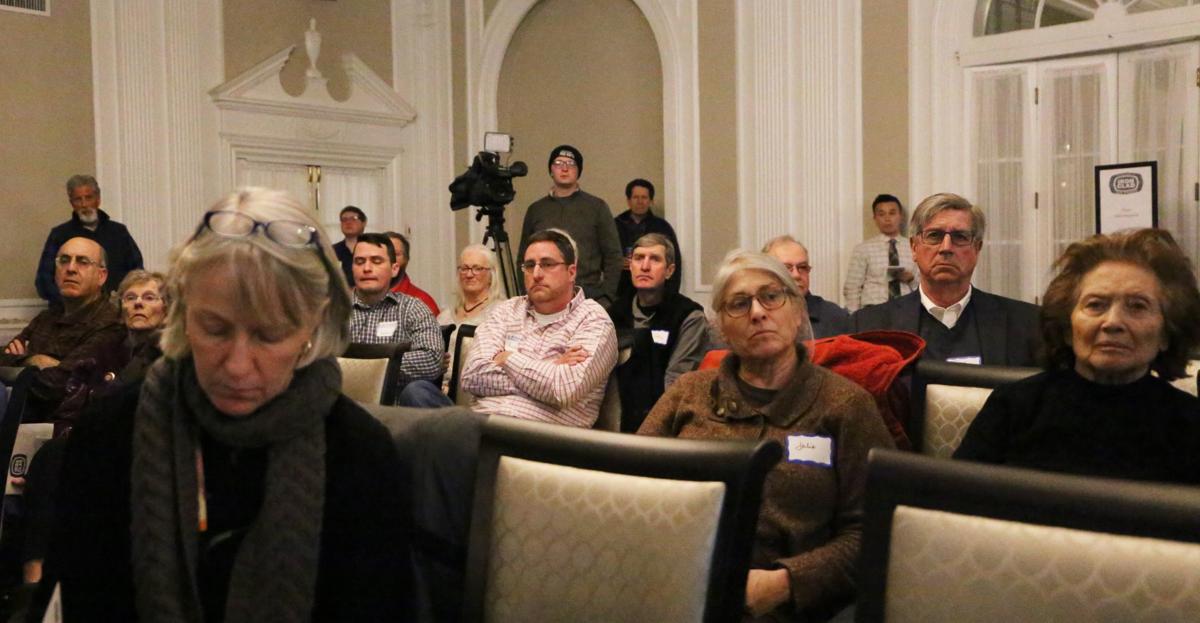 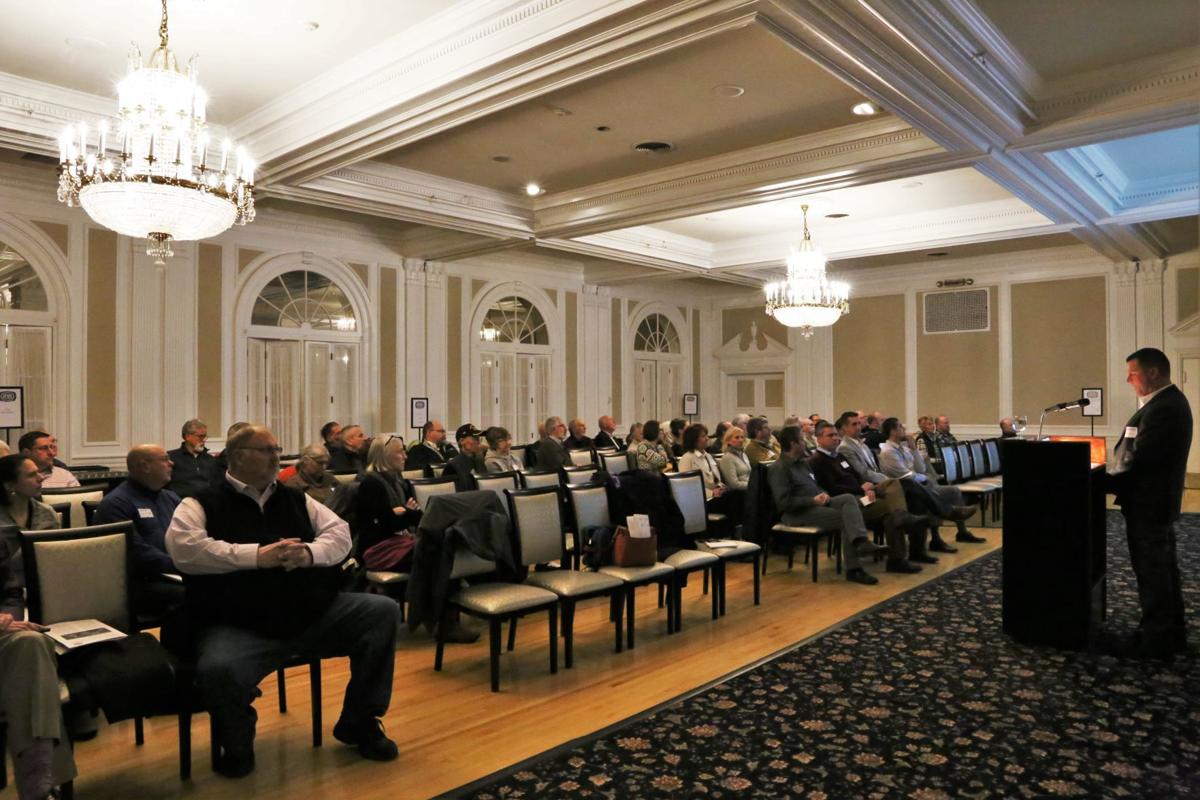 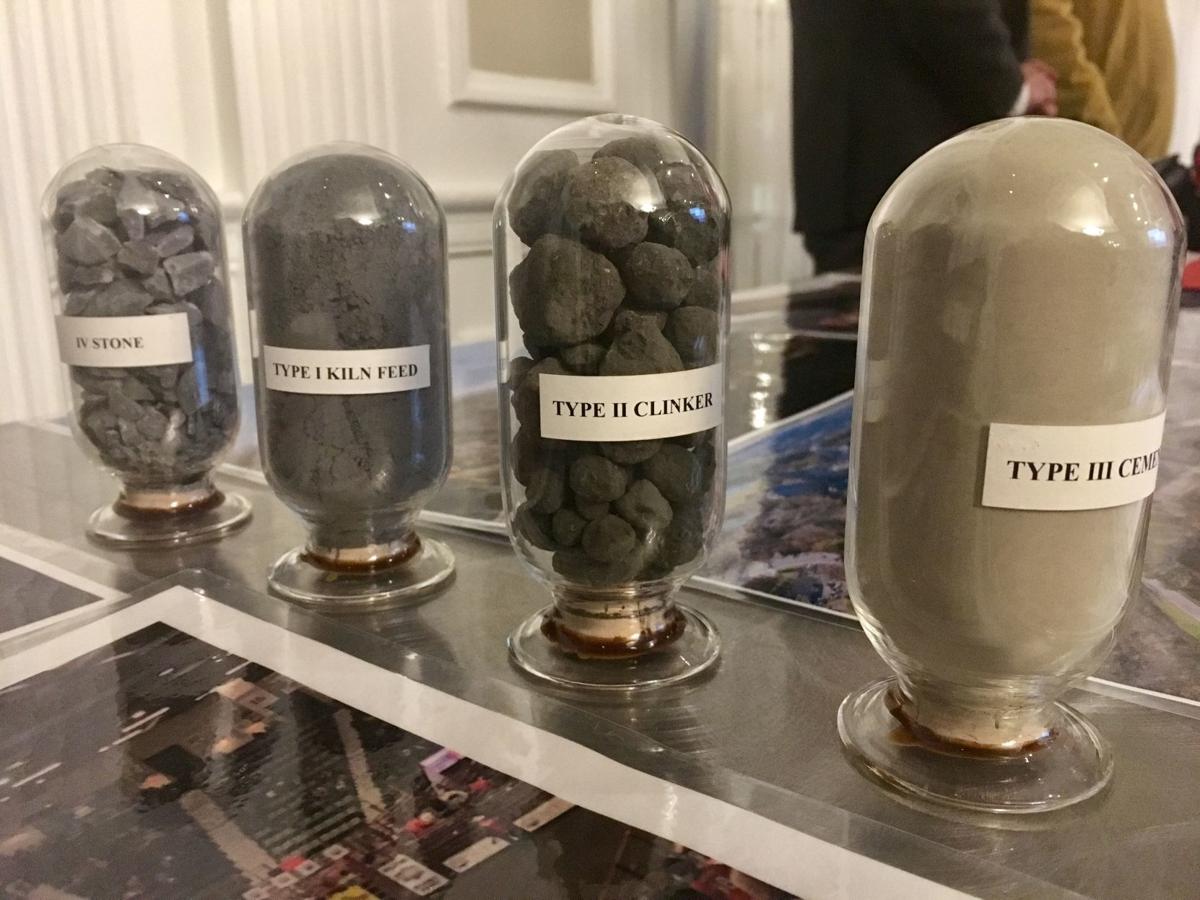 From left to right, the process of how limestone turns into cement is shown at an information table during Lehigh Cement Co.'s meeting Wednesday at The Queensbury Hotel. 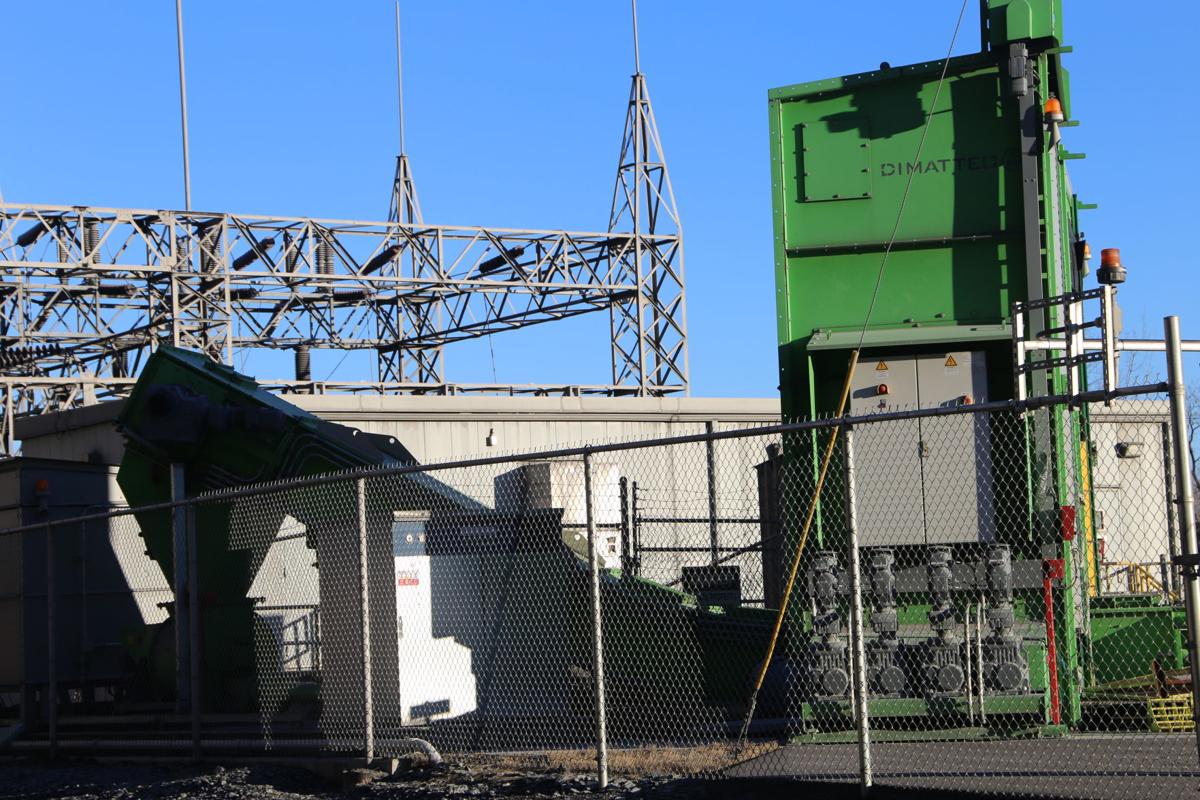 A loading area is seen on Dec. 4 where raggertail could be deposited and transferred to Lehigh Northeast Cement's kiln. The cement plant already burned the paper and plastic mixture during a trial run last year.

Postponed last month due to the weather, the long-awaited meeting hosted by Lehigh Cement Co. at The Queensbury Hotel provided local lawmakers and residents an overview of a proposed update to the company’s air emissions permit.

The presentation was not followed by an open question-and-answer forum, but rather stations were set up for the audience to disperse and ask their questions to individual experts.

GLENS FALLS — Lehigh Northeast Cement Co. will hold a public meeting on its proposal to burn raggertail as fuel, and the company has come out …

Plant Manager David Dreyer kicked off the presentation, explaining the company’s 125-year history in Glens Falls. Showing an aerial photo of the plant, he said it covers two counties and three towns, with its quarry in Moreau and the plant straddling Queensbury and Glens Falls.

Just one of two cement companies in the state, Lehigh makes about 560,000 tons of cement each year.

An assembly of employees from the Glens Falls plant and from Lehigh’s parent company, Heidelberg Cement Group, were also present.

In from Dallas, Environmental Director for Heidelberg Cement Group Adam Swercheck talked about the plant’s emissions controls and regulations.

Lehigh has been looking at raggertail, a 60 percent plastic and 40 percent paper alternative fuel, since 2016. Swercheck held up a cardboard box with some tape around it to show the audience what the material looked like before it’s processed. Audience members could then see at the breakout session tables examples of the confetti-like scraps that cardboard box is turned into.

In 2017, the plant invested in an alternative fuel handling system, allowing trucks to pull up and directly dump the raggertail with no outside handling required. It then moves through the enclosed system to the kiln, where it is mixed with either natural gas or coal as part of the kiln heating process.

Swercheck said the plant expects about 15 percent of its overall fuel mix to be raggertail, should its air permit revisions be approved by the state Department of Environmental Conservation.

A 2017 study done by a third-party environmental testing firm showed the use of raggertail continued to keep the plant’s emissions below state and federal allowable limits.

While some have expressed concern over dioxin levels, cement company staff explained that the kind of plastic burned in the process is not coated in chlorine, which is an ingredient in making dioxin. Dioxin is a toxin that causes cancer.

While the plant does emit low levels of dioxin and mercury, it comes from the limestone and coal, not from raggertail.

There are also several control measures the plant puts in place to minimize its air emissions, Swercheck continued. Some include the use of activated carbon to reduce mercury emissions and bags that collect dust.

Swercheck said several other of Heidelberg’s plants are currently using alternative fuel sources, some of which are more inconsistent than raggertail. The cement company continued to tout that the use of raggertail keeps the product out of landfills and helps reduce greenhouse gas emissions.

Some local lawmakers, including Queensbury Supervisor John Strough and Glens Falls 3rd Ward Councilwoman Diana Palmer, said they thought the meeting was helpful and answered many questions the public had.

Others, like Glens Falls Sustainability Committee member Tony Krivitksi, thought a lack of an open question-and-answer session was a “clever tactic” and kept the meeting from getting emotional.

“It does dilute, I think, what might have happened,” he said. “There’s obviously some people pretty uptight about it.”

During the meeting, a few questions were called out. Some audience members were given answers and some were asked to pose their question outside of the presentation. One audience member said she thought it would be better to hold a question-and-answer forum.

Another meeting attendee called out that the cement company was doing a good job and didn’t want an open forum because “we don’t want to be here all night.”

The DEC is still accepting comments on the proposal through March 15.

Lehigh's draft permit and modification application is available on its website at lehighhanson.com/reference/glensfallsnyaddendum or at Crandall Public Library.

Comments and requests for a public hearing must be submitted in writing to the DEC by March 15. Comments should be sent to Beth Magee, DEC Region 5 Warrensburg Sub-Office, 232 Golf Course Road, Warrensburg, NY 12885; or emailed to DEP.R5@dec.ny.gov.

Blog: Lehigh presentation was helpful, but missed the Q&A

Lehigh Cement Co. held its public informational meeting about raggertail Wednesday night. As a member of this community and a reporter, I thou…

GLENS FALLS — Lehigh Cement Co. will host a community informational meeting about its proposed changes to its air permit at 6 p.m. Wednesday i…

Lehigh Cement Company’s public informational meeting about its proposed air permit changes has been rescheduled to 6 p.m. Wednesday, Feb. 27 a…

GLENS FALLS — The public will have a chance to learn more about Lehigh Cement Co.'s proposal to burn a paper and plastic mixture at an upcomin…

Three municipalities are banding together to demand more information about the proposal to burn plastic at Lehigh Northeast Cement Co.

SOUTH GLENS FALLS — The Village Board is looking for partners in its quest to stop Lehigh Northeast Cement Co. from burning plastic.

GLENS FALLS — Local officials and residents, as well as the former administrator for the U.S. Environmental Protection Agency's Region 2, are …

Lehigh Cement Co., the EPA and the Department of Justice have reached a settlement following alleged Clean Air Act violations.

Dave Dreyer, plant manager of Lehigh Cement Co. in Glens Falls, kicks off a presentation about the plant's proposal to burn raggertail Wednesday night at The Queensbury Hotel.

From left to right, the process of how limestone turns into cement is shown at an information table during Lehigh Cement Co.'s meeting Wednesday at The Queensbury Hotel.

A loading area is seen on Dec. 4 where raggertail could be deposited and transferred to Lehigh Northeast Cement's kiln. The cement plant already burned the paper and plastic mixture during a trial run last year. 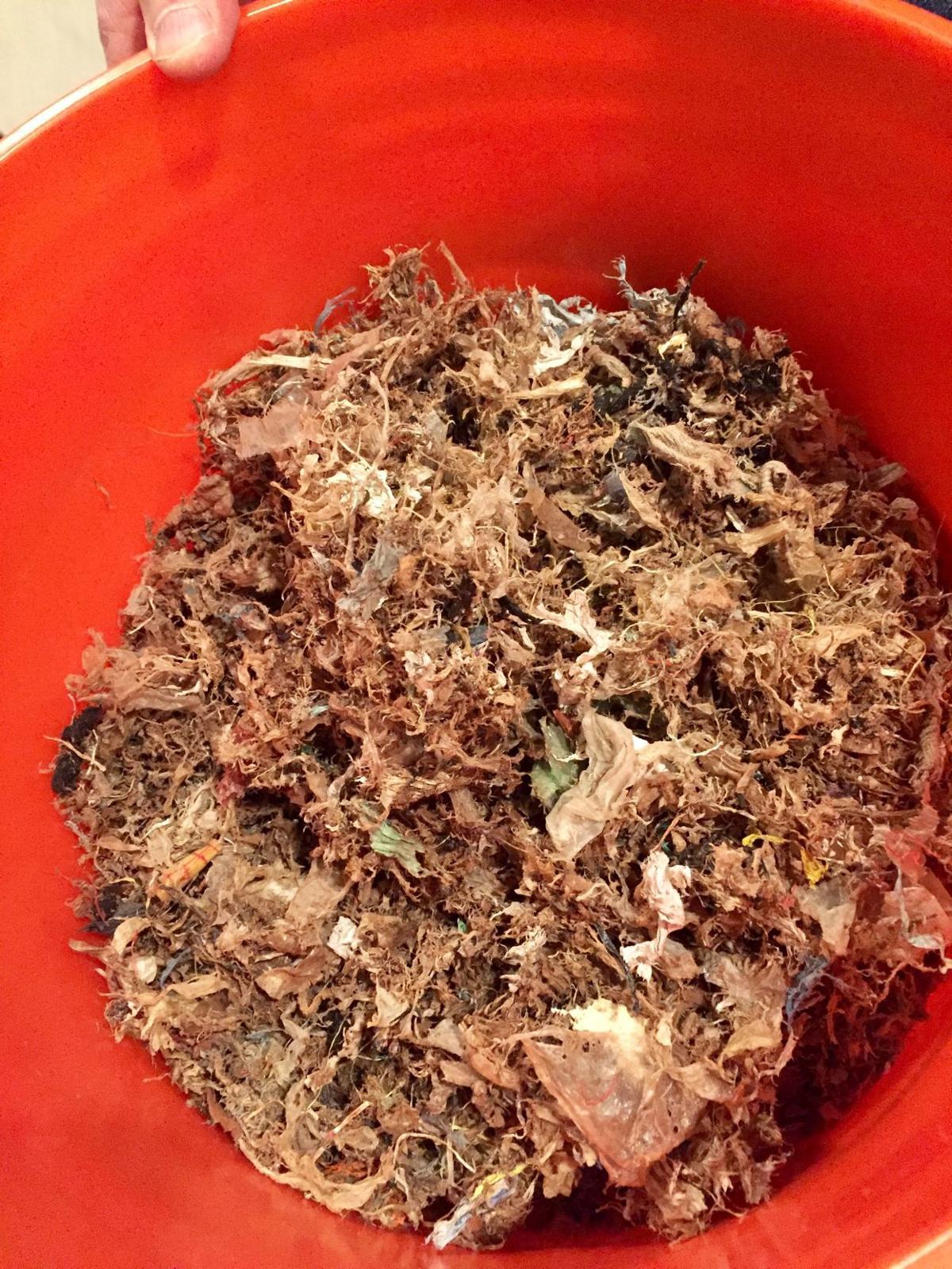