Washington County sheriff’s deputies ripped up and destroyed an entire field of licensed hemp plants, Toadflax Nursery alleges in a lawsuit filed against the department.

The lawsuit was filed Nov. 24 in state Supreme Court in Washington County. 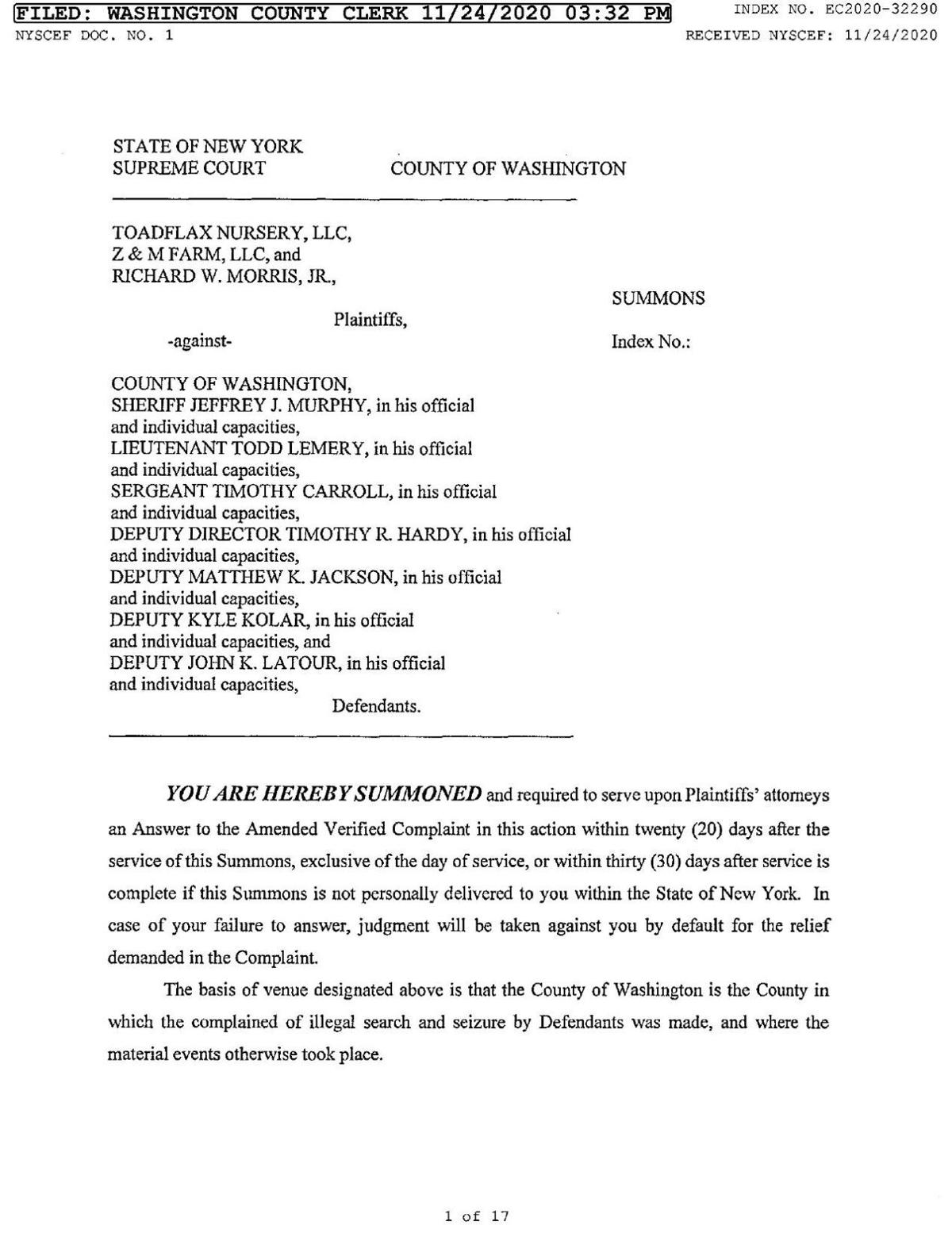 Toadflax owner Rich Morris did not return a call seeking comment, and Washington County Attorney Roger Wickes said his office has a policy of not commenting on litigation.

The paperwork describes an incident that occurred on Oct. 1, 2019, at a property off Route 43 in Kingsbury.

At 10 p.m., the deputies searched the field and ripped up 250 plants. All the plants were double-tagged with their state license number and listed Toadflax Nursery of South Glens Falls as the owner, according to the lawsuit.

Toadflax received a state license to grow hemp on May 24, 2019, and the Sheriff’s Office had been notified, according to the lawsuit. The department also has access to a database that lists licensed hemp growers, and Toadflax is listed on the state Agriculture and Markets website, the lawsuit notes.

The entire incident occurred at night, which could explain why the labels may have been overlooked. The lawsuit said the Sheriff’s Office should have better trained the deputies to be on the lookout for licensed hemp plants, and said deputies did not even ask the workers about the plants. The department also didn’t issue a warrant before removing the plants.

Toadflax filed a notice of claim with the department to cover the value of the lost plants, but the department refused to pay, according to the lawsuit.

The lawsuit called the situation an “unconstitutional unwarranted search” and said Toadflax’s rights to due process were violated as well, because the company was not given a chance to prove that the plants were licensed before they were removed.

The lawsuit also noted that no one was charged with any crime, suggesting the deputies found no evidence of illegal use of the plants.

Moreau coverage doesn't just mean writing about what the Town Board discusses. The town is full of interesting characters with unusual solutions to problems. Here's five from 2020.

After years of investing in traditional sports at Harry J. Betar Jr. Recreational Park, the Moreau Town Board is exploring other options.

Two businesses want to relocate to the Moreau Industrial Park.

A car accident Tuesday afternoon had far-reaching consequences for businesses and people working from home in Moreau.

Town officials have discovered yet another thing that went wrong when the new $1.4 million highway garage was built in 2011

The First Baptist Church of Moreau is holding services in its parking lot. "Amen" is now punctuated with honks.

Moreau residents ask for truck ban on their road

Moreau residents want trucks to stay off their road, which has become a popular cut-through for garbage trucks.

Toadflax: Getting the job done on the Hudson

Editor’s Note: This is the second part of a two-part series on the replanting of the Hudson River bottom that was part of the PCB dredging project.

Rich Morris, who owns the Toadflax plant nursery in Moreau, directly contracted with General Electric to grow and successfully transplant all of the underwater vegetation needed for GE’s dredging project.

MOREAU — After a complaint last week, Toadflax is demolishing portions of a 200-year-old building even though the company hasn’t finished buyi…

MOREAU — An abandoned house next to Toadflax Nursery is going to be partially demolished so the business can expand.

Why gas prices are finally letting up and for how long