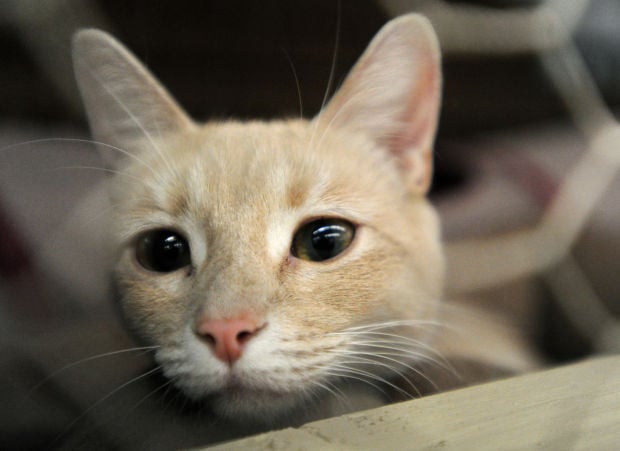 A kitten named Annie (for Fort Ann)looks curiously at a visitor from her enclosure in the workshop of Great Meadow Correctional Facility Friday, January 10, 2014. (Jason McKibben - jmckibben@poststar.com) 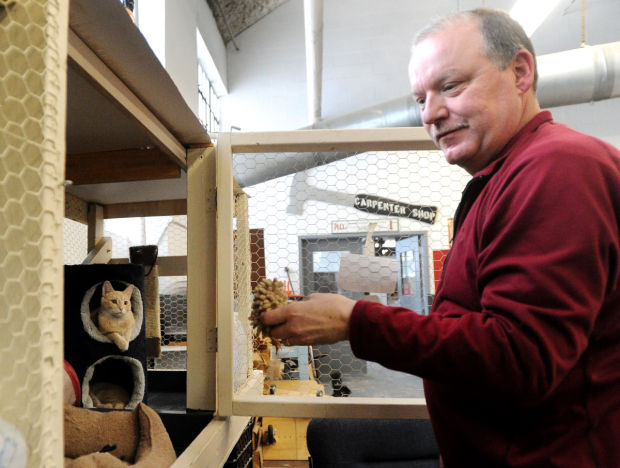 Bruce Porter, head electrician at Great Meadow Correctional Facility visits Friday, January 10, 2014, with a litter of kittens found a few months ago within the prison walls. Porter comes in about an hour early each day to care for the cats and hopes to find them good homes by the spring. (Jason McKibben - jmckibben@poststar.com)

FORT ANN -- Great Meadow Correctional Facility has become home to four unlikely inmates. Some might call them cute and cuddly.

A litter of tan kittens found its way into the bowels of the prison a few months ago and since then, into the hearts of some of the staff and inmates.

Employees have chipped in for food and the Granville Veterinary Clinic has offered medical services at low cost. The state has helped provide food and flea and tick medicine when the kitten funds fall short, according to Jeffrey Lindstrand, deputy superintendent of administration.

The kittens were in tough shape when they were discovered. They had to be bathed in Ivory soap to get rid of “hundreds” of fleas, and dewormed. They were fed milk through baby bottles.

Their primary caretaker, head electrician Bruce Porter, comes in about an hour before his shift begins each day to tend to them.

“I’ve got a soft heart for any sort of animal. I don’t mind helping them out a bit,” he said.

The kittens are named for the prison and the surrounding area. There is Doc (for the Dept. of Correctional Services), Comstock (for the location of the prison), Annie (for Fort Ann) and Meadow (for Great Meadow).

They live in the building maintenance area on the bottom floor in a “kitty condo” an inmate fashioned from scrap wood and chicken wire. The 12-foot by 3-foot cage has adjoining living and bathroom quarters, comfy spots to curl up in and toys to while away the hours.

At night, the “condo” door is left open for the kittens to roam freely around the huge room.

Porter has gotten to know their personalities and talks about them like they’re children. He seems partial to Meadow, who took an instant liking to him when she wrapped herself around his legs.

On weekends when many employees are off, an inmate nicknamed the “cat whisperer” helps care for them. He speaks Spanish and gets them to follow directions, according to Porter.

“He loves them to death,” he said.

This is not the first time stray cats have made Great Meadow their home. Lindstrand said over the years many had wandered in from a nearby farm outside the prison walls.

Fewer felines meander about since the farm closed but Great Meadow now follows the guidelines of the Trap, Neuter and Release program, promoted by the American Society for the Prevention of Cruelty to Animals, to help stabilize the cat population.

TNR has been used successfully at Sing Sing Correctional Facility, among others, to help with the feral cat problem.

“You try and catch the cats, then you take them to a vet and have them treated and make sure everything’s OK with them and return them back to their area, with the exception of the kittens, where if you can get a suitable adoption we then adopt them out,” Lindstrand said. “There’s no extermination of them, no getting rid of them. If one were so sick that the vet said they had to be put down, that would be done, but we haven’t run into that at all.”

About 10 cats have been adopted in the past couple of years by employees and members of their extended families. Max, the first adoptee, went to the father of a corrections officer. He was pictured on the front of the family’s Christmas card in December, holed up in a dryer.

The current group of kittens won’t be released outdoors until spring, but Lindstrand is hoping they’ll all find good homes among the staff before then. Porter is doing what he can to talk up adoption among his co-workers, especially women.

Lindstrand said if someone not associated with the prison wishes to adopt, the person could call his office in the spring to inquire if there are any kittens left.

Be advised, though, Meadow will probably not be available. Porter would like very much to take her home with him.

“I’ll break down and do it,” he said with a chuckle.

In the meantime, Lindstrand said the kittens are providing some necessary TLC to those staff members who come down for a visit, including a few who are going through their own “highs and lows.”

“Some of the people tend to go over and pet the cats a little longer to help them get through it,” he said. “A kitten’s tough to ignore.”

Wow! These ancient creatures were the first to sneeze hundreds of millions of years ago

Wow! These ancient creatures were the first to sneeze hundreds of millions of years ago

A kitten named Annie (for Fort Ann)looks curiously at a visitor from her enclosure in the workshop of Great Meadow Correctional Facility Friday, January 10, 2014. (Jason McKibben - jmckibben@poststar.com)

Bruce Porter, head electrician at Great Meadow Correctional Facility visits Friday, January 10, 2014, with a litter of kittens found a few months ago within the prison walls. Porter comes in about an hour early each day to care for the cats and hopes to find them good homes by the spring. (Jason McKibben - jmckibben@poststar.com)