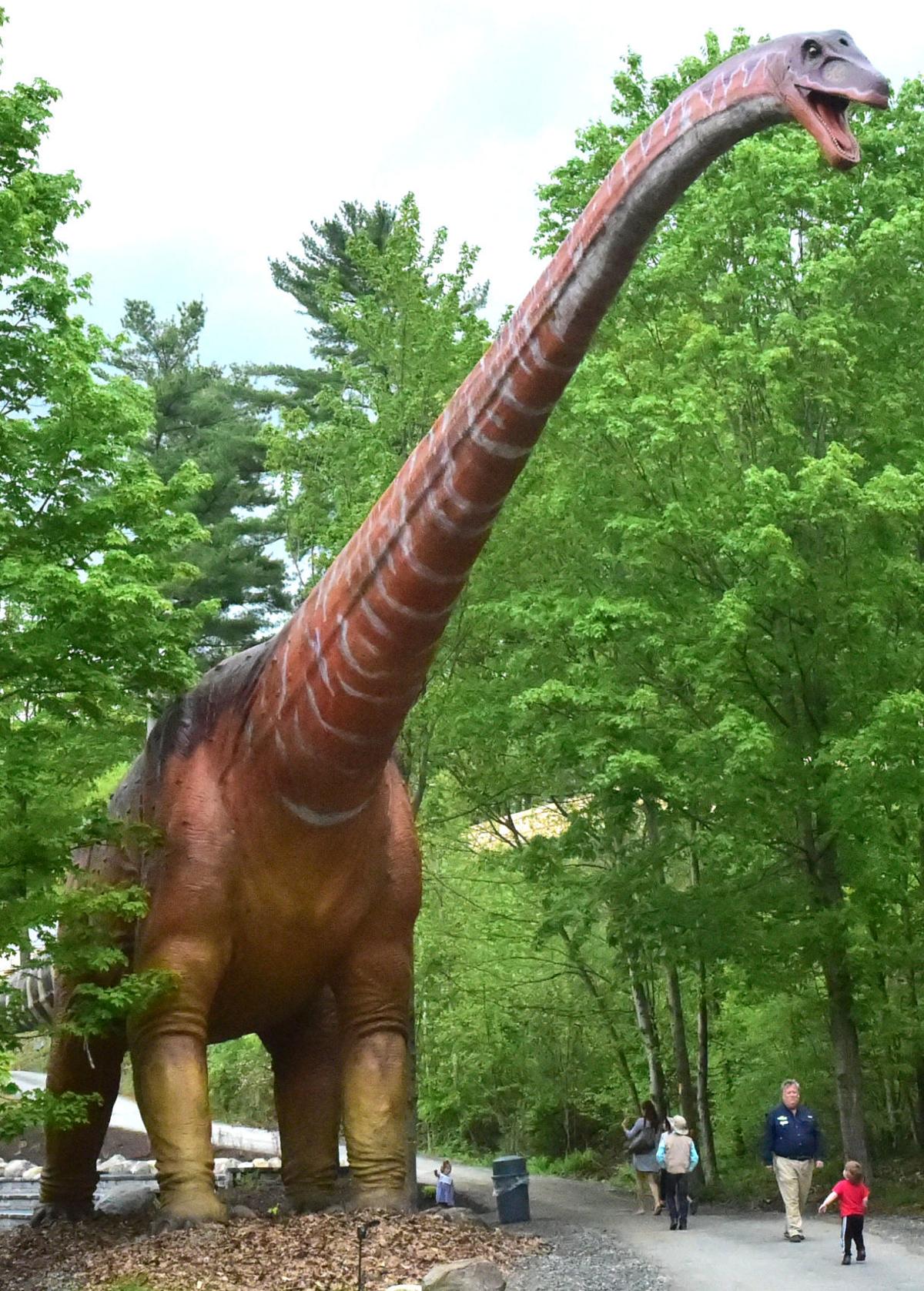 Titanosaurus, one of the largest dinosaurs every discovered, towers above Gavin Wase, 2, in red. The animatronic dinosaur is one of 20 at Dino Roar Valley in Lake George, a new tourist attraction opening to the public at 10 a.m. Saturday. 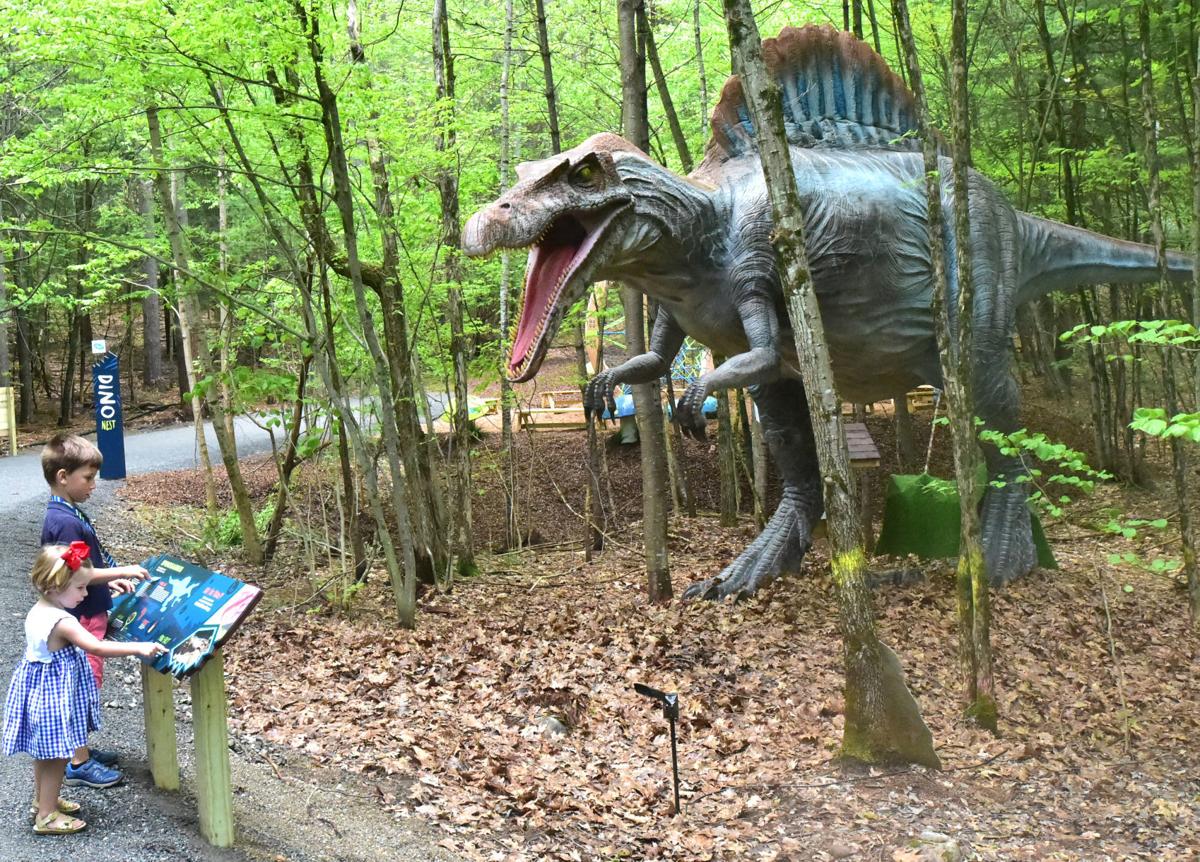 Jack O'Keefe, 7, and Welles O'Keefe, 2, study an information board about a dinosaur at Dino Roar Valley in Lake George on June 24. 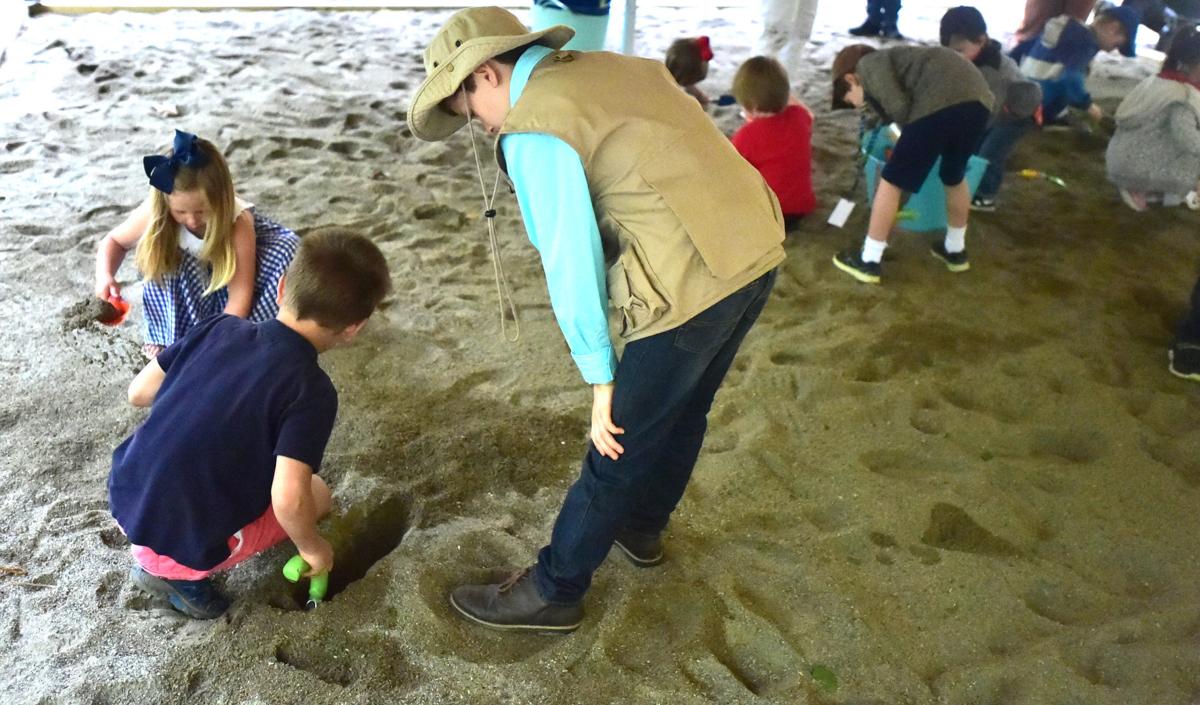 Children can uncover a total of six full-size fossils in the sandboxes at Dino Roar Valley in Lake George on June 24. The dinosaur fossils hidden in the sand include a raptor.

LAKE GEORGE — The sounds of 65 million years ago are echoing through Dino Roar Valley.

Paleontologists don’t actually know what dinosaurs sounded like or even what color they were, but that has not stopped the designers of Lake George Expedition Park, which includes the new dinosaur attraction and the well-known Magic Forest park, from providing their best guess.

The park opened for members of the news media — and a few lucky children — on Friday. It opens to the public Saturday at 10 a.m.

Children were stunned into breathless silence from their first step.

“It was moving!” gasped Jack O’Keefe, 7, of Saratoga Springs, after the first dinosaur turned its head to watch him.

While some children were frightened enough to cling to a parent’s leg, most found it delightfully scary.

“Ahhh! Oh, no!” yelled Gavin Wase, 2, of Coxsackie, when a triceratops opened its mouth.

But then the herbivore gave a friendly cry and Gavin laughed.

“Yay!” he said when the dinosaur moved.

Other dinosaurs — the carnivores — seemed to almost growl.

Each dinosaur was tucked into the woods along a half-mile walking path. While visitors could hear more than one dinosaur at a time, each full-size spectacle was presented singly, allowing plenty of time for appreciation.

The argentinosaros, which is 140 feet long and 32 feet tall, captured many children’s interest.

The parents on the tour loved it too.

“Really, the expressions on the kids’ faces was the best part,” said Maureen Wase. “They were in awe.”

Her son Braiden Wase, 8, said it made him wish he could go back in time — but only if he was guaranteed the dinosaurs wouldn’t eat him.

Given the dangers, he said he preferred the modern animatronics.

“It’s really cool,” he said. “Because they move and they roar and they do everything they did back then.”

Other parents said the new attraction felt like walking onto the set of “Jurassic Park,” the movie about a park built by scientists who made live dinosaurs.

Of course, in that case the dinosaurs escaped. These dinosaurs won’t walk anywhere.

But they still seem real.

“It’s cool to see dinosaurs in the woods,” said Dan Patsey of Clifton Park. “The sounds are really cool. It makes you feel you’re really there.”

His daughter Hailey, 4, thought so too. She clung to her father throughout the trip.

“They’re too scary. They like to roar. They’re too big,” she said of the dinosaurs.

They are all life-size, based on bones found around the world.

Budding paleontologists can end the trip at a huge sandbox, where three life-size dinosaur skeletons have been buried. Brushes and shovels are provided to encourage children to try to uncover the fossils.

And then, as visitors leave, they are greeted by titanosaurus, one of the largest dinosaurs ever discovered. It is 165 feet long and 38 feet tall.

General Manager John Collins was thrilled to watch children delight in the dinosaurs. It was an ordeal to get the park built.

“With the weather we had — the late winter — we had snow in April! And then it rained pretty much every day,” he said. “Rain, sleet snow, we worked through it all.”

Dino Roar Valley is next to an existing amusement park, Magic Forest. Visitors can buy a combo ticket to visit both parks, or pick just one.

Photo op with a dinosaur

LAKE GEORGE — Dino Roar Valley has gotten the go-ahead from the town of Lake George.

LAKE GEORGE — Magic Forest amusement park will become Lake George Expedition Park when taken over by a new owner in the coming months, with ad…

LAKE GEORGE — Magic Forest, the iconic amusement park on Route 9, is apparently getting a new owner who plans significant changes at the park.

In the name of science

Genetic researchers announced last week they are one step closer to turning a chicken into a dinosaur.

Blog: No DinoRoar for my daughter (yet)

Going to Mystic Aquarium may have saved me $75, and I’m terribly disappointed about it.

Imaginative new summer attractions leaping in where others have failed

Lots of tourists come to the Glens Falls/Lake George area every summer, but it's a challenge to make a big, expensive tourist attraction profitable when you can stay open only for a few months each year.

Titanosaurus, one of the largest dinosaurs every discovered, towers above Gavin Wase, 2, in red. The animatronic dinosaur is one of 20 at Dino Roar Valley in Lake George, a new tourist attraction opening to the public at 10 a.m. Saturday.

Jack O'Keefe, 7, and Welles O'Keefe, 2, study an information board about a dinosaur at Dino Roar Valley in Lake George on June 24.

Children can uncover a total of six full-size fossils in the sandboxes at Dino Roar Valley in Lake George on June 24. The dinosaur fossils hidden in the sand include a raptor.