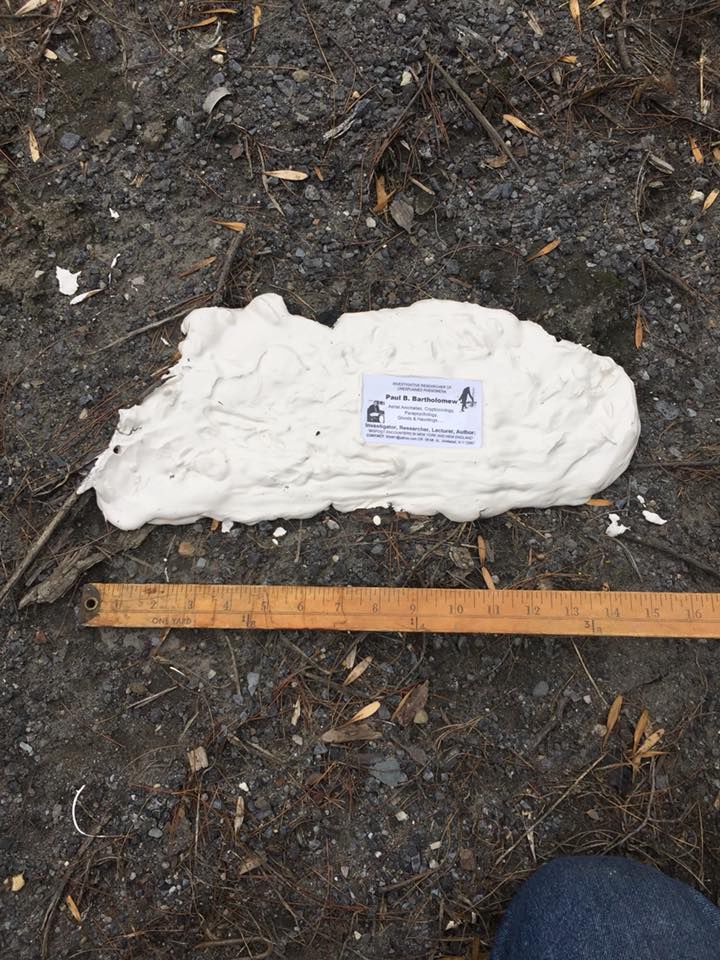 Paul Bartholomew, an investigator for 40-45 years on Bigfoot, casts a footprint at the location of a sighting off of Route 4 in Whitehall on Wednesday. 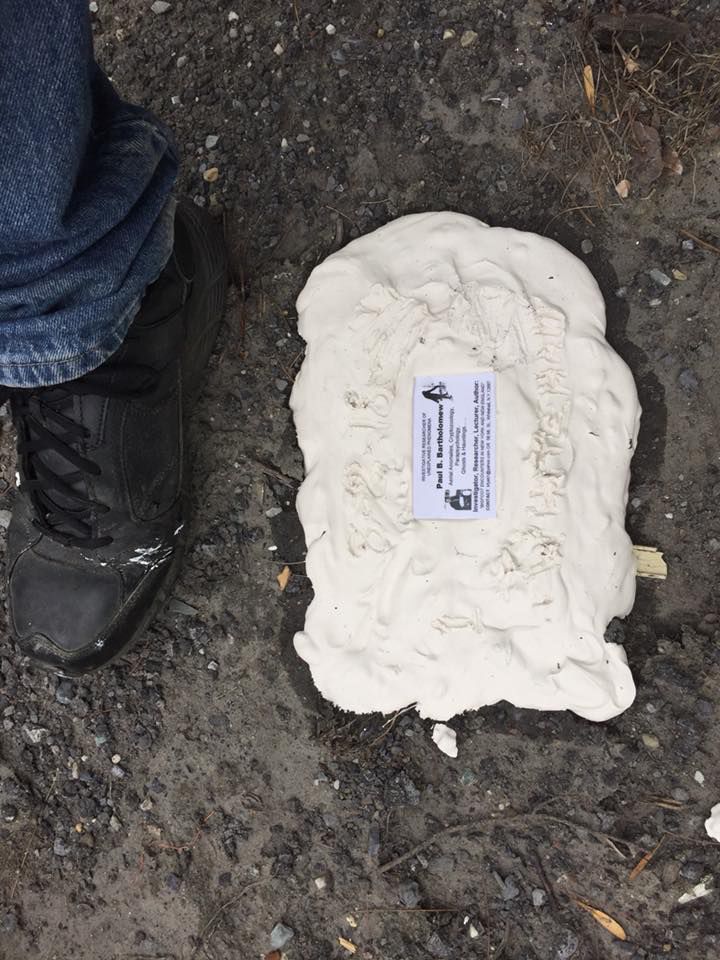 Paul Bartholomew, who has been looking into Bigfoot sightings for decades, made a casting recently of a footprint found near Route 4.

WHITEHALL — A driver witnessed a 6- to 6 ½-foot black creature off of Route 4 Tuesday night at around 10:10 p.m., investigator Paul Bartholomew said, which coincides with historic trends in the area.

Often phrased as Bigfoot, the mythical creature has been spotted here and there, although the recent spotting was only ½ mile away from the September 2006 sighting. Most sightings, Bartholomew said, are in the late summer and early fall.

He said the witness, who preferred not to be named because of possible ridicule, contacted him within 18 hours and they returned to the location to do castings on the marks. The witness described the animal as a large, black outline with two legs, wide shoulders and a little to no neck. It was stepping over a guardrail.

Bigfoot, or also named sasquatch, has been iconic in Whitehall. In July, the village of Whitehall announced Bigfoot as its official animal, the Times Union reported.

Bartholomew wants the stigma around reporting a Bigfoot sighting to change. To benefit the documentation of the hidden creature, he said, spotters should feel comfortable, not fear criticism, to report it. He noted a former Whitehall police officer who requested not to have his name released for 22 years in fear of being known as the Bigfoot cop.

“We are trying to see if anybody else had similar sightings,” he said. “… We try to document what’s going on here as thoroughly as possible. So now that the word is out there, when people have a sighting or strange smells that comes with it, they will know who to contact.”

The casts for Tuesday’s sighting had its feet measured at 10-12 inches long and possibly around 5 inches across.

“This is a rich history, a rich legend here,” Bartholomew said. “It is interesting how the (area) adopted the topic. Maybe in years past, I wouldn’t have gotten this sighting so quickly.”

There is also a Sasquatch Calling Festival in Whitehall on Sept. 29.

Andrew David Kuczkowski is the education reporter. Andrew can be reached at 518-742-3354. Follow Andrew on Twitter: @ByKuczkowski.

Blog: Bigfoot sighting is the story everyone is talking about

There are certain stories I’m always been a sucker for.

Paul Bartholomew, an investigator for 40-45 years on Bigfoot, casts a footprint at the location of a sighting off of Route 4 in Whitehall on Wednesday.

Paul Bartholomew, who has been looking into Bigfoot sightings for decades, made a casting recently of a footprint found near Route 4.