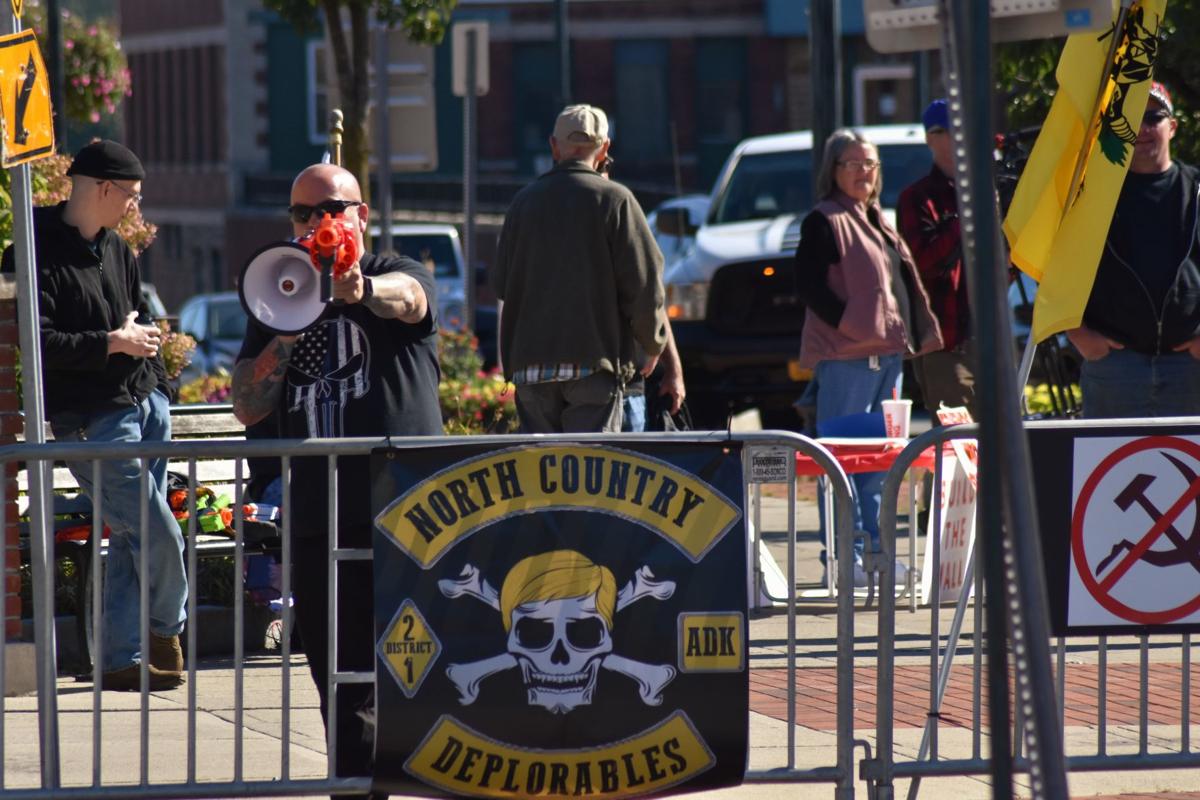 The leader of the North Country Deplorables points his fake semi-automatic weapon at a Post-Star reporter during a rally at Centennial Circle in Glens Falls on Saturday afternoon. 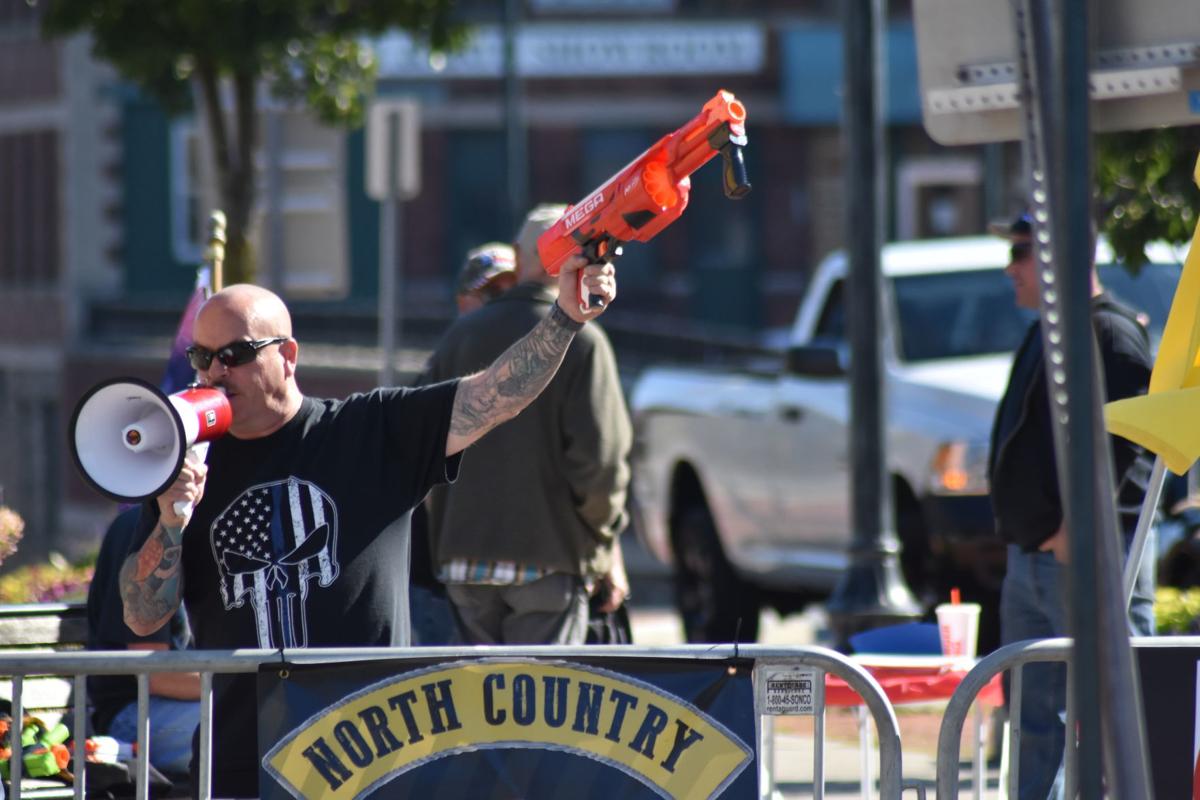 The leader of the North Country Deplorables points his fake semi-automatic weapon at a Post-Star reporter during a rally at Centennial Circle in Glens Falls on Saturday afternoon and threatens the newspaper. 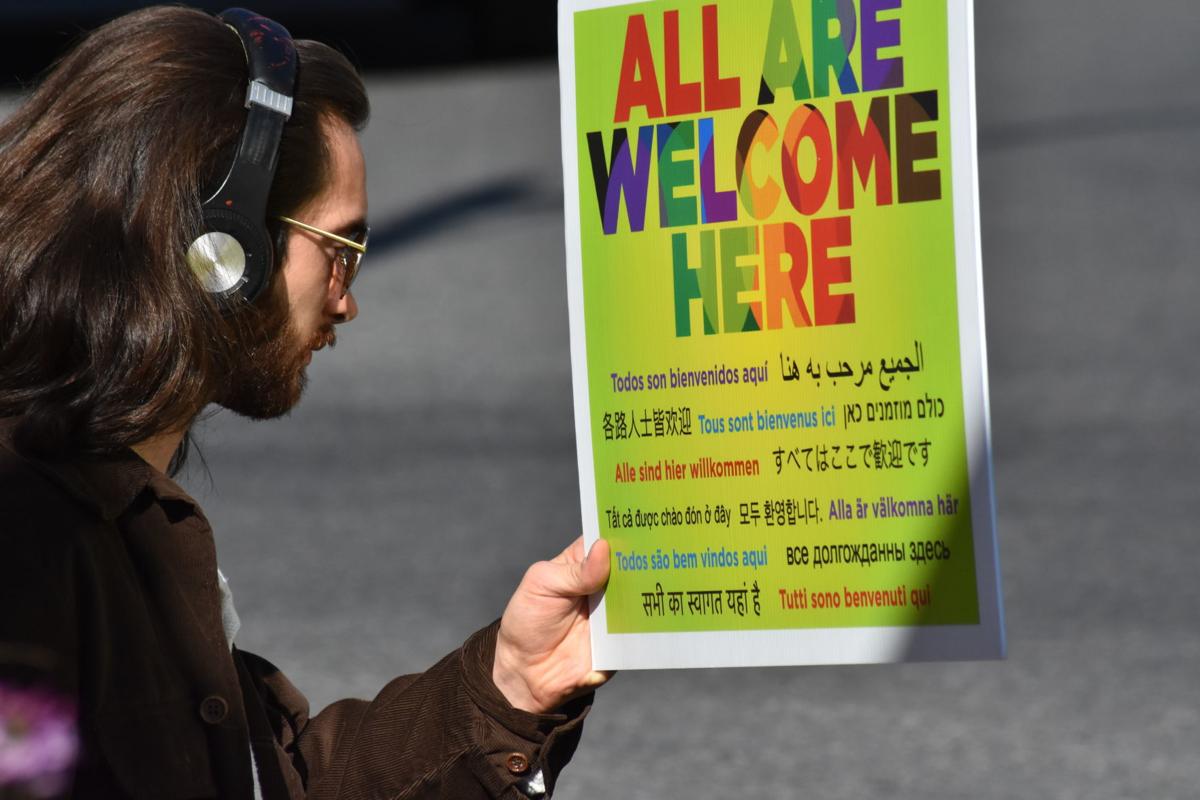 A unidentified young man sat down on the sidewalk on Centennial Circle, wearing sound-blocking headphones and holding an "All are welcome" sign, during a pro-Trump rally on Saturday afternoon.

GLENS FALLS — Bill Bombard had been planning a pro-Trump rally for Saturday at Centennial Circle since last month as an opportunity to get people registered to vote, support the president and share their views.

And although the Glens Falls Police got a report last week that the group planned to bring unloaded rifles to Saturday’s rally as part of their support of the Second Amendment, Bombard said his group never had that intention and they did not bring any firearms.

“I don’t know anything about the gun thing,” Bombard said on Saturday afternoon during the rally. “I had nothing to do with that.”

To get ready for Saturday, Bombard sent out flyers, organized a voter registration table and had detailed hand-outs and talking points, ready for the event.

But at the last minute, Mike Kibling, the leader of the North Country Deplorables, hijacked Bombard’s Glens Falls rally in Centennial Circle with a miniature army of less than 10. Screaming personal insults through a megaphone at bystanders, Kibling lashed out at passengers in cars and threatened The Post-Star.

“Look at that guy over there, that guy is a racist,” Kibling shouted through the megaphone, pointing to a passenger riding by in a vehicle. “You call me a Nazi, I got a few names right back for you. You don’t get to call me a Nazi because I support our president.”

Bombard explained that the Friends Who Support President Trump have been around since 2017 and they were standing outside at Centennial Circle in support of the president long before Kibling and others recently appeared.

“Let’s fast forward here, within the last three or four months, APEX formed and then the Deplorables broke off them because they had a falling out,” Bombard said. “So there are actually three groups.”

Bombard does not want to stop the other groups, citing their First Amendment rights, but he wants them to organize their own rallies.

“My members are leaving,” he said. “We can’t make them leave, they have the right as well. What’s making me mad is every time we try and do a rally, we do all the work and they show up like they want to be top-dog. It’s turning a lot of my members off. And they’ve been with me for two years faithfully.”

During the rally, several members of Bombard’s group stepped away from Kibling, many sitting on benches and some leaving the rally altogether.

“They can do their own thing, but let them do their own rally, everybody’s painting us with the same brush. I’m not the Deplorables. I’m not APEX,” he said. “We’re trying to keep everything separate. They can do what they want to do on their time, not our time. We don’t appreciate it ... I won’t be marginalized. We were here when nobody else wanted to stand, how dare they.”

When Kibling noticed a Post-Star reporter on scene, he cocked his unloaded fake semi-automatic weapon repeatedly, saying, “Here is my unloaded rifle, Post-Star. Thanks for the calls from the FBI and the BCI.”

Swinging around and aiming the fake gun’s barrel directly at the reporter’s face, Kibling called the reporter by name through the megaphone, and after shouting what was wrong with the reporter, Kibling then threatened the Glens Falls newspaper.

“Hang on, Post-Star, we’ve got one coming for you over there too,” Kibling said.

According to Bombard, APEX and the Deplorables have their own way of doing things, and that’s their right.

“That’s what’s great about America,” he said, explaining that the Constitution says ‘peaceful assembly.’ “I have no problems with how they are doing it, it’s just not what we want to do. And now everybody thinks its their rally and we’re part of them. It’s not true. It’s kind of embarrassing.

“I told APEX, ‘don’t come to the rally.’ I told Deplorables, ‘don’t come to the rally,’” he continued. “When they come, they take over and do things their way ... They keep following us around and its real irritating. You know what they’re trying to do, they’re trying to break us so we won’t show up at rallies. But this is not my first rodeo and its probably not my last. “

On Saturday afternoon, during the pro-Trump rally, downtown businesses were especially slow, with only a handful of customers eating at the many outside venues.

One business owner shared that a couple visiting the city asked if it was always like this downtown.

Several businesses are now placing “Everyone welcome” signs in windows to counter some of the hateful rhetoric from Kibling, who was shouting things like, “I heard that liberals are now eating children.”

A woman stopped to comment that she wanted to get a cup a coffee but really didn’t want to cross the street. After some hesitation, she braved the crossing. Two young mothers also trying to cross the street, rushed through the rally participants, nearly running with their children in strollers.

Carol Barrett of Glens Falls pulled up a chair in the sun next to Raul’s to watch what was happening.

“It’s so hateful ... I have to be here, I just don’t understand how this has gotten so out of control,” she said.

Barrett shared that she is now 80 and has lived through 12 presidencies.

“I’ve got to tell you, when I was born Hitler invaded Poland in 1939. So I remember a lot of things that were going on, and people didn’t believe what was going on then,” she said. “I just see so many similarities in what’s going on now. The division in our country and the hate, I’m shocked.”

My wife grew up in Fort Edward. She has many family members up here, and one of them posted this weekend that The Post-Star’s pre-rally covera…

GLENS FALLS — So, today I was at Centennial Circle for another pro-Trump rally that police had warned ahead of time, might have unloaded weapo…

BLOG: One protest group condemns actions of another

After Saturday’s protest in downtown Glens Falls, I was one of four people who received an email from David R. Van Scoy of the American Patrio…

BLOG: There is power in nonviolent protest

Since the Women's March drew 1,500 to downtown Glens Falls in 2016, the weekend of President Donald Trump's inauguration, I have been covering…

A group of activists have brought forth concerns about safety during demonstrations in Glens Falls with more planned in the future.

Organizers of demonstrations in the city would be required to get a permit at least 10 days before the event and air horns would be prohibited under a draft local law that the Common Council will review on Tuesday to regulate the proliferating protests occurring downtown.

Two pro-Trump rallies will be held Thursday in Glens Falls and Hudson Falls.

The leader of the North Country Deplorables points his fake semi-automatic weapon at a Post-Star reporter during a rally at Centennial Circle in Glens Falls on Saturday afternoon.

The leader of the North Country Deplorables points his fake semi-automatic weapon at a Post-Star reporter during a rally at Centennial Circle in Glens Falls on Saturday afternoon and threatens the newspaper.

A unidentified young man sat down on the sidewalk on Centennial Circle, wearing sound-blocking headphones and holding an "All are welcome" sign, during a pro-Trump rally on Saturday afternoon.