Speaking to a crowd of more than 100 people, packed into a small room at Crandall Public Library, she described her family’s health care nightmares and explained why she now supports a way in which anyone could buy a Medicare coverage plan.

Her daughter developed an eating disorder in high school. Cobb described ordering her daughter to eat — “or I’m going to make you go to a counselor.”

But the reality was, there was no counselor available. They were on their own.

More recently, last summer, Cobb drove to Massachusetts to help an adopted brother who was an alcoholic. He had just been discharged from the hospital and needed to get into a detox program, but it was the weekend and no one answered the phone as she called each facility.

“The only reason I could get him in was because I could call a friend who could navigate the system,” she said. “My brother is sober now.”

But she described the sinking feeling she felt that week, after she got her brother into detox.

“Exactly that week, Elise Stefanik voted against health navigators for addiction services,” she said. “We need to be able to help families who are suffering.”

The bill, H.R. 987, dubbed the MORE Health Education Act, would have trained health care navigators to better inform consumers about addiction recovery services, among other items. It passed in the House, went to the Senate, and was referred to committee. No action has been taken since then.

“I get it,” she said. “I understand the issues we have and I’m fighting for those on a personal level.”

She also explained thoroughly her reasons for supporting a Medicare public option, in which people can buy Medicare coverage at any age — rather than “Medicare for All,” in which all citizens would have government-funded health care.

In her 2018 run for Congress, she said she was leaning toward Medicare for All, and at one point her website touted her support for it. But years of discussion with doctors and constituents has led her to decide that the public option is the better approach, she said.

“Recently, I met with many doctors. There wasn’t a consensus in the medical community,” Cobb said. “Doctors like Medicare. The concern is whether they’ll be reimbursed.”

And while many constituents and some unions have also told her they like Medicare for All, other unions told her they don’t want it.

“Some of the unions do not because they have negotiated for their health care,” Cobb said. “People come to this issue from many places.”

While she has staggering health care costs, she said, “some people have negotiated and like what they have.”

She likes having an option to buy Medicare, she said later.

“It’s not an insurance company that is for-profit,” she said. “The idea is I can buy in or take my employer health care — whichever is cheaper. And then I can take that (Medicare program) wherever I go, to any job.”

With a public option, anyone could buy Medicaid coverage, for any reason. They would be eligible at any age and could take the public option even if their employer offered health insurance. There are concerns that it would be as cost-prohibitive as the health insurance marketplace, which is unaffordable for many middle-class buyers who are not eligible for a federal subsidy.

But Cobb noted that administrative costs are much lower for Medicare, and she predicted that the cost would go down as more people joined the program.

About half of the people who gathered to listen to Cobb on Tuesday said they would prefer a government-funded health care system for all, such as Medicare for All. The system in general is often called a universal or single-payer system.

But most of them said they’d vote for Cobb even though she supports a Medicare public option.

“I would like us to get to universal health care sooner rather than later,” said Kathryn Hull of Lake George. “So we have a little, perhaps, disagreement there.”

But she said she was still impressed by Cobb.

“Her manner and integrity — I’d vote for that,” she said.

Another supporter said Cobb was right to find a compromise in terms of health care.

“I would like universal health care, but I have talked to people who have different opinions,” said Bernice Mennis of Fort Ann. “She’s a listener. I would love to have her.”

But one constituent told Cobb that the public option position would lose her a vote.

“If you don’t support Medicare for All, that’s a deal-breaker for me,” said Tracy Frisch of Argyle. “The public option will not have the effect of reducing costs of the system as a whole. … The medical offices will still be dealing with 27 health insurance companies.”

“I understand we have a fundamental difference there,” Cobb said.

During the event, Cobb focused on her views, but occasionally mentioned how she differs from her opponent, U.S. Rep. Elise Stefanik, R-Schuylerville.

“My family’s small business health care coverage got canceled because of the ACA,” Stefanik said. “And the replacement options were more costly. I think Obamacare took us in the wrong direction.”

She added that she has focused on veterans, which has persuaded her that a government-funded health care system for all would be a disaster. She said a single-payer, government-run system has already been tried — by the U.S. Department of Veterans Affairs.

“I see how a single-payer system like the VA is broken,” she said. “We have had to step in for hundreds of veterans, cutting through the bureaucracy and red tape. The VA hasn’t been responsive and doesn’t understand their needs.”

In many cases, her office has even had to set up appointments for veterans at their local VA office because it was so difficult for the veterans to get an appointment, she added.

“That is why a government takeover of health care is the wrong direction,” she said. “I want to focus on quality access and lowering the cost of health care.”

Stefanik also sent out a news release Tuesday, saying that Cobb had “flip-flopped” on her health care proposal. She noted that Cobb’s website in 2018 said she would support Medicare for All, and added that Cobb should be “held accountable” for supporting the Medicare public option now.

Democratic NY-21 candidate Tedra Cobb stressed her roots and her commitment to the community at an event on Wednesday.

Stillwater man pushes for 'Medicare for All' after son's suicide

For lack of $20, a local man lost his health insurance and died in April. Now his father is on a campaign to change the country’s health care system so that people like his son never again die because they’re too poor to get help.

Strong opinions on display during town hall with Rep. Stefanik

Tedra Cobb is still focused on health care reform in her campaign for New York’s 21st Congressional District, but she is vague on the details of what she thinks that reform should look like. 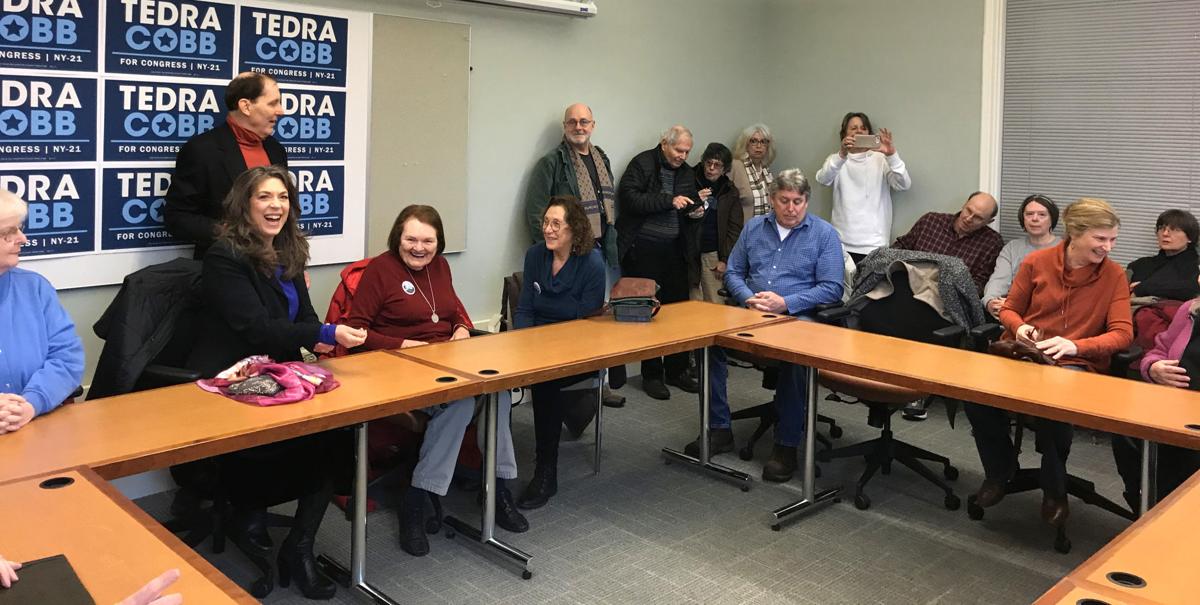 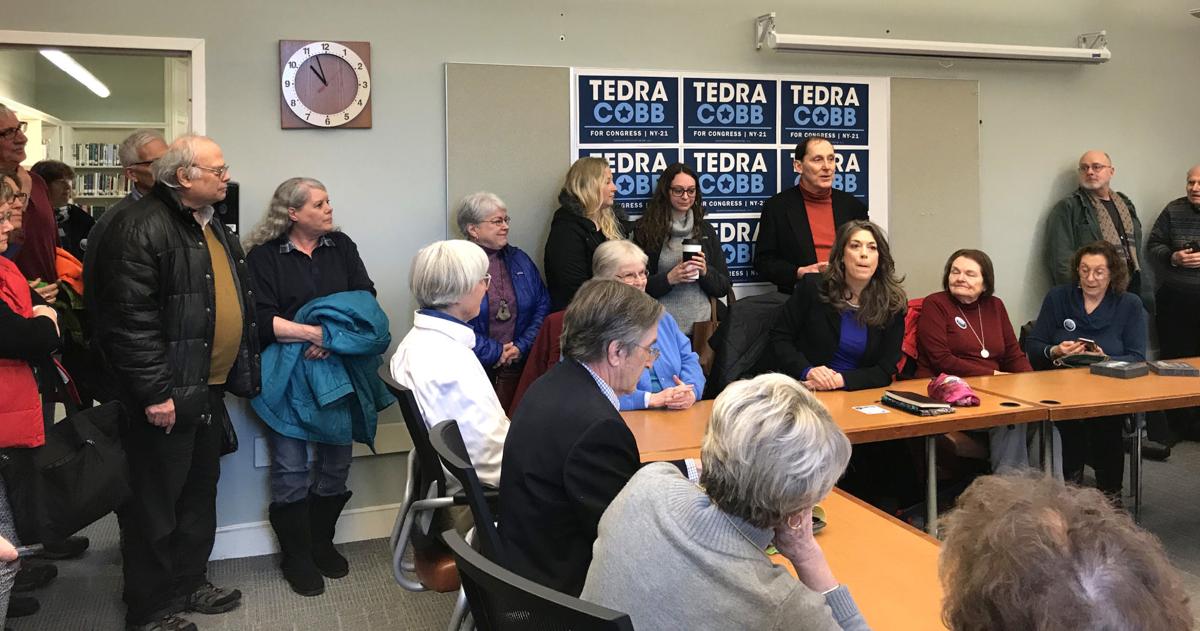 A Tedra Cobb event about health care at Crandall Public Library drew more than 100 people, who squeezed into a room that had an official capacity of 16 people.