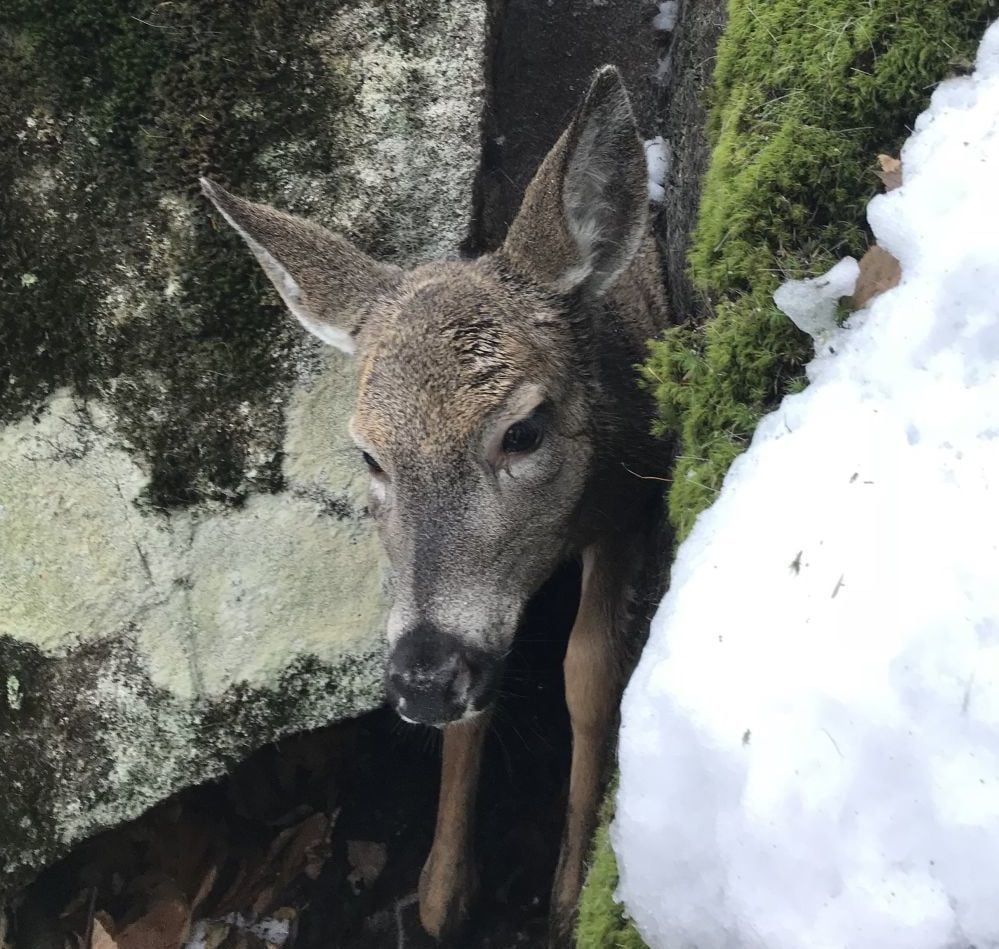 Local hunters worked all day and into the night to free this young deer they found one day during hunting season, stuck in a rock crevasse. 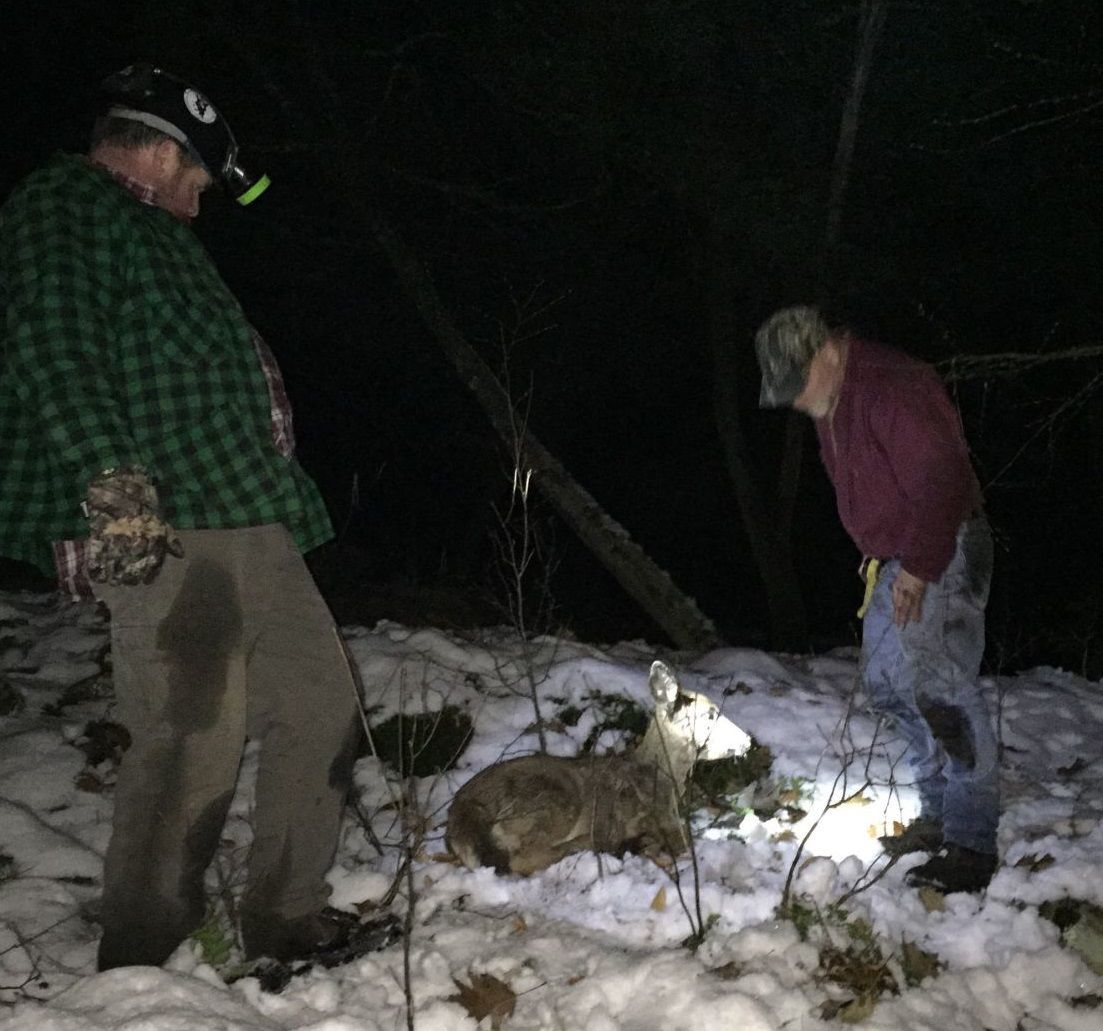 Corinth resident Jessie Walker, left, and Queensbury resident Kevin Edwards stand over the young deer. Far into the night, after more than 12 hours, the hunters had managed to free the deer. Exhausted from the ordeal, the deer lay down on some boughs the hunters had gathered. But a few days later, when one of the men went to check, the deer was gone. 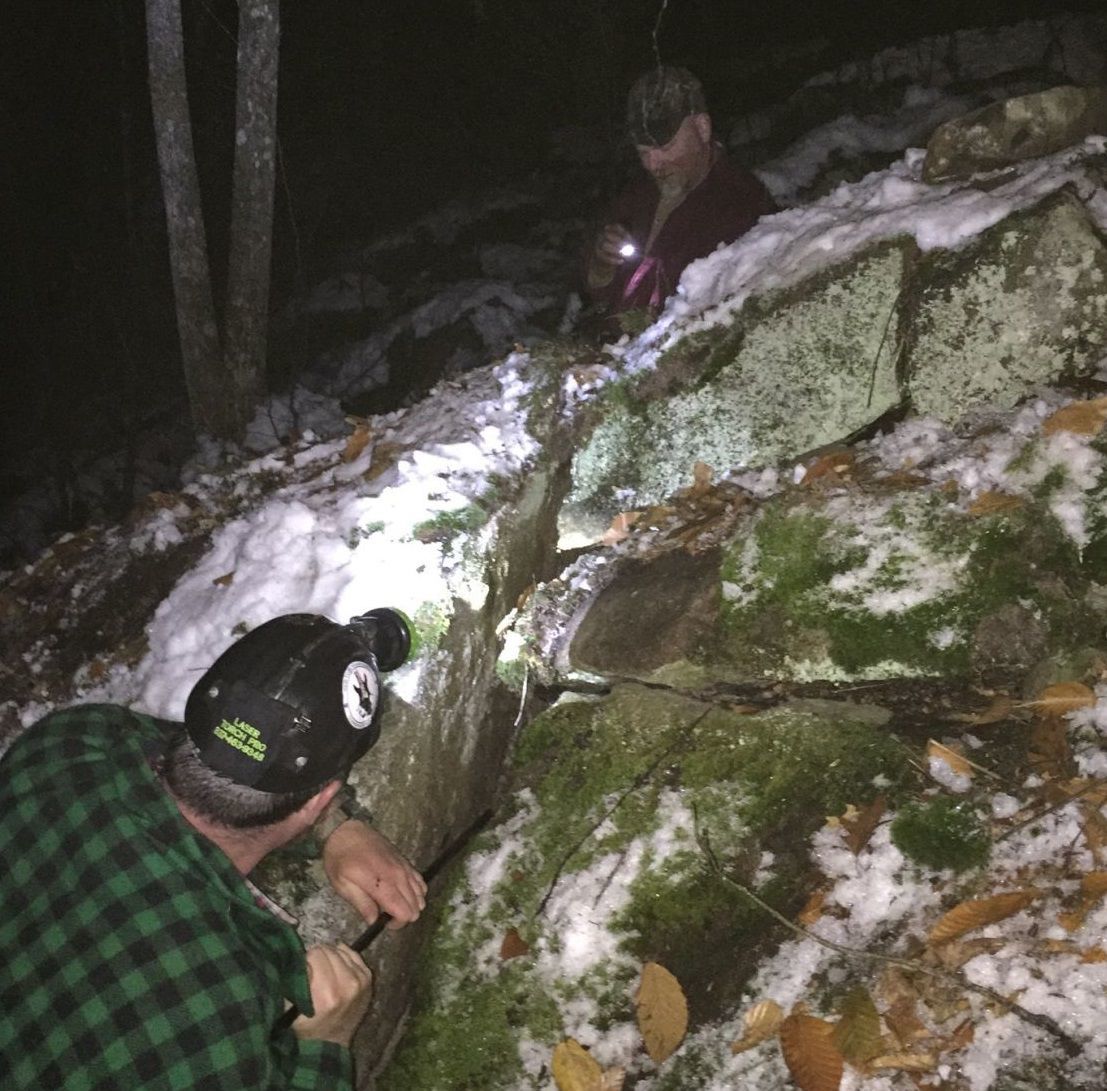 Hunters spend hours in the woods during deer season, chasing that elusive trophy buck for the meat and the bragging rights.

But in an ironic twist, a few local hunters in November spent most of one their hunting days not trying to kill a deer but to save one.

One of the men, Kevin Edwards of Queensbury, said he was hunting north of Warrensburg with his nephew, Tyler Baldwin, and Baldwin’s friend, Brendan Doster, when they heard a loud “blatting” sound.

They followed the sound and were startled to find a yearling male deer wedged 5 feet below them in a rock crevasse, unable to get out.

That was at about 10:30 a.m., Edwards said in an interview on Wednesday.

They tried until dark to extricate the deer, making multiple trips back to Queensbury for jacks and other tools. Each trek in and out was a mile.

They used and broke the jacks and cut down a tree to use as a big pry bar to try to separate the crack enough for the deer to get out.

But as night fell, the deer was still trapped, and its mother was helplessly blatting back at him from the nearby woods.

“It was like ‘this sucks,’ but I knew we tried everything we could,” Baldwin said.

But back home in Queensbury, Edwards said he couldn’t shake the scene from his mind.

“He was pacing back and forth for an hour before he said, ‘I gotta go back up there,’” Edwards’ wife Tracy said.

He felt he had to either save the deer or put it out of its misery, she said. “I said, ‘Well, you’re not going alone.’ I love to hike anyways, not necessarily at midnight, but.”

Edwards called another buddy, Jessie Walker, and his girlfriend, Evonne, and the four of them headed back to the deer, another mile hike into the woods.

“I’ve known him since we were teenagers and I’ve never seen him that physically exhausted in my life,” Tracy said of her husband. “He had a backpack of jacks on and he fell three or four times going up. That’s before we even got back to the deer. It was a grueling process, it really was.”

They worked for hours — again.

Anderson and Tracy Edwards made a bed of hemlock branches on top of the snow, hoping for success. They illuminated the area with flashlights.

A little after midnight, Edwards said, they were talking about getting the pistol to humanely end the deer’s life. They were gassed and ready to quit.

In a last-ditch effort, they decided to lasso the deer’s hind legs and try to pull it out upside down.

“I pulled and there he was, lying in my lap,” said Walker on Thursday.

“It popped right out!” Tracy said in agreement.

They carried the deer to the bed and Kevin Edwards, his wife and Anderson were petting it and comforting it.

“I actually wanted to cry, to be honest,” said Edwards, a rugged-looking man who is an avid hunter and fisherman and often wears a coyote-skin hat. “I was completely exhausted, but we were happy. We did something, I can’t even really explain it, but I think we were meant to do it honestly.”

Baldwin was in bed at about 1 a.m. when the text from his uncle came over his phone with a photo of the deer out of the rocks.

Tracy Edwards said she wasn’t surprised her husband made it his mission that day to save the deer. As well as being an avid hunter, he’s “very compassionate about the animals,” she said.

“People should know not all sportsmen are just about killing everything and taking game,” Walker said. “It’s about giving back too.”

When they left that night, the deer was still lying on the bed of boughs. But when Edwards went back to the spot days later, the deer was gone and there was no sign that a predator had gotten it.

“I’d be willing to say he made it,” he said in a hopeful tone.

Local hunters worked all day and into the night to free this young deer they found one day during hunting season, stuck in a rock crevasse.

Corinth resident Jessie Walker, left, and Queensbury resident Kevin Edwards stand over the young deer. Far into the night, after more than 12 hours, the hunters had managed to free the deer. Exhausted from the ordeal, the deer lay down on some boughs the hunters had gathered. But a few days later, when one of the men went to check, the deer was gone.