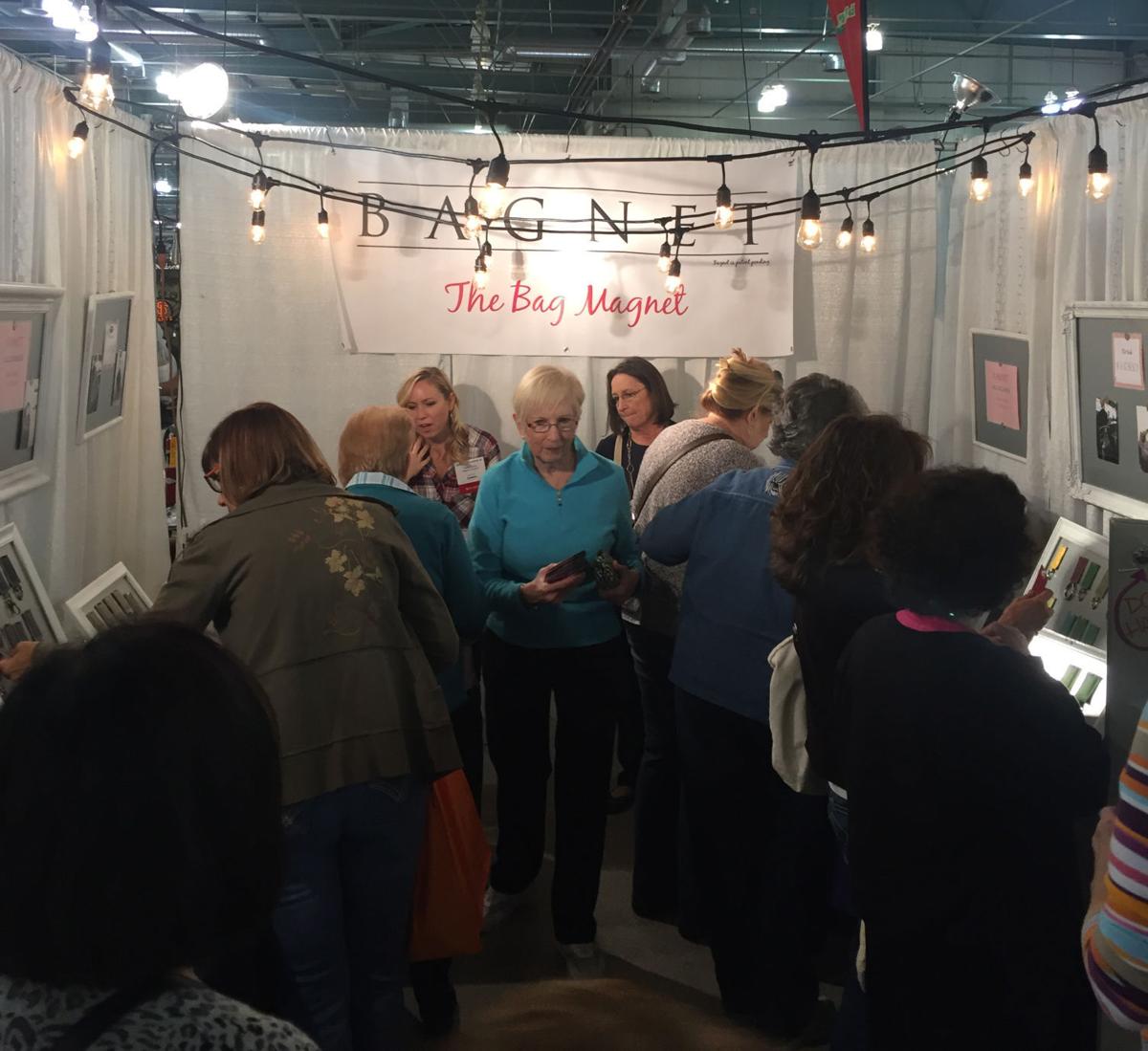 Kelley Daring, left, at back, created Bagnet, a magnetic device that attaches to the strap or hardware of a purse, then brought her product to craft and street fairs to gauge women’s reactions. 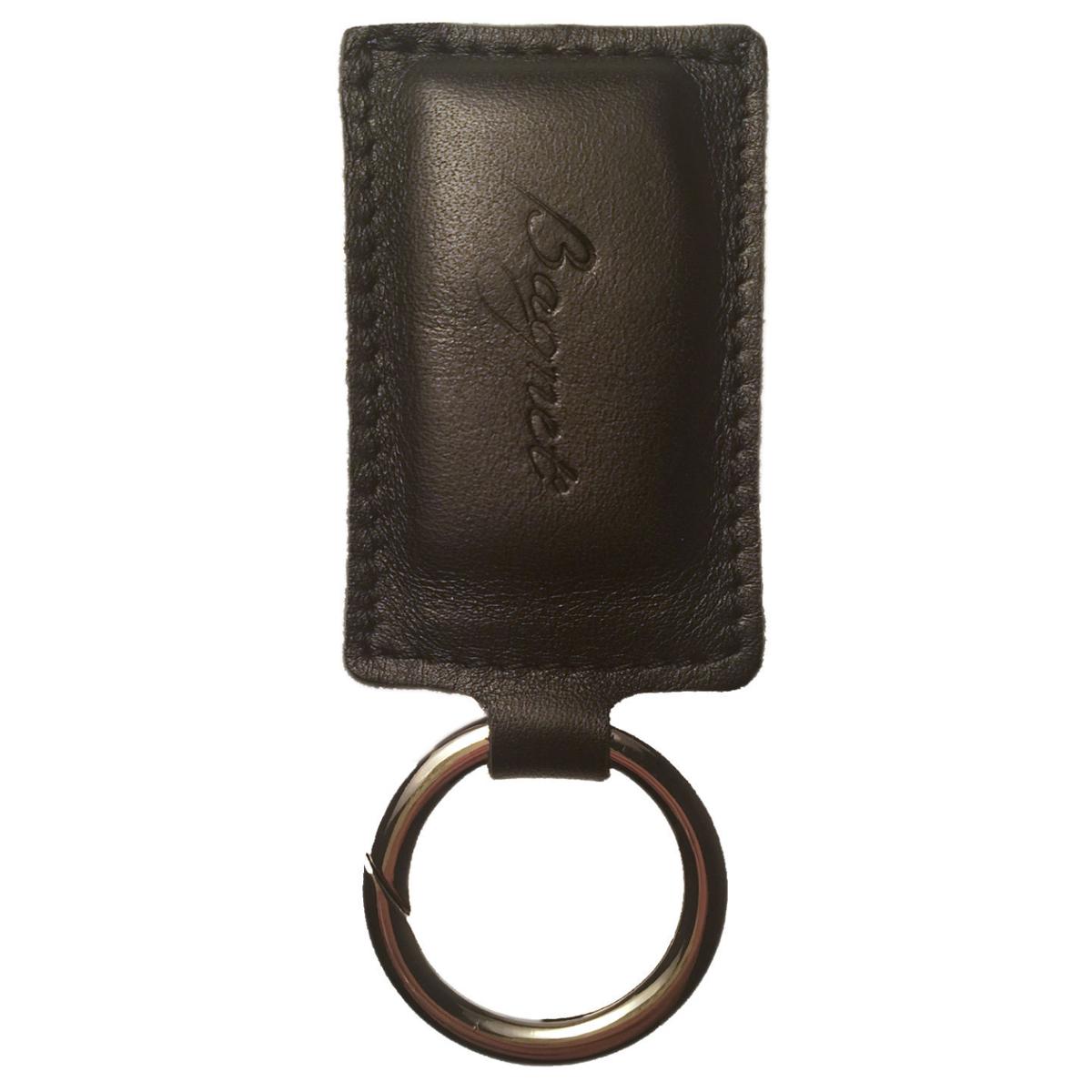 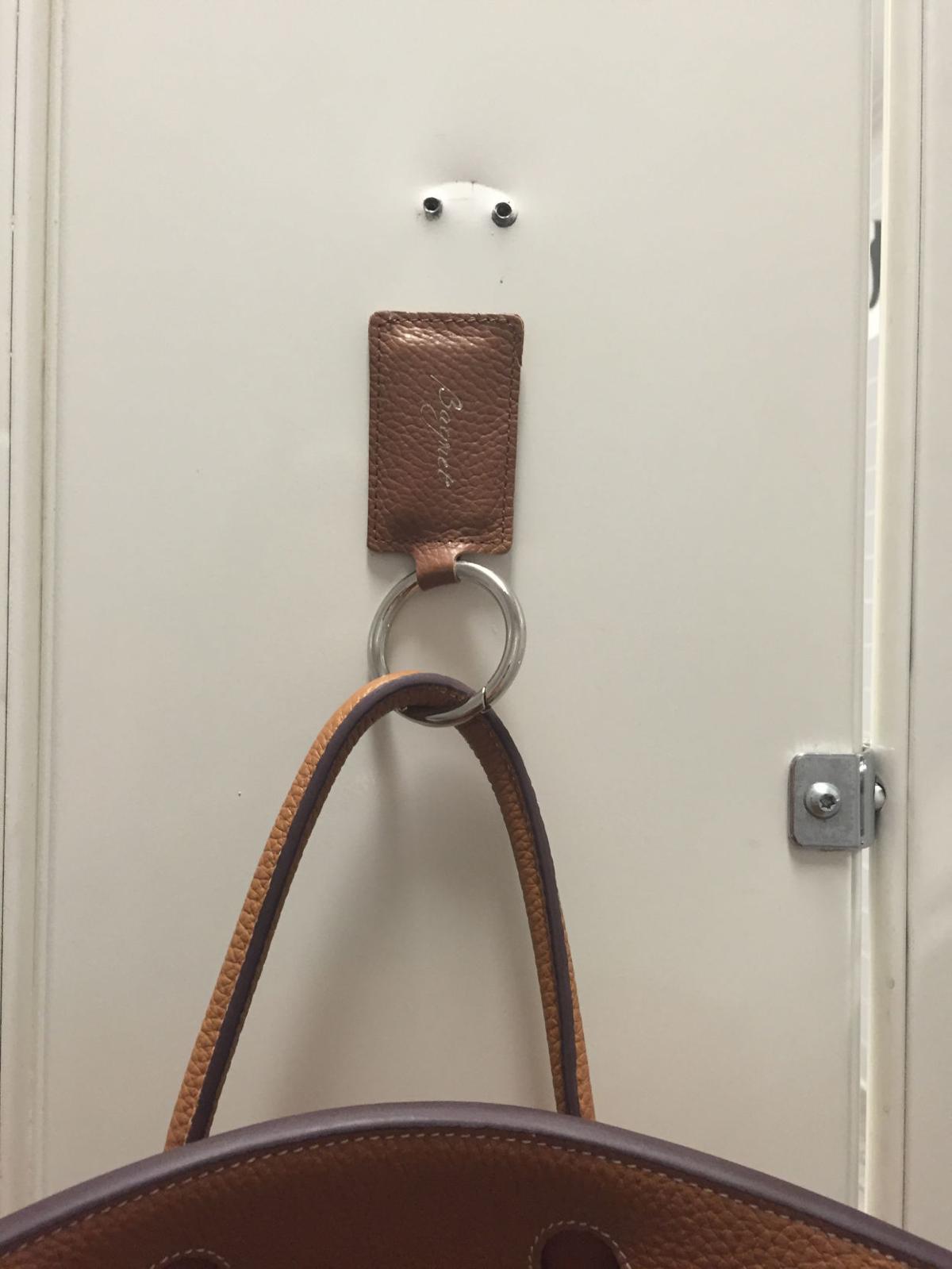 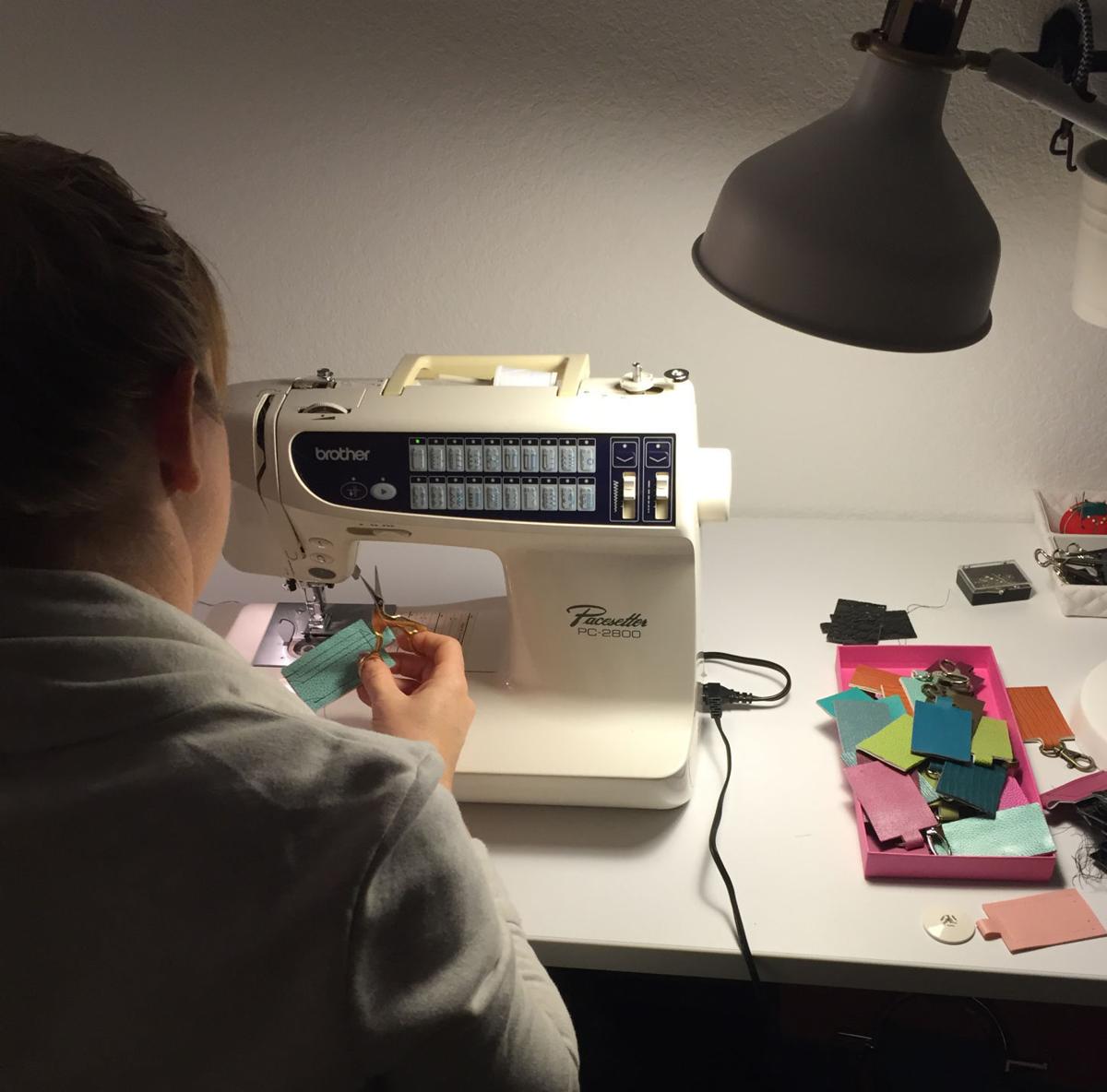 Tired of not having a place to put her purse in public restrooms, Hudson Falls native Kelley Daring created Bagnet, a magnetic tab that attaches to purses.

A public restroom floor has about 2 million bacteria per square inch — much of which, studies show, are from fecal matter.

So, when Kelley Daring stopped to use three separate restrooms on a busy day of running errands and none of them had a hook where she could hang her purse, she was frustrated.

“It’s always been a huge pet peeve,” she said. “I want to take 60 seconds to unburden my hands. I thought for years and years, ‘When is somebody going to come up with a solution for this problem?’”

So, with her mother’s old sewing machine, she created Bagnet, a powerful magnet that attaches to purses so they can be hung on a metal stall door or wall.

Daring, a Hudson Falls native who lives and works in Sacramento, California, worked days in sales for a commercial furniture company and spent nights building Bagnet into a company.

“I’d work all day at my day job, then most evenings, I’d have my trusty laptop, sitting on the couch with my husband. He’d be watching TV and I’d be working away,” she said.

She researched patents (there is a patent pending on Bagnet), materials and manufacturing. On weekends, she set up booths at craft and street fairs.

“I sold lots of units, but I was also doing market research and generating proof of concept,” she said. “I needed to know it’s something women wanted, that they liked it and knew they would use it.”

Bagnet was a hit, and before long, Daring left her day job to focus on her invention.

Daring set up a website (bagnetcompany.com) and found a company to make the purse hangers.

“I no longer have to make them, which is so great because that was such a huge timepiece for me,” she said, estimating she made at least 1,500 of the items herself.

At first, Daring was focused on intellectual property, selling the Bagnet idea and getting paid for it. But after attending a seminar in Las Vegas in August, she decided instead to pursue wholesaling.

After graduating from what was then Adirondack Community College in 2000, Daring packed up with a friend and moved to California, where she earned a degree in interior design from Sacramento State. She landed the furniture company job straight out of college and worked there until October.

“I had no idea this was coming. I had no idea it would be so successful,” she said. “Every day is really exciting for me, because it’s all something I’ve never done before.”

Rhonda Triller is features editor at The Post-Star. She can be reached via email at rtriller@poststar.com. Read her blog, The Arts Life, at poststar.com/blogs/the_arts_life.

Bagnet — created by Hudson Falls native Kelley Daring — is available at bagnetcompany.com. Daring hopes the product, which is available in several colors and materials, will be sold in boutiques in the future.

The magnetic device, which attaches to purses so they can be hung on doors, tables, chairs and the like, cost $25, but the website offers 20 percent off deals regularly.

Kelley Daring, left, at back, created Bagnet, a magnetic device that attaches to the strap or hardware of a purse, then brought her product to craft and street fairs to gauge women’s reactions.

Tired of not having a place to put her purse in public restrooms, Hudson Falls native Kelley Daring created Bagnet, a magnetic tab that attaches to purses. 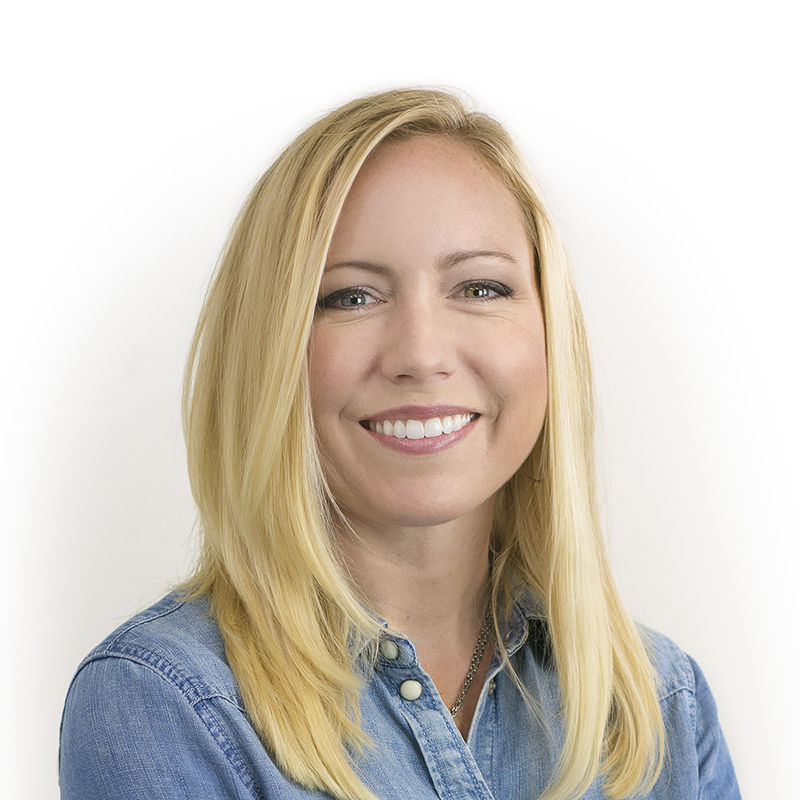