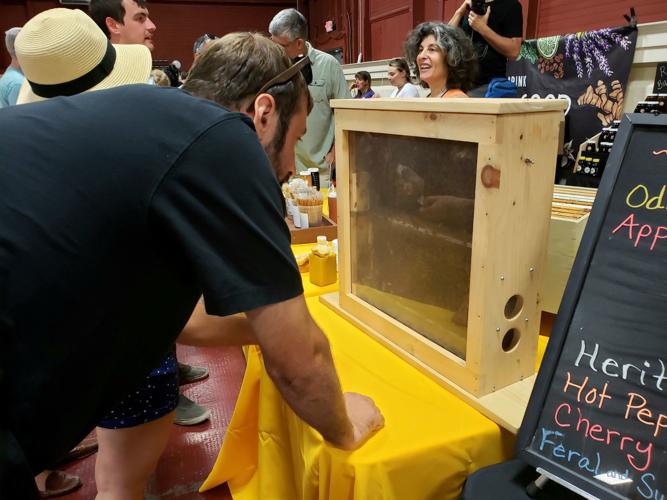 New beekeeper and Glenville resident Tyler Zepf checks out a section of a hive at the  the first Sweet Bee's Honey Festival in the Adirondacks on Sunday. Zepf said he was there to check out products but also get tips from other keepers with more experience. 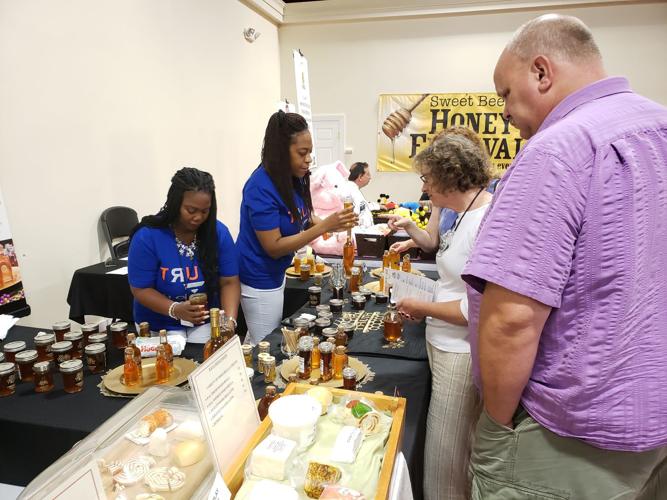 Dior Davis, left, and Lashondra Hughes of Truth Honey dole out samples of their products at the first Sweet Bee's Honey Festival in the Adirondacks on Sunday.

LAKE GEORGE — Residents and vendors from all over the Capital Region and Adirondacks attended the Sweet Bee’s Honey Festival in Lake George on Sunday.

The main organizer of the event Marvin Baum said this is the first time the festival has been held in the upstate and the purpose behind it was multifaceted.

“The whole idea is to make people aware of honey. Often what you get from the store is imported from China or India and can have other sugars added,” Baum said. “These are local beekeepers from New York State.”

Baum said they have held others in Monroe and Hempstead, NY. Baum said he wanted to try the Adirondacks because it was beautiful and reminds of his summer trips to the area.

Baum said having a historic tie to the setting is also something he looks for, which made Fort William Henry an ideal location. He said his events are also meant to raise awareness of local attractions and generate more interest in history.

The event, originally planned to take place on the lawn, was moved inside due to the excessive heat, according to Baum. He said not only was it very hot for guests, but many of the products such as cheese and chocolates would melt if the event had stayed outdoors.

Baum said the honey festival is in a way an outgrowth of a 35th anniversary of Woodstock celebration he helped organize 15 years ago. Through that process, he was able to make connections with local and regional vendors and create a network for specialty events.

He said he expected the attendance Sunday to be somewhere between 1,500 and 2,500 people. In addition to vendors, there was live music from The Roues Brothers, line dancing, crafts activities for children and tickets also included access to Fort William Henry.

Glenville resident Tyler Zepf said was excited for the festival and drove up specifically for the event in hopes of gaining some knowledge about his newest hobby.

“I’m a new beekeeper so I wanted to come get info on different products that can be made and get tips from people who have been doing it for a while,” Zepf said. “I’m collecting info from any source I can.”

Zepf said he keeps bees mostly as a hobby, but ideally he would like to make some money from the process so that it eventually can pay for itself.

He said he had already spoken to other keepers who said they had similar problems over the winter with keeping their hives alive and he was relieved to know it wasn’t necessarily a mistake he made.

“It went the same for a lot of other keepers, so at least I know I’m on the right track,” Zepf said.

Susan Wolf, co-founder of Monroe, NY based Adi’s Bees, brought along a live section of a hive to put on display in a large case with glass to see inside. The box contained a brood frame, where eggs in a hive are laid, with primarily worker bees and drones, but also a queen.

Wolf said she started because her son heard bees populations were dying off and wanted to get involved. She said in her honey there were no ingredients added and the different varieties and flavors were the result of which species of flower the bees harvested.

Another honey vendor, Truth Honey, made the trip all the way from Atlanta to attend and show off their products. President of Truth Honey Dior Davis said her company tries to get to as many honey festivals as they can all across the country and they have worked with Marvin on several of his events in the past.

Davis said Truth produces 44 different flavors and multiple kinds for different purposes, with one of their most popular being grilling marinades in flavors such as jerk chicken and mesquite.

Baum said this festival is also an attempt to gauge interest for planning other events in the area in the future and he still has many connections in the music industry from the original Woodstock celebration he planned.

“We’re here to test out the market,” Baum said. “We want to see what the response is from people and see if this is something we can really grow and develop.”

GLENS FALLS — Light rain didn't stop crowds from making their way through the LARAC Arts Festival Sunday afternoon at the 48th edition of the event.

GLENS FALLS — On Saturday, a small crew fine-tuned corners and angles while building the set for the first show of the Adirondack Theatre Fest…

Report: Video games seems to have an unbelievable effect on kids' IQ

Report: Video games seems to have an unbelievable effect on kids' IQ

New beekeeper and Glenville resident Tyler Zepf checks out a section of a hive at the  the first Sweet Bee's Honey Festival in the Adirondacks on Sunday. Zepf said he was there to check out products but also get tips from other keepers with more experience.

Dior Davis, left, and Lashondra Hughes of Truth Honey dole out samples of their products at the first Sweet Bee's Honey Festival in the Adirondacks on Sunday.