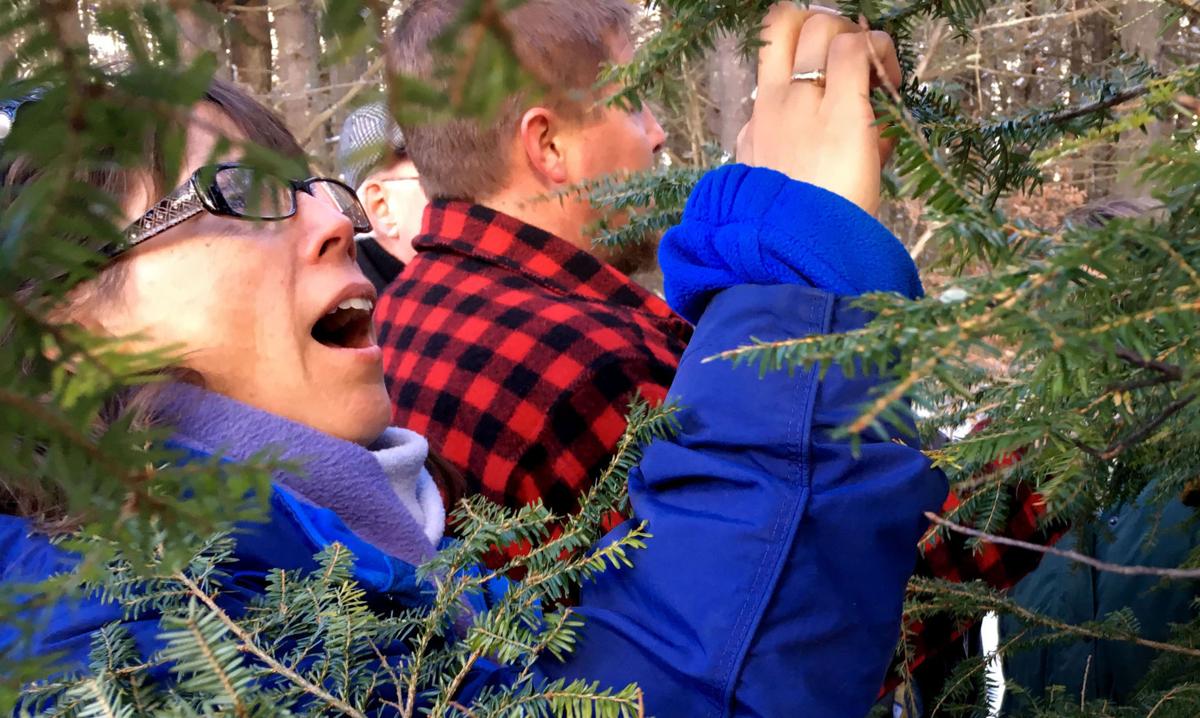 Lynn Haggerty, of Glens Falls, checks the underside of hemlock branches to learn what uninfected trees look like Saturday in Warrensburg. She plans to bring a magnifying glass on hikes this summer so she can look for the Hemlock Wooly Adelgid. 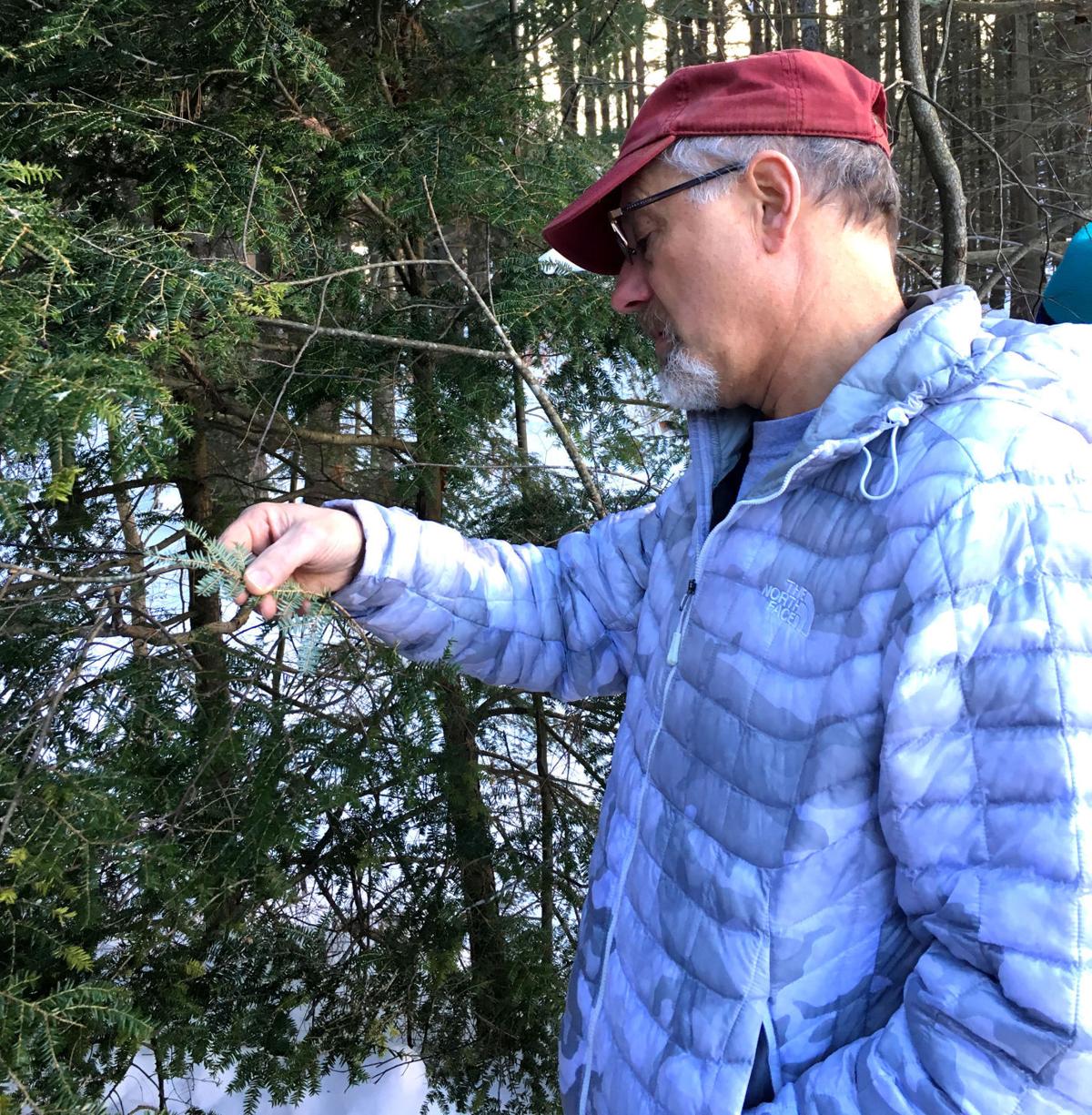 Hiker Todd Earl of Lake George looks at hemlock trees Saturday in Warrensburg to learn what to watch for in infected trees.

There’s a new invasive species to worry about, and researchers want to enlist hunters and hikers to help them look for it.

It’s called the Hemlock Wooly Adelgid, and it kills hemlocks. In the Blue Ridge Parkway and the Shenandoah National Park, where infestations have gone on for years, more than 80 percent of the hemlocks have now died, according to the National Park Service.

In the north, this is bad for the deer, which shelter under hemlocks in winter and eat the needles, said Cornell Cooperative Extension community educator Dan Carusone at an educational event held Saturday at the Warrensburg DEC office.

But the insect’s depredations could have a much bigger impact locally than just on the environment.

“Half the pulp going to IP and Finch Pruyn are hemlock,” said Carusone, who also noted that many people harvest and transport that lumber. “That is a lot of jobs at stake.”

Hemlock Wooly Adelgid, which is native to Japan, was found in the Adirondack Park for the first time last summer. The tiny insect has been slowly moving northward along the coast for many years, but was previously believed to be 50 miles away from the Adirondacks.

For now, DEC workers hope they have killed the insect with targeted insecticide sprayed onto the bark of the infected trees and ones in the vicinity. Only three trees, on Prospect Mountain in Lake George, were found to be infected. Survey teams tried to check every tree in a 1,000-foot by 1,000-foot square around the infected area, and then walked a line five miles from the infestation in search of the insects. Outside of the three infected trees, which were near each other, no other infestation was found.

The bark of trees in the infected area was treated with a combination of two insecticides — imidacloprid, which works well but is so slow that it can’t save trees that are already badly infected, and dinotefuran, which works quickly but could endanger bees.

“We are trying to nip this in the bud here. Hopefully, this is an isolated incident,” said DEC supervising forester Ben Thomas.

Workers carefully sprayed a fine mist directly onto the tree bark to minimize exposure to the rest of the environment.

“It’s used on the hemlock, where you don’t have pollinators (like bees),” Thomas said. “Luckily, in the hemlock stands, underneath there’s nothing because it’s so shaded.”

But individual trees can be planted near flowers, which would make the insecticide more risky if it were used there.

So workers are trying to build up a better defense for the future: predatory bugs. A fly and a beetle that mainly eat the Hemlock Wooly Adelgid are being “reared” in the Northeast, in hopes of releasing them to eat up the insect and save the trees. Targeted releases throughout New England and New York began in 2007, but the bugs struggle to build large colonies in cold weather and need to find enough Hemlock Wooly Adelgids to live on, which is a delicate balancing act.

Locally, officials are also spreading the news about the insect and asking people to be on the lookout. On Saturday, those who attended the event went on a short walk to nearby hemlocks to learn what normal needles and branches look like. Sap dripping from pines can mimic the insects, to the inexperienced eye, and some can be fooled by the small brown buds of new needles.

But the insect itself is far tinier than new buds. Without a magnifying glass, it would look like many black specks on the underside of a hemlock branch.

SUNY-ESF has created a website and a mobile app, iMapInvasives Mobile, so hikers and hunters can upload photos and exact locations for any possible invasive species they see.

“The more information we have, it’s easier for us to make decisions: What techniques are we going to employ?” said graduate student Eric Sage, who was also at the event. “Our biggest problem is a lack of data.”

At first, those who attended the event were a bit intimidated by identifying the Hemlock Wooly Adelgid. They noticed the brown buds of needles looked exactly like what they expected the insect to look like.

But presenters explained the insects are much smaller than the buds.

Hikers left with a plan for their search.

She plans to get one before her next hike.

Looking back at local history: Dec. 17

Take a look back at local history. Here are the top stories for Dec. 17 from one, five and 10 years ago.

Lynn Haggerty, of Glens Falls, checks the underside of hemlock branches to learn what uninfected trees look like Saturday in Warrensburg. She plans to bring a magnifying glass on hikes this summer so she can look for the Hemlock Wooly Adelgid.

Hiker Todd Earl of Lake George looks at hemlock trees Saturday in Warrensburg to learn what to watch for in infected trees.