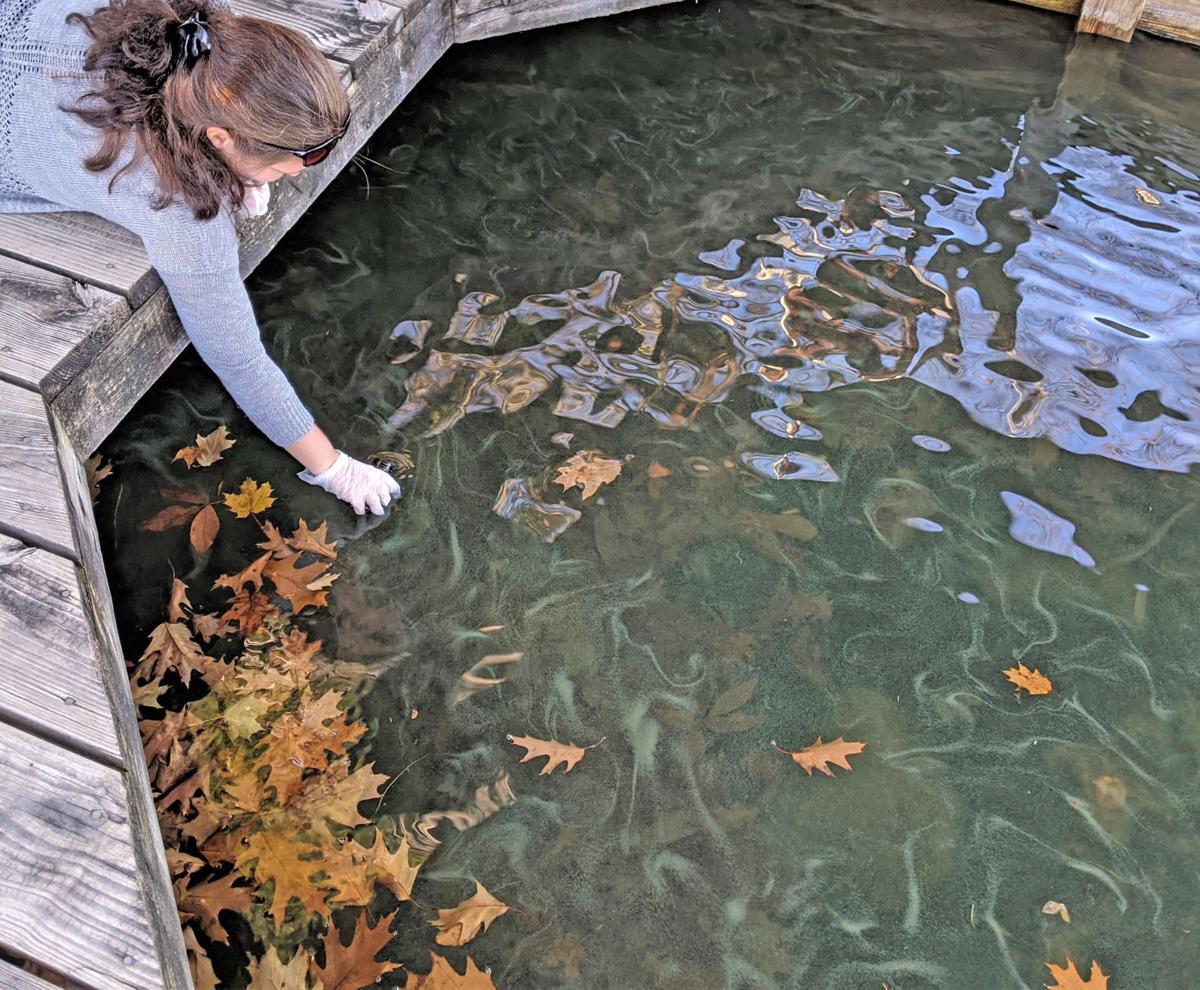 Kristen Wilde, director of education for the Lake George Association, takes a water sample of the active harmful algal bloom, seen at the bottom of the photo as streaks in the water. 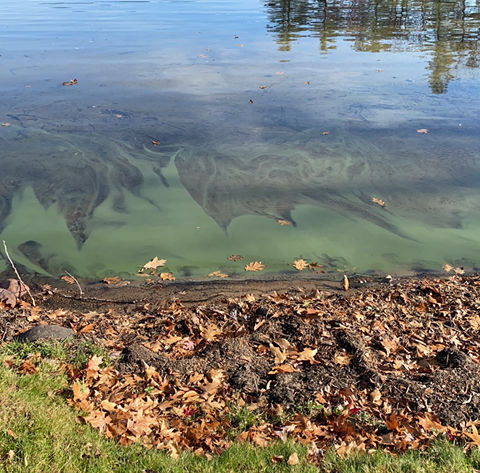 The state Department of Environmental Conservation confirmed the first ever harmful algal bloom in Lake George this past weekend in Harris Bay. The bloom has since dissipated but traces can be found throughout the southern basin. 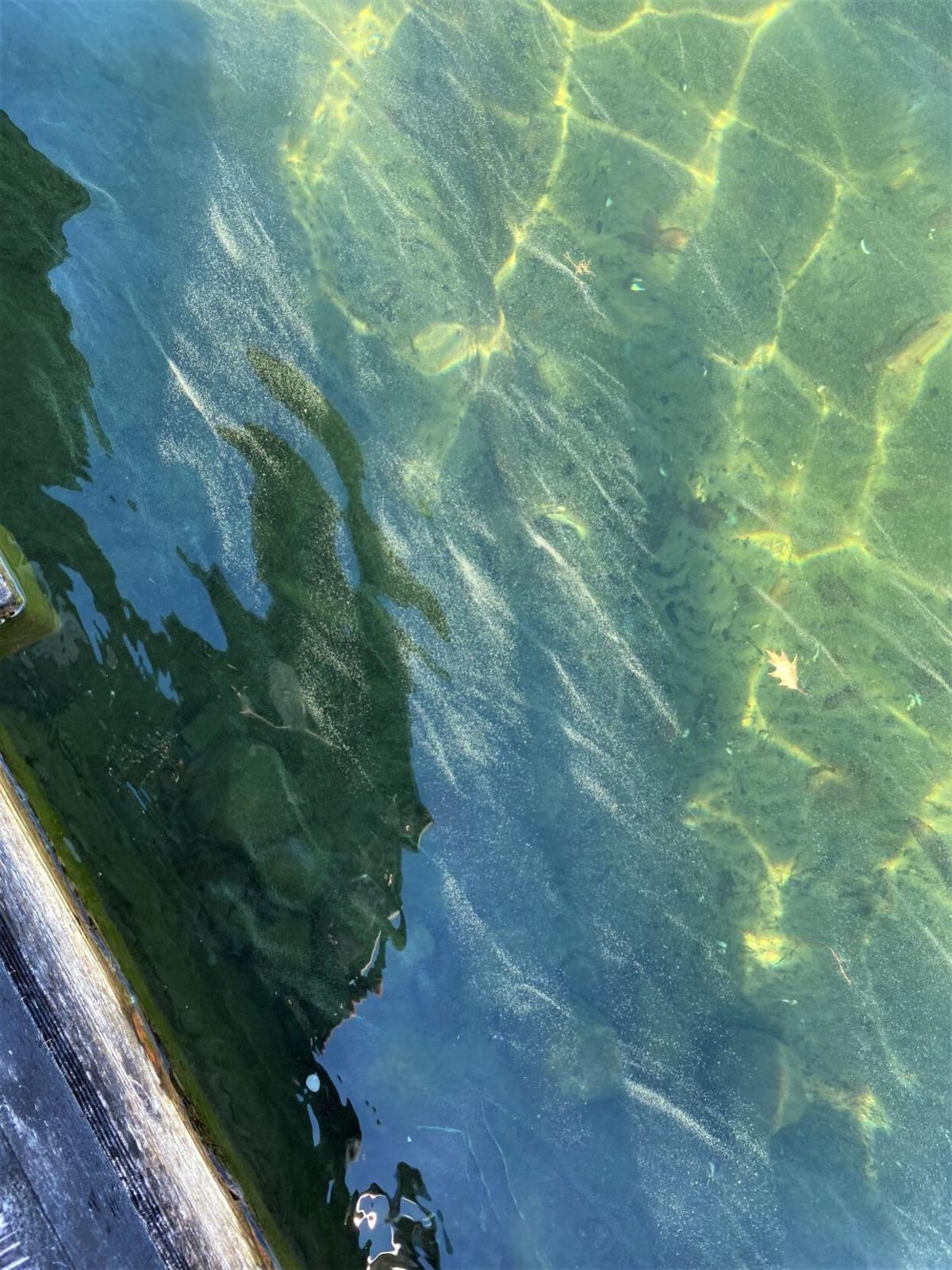 Streaks of cyanobacteria are seen on the top of Lake George as observed off Assembly Point.

LAKE GEORGE — A harmful algal bloom was discovered in Lake George for the first time this past weekend, sparking concerns about the number of nutrients entering the lake.

The bloom was discovered along the shore of Harris Bay on Saturday by Kristen Wilde, the education director for the Lake George Association, a nonprofit organization that works to preserve the lake’s water quality.

The state’s Department of Environmental Conservation confirmed the bloom on Sunday, but said there was no immediate threat to residents’ drinking water. The department is continuing to test collected water samples and monitor the condition of the lake.

“While there is no concern related to public drinking water regarding this bloom, the New York State Department of Health reminds residents to never drink untreated surface water,” the department said in a statement.

The bloom — which is made up of cyanobacteria, or green and blue algae — had dissipated by Sunday but traces were present in various parts of the lake’s southern basin on Tuesday due to the lake’s current, said Walt Lender, executive director of the Lake George Association.

Editor’s note: This article is the first in an occasional series on harmful algal blooms aff…

“It’s spread out quite a bit, but it’s showing up in several different locations in the southern part of the lake,” he said.

There’s no evidence of the bloom in northern portions of the lake.

Algal blooms can produce toxins that are harmful to animals and humans and degrade water quality, according to the DEC.

In places like Lake George, a tourist-dependent community, the blooms could also disrupt recreational activity, negatively impacting the local economy.

The blooms are likely caused by a combination of conditions, including excess nutrients, lots of sunlight, low-water or low-flow conditions, calm water and warm temperatures.

Harmful algal blooms have cropped up in waterways across New York in recent years, including Lake Cayuga in the Finger Lakes and Lake Champlain in Essex County.

Lender said it’s unclear what triggered the bloom in Lake George, but added the unseasonably warm temperatures may have played a factor. He’s hoping testing will reveal some answers and determine just how widespread the issue is.

Efforts to prevent nutrients — including those found in fertilizer and leaky septic systems — from entering the lake have been made in recent years, but Lender said the bloom shows that there is more to be done.

“By all opinions, the fact that there are enough nutrients to fuel it is alarming,” he said.

The regulations reduce the requirement for stormwater infiltration devices to be installed from 100 feet to 35 feet and bans fertilizer from being used on properties within 50 feet of a wetland or body of water in the Lake George Park, among other things.

Lender said the new guidelines will help reduce issues facing the lake, but said there is more work to be done on the individual level to protect the lake going forward.

“I hope people will pay attention and realize that we are not exempt. We are also susceptible to harmful algal blooms just like many other lakes in the state,” he said.

Meanwhile, organizations like the Lake George Association and the Fund for Lake George have worked to encourage property owners in the basin to retrofit their properties by upgrading aging sewer systems and installing rain gardens to prevent runoff.

On Tuesday, the organization announced it had deployed resources from the Jefferson Project, its research collaboration with IBM and Rensselaer Polytechnic Institute, to Harris Bay in order to collect data that might provide information as to what caused the bloom.

The Jefferson Project uses a series of monitors throughout the Lake George basin to collect data on everything from air temperature, water pH and nutrient levels in the lake.

“This is a full-scale, all-out deployment of the Jefferson Project’s most powerful assets and people who are going to work to understand the bloom with an eye toward preventing future occurrences,” said Eric Siy, the Fund’s executive director.

Siy said the data collected will provide vital understanding of what may have caused the bloom and inform important decisions on how to further protect the lake going forward.

“This is a new day with new challenges, but clear opportunities to safeguard the state of Lake George,” he said.

Researchers from the Jefferson Project continue to analyze samples collected after a harmful algal bloom was discovered on Lake George last month.

A proposal near Lake George has been amended after substantial community opposition.

A coalition wants Gov. Andrew Cuomo to implement a septic system inspections program after an algal bloom was found in Lake George.

Kristen Wilde, director of education for the Lake George Association, takes a water sample of the active harmful algal bloom, seen at the bottom of the photo as streaks in the water.

The state Department of Environmental Conservation confirmed the first ever harmful algal bloom in Lake George this past weekend in Harris Bay. The bloom has since dissipated but traces can be found throughout the southern basin.

Streaks of cyanobacteria are seen on the top of Lake George as observed off Assembly Point.