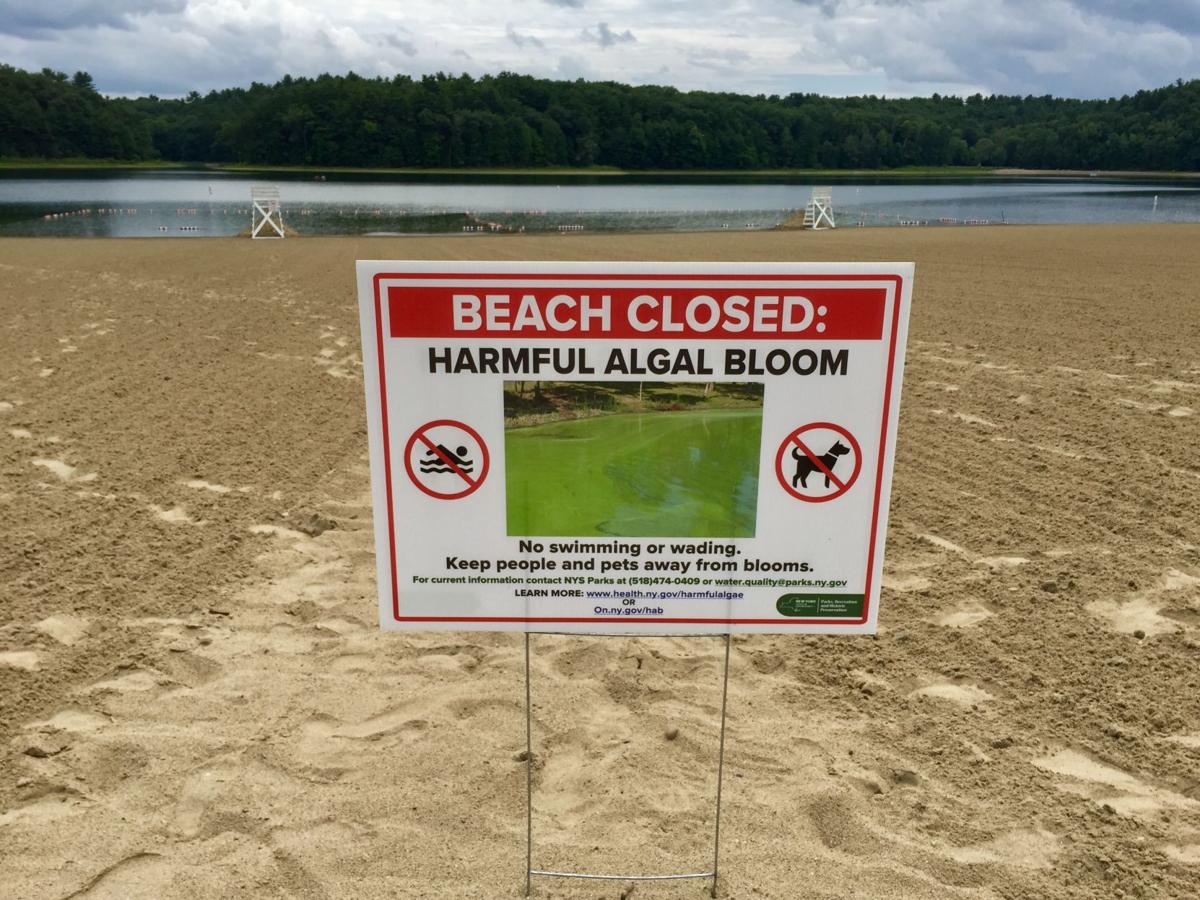 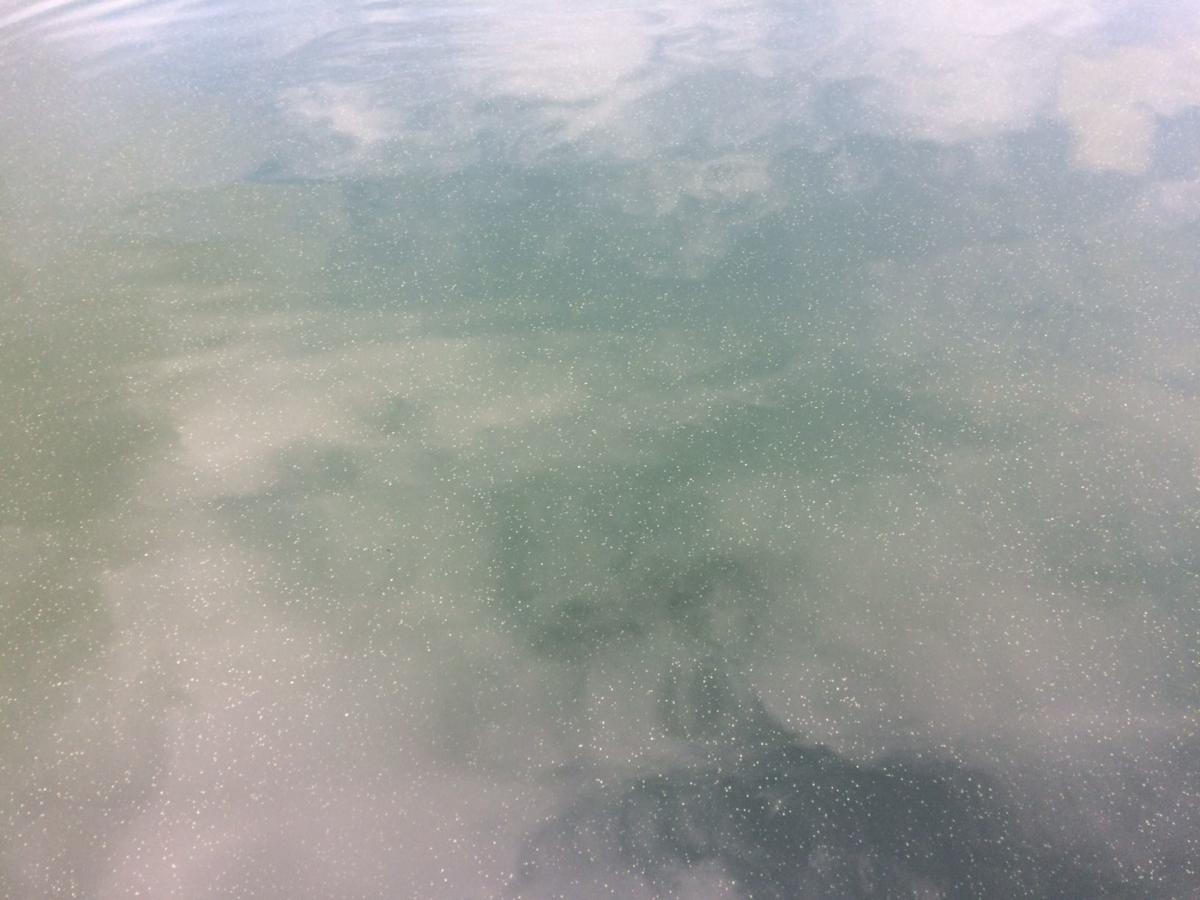 A photo of a suspicious harmful algal bloom on Moreau Lake is seen. The photo and observation was reported to the state Department of Environmental Conservation at noon on Friday, Aug. 16.

MOREAU — Moreau Lake State Park’s beach is closed to swimming as of Tuesday due to a harmful algal bloom, the state Parks, Recreation and Historic Preservation Department said in a news release.

A bloom was observed Friday in another part of the lake, but the park had kept the swimming area open over the weekend.

The Parks Department said the beach closure Tuesday was “precautionary to protect the health and safety of swimmers.” Boating is still allowed, but fishing is not recommended.

The state Health Department stipulates that for a beach to reopen, the beach must be free of any signs of a harmful algal bloom for 24 hours, and a water sample must be submitted for a toxin analysis.

Some harmful algal blooms, which are actually a kind of bacteria, produce liver toxins and neurotoxins. These are dangerous to people, but even more so to dogs, as dogs tend to consume more water and lick their fur.

Two dogs died in July in Vermont from consuming toxins from a harmful algal bloom.

The state Parks Department has warned the public on the Moreau Lake State Park Facebook page to keep dogs out of the lake.

The DEC and Parks Department are partnering with the U.S. Geological Survey on a couple of different projects that could help determine why these blooms are occurring.

Jennifer Graham, a scientist with the USGS, said one involves creating a management plan that could help decide the best mitigation efforts for harmful algal blooms on the lake.

“The reason we wanted to take this approach overall is because decisions in natural resources are surrounded by complexity,” Graham said. “It’s not straightforward or simple.”

Graham’s colleague, hydrologist Paul Heisig, is looking at Moreau Lake from a different point of view.

In 2015 and 2016, Heisig said, people were seeing unprecedented low lake levels, which were compressing the swimming area. So, Heisig began studying the water levels in the aquifer.

Originally, his five-year study had nothing to do with harmful algal blooms, but now it may.

A report called, "An Investigation into the Water-Surface Elevation Changes of Moreau Lake," by the U.S. Geological Survey.

In 2015 and 2016 Moreau Lake was seeing extreme low levels, but now Heisig recorded a six-foot rise between October last year, and June this year. It’s a huge rise for the lake.

Heisig thinks the extremes have to do with the nearby mountain range, which contributes runoff and snow melt into the lake. Much of the lake’s level is impacted by precipitation and runoff in the cold season, when plants aren’t drinking up the water, Heisig explained.

Besides what you see at the surface, Heisig is looking at where water is going below ground, too. Groundwater is discharging to the east, he said.

“I’m tracing how water is actually moving from the mountainside of the lake,” Heisig said. “If you’re going to understand what’s causing a harmful algal bloom event, it’s certainly helpful to understand the lake system and how it operates, and what’s going on under the surface.”

Heisig’s field work will likely wrap up in April before he submits a final report. Graham said the management plan for the lake is in its early stages. It isn’t likely any specific mitigation projects will be in play this year.

In a statement to The Post-Star, the DEC said it “is conducting water quality monitoring in collaboration with State Parks on Moreau Lake in Moreau Lake State Park through the Lake Classification and Inventory (LCI) program. This data is being collected as a baseline before the project begins. Parks is the lead on the project, DEC is playing a support role by providing the necessary resources to collect water quality information.”

To check out the DEC's harmful algal blooms map and learn more, go to dec.ny.gov/chemical/83310.html.

Friends Lake in Chestertown may have the first harmful algal bloom in Warren County this season, according to a notifications map from the sta…

Two suspicious harmful algal blooms have been documented in Washington County this month at Dead Lake in Jackson and in the Champlain Canal in Fort Edward, according to the state Department of Environmental Conservation's notifications map.

The Warren County Soil and Water Conservation District has some interesting water-quality projects underway, and a group of state and local of…

The U.S. Geological Survey, a branch of the Department of the Interior, has created monitoring platforms that include nutrient sensors and oth…

MOREAU — The Moreau Lake State Park beach has reopened because an algal bloom has cleared up.

I'm a little late to report this because I was on vacation, but the state Department of Environmental Conservation reported two confirmed toxi…

A photo of a suspicious harmful algal bloom on Moreau Lake is seen. The photo and observation was reported to the state Department of Environmental Conservation at noon on Friday, Aug. 16.