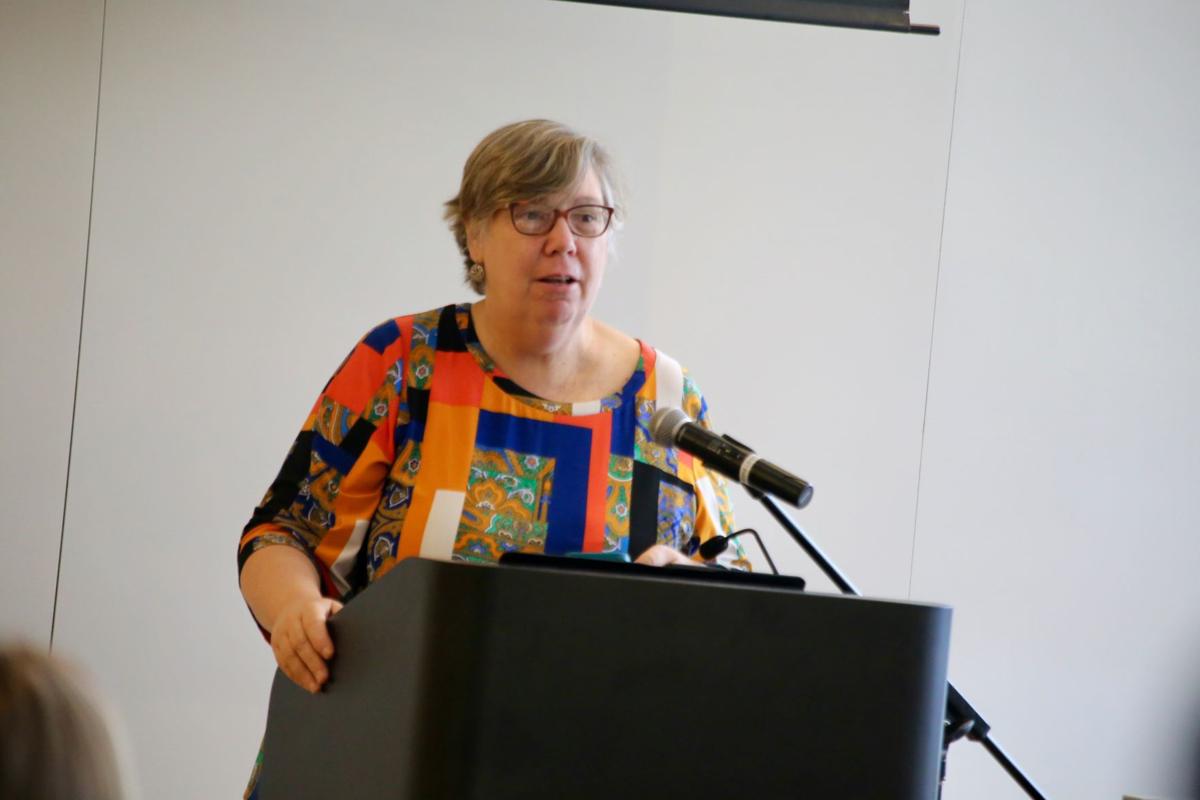 Judith Enck, founder of Beyond Plastics and former regional administrator for the U.S. Environmental Protection Agency, speaks Wednesday during a convention on plastic pollution at Bennington College in Vermont. 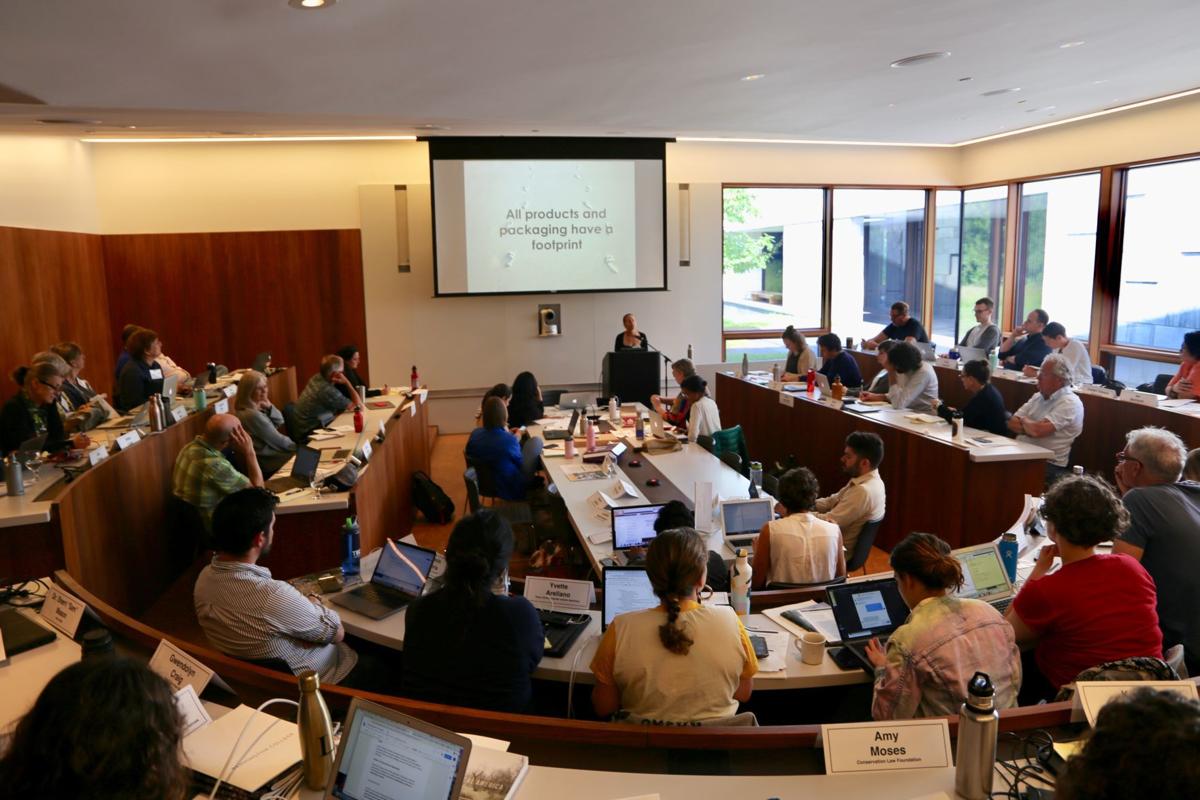 Reporters, lawyers, leaders of nonprofit organizations and scientists gather Wednesday for a convention on plastic pollution at Bennington College in Vermont.

BENNINGTON, Vt. — A new organization founded by a former regional administrator for the U.S. Environmental Protection Agency is working to get communities to scale back their use of plastic, thereby shutting down trash incinerators, reducing plastic pollution in oceans and creating other environmental and public health benefits.

The organization, Beyond Plastics, was started in January by Judith Enck. It is based out of the Center for the Advancement of Public Action at Bennington College in Vermont, and this week held its first plastic pollution convention for reporters across the country.

The three-day conference covered the single-use plastics crisis, its impact on public health, its impacts on freshwater and oceans and how communities can work toward zero-waste solutions.

Between 8 million and 9 million tons of plastic enter the ocean each year, studies show. They don’t “decompose,” but rather break apart over a long period of time into particles, ending up in drinking water and air.

The conference also covered the dangers of burning plastic, with several experts advocating for the closure of waste-to-energy facilities, or trash incinerators.

A grassroots organization in the Glens Falls area called the Clean Air Action Network is looking to shut down the Wheelabrator trash incinerator in Hudson Falls.

“Every incinerator in the country is incredibly polluting and much of the air emissions are not measured,” said Kirstie Pecci, an attorney with the Conservation Law Foundation. “We need to have better reporting.”

One of the biggest health concerns when it comes to burning plastic is the dioxin that gets released into the air. Dioxins are highly toxic and can cause cancer, according to the EPA.

Pecci said dioxins are only measured annually, and often the tests are planned ahead of time.

Members of the Global Alliance for Incinerator Alternatives also spoke at the conference, highlighting that much of the waste sent to incinerators can be composted, recycled or reused.

“They constantly need to be fed, and you need to have a certain amount of waste to be financially successful,” added Miriam Gordon of Upstream Solutions.

That’s why, some of the speakers said, communities are deterred from exploring other solutions to dealing with trash.

Froilan Grate, executive director of the Global Alliance for Incinerator Alternatives in the Philippines, showed how some Asian communities were able to reduce more than 80% of their waste and subsequently close a local trash incinerator.

“Zero waste is not only possible, it is already happening in Asia,” Grate said. “If you’re a mayor and don’t believe people will do this, you shouldn’t be a mayor.”

Cities in the U.S. are moving toward zero waste, too, including Boston, Berkeley and San Francisco.

Enck said she thinks there needs to be more laws and regulations around plastics, including stronger bottle deposit laws, fees on coffee cups and more plastic bag bans.

Anna Cummins, co-founder of the 5 Gyres Institute, a nonprofit organization that also is fighting plastic pollution, said the end goal needs to be zero waste.

“We need to get to reuse,” Cummins said. “It’s going to take us a minute to get there.”

To learn more about Beyond Plastics, go to beyondplastics.org.

I was sitting in Judith Enck's plastic convention last week, when my tummy started rumbling, and I reached into my purse.

I was sitting in Judith Enck’s plastic convention last week when my tummy started rumbling, and I reached into my purse.

Editorial: There has got to be a better way to dispose of garbage

Forced to choose between burning our trash at the Hudson Falls incinerator or disposing of it in a landfill, neither is a good option. Two meetings this week might provide some clarity of how we go forward.

A report called "U.S. Municipal Solid Waste Incinerators: An Industry in Decline," was researched and created by The New School's Tishman Envi…

Ticonderoga is one of 18 municipalities to get funding through the state Health Department’s Lead Service Line Replacement Program, according …

A new pilot program this fall will experiment with closing gates at two Lake George boat launches, according to the state Department of Enviro…

A demonstration plant that recycles waste, including medical and hazardous substances, could be coming to the former EB Metals site off Route 4 in Whitehall.

Judith Enck, founder of Beyond Plastics and former regional administrator for the U.S. Environmental Protection Agency, speaks Wednesday during a convention on plastic pollution at Bennington College in Vermont.

Reporters, lawyers, leaders of nonprofit organizations and scientists gather Wednesday for a convention on plastic pollution at Bennington College in Vermont.